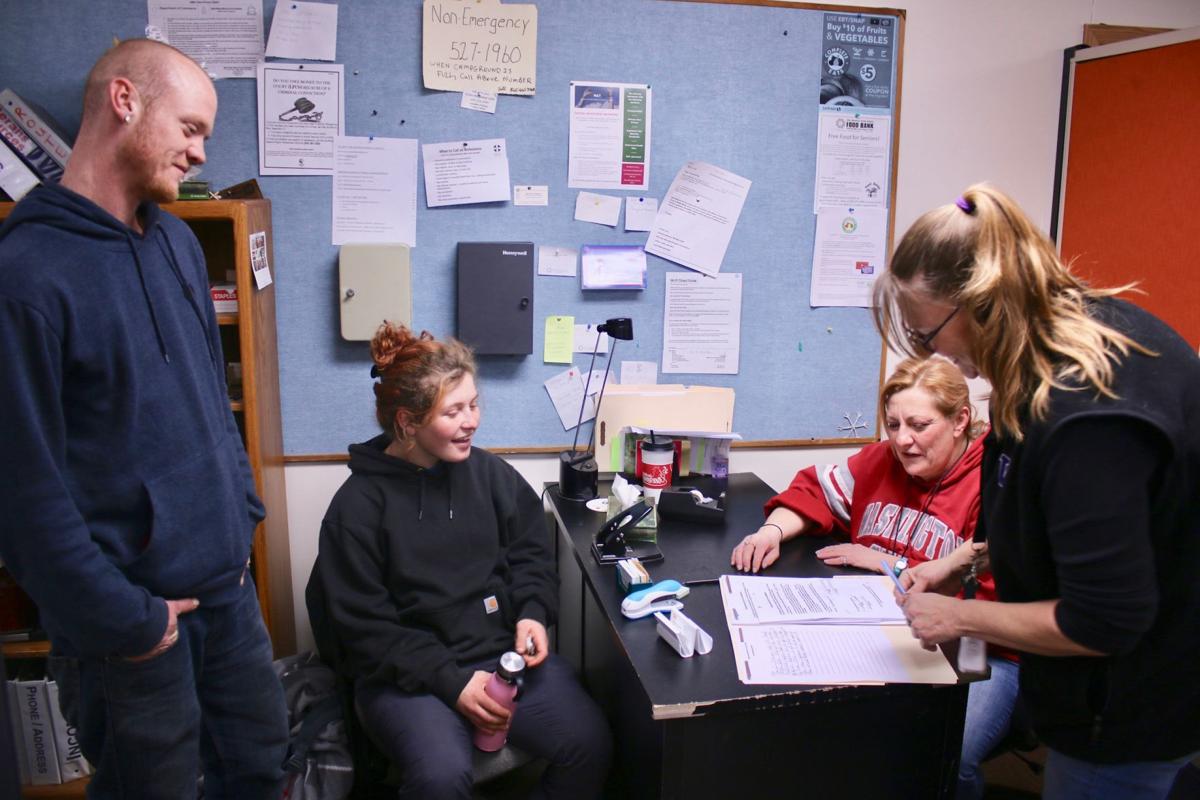 Behind the desk, Erica Bristol, left, and Leanne Fackler work with a couple’s case at the Sleep Center on 15th Avenue and West Rees Avenue. 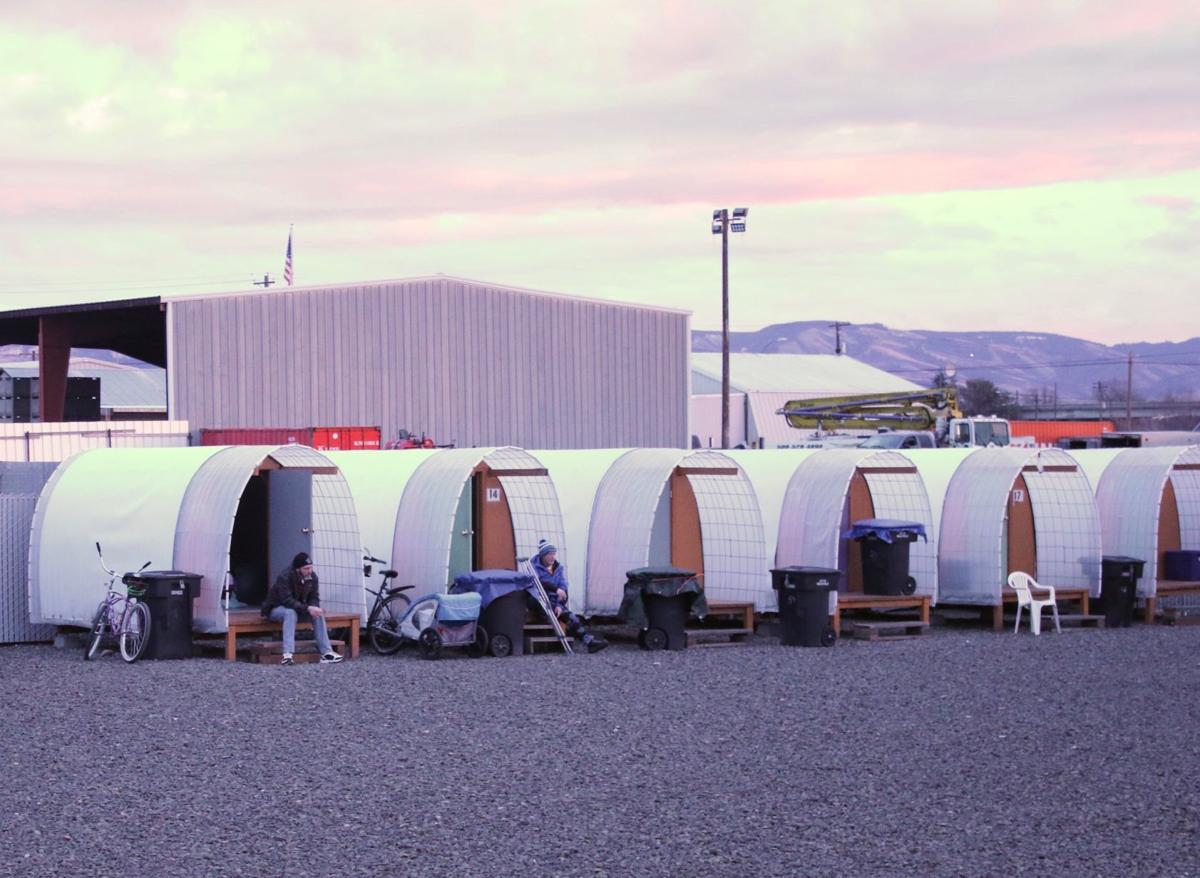 The Sleep Center can shelter over 50 people each night, and those who stay five nights a week, regularly hold their spot so they have a secure and safe place to sleep each night.

Behind the desk, Erica Bristol, left, and Leanne Fackler work with a couple’s case at the Sleep Center on 15th Avenue and West Rees Avenue.

The Sleep Center can shelter over 50 people each night, and those who stay five nights a week, regularly hold their spot so they have a secure and safe place to sleep each night.

As communities struggle with tent cities, Walla Walla is celebrating the success of getting 17 people permanent housing within four months with three more on their way.

At City Council’s work session Monday, city leaders discussed the progress of Walla Walla’s Sleep Center, including its move to Rees Avenue, during an annual review.

Two peer-support specialists and a Blue Mountain Action Council housing specialist were hired to work onsite for providing resources and assistance needed to get the people staying at the city’s Sleep Center housed.

Before the specialists were put onsite, only 10% of the population of the Center was engaged in support services. Now 67% of people staying there are engaged, said Craig Volwiler, vice president of the Alliance for the Homeless, the nonprofit organization that manages the Sleep Center.

The specialists are paid by donations and fundraisers through Walla Walla Alliance for the Homeless and BMAC.

With their help, 23% of people staying at the Center have gotten their identification or Social Security cards, 17% are working part time and 26% have moved into permanent housing, Volwiler said.

“Out of the 17, one is possibly going to be back (to the Center), one has moved and the others are still in the original housing and doing great. So two out of 17 ain’t bad,” said Erica Bristol, a support specialist.

Peer support specialists Leanne Fackler and Bristol have both been homeless and use their experiences to build relationships and trust with their clients.

“I come from the same background,” Fackler said. “I myself have been homeless, addicted, mental health issues as well and service connected disabled. Having experienced those things myself gives me the ability and the opportunity to come alongside the client.”

She said she can empathize with her clients because she knows how hard it is to ask for help.

“I came to Walla Walla two years ago from Spokane; two days sober and homeless,” she said.

Fackler said the city lifted her up, and now this is a way of giving back to the community who helped her get out of homelessness and pursue an associates degree in social services at the Walla Walla Community College.

Bristol said she was 14 when she left her parents’ home, had a career and kids. But briefly, in her adult life, she was homeless.

“It’s all too much, and it’s overwhelming when you have nothing, and so the fact that someone is just willing to go with you to appointments and support you in that, a lot of times is all they need,” Bristol said.

When Bristol started working at the Sleep Center, she didn’t have a car. Her former boss, Dan Clark, helped her acquire a car and let her make payments to him.

“So I started being there in the morning, picking them (clients) up wherever they were, dragging them to appointments personally. Once we got Leanne on, she just got a vehicle and now she’s doing the same thing,” she said.

The specialists helped the woman with getting a prescription for her mental health needs and the man a surgery that he needed.

“He is now running a restaurant out of town. They have a house, she is also working there. He has the option to purchase the restaurant in a year. Life has improved 10,000% for them!” Bristol said.

Fackler and Bristol were both trained for their positions for free from the State Health Department through a week-long program.

They said one of the biggest challenges that homeless people face are the strict rules of landlords.

“Many landlords frown upon anyone who has a felony or if you’re not making three times the rental amount, which is a huge barrier,” Fackler said.

She said they often need financial assistance from other agencies on top of what they receive for Social Security or disability.

“It’s just a matter of working with landlords and getting landlords that are willing to work with our clients and give them a chance,” she said.

The difficulty is a lot of the landlords do not want to rent to homeless people with no rental history or bad rental history, Bristol said.

“Every month there is a meeting between all the services … where they go over housing, who has housing available, what landlords are willing to work with people, who has something available,” she said.

Bristol said she wants the city to find a solution to provide incentives to landlords with tax breaks for those who take someone with rental assistance or who is on food stamps.

She also expressed concern about “slumlords,’’ who accept people with low income with the intent to evict them and take their security deposits and first month’s rent.

“Homelessness is not cheap; it’s very expensive,” said Chuck Hindman, chairman of the Walla Walla Alliance for the Homeless. “If you take the cost of three days in a hospital, three weeks in jail or a year of supportive housing, the costs are about the same.”

He said the most effective method to getting people to create a more positive life is to house them first.

“You provide them a safe place to sleep at night, you provide them adequate housing, their chances of doing the other things they need to do to create a more positive life for themself go way up,” Hindman said.