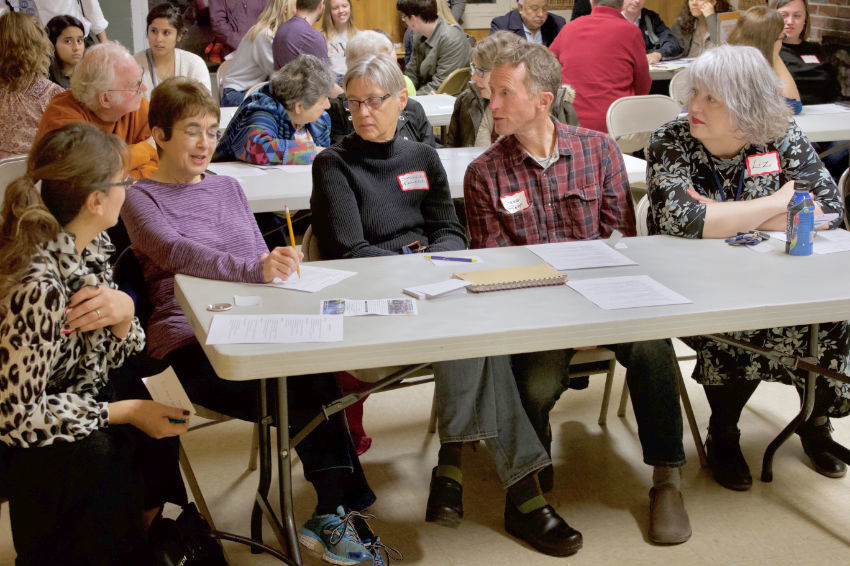 Community members meet in the garden center at Pioneer Park to gather ideas on how to create better, safer neighborhoods. 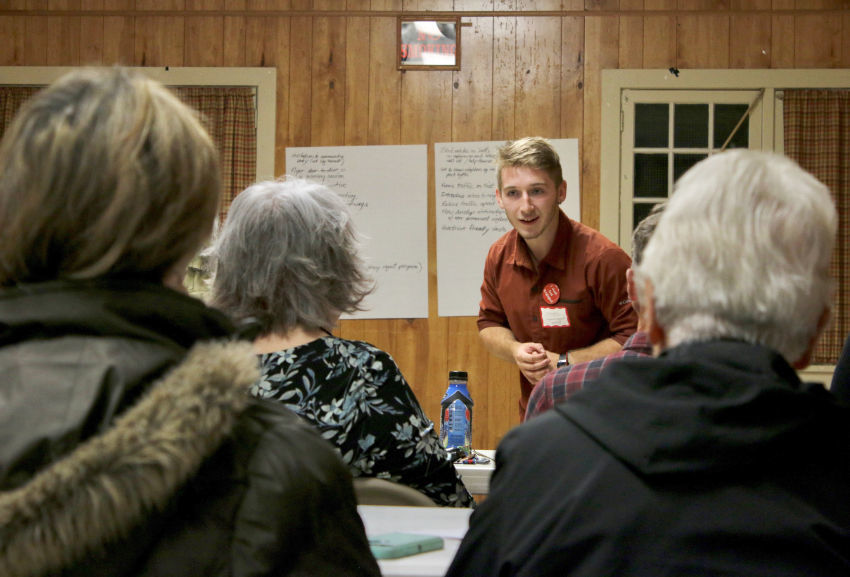 Cameron Connor speaks to the crowd about what resources the city can offer neighborhoods at the first Neighborhood Engagement Program community meeting.

Community members meet in the garden center at Pioneer Park to gather ideas on how to create better, safer neighborhoods.

Cameron Connor speaks to the crowd about what resources the city can offer neighborhoods at the first Neighborhood Engagement Program community meeting.

Forty-six people came together Thursday night at Pioneer Park to discuss how to create better neighborhoods.

The aim of the Neighborhood Engagement Program is to connect neighbors together and provide easier access to Walla Walla’s resources.

Mayor Barbara Clark, City Manager Nabiel Shawa and Whitman College student Cameron Connor decided to take on the project six months ago. The program is looking for people to lead their neighborhoods as participants in one of the three to five “trial neighborhoods,” said Connor, the project coordinator.

He said the neighborhoods will be working with the city to find effective methods to engage in an assortment of projects chosen by neighbors to improve their communities’ well being.

Clark said at the beginning of the meeting, “This project has been very important to me.” She said she used to have a “golden age neighborhood.”

Her neighbors had a party to get to know each other, they all started knocking door to door to get contact information in case of emergencies. With this information, kids had a safe place to go if they left their key inside and had nowhere to go after school, and neighbors could knock on the door if they were not feeling safe walking home at night, Clark said.

The mayor explained that they used to get together to clean up graffiti, plant trees with vouchers from the city and do yard work together. This would allow her to get to know them by working with them.

Connor then addressed the crowd asking, “Why are you here?”

Laurie Manahan said that she came to the meeting because there was a woman in her neighborhood that wanted to garden.

“She didn’t know how to garden, but she wanted to learn,” Manahan said.

One of Monahan’s other neighbors offered her yard to them so that they would have space for the garden and together they started a community garden. The neighborhood had fresh vegetables to eat.

Connor described that a key indicator in Blue Zones is having a network in your community, having a sense of belonging. Blue Zones are “regions in the world where people live much longer than average,” said Connor.

Walla Walla, College Place, Walla Walla University, Adventist Health and Walla Walla County together pitched in $50,000 last winter for an “assessment of community readiness” with the Blue Zones Project, a nonprofit that has sold public health policy guidelines to communities around the country.

Connor told those gathered for the neighborhood meeting Thursday that was there to connect the community to resources whether it be coaching for facilitating meetings, offering community spaces for people to gather in, promoting or publicizing events and assisting in the navigation of city government and who to talk to.

He said he will even “come knock on doors with you.”

The community members got into teams to workshop ideas, meet each other, and share their concerns.

Mitz Rodriguez brought up an issue in her neighborhood that the block of Edison Elementary School and Pioneer Park gets a lot of congestion and traffic. She says, “It is unsafe for kids to walk around and play during the day.”

The community started to discuss their ideas of how to create a safer environment. Ted Koehler mentioned his neighborhood would all turn their porch lights on every night to create a safer place for walking at night.

Liz Jessee, the Walla Walla County Emergency Management director, introduced a program called Map Your Neighborhood, which gives a step-by-step guide on how to prepare a neighborhood for a disaster. This includes drawing out the locations of neighbors, listing contacts and collecting information on everyone’s skills, equipment and needs.

More discussion occurred, and they all decided it would be best to start by inviting neighbors to a meet-and-greet gathering by knocking door to door in a group with flyers. Some suggestions for an event were a cookie decorating party or pumpkin carving party in the garage.

There will be another meeting for the Neighborhood Engagement Program in the coming weeks, but for now attendees will be brainstorming, meeting neighbors and discussing how to approach the project.