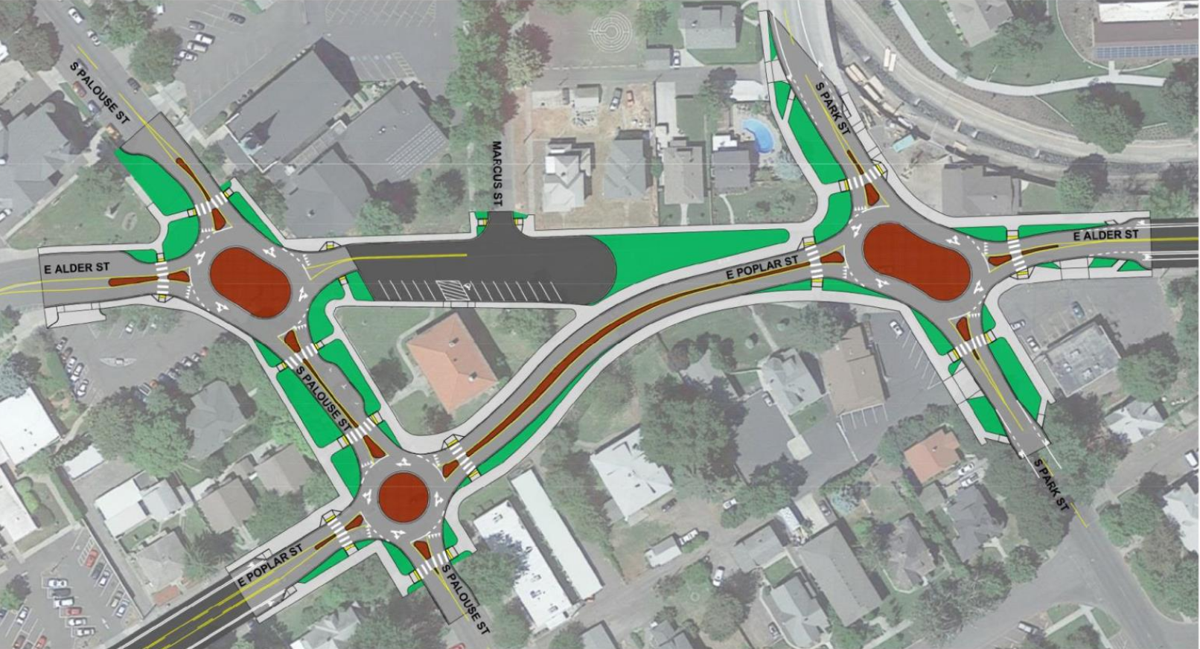 The city of Walla Walla is offering a virtual open house to learn about a proposed reconstruction project on Poplar, Alder and Palouse streets.

The proposal could replace the dated street lights on Poplar and Alder streets at Palouse and Park streets with roundabouts, city officials describe. It could also remove some of the other potentially unnecessary lights on Poplar at First, Third and Fourth avenues in a multi-phase $7.6 million project.

“Basically what we are talking about is really improving the transportation corridor on Alder and Poplar from Merriam to Colville on this section,” City Manager Nabiel Shawa said in an open house video posted Wednesday.

Five display boards on the city’s website provide information about various aspects of the “Alder/Poplar Transportation Benefit District Project” and include accompanying videos where engineers explain what is shown on the boards.

Roundabouts and enhanced pedestrian crossings are critical components of the design, particularly based on fatal collisions with pedestrians, the presentation says.

The primary funding source, city Engineer Monty Puymon says in the series, is the city’s Transportation Benefit District’s .2% sales tax. He said grant applications have also been submitted in pursuit of a portion of the funding from Fifth Avenue to Colville Street with a construction goal for that stretch of 2022.

That portion of the timelime is grant-dependent. Timelines on the other portions are yet to be determined, depending on funding sources not yet identified.

“Poplar Street is one of the highest crash corridors in the city of Walla Walla. The recent safety data showed that there was two severe and fatal pedestrian crashes along the corridor,” said Scott Mansur, a project engineer with transportation planning and engineering firm DKS Associates in one of the open house videos.

A corridor study was recently completed on Poplar Street from Myra Road to the Alder Street/Merriam Street intersection.

The study was proposed to analyze traffic patterns and develop recommendations for a roadway configuration that will best accommodate the anticipated future traffic volumes, while addressing safety for all other users of the roadway, according to the Go Walla Walla Poplar Corridor Study description.

The study identified the improvements needed to meet the city’s future transportation needs of the corridor while meeting the city’s Urban Comprehensive Plan guidance, according to a release.

The study aimed to improve multimodal facilities and safety, as well as support the area’s businesses, encourage the neighborhood’s vitality and foster well-informed community support for the project.

The city encouraged participation from the community throughout the study. The project team took public input in various forms as well.

Three potential alternatives for the Poplar Street corridor were identified. Each alternative included a reduction of travel lanes on Poplar Street, safety improvements and various forms of improved bicycle and pedestrian facilities, according to a release.

“After analyzing the operations of each alternative and performing multiple rounds of public involvement, Alternative 1 was recommended and approved by the City Council on Feb. 27, 2019,” according to the release. “This design includes a three-lane cross-section, with buffered bike lanes, parking where width allows and wider sidewalks.”

Those who visit the open house will be able to share their thoughts with the city’s Engineering Division. City engineers, along with transportation engineers with DKS Associates and civil engineers with Anderson Perry & Associates, will consider the public’s feedback as they move forward.

The open house will be available through June 2020.

“We encourage you to stick with this virtual open house, participate in it and continue giving us the feedback that we need so we can deliver the project that you really want to see and that’s going to improve our quality of life,” Shawa said.