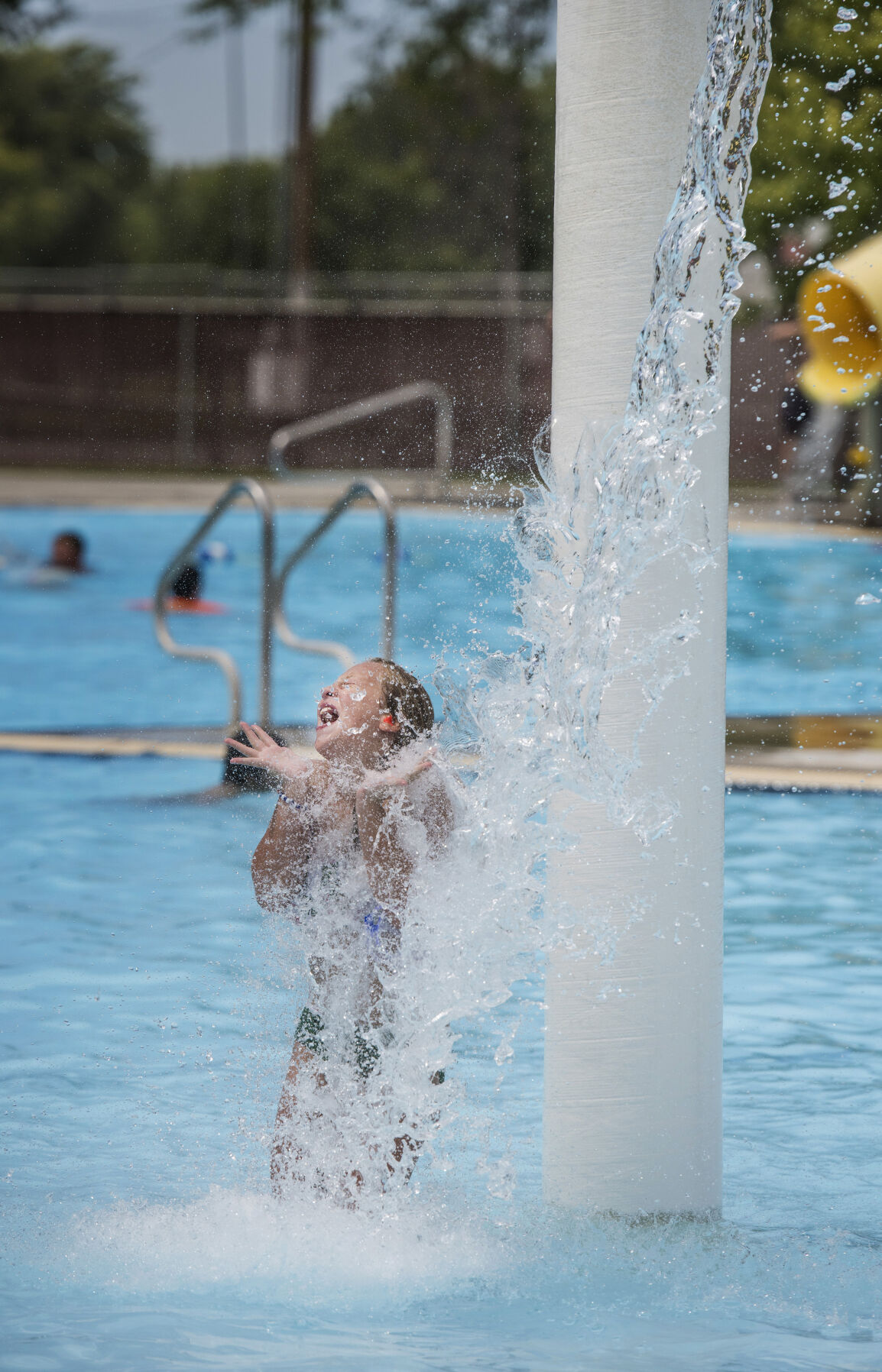 Brooke Boothman, 9, gets blasted with water at the Joe Humbert Family Aquatic Center in MIlton-Freewater in July of 2020. 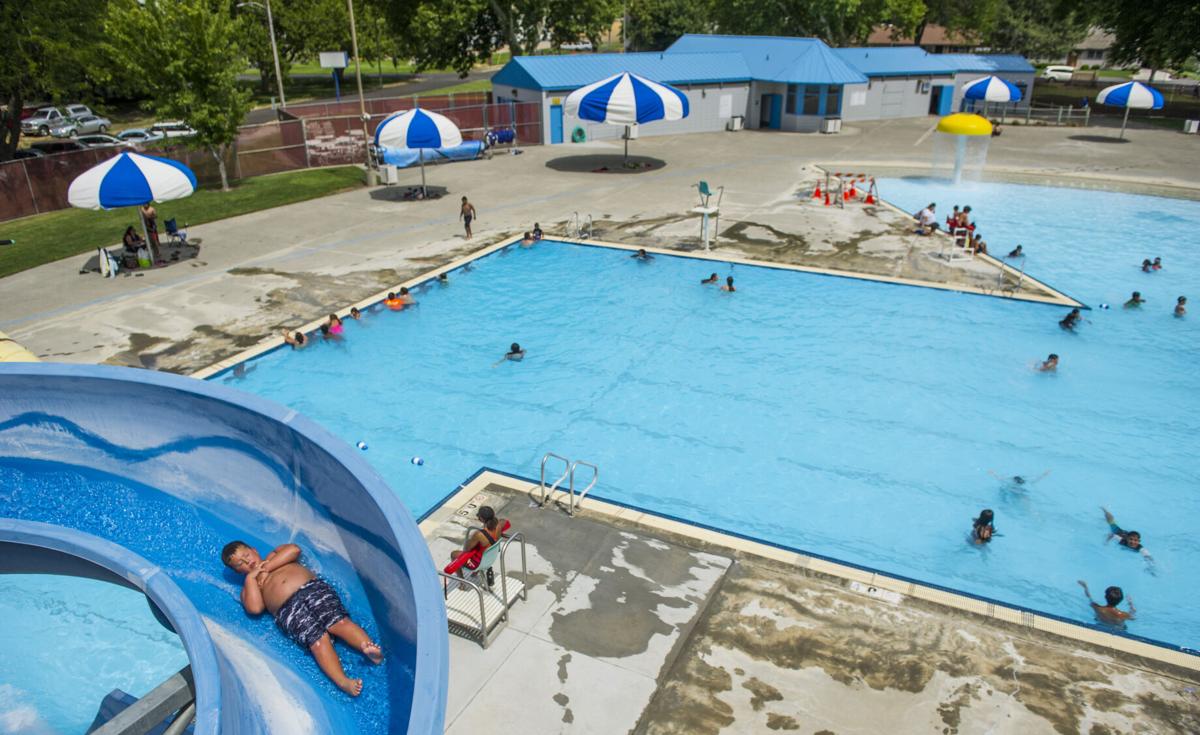 With no more than 100 allowed inside the gates, young and old enjoyed beating the heat at the Joe Humbert Family Aquatic Center in MIlton-Freewater in July of 2020. 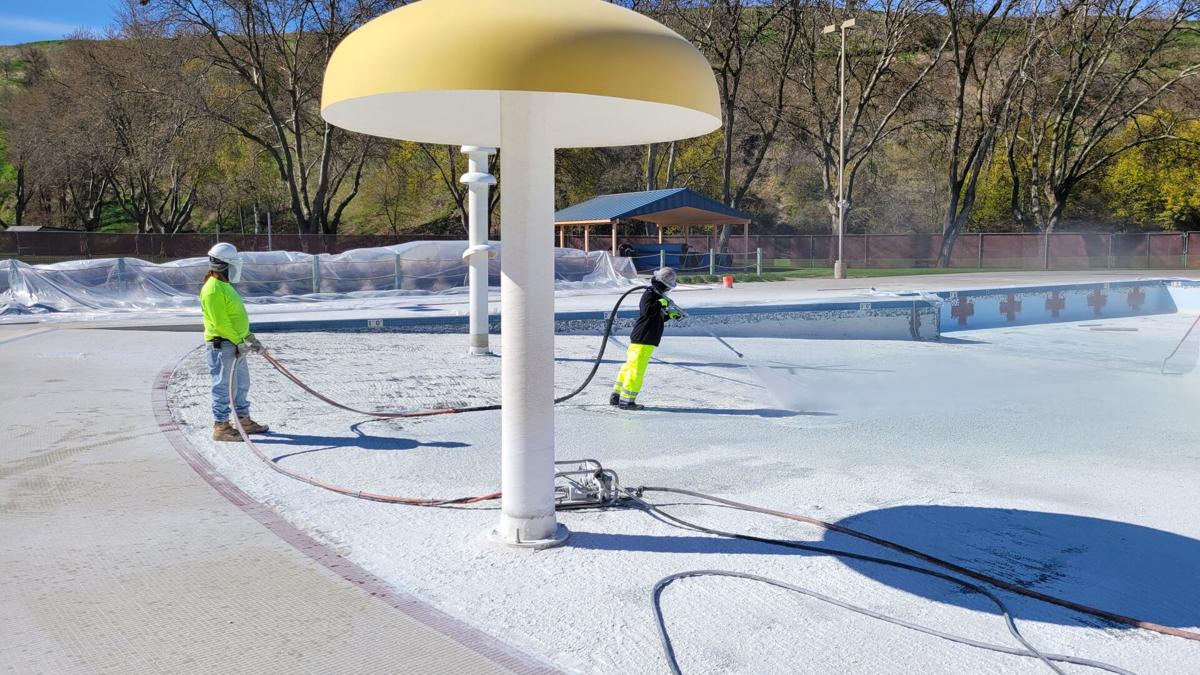 Anderson Poolworks employees Arnel Macans, left, and Matt Marcantonio blast off the aged and failing coating surface of the Joe Humbert Family Aquatic Center in Milton-Freewater. Project engineer Kevin Palmer said the next step is shooting on the new plaster, which will be shiny white with a blue quartz speckle. “It will be really smooth and feel really good to walk on,” Palmer said.

Brooke Boothman, 9, gets blasted with water at the Joe Humbert Family Aquatic Center in MIlton-Freewater in July of 2020.

With no more than 100 allowed inside the gates, young and old enjoyed beating the heat at the Joe Humbert Family Aquatic Center in MIlton-Freewater in July of 2020.

Anderson Poolworks employees Arnel Macans, left, and Matt Marcantonio blast off the aged and failing coating surface of the Joe Humbert Family Aquatic Center in Milton-Freewater. Project engineer Kevin Palmer said the next step is shooting on the new plaster, which will be shiny white with a blue quartz speckle. “It will be really smooth and feel really good to walk on,” Palmer said.

MILTON-FREEWATER — Linda Hall is very much hoping the third time will be the proverbial charm.

Hall, city manager, was filling in City Council last week on the status of the public pool.

Plans call for the Joe Humbert Family Aquatic Center to open on Memorial Day and stay that way until Labor Day, Hall said, but that’s been said before.

The facility, rebuilt in 1996 after voters here approved a bond, has suffered largely from age and a little from human error, officials have said.

In 2019, the pool closed at the end of July as a baffling, recurring issue clouded the water time and time again. The problem, while not toxic, hampered lifeguards trying to see swimmers in the water.

Through a process of eliminating possible causes, it was discovered the rubber coating that had been applied on pool walls that spring as an upgrade was disintegrating into the water.

Eventually city administrators and pool experts decided it made the most sense to close the aquatic center and reopen the next year. Refunds and holdovers were offered to season pass holders.

Along came 2020, which not only brought a highly contagious, global pandemic, but continuing issues with the pool. The replacement coating was a finicky product, requiring certain outdoor temperatures for a stretch of days and zero rain, Hall said last June. At the same time, Oregon’s COVID-19 restrictions affected every recreational setting and use.

In just a few weeks, the new coating also began failing, and smoke from regional wildfires made outdoor recreation unhealthy.

The pool closed early for a second year, after about three weeks of operation.

Aquatic facility experts eventually found the pool surface and much of the equipment had reached life expectancy of about a quarter of a century and that to continue recoating the plaster did not make sense, either economically or operationally.

That way the pool can be kept filled with water just above freezing level all winter to keep the plaster stable.

Indeed, that’s the way it should have always been, Hall would learn, but that was unknown when the pool was built in 1996.

Nor was that information in the operating manual, Council member Ed Chesnut pointed out in September.

The Milton-Freewater pool has been routinely emptied after each swim season.

The resulting freezing and thawing had done the most damage to the plaster, Steadman said. Hall noted the cost of keeping the pool water at above freezing is “pretty minimal,” even in very cold weather.

Keeping the pool filled will preserve a new coating for another 20 years, Steadman predicted.

While Council members voiced concern at the cost, they also acknowledged the facility’s importance in the community and called reopening the pool “a highest priority.”

The repair bill will have to come from a loan against already existing tax revenue, they said.

In December, the City Council approved a contract of $149,203 with Anderson Perry & Associates engineering services for resurfacing work and to replace broken and missing tile.

Last week, Steadman approached the Council again, saying inspection had shown the grating around all sides of the pool was weakened and broken in several places. Fixing that required another $23,491 for an amended total repair contract of $172,694, to which the Council unanimously agreed.

The city will again contract with the Walla Walla YMCA for staffing, which allows the public pool to open earlier in the season and stay open longer, Hall said.

As well, the facility will be overseen for the 2021 swim season by a certified pool operator. That person is qualified to manage weekly water testing, inspection and maintenance of pumps, filters and chemical levels.

It makes the most sense to let the YMCA make that hire, the city manager said.

The lifeguard and pool operator staffing agreement with the Y will total $81,710 for the season of 102 days.

The labor budget is a savings to the city of about $6,000 per season, Hall said, and the availability of certified lifeguards means the pool can offer more private rentals, raising more revenue.

If COVID-19 or other issues once again force early closure, the city will not have to pay for services not rendered, she added.

In her report to City Council, Hall emphasized that city staff is determined 2021 will be a “full, fun season” and is working to see it becomes a reality.

Pool repairs are slated to be finished by mid-May.

Veterans Memorial Pool will open on Friday, May 28. Other area pools in Prescott, Milton-Freewater and Athena to open in early June.