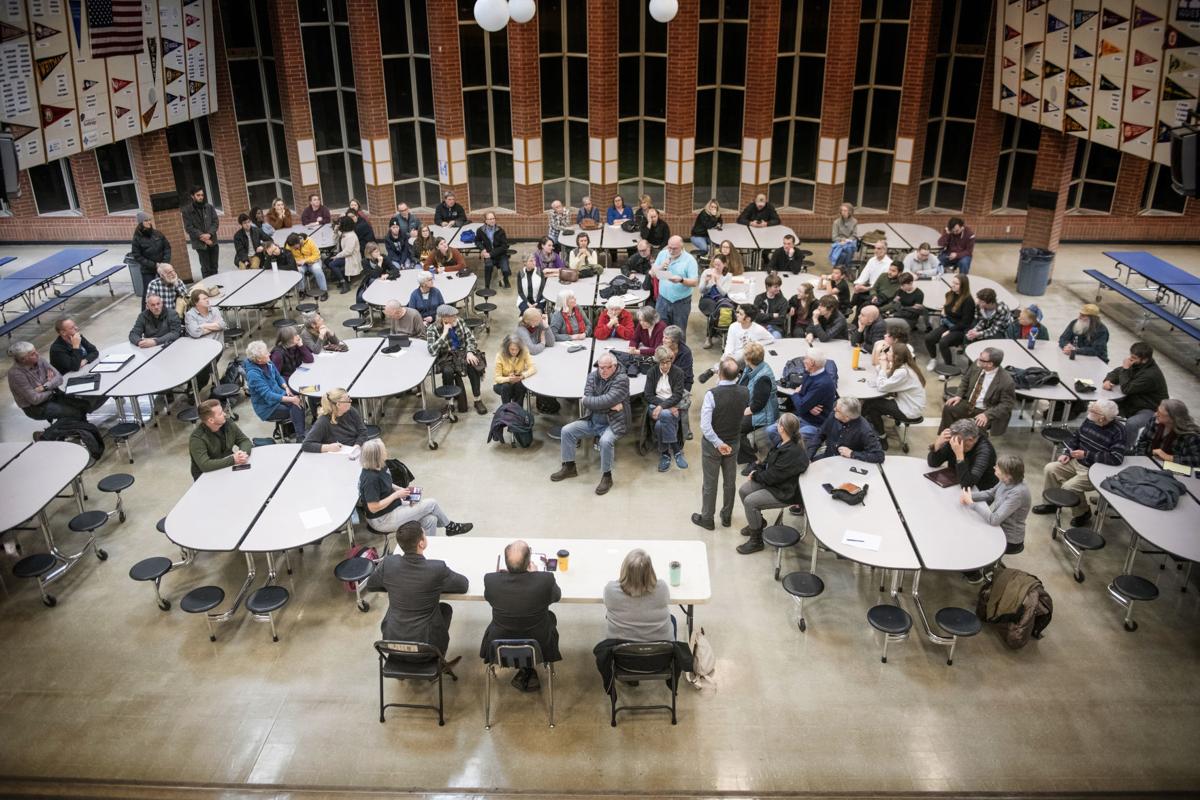 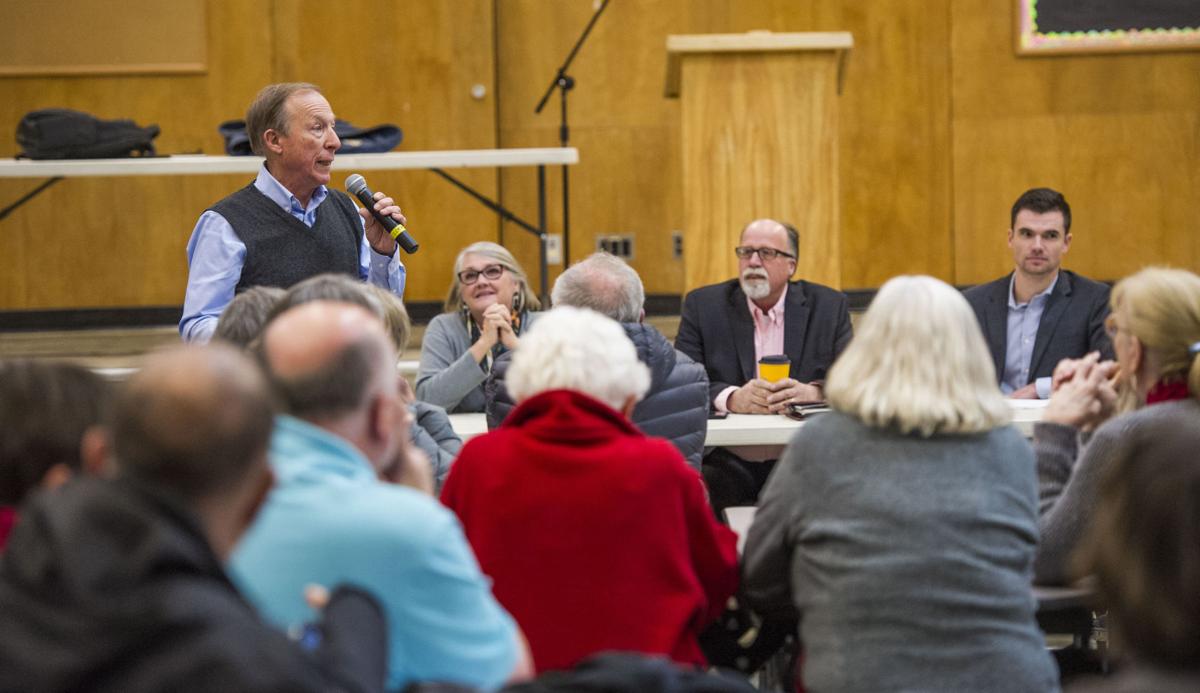 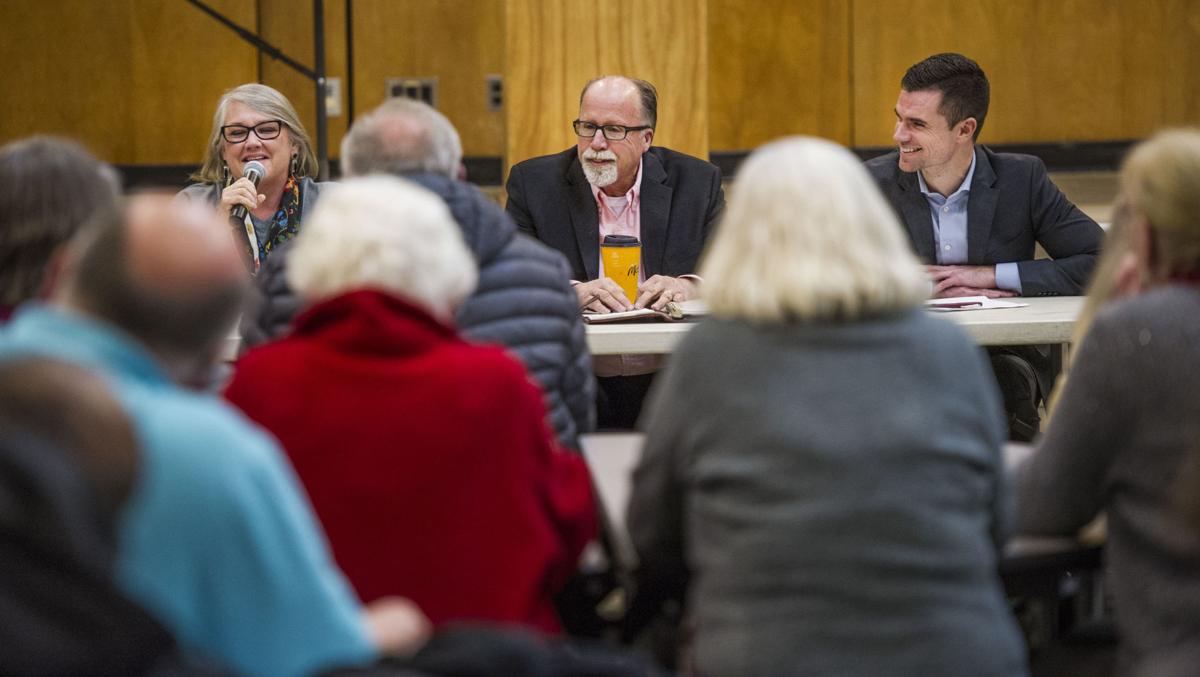 Wednesday’s legislator forum at Walla Walla High School was a study in youth engaging in politics.

A group of 12 young students, one from Benton County, raised a few questions about climate change, specifically seeking answers from Rep. Skyler Rude, the youngest of the legislators at the event.

Rude, a Republican from Walla Walla, said climate change is caused by humans.

“Climate change issues are important,” he said. “I am especially interested in plastic pollution. I think when it comes to emission and somewhat water issues, it’s really important that Washington state doesn’t try to tackle a global issue at a state level, because it’s not going to work.”

He told the audience, which included dozens of other residents aside from the youth in attendance, that the Washington state House of Representatives can contribute to a solution, but also, if they try to do it themselves, it can create a competitive disadvantage to the state economy.

“I don’t want to drive business out of Washington state,” he said.

Joining in the climate change discussion, Walsh said it’s important to think about the best way to go about a procedure that generally phases out a traditionally held use for energy, and the way that energy is used, into a new technology.

It is very important to do the least harm possible, she said.

Jenkin didn’t make his stance on climate change clear, but asked a lot of questions about the issue.

An audience member interrupted Jenkins and shouted from the back of the room, “But would you support declaring a climate emergency, yes or no?”

The moderator had to get involved, and afterward, Jenkin did not finish his answer.

When asked about recycling solutions, Rude said: “We created a state recycling resource center this year. I am hoping that it can be a resource for local governments to create recycling centers.”

Jenkin said he sees recycling as a need and has spoken in the past with city, county and Port of Walla Walla leaders about the issue.

A young resident asked about the tobacco age increase to 21 and why the legislators voted the way they did.

“I was opposed to that for a couple of big reasons, the first one is that at 18 you’re considered an adult,” Jenkin said. “By being considered an adult, you can be drafted, go to wars. I really feel that if we want to change adulthood to 21, then I wouldn’t have a problem with that.”

He said he really believes in personal choice.

“That was actually the first bill that I signed onto,” Rude said. “The reason for that vote was there are 18- and 19-year-olds in school, and typically high schoolers are going to associate with themselves.”

Peer groups are still the same, and if members of a peer group have the opportunity to purchase tobacco and share it and distribute it with those younger than them, increasing the tobacco age will get it out of schools, he said.

Another young person asked why it’s taken so long for Washington to ban conversion therapy for youth in the LGBTQ community.

Walsh said it was due to a lack of awareness.

“I thought it was very important that that wasn’t allowed ... I thought it was like torture, to me, but I also know that there are people that feel that people’s choice to medical treatment and how they care for their children was up to them. It was sort of a parental-control issue,” Walsh said.

“I had three members of the Senate, Republicans, in tears and say(ing) that they had changed their vote based on my speech,” she said.

Rude mentions his involvement in the LGBTQ Commission which is designed to address problems like this.

Jenkin was asked to respond.

Rude serves as assistant ranking minority member of the House Appropriations Committee, which handles any kind of bill that has more than $50,000 in spending.

He is working toward more bipartisan conversations and started a work group that will get Democrat and Republican lawmakers in one room to discuss policy and bills together.

“Normally there isn’t a lot of opportunity to do that,” Rude said, and he thanked the local Democrats for organizing this bipartisan forum.

Other issues raised at forum:

— Several audience members asked about the current status of Rep. Matt Shea, R-Spokane Valley, who was said to be involved in domestic terrorism in Eastern Oregon.

Rep. Bill Jenkin, R-Prosser, further explained: “Because it looked so damning, and because they could not reach him for his side of what is going on, leadership expelled him from the Republican Caucus,” Jenkin said.

They still allowed him to have an aid, and he still has the right to vote in the House, but was stripped of his committees, he said.

Rude is waiting for two exhibits to be given to him, within two weeks, which were mentioned in the report, that were not passed down to Representatives.

“Everything that could be done against him as punishment to this point has been done. The only other option would be expulsion, which is a constitutional process and requires a two-thirds vote,” Rude said.

If the report is accurate and matches the additional documentation he receives, Shea’s expulsion would be considered and likely supported, Rude said.

— Work on U.S. Highway 12: All three legislators, which included Sen. Maureen Walsh, saw the Highway 12 project as crucial work that needs to be continued. Walsh and Rude both recommended emailing the governor’s office, urging to keep funding for Phase 7 of the project alive.

— Education at the Washington State Penitentiary: In a discussion about education for inmates at the Penitentiary, Rude said that 70% of inmates at the Pen will, in 10 years, be released back into the community. With this information, he said it would be good to give more opportunities to inmates to get a return on the state's investment.