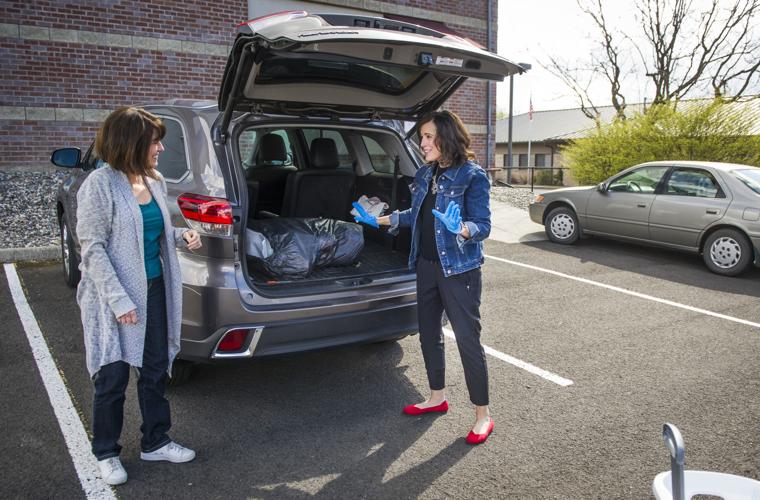 In this 2020 photo, Helpline Executive Director Liz McDevitt, left, talks with Tami Sirmon who stopped by the agency for a load of toilet paper, paper towels and baby wipes for local childcare facilities. At the end of this year, this kind of assistance will come from other service agencies after Helpline closes. 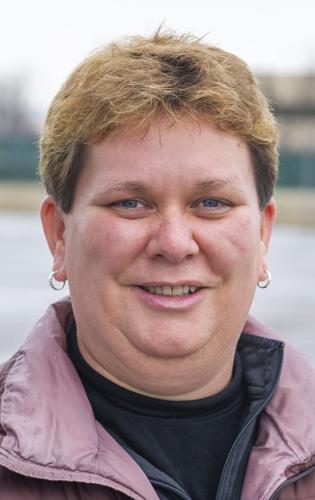 A longtime “front door” social service agency in Walla Walla will be closing that door at the end of the year.

After almost a half century of helping a wide variety of people get through any number of crises, Helpline is ending its services on Dec. 31.

Officials with the nonprofit agency are considering what to do with its remaining financial assets, including an endowment fund, and how the services it now provides will be absorbed elsewhere.

The “very tough” decision to shut down has been coming for months, board chair Jennifer Skoglund said last week.

Not for any lack of support from the community or less need for help among the area’s most vulnerable, Skoglund emphasized.

But the lines that defined which agencies do what have blurred in recent years, notably during the most intense period of the COVID-19 pandemic.

The social services model has largely changed over the years, Skoglund said, as more nonprofits started a presence in the community, offering some of the same services as Helpline.

When the agency began 49 years ago, it was telephone assistance only, with people answering calls and directing assistance seekers to appropriate resources. At that time such information was not widely available outside Walla Walla County’s social safety network, or even among agencies. Past media stories talk about the silo effect — decades ago social agencies here and elsewhere more or less worked alone in their missions. It was an inefficient model that sent people all across the county to get needs met.

A step into the lobby of Helpline’s office meant a step toward solving those kinds of problems, said Skoglund, who has served on the board of directors there for a decade.

“We accepted everybody for who they are and tried to make a positive difference in their lives.”

Now, not only has the landscape of nonprofit work changed, she said, “people have cellphones, and they can Google where to get help.”

That makes for less of a need for emergency referrals, among other things, the board president said.

The nonprofit has survived mainly on the generosity of donors invested in bettering lives and its annual luncheon fundraiser, “Souport,” without benefit of government grants.

The daily work has been undertaken by what Skoglund called a passionate staff and core volunteers.

Kathy Covey retired from leading Blue Mountain Action Council in 2021 after 40 years at that agency.

She had her first encounter with Helpline in 1978, Covey recalled, and watched as the agency went under the umbrella of various larger organizations such as United Way of Walla Walla County, where it flourished under the leadership of Lee Zimmerman.

Helpline has been heavily supported by the area’s religious community, the first group to recognize that people in need were going from church to church to try to gather essentials such as food and clothing.

From that early start, Helpline became the glue that filled in the cracks in social services in this area, Covey said.

“I can’t say enough about every person who worked there, who volunteered there. Regardless of who was in charge, they were one of our closest partners in the war on poverty.”

While she is much newer to this community, current CEO of Blue Mountain Action Council Cate Daniels concurs.

So many people have relied heavily on Helpline for resources, Daniels said.

Helpline created a blueprint for resource referrals as it partnered with SonBridge Community Center in College Place and the Salvation Army, among others, Daniels noted.

“They have had this core competency” in that work, she added.

“Even before I learned of this decision, I had a lot of respect for the work it’s done, and I think there are a lot of conversations about changing ways of doing this work, including virtually, which we learned to do really well in the pandemic … for some people that really reduces barriers. They don’t have to take time off work or bring in the whole family.”

BMAC now offers many of the same services as Helpline traditionally has, but with that agency’s announcement last week comes an urgency to get more in place, Daniels said.

“We know it makes a difference when we meet with someone to address as many of their needs as possible. We don’t necessarily always have personal hygiene care products on hand … We’ve been working on addressing that, including food items to get people through a crisis.”

“We’ve been very thoughtful about our assets.”

The goal is to plant those with other nonprofits that can grow the mission, she added.

“We want to be very transparent as we move forward at what those future decisions will be and that clients know where to go.

“We want to have Helpline leave a lasting legacy … and to honor what our donors wanted.”