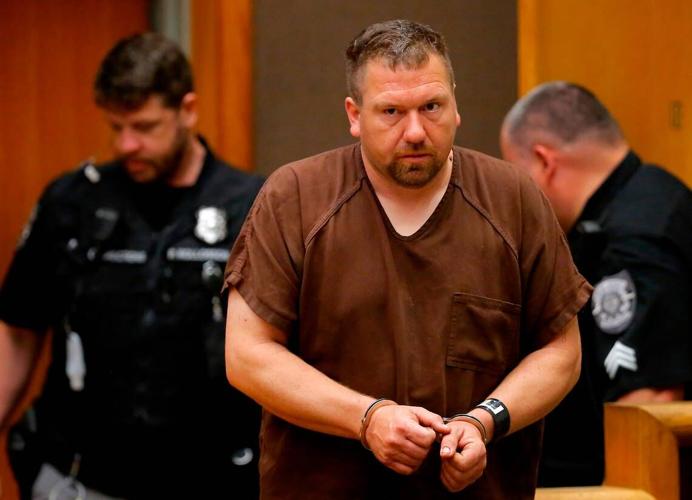 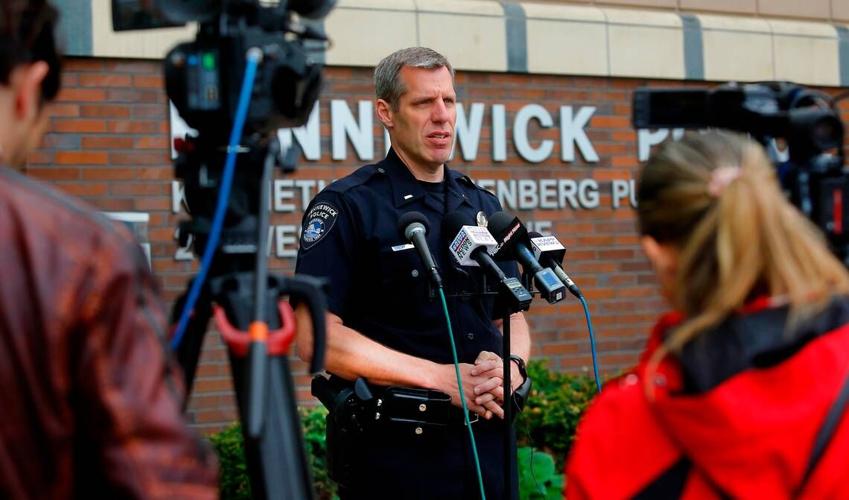 Lt. Jason Kiel of the Kennewick Police Department announces the arrest of a suspect Friday morning in the violent death of Clayton Wick. Wick’s body was discovered by his housekeeper in his house at 440 S. Buchanan St. in the afternoon of May 3.

Lt. Jason Kiel of the Kennewick Police Department announces the arrest of a suspect Friday morning in the violent death of Clayton Wick. Wick’s body was discovered by his housekeeper in his house at 440 S. Buchanan St. in the afternoon of May 3.

KENNEWICK — Christopher R. Calvert may have beaten, cut and stabbed a Kennewick man to get revenge on a former employer.

Calvert, 44, was recently fired from a Hermiston, Ore., farm run by Darren Cox.

When one of Calvert's friend offered to help him get revenge by cutting Cox's sprinklers, Calvert said he had done better than that, according to court records.

"Then Chris had stated, 'You know how hard it is to kill someone with a butter knife?'" according to court records.

Clayton "Clay" Wick, 76, a beloved Mid-Columbia musician, was a good friend of Cox. He was found dead at his home Tuesday.

His Buchanan Street home, where he lived alone, had been trashed and there was blood on both levels of the house.

The 76-year-old man had been beaten, stabbed and cut before being left for dead. His killer had placed cardboard over the pools of blood so he could avoid stepping in it, according to court records.

Calvert, the alleged killer, had grabbed Wick's wallet, took stuff out of his garage and finally drove away in Wick's Honda CRV, said investigators.

He was arrested in Wick's car in Skamania County on Thursday after police with the help of federal agents tracked him to a small town about an hour outside of Vancouver.

Calvert appeared in Benton County Superior Court on Friday afternoon and pleaded innocent to premeditated first-degree murder and vehicle theft. He is accused of the aggravating circumstances of a lack of remorse, invading Wick's privacy and excessive injuries.

He is being held in lieu of $1 million bail. His trial was set for June 22.

Calvert has a long criminal history, mostly in Oregon, including convictions for possessing meth, eluding police and manufacturing drugs, according to online court records.

When he allegedly killed Wick, Calvert was facing charges in Franklin County after he was caught with Cox's stolen Subaru Legacy in Pasco on April 5.

Cox had asked Wick to hold onto the car because he was afraid that Calvert would try to take it again.

Cox was the first person to call police with concerns about not hearing from his friend, according to court records.

He hadn't heard from Wick since April 27, so he phoned Kennewick police on Monday, May 2.

When police arrived at the Buchanan Street house, they knocked on the door but didn't get a response and didn't see a car in the driveway.

Kennewick Lt. Jason Kiel said officers didn't have any reason to suspect that something was wrong inside the house.

On Tuesday, Cox called again after learning Wick had not shown up at symphony rehearsals for several days. He was a bass player in the Mid-Columbia and Walla Walla symphonies.

Officers checked again, but still didn't notice anything wrong, so they had no probable cause to force the door open to look inside.

Later that day, Wick's housekeeper arrived at the house and found it ransacked. She said Wick was normally very tidy. When he left, he would usually let her know.

Sometime around the same time, Cox and an employee also went into the home's backyard and saw that the house was trashed. Cox's employee found Wick's body in the laundry room in the basement, said court documents.

At first, investigators had trouble tracking down Wick's family members but they've since been notified, Lt. Kiel said on Friday.

Investigators believe there was a struggle in the living room that continued into the kitchen and down the stairs into the basement.

Police found Wick's body in the laundry room covered in a blanket.

They discovered three bloody kitchen knives next to Wick, a bloody wrench in the kitchen sink and a fireplace poker at the bottom of the stairs.

Cox told police he had left his Subaru Legacy with Wick because of Calvert, and he noticed that multiple bags that had been on top of the car in the garage had been taken.

Police received a tip on May 4 from Calvert's friend about the man's alleged admission to killing Wick "with a butter knife."

The man had known Calvert for nearly three decades and had started by buying marijuana from him and then meth.

He had met Calvert at a mutual friend's home either on Sunday or Monday after Calvert had pulled up in a truck. Calvert had asked his friend whether he could dig a hole. At the time, his friend thought Calvert was joking.

At another point, Calvert reportedly told his friend that he had been fired by Cox. His friend had done sprinkler work for the farm, and he offered to help Calvert get back at the farmer by cutting sprinkler lines.

Calvert said he had done better than that, and that the body was starting to stink.

Calvert was a fentanyl user, so his friend thought the comments were a joke until he saw news reports about Wick's death. He confirmed with Calvert that he was talking about Wick.

"Chris had told him that the guy had no family, so no one will know," according to court records. "He added that he had even met Clayton Wick at Darren's farm in the past and he knew that Clayton was a very nice man and could not believe what Chris had done."

After a Tri-Cities judge agreed to issue a nationwide, $1 million first-degree murder warrant for Calvert's arrest, detectives tracked him to Stevenson, Wash.

When police tried to pull him over, Calvert sped away, starting a five-minute chase that ended when officers forced the car into a ditch in a rural area of Skamania County.

He was arrested, driven back to the Tri-Cities and booked into the Benton County jail Thursday.