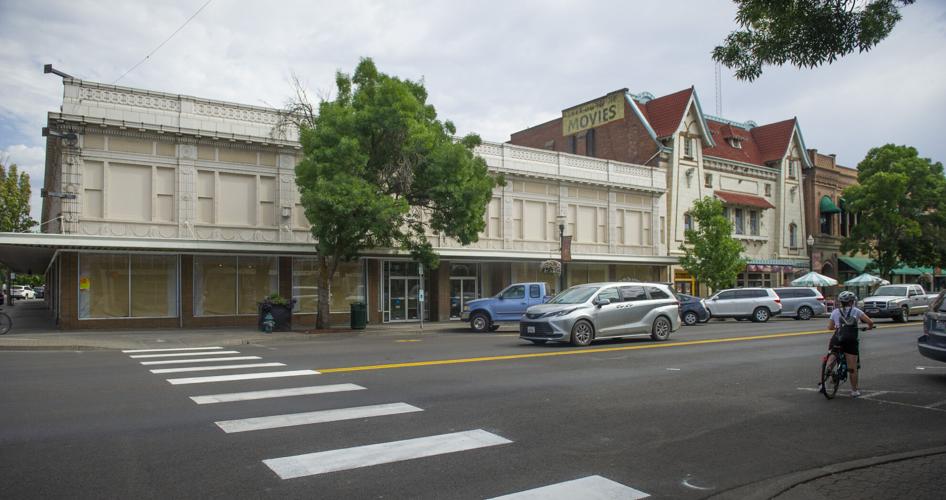 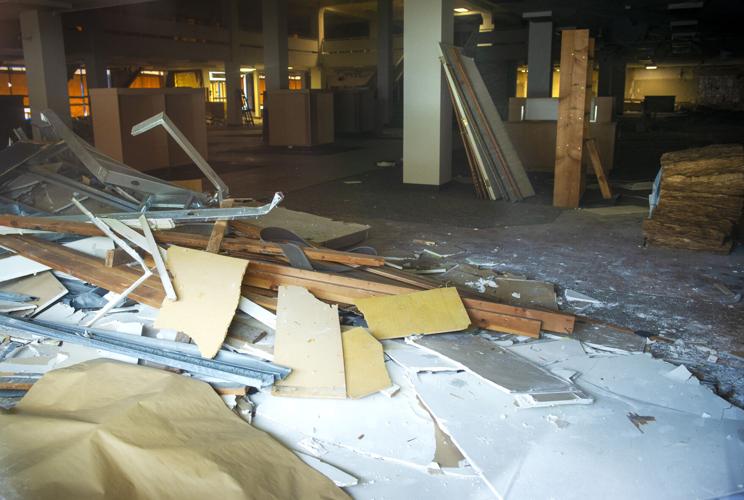 According to the application filed on May 13 with the city’s planning department, the property’s developer is listed as “54 East Main, LLC” and Joshua Hurlburt of Lake Tapps, Washington (near Tacoma), is named as the registered agent.

The planning commission approved the permit on July 11, city planner Jon Maland said, but because the property abuts Mill Creek, “the development triggers a shoreline permit, and that’s why City Council has to approve it.”

Filed documents show the developer wants to “convert the former department store to retail and extend-stay hotel uses. Added improvements include a private terrace and open courtyard.” Macy’s closed in the early part of 2020.

The project is labeled the “A.M. Jensen Building,” and Tri-Cities-based Steven Day Architecture is listed on the conceptual drawings.

That courtyard would start at basement level and go up through the center of the historic building, Maland said on Tuesday, Aug. 9. 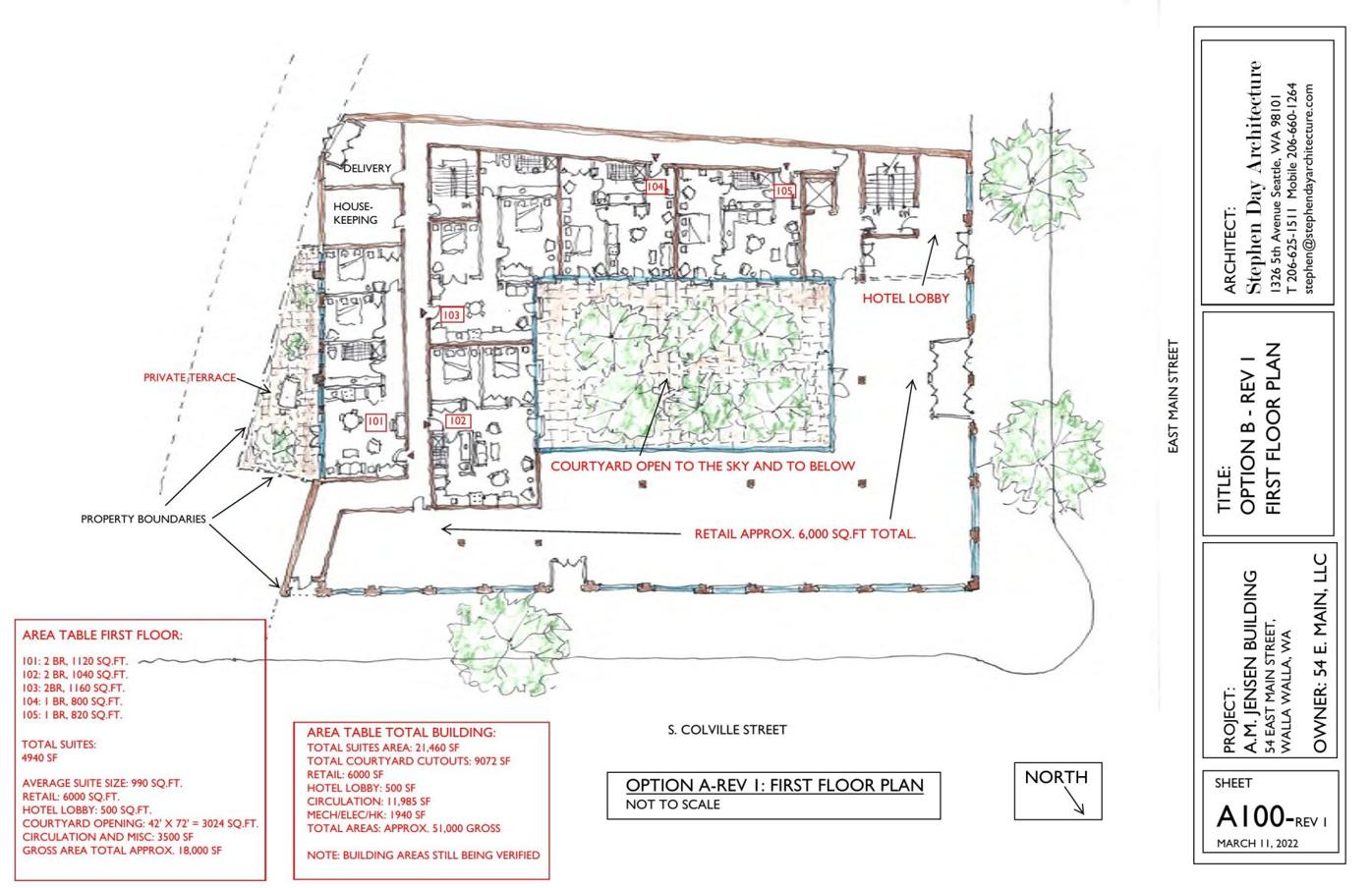 First-floor retail spaces would front Main and Colville streets, while much of the interior would be used for extended-stay suites. The courtyard, which will be open air, will measure out to more than 9,000 square feet. A private terrace is planned for the back of the former Macy’s building. 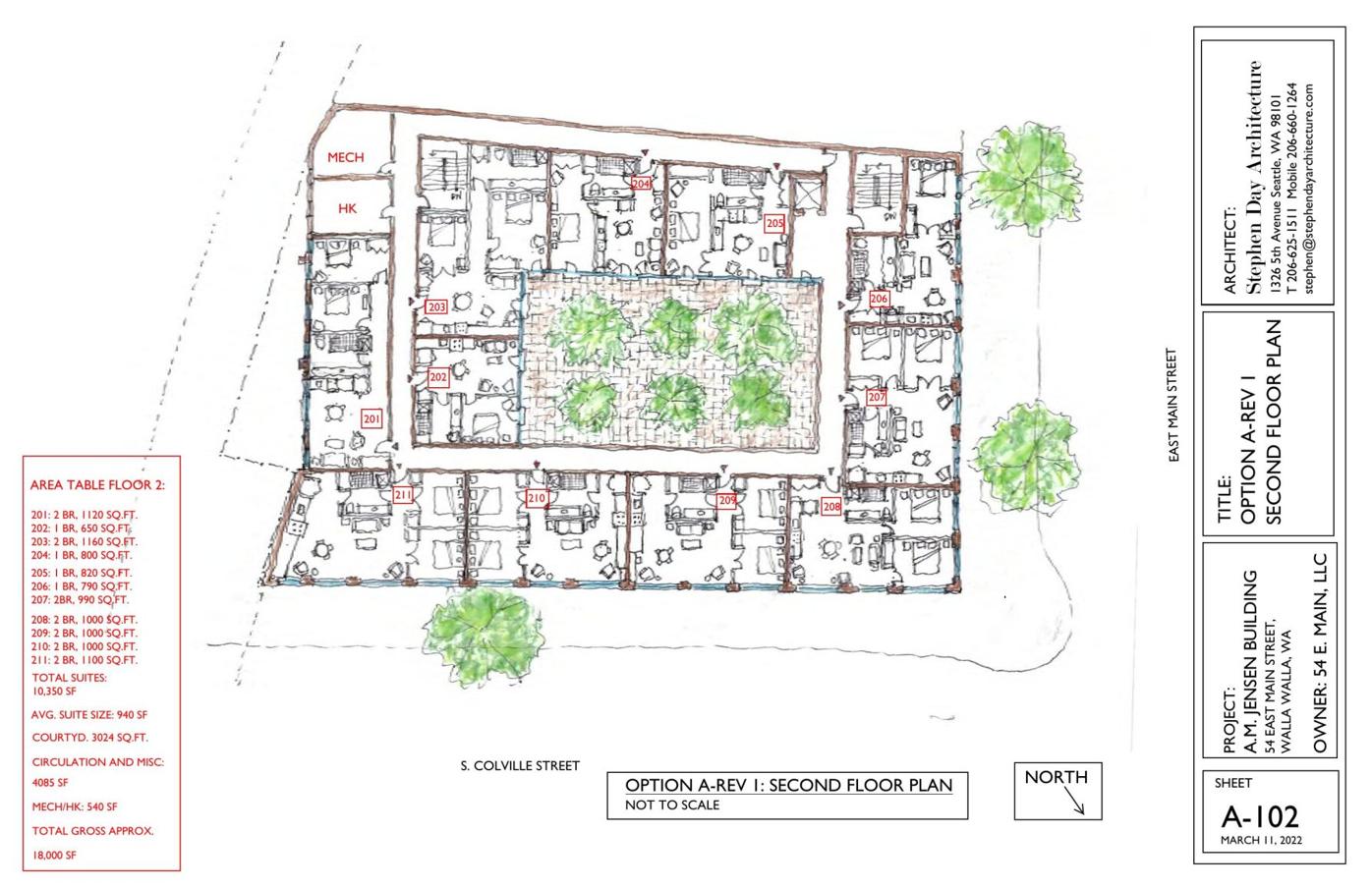 Maland’s staff said in its report that public access, pedestrian and bicycle circulation will continue to be open during the remodeling of the building, and the existing exterior walls, made of terracotta, will remain intact. 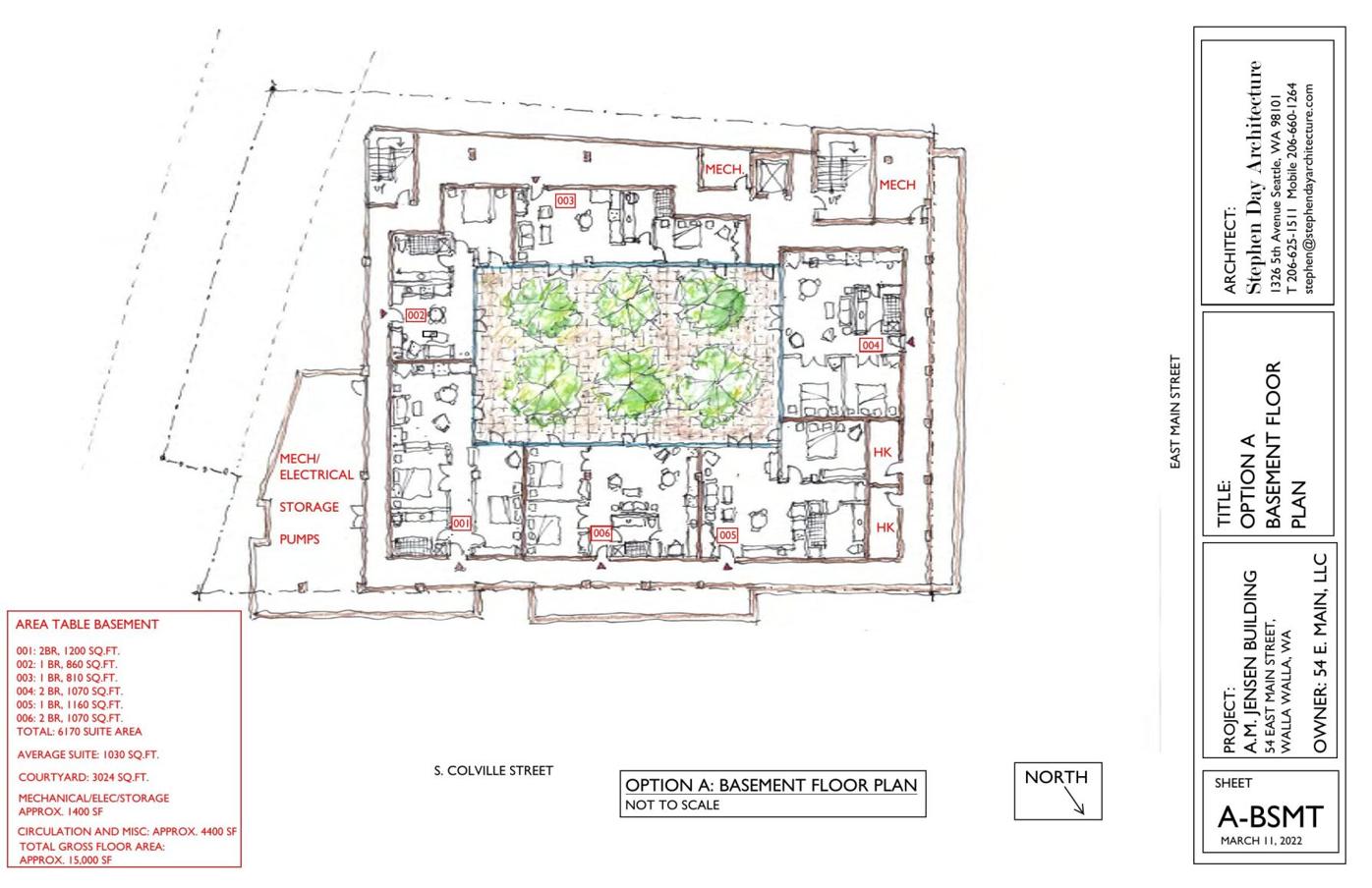 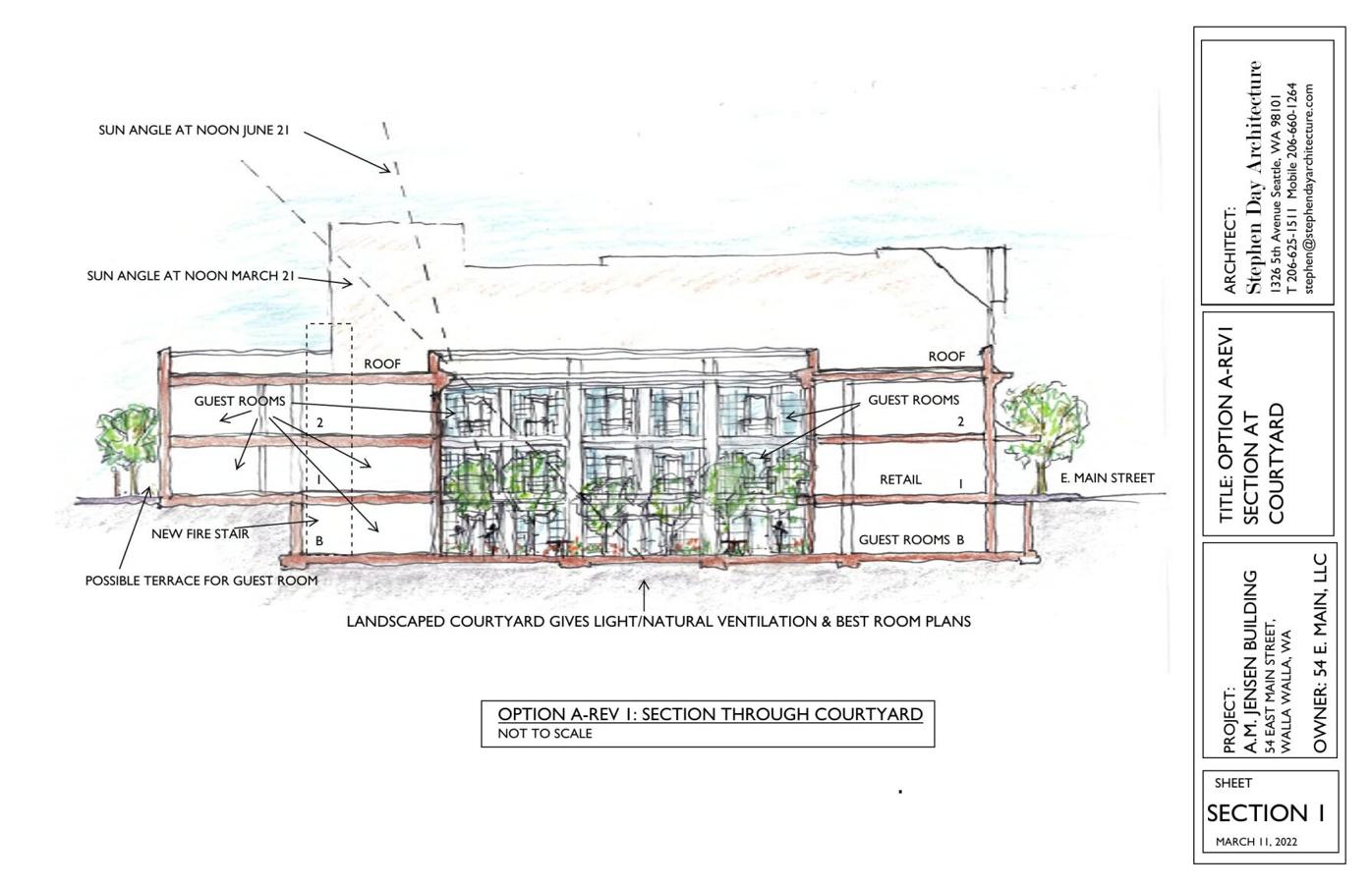 The property is located within 200 feet of the ordinary high watermark for Mill Creek, according to the commission’s report, “ subject to the provisions of the city of Walla Walla’s Shoreline Management Master Program. This channel portion is adjacent to the building and within the urban downtown area.”

The goal of the shoreline program is to prevent harm from uncoordinated development of the state’s shorelines and to provide plans, policies and regulations consistent with Washington’s Shoreline Management Act.

That legislation contains guidelines in how to reflect the desires of a community with regard to balancing the use of city shorelines.

“Mill Creek is an asset to the community, and the city’s vision of restoring Mill Creek to a more naturalized system while recognizing the vital flood control aspects of the channel is an overarching goal of the Shoreline Master Program,” notes the permit document.

The idea is to preserve the high quality of the city’s waters and shorelines for future generations while respecting the rights of property owners and promoting the economic vitality and sustainability of the city.