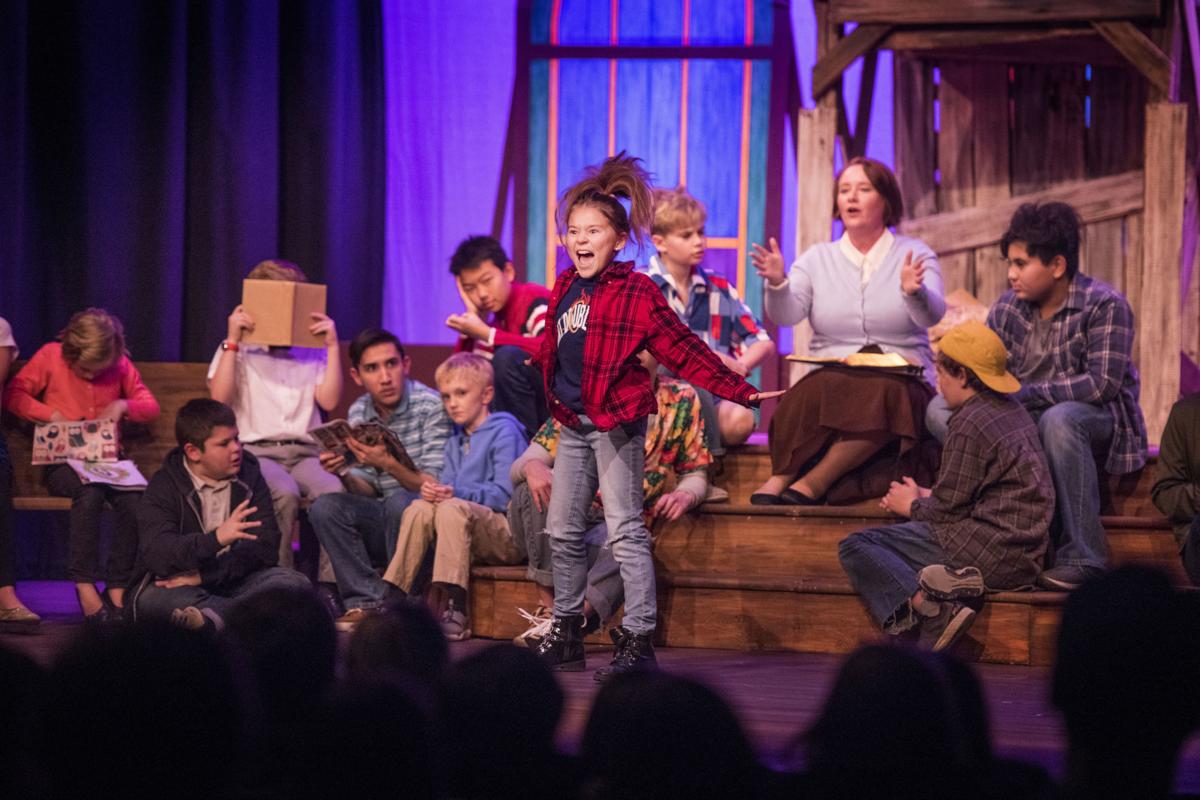 Gladys Herdman, played by Ingrid Iverson, leaps into action as an angel during The Little Theatre of Walla Walla’s production of “The Best Christmas Pageant Ever” at Wednesday’s special showing for Families of the Walla Walla Valley Disability Network. 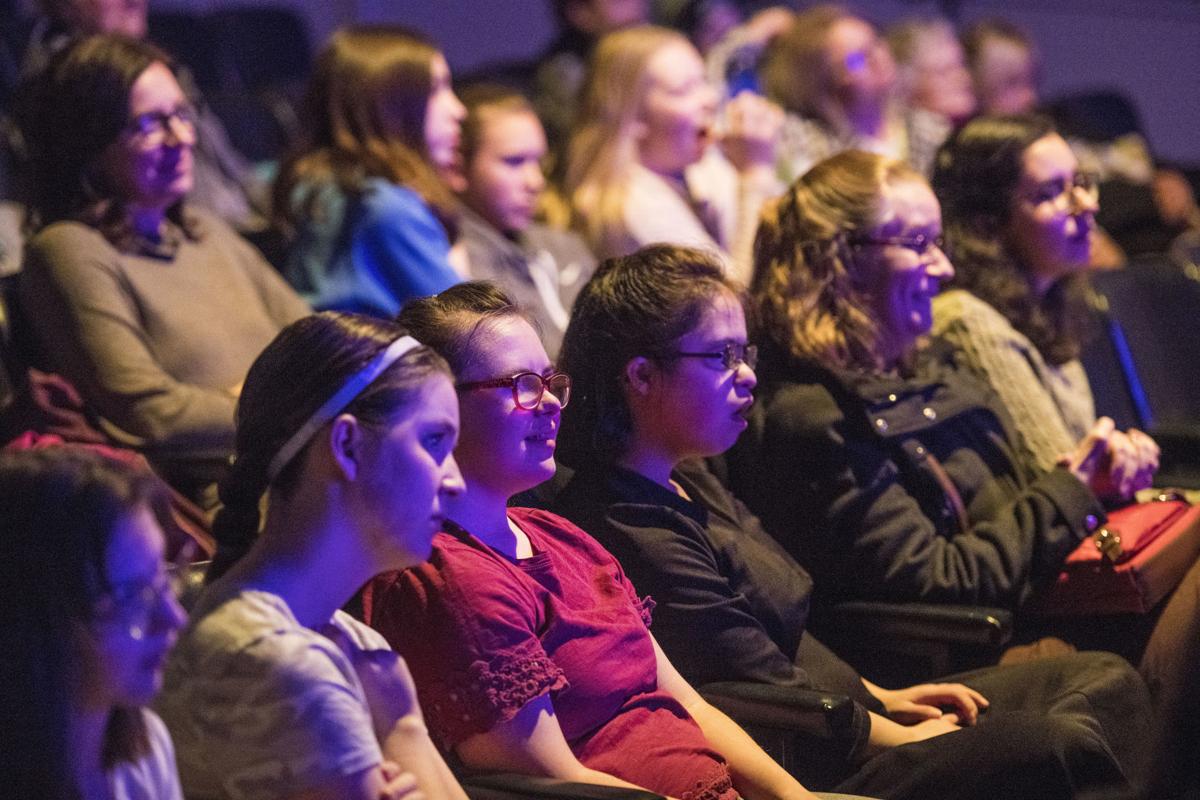 Felicity Matson, left, Molly Knight, center, and Olivia Baez watched The Best Christmas Pageant Ever. Their families were equally enthralled at the inclusive performance presented by the cast at Little Theatre.

Gladys Herdman, played by Ingrid Iverson, leaps into action as an angel during The Little Theatre of Walla Walla’s production of “The Best Christmas Pageant Ever” at Wednesday’s special showing for Families of the Walla Walla Valley Disability Network.

Felicity Matson, left, Molly Knight, center, and Olivia Baez watched The Best Christmas Pageant Ever. Their families were equally enthralled at the inclusive performance presented by the cast at Little Theatre.

Christmas really did come early for some Walla Walla Valley families this week.

On Wednesday, the cast and crew of The Little Theatre of Walla Walla presented a full dress rehearsal of “The Best Christmas Pageant Ever” to a special audience — families of children with extra needs.

Judging by eyes wide with wonder and mouths agape in the audience, the gift was expertly delivered.

The play opens for general audiences today at 7:30 p.m. The classic story involves a couple, Bob and Grace Bradley, struggling to put on their church’s annual Christmas pageant, a job that’s suddenly been foisted upon them.

Nothing to really worry about — the event is as stale as Aunt Betty’s fruitcake and there are no surprises. Ever.

All that changes with the sudden involvement of the notoriously rascally and rowdy Herdman kids from the unchurched side of the tracks. In dealing with the pageants mishaps and misperceptions, the whole congregation finds itself having to be reminded of the reason behind the season.

The play is short and lively, plus “kid rich,” making it a good option to try something new this year, said theater’s Managing Director Mikki Jones.

In doing a dedicated workshop for children with non-typical needs this summer, Jones and others had ideas for ongoing inclusion.

“Little Theatre wants to be so inclusive for people with disabilities,” she said.

“It’s been on my heart and on many of those key in the theater. Pursuing this opportunity is really important to me.”

Equally so to one of the play’s co-directors, Cheryl Sutlick.

It occurred to Sutlick this year that although she’s been involved in community theater since 1985, she’s rarely seen kids with disabilities at a show.

As a mom of two sons with two different disabilities, Sutlick has been the parent whose child was uncomfortable in an unfamiliar environment or who didn’t care to be surrounded by strangers, she said.

“My youngest son, he was as smart as a whip, but he had cerebral palsy. He loved movies, and they didn’t have sensory showings then. So I would take him when there were the least amount of people.”

Many people who have intellectual and other disabilities struggle with the darkness, noise and crowds of traditional entertainment settings, said Cyndy Knight, executive director of the Walla Walla Valley Disability Network.

“Our crowd tends to be a little unexpected in their behavior.”

Sutlick set out to make space for kids with non-typical needs and their families to just enjoy themselves at a play, she said.

They wanted, that was plain to see Wednesday.

Sutlick had invited families associated with Knight’s organization, and about 70 adults and children accepted her offer of a free preview.

As the show’s cast carried out a flawless rehearsal, young and not-very-young theater-goers waved at actors with enthusiasm.

When the show’s church choir ascended the stage from the aisles to start things off, smiles began popping up on even the smallest faces.

Although one audience member could be heard asking to go home again and again — until the house lights were brought up to allay her anxiety — not one actor dropped a line or a cue.

Some watchers rocked in their seats, some stood up. Others asked questions aloud, and a few shrieked on occasion.

None of that mattered to their folks, who sat with hands in laps, outstretched legs and big smiles.

By the time a communal “Silent Night” had been sung and a standing ovation given, Knight was ready to gather her daughters and depart.

The night could not have gone better, she declared.

“This was so nice of them to do this for us. We didn’t have to worry about what our kids were doing. We could just enjoy it.”

Her 3-year-old son, Ahvniel, is diagnosed with autism, and that means some preschool meltdowns can be more severe, Luengas said.

“Once he enters that mode, I can’t tap into him … and people start staring. I want to tell them, ‘He’s fine, he has a good family but he has autism.’”

Those sorts of incidences make Wednesday’s event a real gift, she said.

“It was so nice; everyone was so relaxed. There are hardly any places I can go and feel at home like that. Everyone there was just like us. These are my people.”

That the show’s cast, including some very young angels, welcomed the families in and performed like pros was huge, Knight said.

“I’ve never felt so welcomed. It truly was the best Christmas pageant ever.”