Hundreds of volunteers during the flood last week helped shovel sand into sandbags at Koncrete Industries on 13th Avenue. The business became the heart of volunteerism and community assistance, drawing people and businesses from all over the area to help during the disaster. 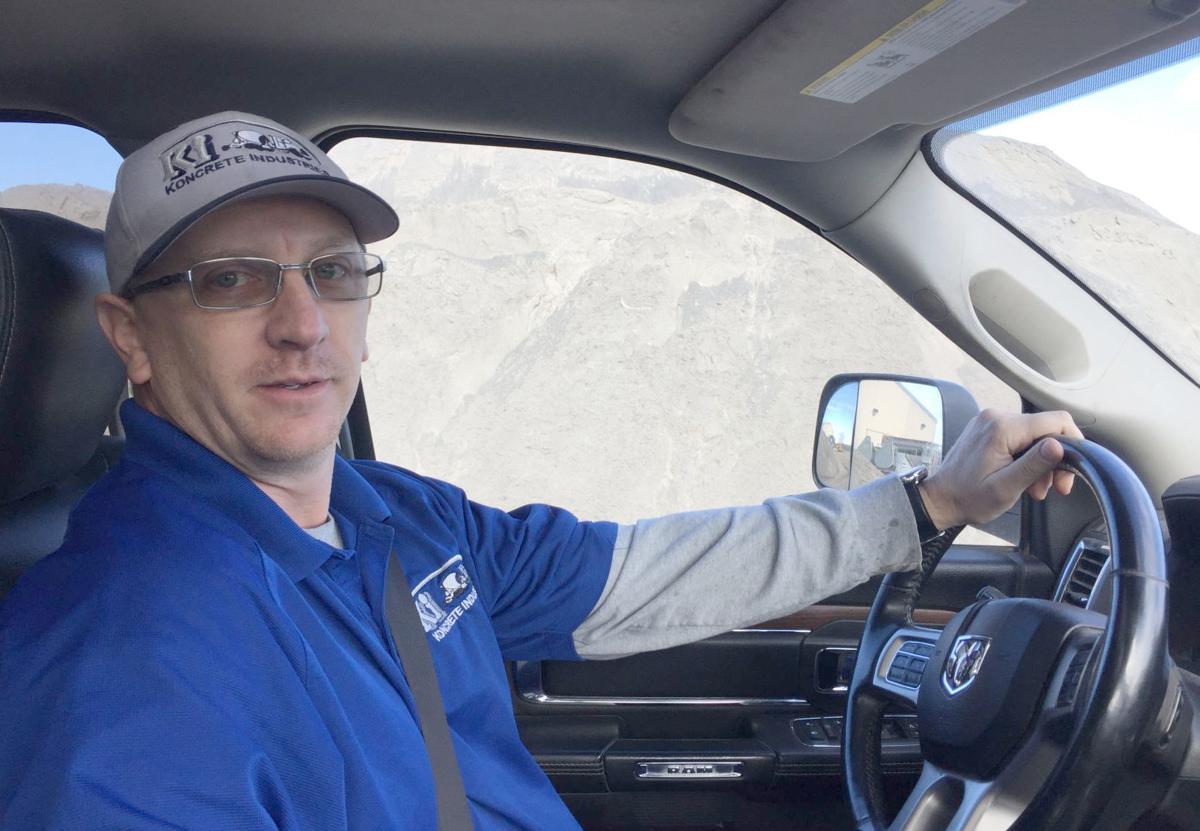 Koncrete Industries Vice President Ryan Konen at the 13th Avenue property this week said he's never seen anything like the outpouring of community support through the 2020 flood.

Hundreds of volunteers during the flood last week helped shovel sand into sandbags at Koncrete Industries on 13th Avenue. The business became the heart of volunteerism and community assistance, drawing people and businesses from all over the area to help during the disaster.

Koncrete Industries Vice President Ryan Konen at the 13th Avenue property this week said he's never seen anything like the outpouring of community support through the 2020 flood.

Water levels ripping through the Mill Creek channel at the 13th Avenue bridge just a couple of feet from his family-owned Koncrete Industries property combined with relenting rainfall one week ago.

The scene took him right back to memories of the 1996 flood, when he was just 17 and battling a landslide with his father in Dayton.

So that afternoon last week, as the water in Mill Creek rose, he diverted two employees at the business known for concrete, sand, gravel, precast forms, pavers and more — and also the go-to spot each winter for sandbags — to fill bags in anticipation of consumer demand.

What came in the next 48 hours, though, still shocks him. People started to arrive for sand, but they didn’t stop.

Neither did community and business support. Koncrete Industries transformed into the nerve center of volunteerism and community with an estimated 200 to 300 people during peak hours digging into the mountain of sand that supplied barriers to threats from one of the worst floods in regional history.

“I’ve never seen anything like it,” Konen marveled Tuesday. “It just blew me away.”

Each winter, Koncrete Industries bags and sells anywhere from six to eight pallets — 35 bags to a pallet — of sand. A full sandbag retails for $8.

Between last Thursday and Saturday, an estimated 28,000 bags of sand — largely filled by volunteers from inmates and elected leaders to school kids and high-heel clad business professionals — were packed at the property in a massive display of help.

The 40-pound bags equate to about 1.1 million pounds of sand given to the community free of charge, Konen said.

He attributes the fast-thinking action and response to two things: the family values that launched the company in 1989, and the memories of the 1996 flood that decimated homes and properties.

That disaster still seemed fresh, in some ways.

Back then he was a high school student in Dayton, where his dad, Tom, owned and operated the rock quarry Konen Rock Crushing. It was a separate business to Koncrete Industries, started by Tom’s father and brothers, Dave and Bob Konen.

Worried about the condition of the quarry in 1996, Tom and his son attempted to walk from their home up North Touchet Road to assess the property. Around the 8-mile marker, they encountered a landslide and tried to walk across the sediment.

“It was like quick sand,” Konen said. His dad sunk shoulder-deep into the dirt. Konen had to dig him out by hand. At the quarry, the rock crusher they used to make gravel was 3 feet under debris from the flood.

When the water began rising last week in the channel, Konen recognized what was going to happen all over again.

Now co-owner with his uncle Dave in the rock-crushing business from which his dad recently retired, and vice president of Koncrete Industries, he drew on the groundwork laid out by his family years before him.

“When it first happened, all I could think about was my grandpa, my uncle Dave, my family — what would they do? They would do whatever it takes to help these people out,” Konen said.

At first, it seemed that 3,500 bags might be enough. The team of two staff members began filling sand last Thursday afternoon. But soon, they couldn’t keep up with demand.

A work crew from the county jail was brought in to help and worked alongside two Walla Walla County commissioners and Emergency Management staff shoveling from a pile brought to the warehouse to be free from the rain.

Before too long, Konen reached out through the My Town page online to seek community volunteers. About 70 people turned out, and after dusk, with 1,500 bags loaded on pallets outside of the Koncrete gates, area residents were encouraged to take what they needed as the operation shut down for the night.

“We thought we had enough,” Konen said.

But the water flow doubled through the night. Homes up Mill Creek were evacuated, and roads and bridges were washed out or deemed unsafe.

By morning, the supply of sandbags was nearly empty. The rain wasn’t stopping. The water level of the creek outside of the plant was just about a foot under the bridge. The Dayton quarry was closed, and access along U.S. Highway 12 between Waitsburg and Dayton was shut down.

The rain meant concrete production at the plant would be down. So the focus became bagging sand. Drivers of the mixer trucks — seen around town painted with cheeky phrases such as: “We see more forms than the IRS” — transferred sand, developing four and five stations for the work initially as the rain stopped at 9 a.m.

With the threat to the supply of sandbags, Konen had worked the night before to get more overnighted. But he also sought help from the county to obtain some from them, the Port of Walla Walla, the Washington State Penitentiary, even the Walla Walla Nursery that had made a bag purchase before the flood returned them to help.

As the deluge of volunteers turned out, Konen saw a need to help them, too.

The VFW supplied tables and canopies for volunteers to sit and eat.

As people flooded the area to help, Konen called on friend John Nelson of Nelson Construction to help supervise the site.

Quick thinking led to engineering of a system that created an entrance, a loading area and an exit, allowing vehicles to pull in at least three lanes wide and navigate out by the mountain of sand dug into by community members.

Konen dispatched trailers holding two pallets of bags to the south and dump truck loads of sandbags to the north. Four trips were made on the back roads to Waitsburg.

“We knew they were out there on their own,” Konen said.

Houses of a couple of the employees delivering sandbags were flooding as they helped others.

People of all ages came to help, with various amounts of time to dedicate during long lunches, breaks from classes at school, and the like.

“We make concrete by the truckload, crush and sift rock by the tons,” Konen described in a retrospective post on Facebook. “But every bag of that sand had to have a single person shovel it all in, another to hold the bag open and to close and stack and load it.”

It’s been a strong couple of years for Koncrete, Konen said. Expansion in Burbank, under the leadership of his cousin Ben Konen, has combined with the strong economy to double production. Within a month, the number of employees is expected to climb from 45 to 50.

With the rebuilding needed from the damage, that’s only expected to keep contractors like Koncrete busier, Konen said.

He said there was no way to keep a log of all of the people last week who stepped in to help. He estimates nearly 40 businesses, organizations and institutions contributed to the help at the 13th Avenue site.

“We had little time to think. Every minute that went by there (were) lives and property being threatened,” he said.

“We knew it was bad all over, and many did what they could where they were at. All Koncrete Industries had to offer was sand. The community did the rest.”