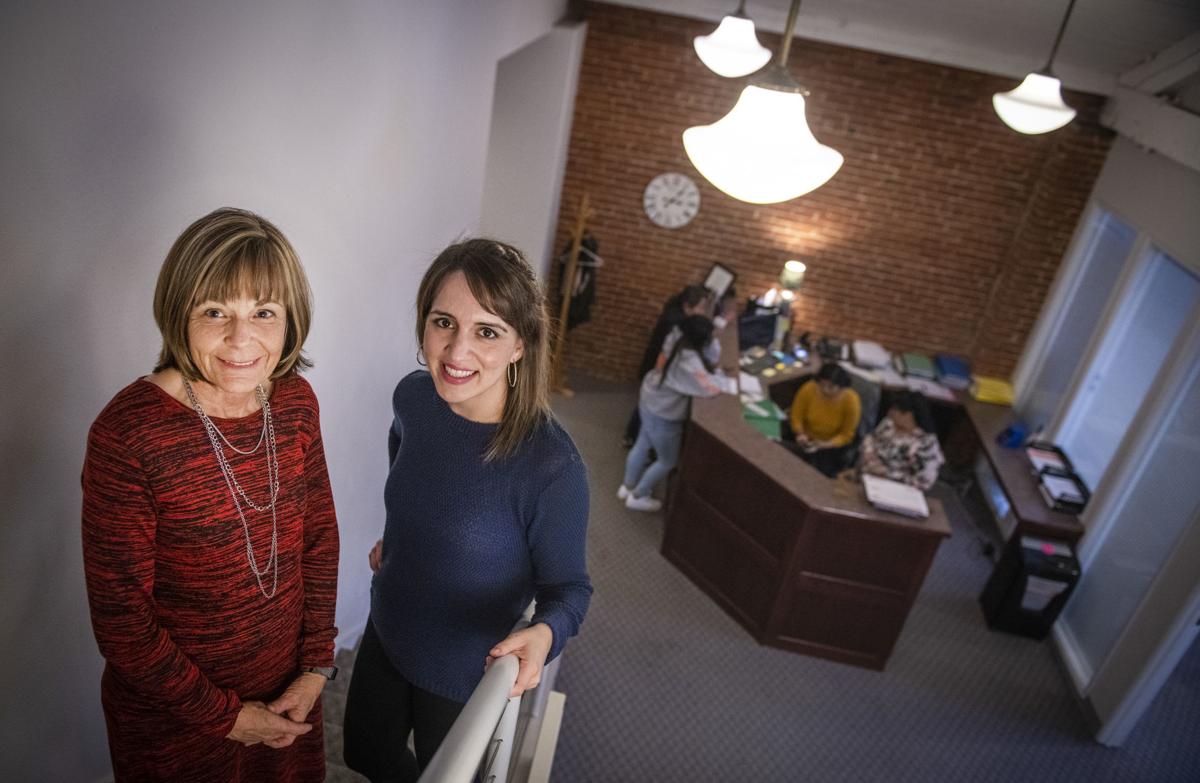 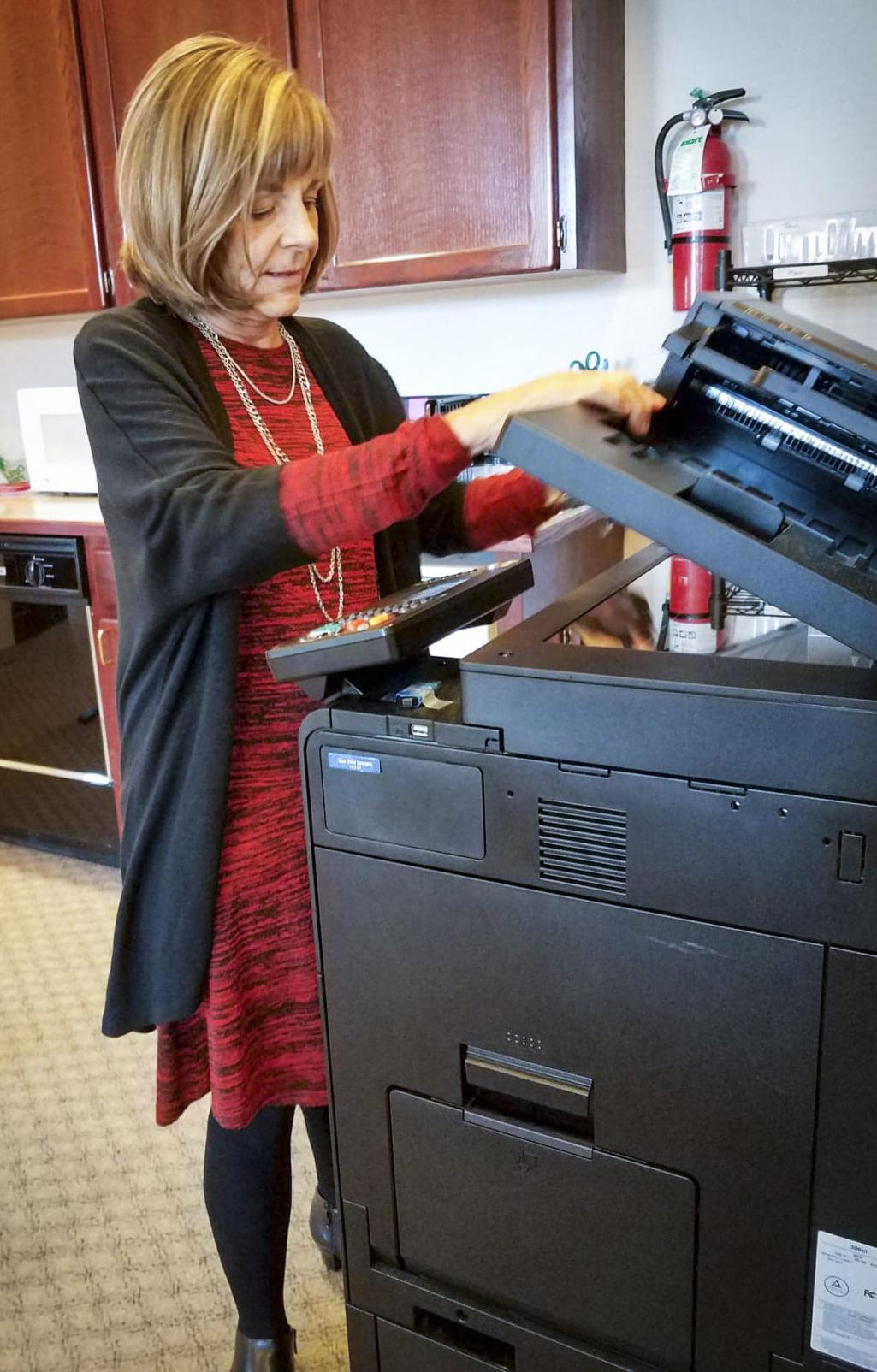 Wendy Hernandez, owner of Hernandez Immigration Law, makes a few of the multitude of copies required for client files. 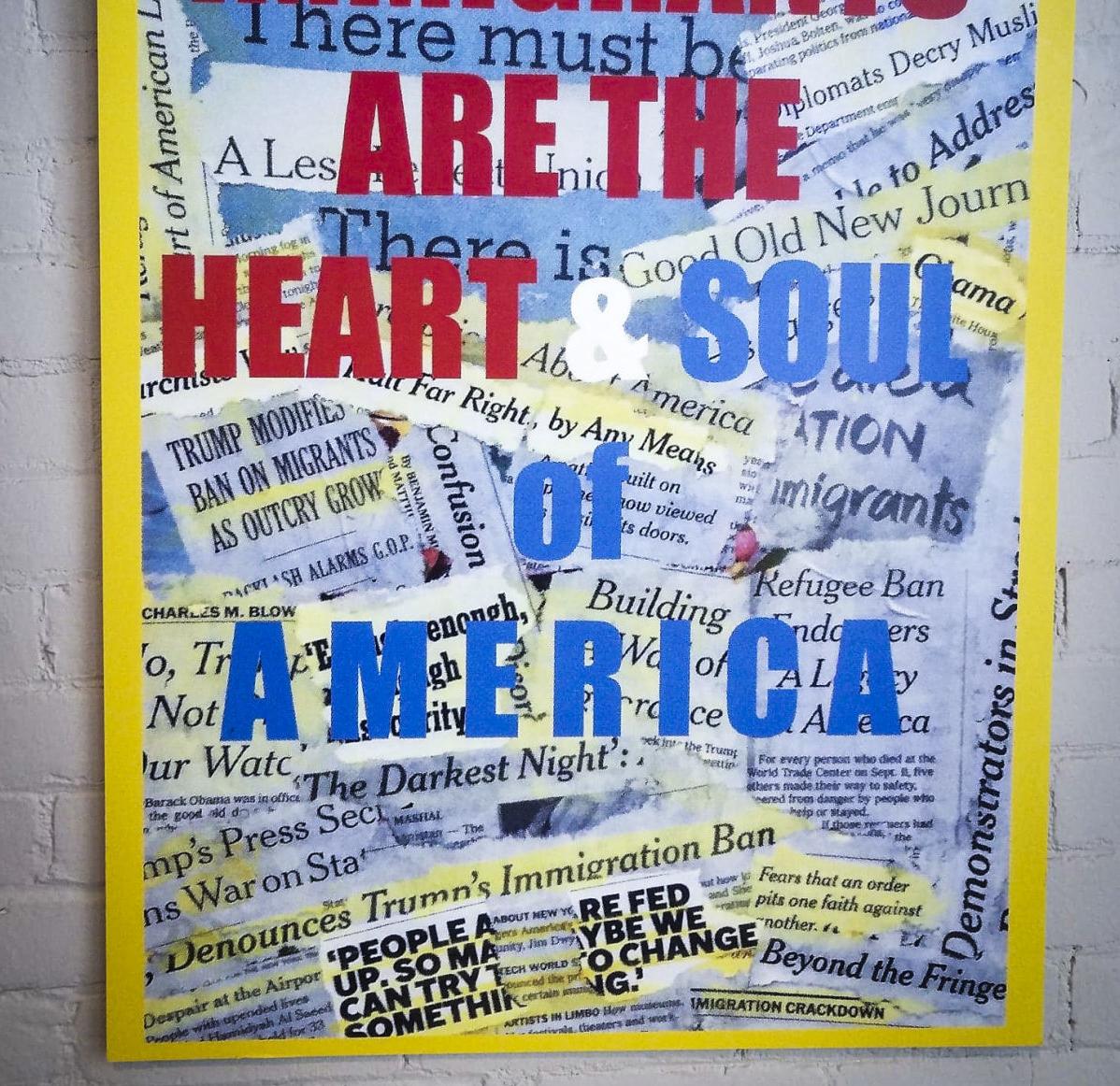 A poster in the attorneys office at Hernandez Immigration Law is a reminder of why the work there matters. 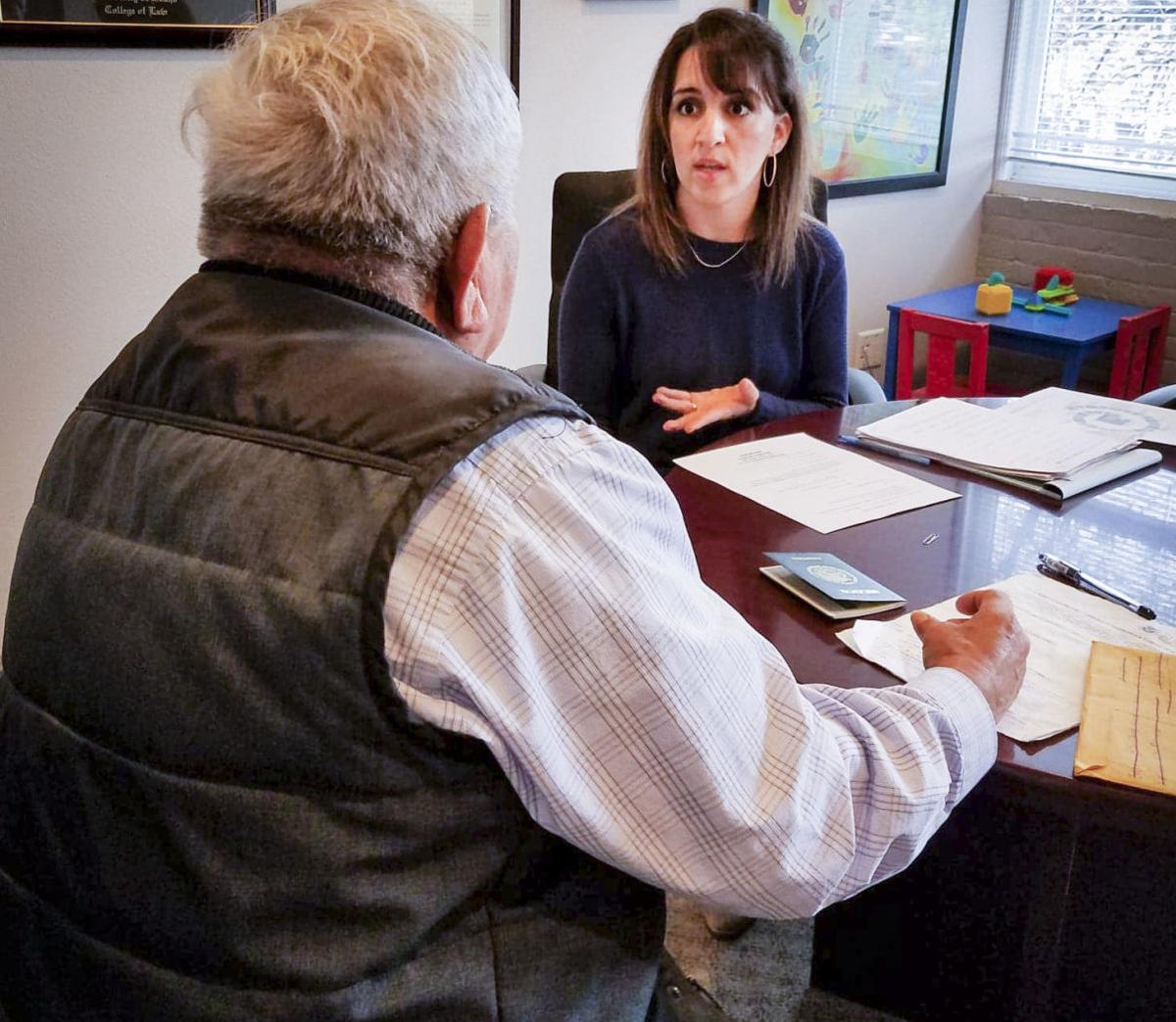 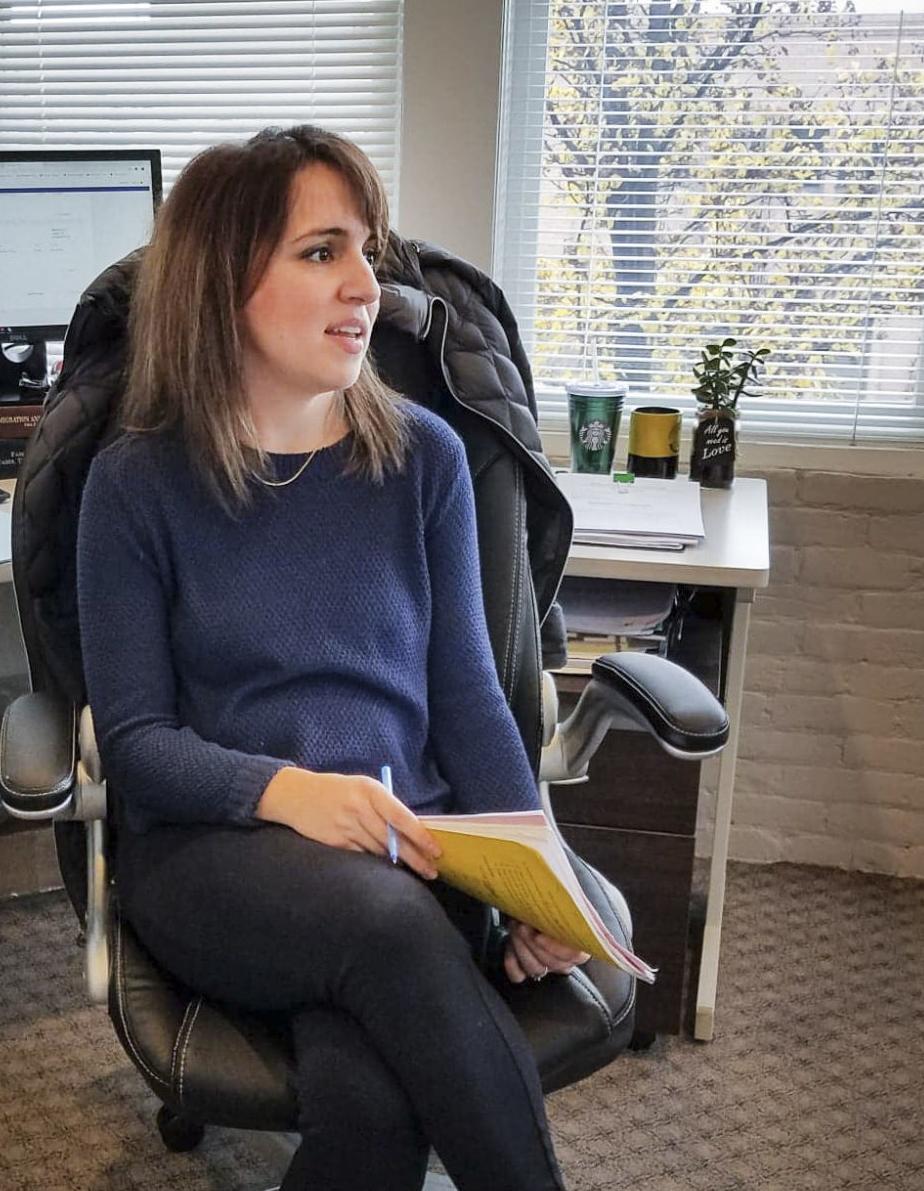 Bertha Clayton talks about her childhood in Waitsburg and how she was drawn into practicing immigration law.

Wendy Hernandez, owner of Hernandez Immigration Law, makes a few of the multitude of copies required for client files.

A poster in the attorneys office at Hernandez Immigration Law is a reminder of why the work there matters.

Bertha Clayton talks about her childhood in Waitsburg and how she was drawn into practicing immigration law.

“No more crimes,” Bertha Clayton said in Spanish, spreading her hands across the table in a gesture indicating totality.

Seated across from the attorney at Hernandez Immigration Law was a husband and wife on the upper end of middle age. Both nodded solemnly at Clayton’s words.

The Latino couple came to the Poplar Street law firm to seek help on the husband’s quest for American citizenship.

At the start of the 1 p.m. appointment Clayton let them know a newspaper reporter would be taking notes.

But, she added with a smile, the reporter doesn’t understand Spanish. The man and woman returned her smile and settled back more fully in their chairs.

Their story is not unfamiliar to Clayton — the family has been in the U.S. for years but the husband never pursued permanent citizenship although his wife successfully did so.

But, the man explained with a gentle shrug, President Donald Trump “is a little aggressive right now.”

They want to travel back to Mexico to see family, but it’s not a good idea without citizenship, according to Clayton.

And gaining that might be problematic, she explained to the room at large.

“He got a DUI in 2017, in Oregon. He went through a diversion program and probation ended this year.”

This situation is one example of the issues that arrive daily at the downtown firm founded by Wendy Hernandez in 2009 to help people navigate the changing pathways of immigration and citizenship.

Although Walla Walla is more than 1,000 miles from the Mexican border, it is not immune to rapidly-fluctuating immigration policies.

While not every policy proposal from Trump’s administration comes to fruition, those unsettle people for a long time, said Abigail Scholar, executive director of Central Washington Justice for our Neighbors.

Both organizations work to protect immigrants’ rights and access to justice.

With Walla Walla Valley’s substantial agricultural labor force largely populated by Latino workers — in the country both legally and not — the ripple effect of immigration action around the region and country is felt deeply here, Scholar said.

When Immigration and Customs Enforcement officers conduct raids and arrests, as has recently been the case at the courthouse in Ephrata, Wash., local migrant families take heed, she pointed out.

“Kids here won’t go to school that day, people won’t go to work. It’s really hard for them to trust they are safe in their community.”

Even those with coveted citizenship status, Scholar noted.

While this valley has escaped ICE raids so far, no one is taking that for granted, particularly during this lull in agricultural seasons, she said.

Even on this gray day, the environment feels serene and secure, like sitting in a neighbor’s living room.

The winter months mean less activity for her staff, Hernandez said, but that doesn’t mean things are slow.

“This is the calm before the storm,” she said.

“I know when the spring rush hits, we’re slammed.”

Angie Castillo is the first face people see when they arrive at the second-floor office.

The receptionist is the firm’s front-facing problem solver as she takes phone calls and greets clients.

Many come in nervous or distraught, highly anxious to see someone who can help, Castillo said.

At this day’s staff meeting, she sought advice from Hernandez about calls coming in reports of ICE raids.

Castillo is used to hearing the worry rush out at the sound of her sympathetic voice over the phone.

“I tell them I’m not an attorney,” she said, but there’s no ignoring the fear on the other end.

“It ranges from ‘My brother got deported,’ or ‘Can I apply for my parents?’ Others are in dire straits.”

Castillo said her most important task is to provide whatever peace she can in that moment.

Her family was born and raised in the U.S., and for a long time Castillo struggled to understand the big deal about legal immigration, she said.

She was working in college when Deferred Action for Childhood Arrivals was established, Castillo recalled.

“I took an interest in that, but when I came here, I really saw what it was all about.”

Legal assistant Jazmin Llanes is in charge of DACA cases at the law firm, as well as folks petitioning on behalf of a family member who are in the country illegally.

Both are highly emotional issues, Llanes said, and petitions under family preference rules can take months or years.

Multiple fees and steps are required, including going back to their home country and taking a risk of being denied re-entry, Llanes said.

Families are sometimes frantic with indecision, and legal staff is in limbo as courts postpone definitive action.

All of it is wearing, she added.

Immigration is a theme familiar to Llanes. Her family immigrated to the U.S. and came to Walla Walla when she was 12. Once she got to Walla Walla High School, Llanes dove into community involvement with a focus on helping other people.

At home she watched her parents build a new life.

“My parents had to learn English and they were working full time. At night we had dinner, then they took us to Garrison Night School with them.”

Thanks to those classes, her mom and dad are now fluent in English and both earned their GEDs, Llanes said.

Trying to help other people reach that same success is stressful, though.

“I go home, I’m still thinking about work. These are peoples’ lives,” she said.

“Work life, personal life, you can’t really tell where the line is.”

Still, Llanes loves the work, loves the contact with clients. But that makes it harder when people come in with high hopes but a low grasp of reality.

“You must know the law” on immigration, she said.

“Like having more than one illegal entry. We tell them ‘You have to be honest.’”

The law firm’s staff returns the favor, even when it’s hard.

And it’s hard a lot of the time.

After conferring with Hernandez, Clayton knew she would have to tell the couple in the conference room to stay put in Walla Walla and delay seeking citizenship for now.

“I think he’s got to wait,” Hernandez told her associate.

“I really think he should wait two more years. Do you think he’d have trouble coming back into the country?” she asked.

Her boss considered the question.

“He could. That’s the risk,” Hernandez said.

Clayton carried the disappointing news back to the husband and wife, but left them with steps to take, such as always carrying proof of having completed probation for the drunken driving charge.

And to stay far away from trouble.

The unvarnished truth is what she offers every client, Clayton said.

While growing up in Waitsburg, she learned not only the Spanish language so valuable for this job, but respect for her elders from her Mexico-born mom, Clayton said.

“I try to be as respectful and non judgemental as possible.”

Hernandez worries the energy to stay above the fray like that will lead to staff burnout, but she battles that on every front.

For instance, there’s the “gratitude board” for positive notes, she said.

“Whenever there is a good win, like someone got a green card we didn’t think would happen. Something to be really happy about, we put a note up on the board.”

Hernandez does spontaneous staff appreciation days, buying lunch for all. She also instituted a “no office drama” policy and a four-day work week to mitigate the labor of immigration work.

“In our world our people need family time,” she said.

“Their work day is really intense and some days we stay late.”

It’s an arduous time to work in immigration, Hernandez added.

“Every day it gets more difficult. Things take longer, the government puts up more and more roadblocks. It’s an incredibly stressful practice,” she said,

“It’s really a tough field … It’s become much harder to make ends meet as a practice.”

Still, Hernandez pointed out, no one works in immigration to get rich and that’s borne out in her office.

“I don’t think money is the motivation for most people, I think it’s the sense of doing things for other people and being appreciated that keeps people in the office.”