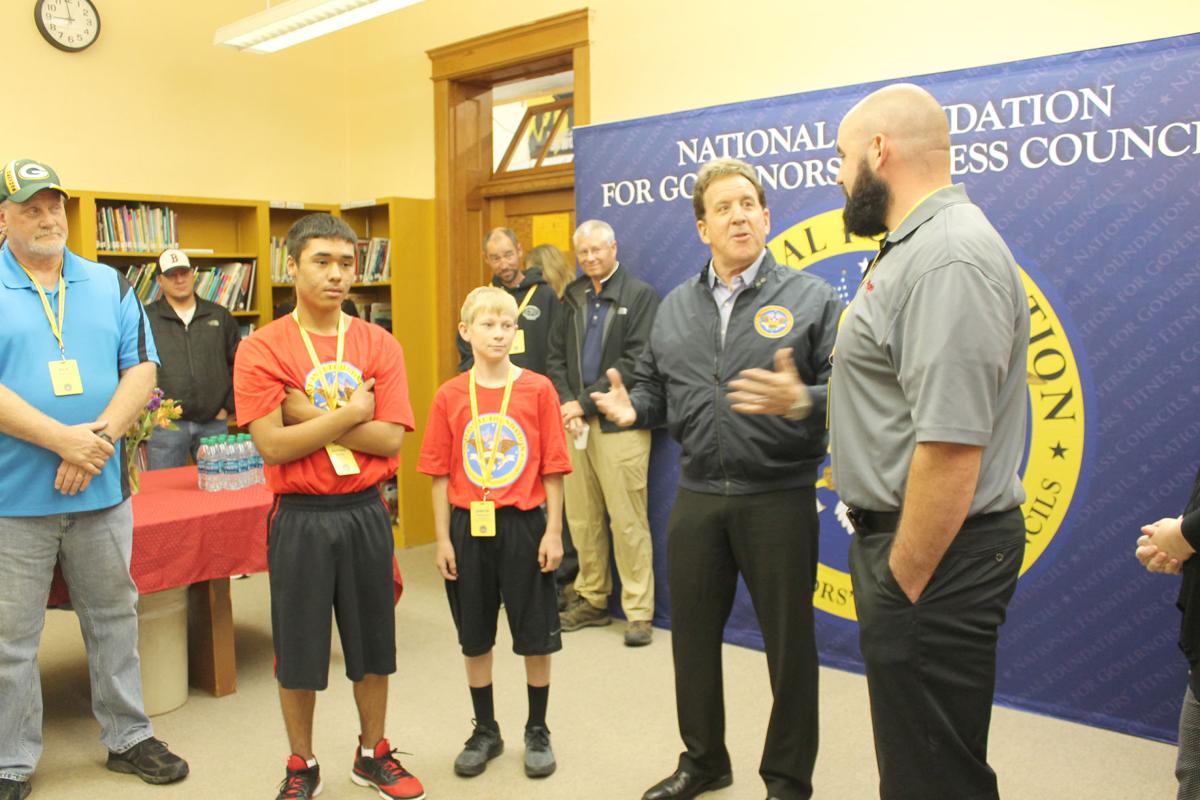 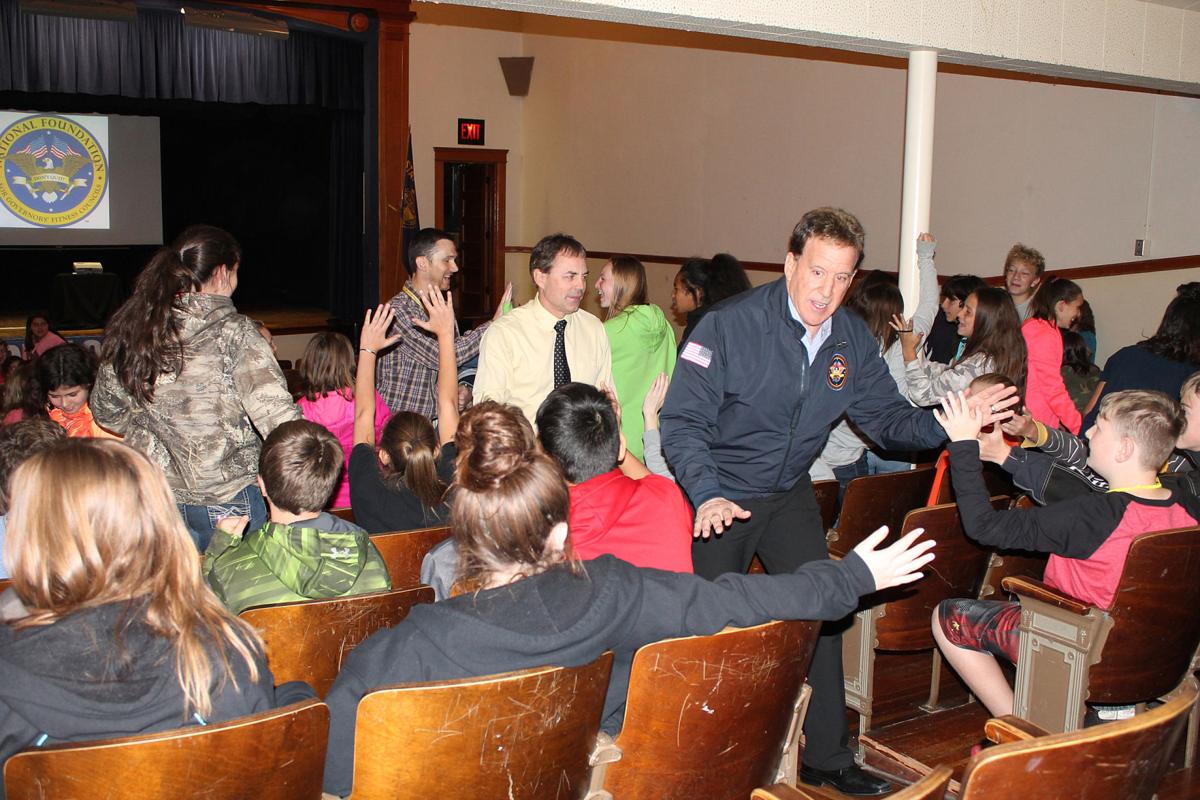 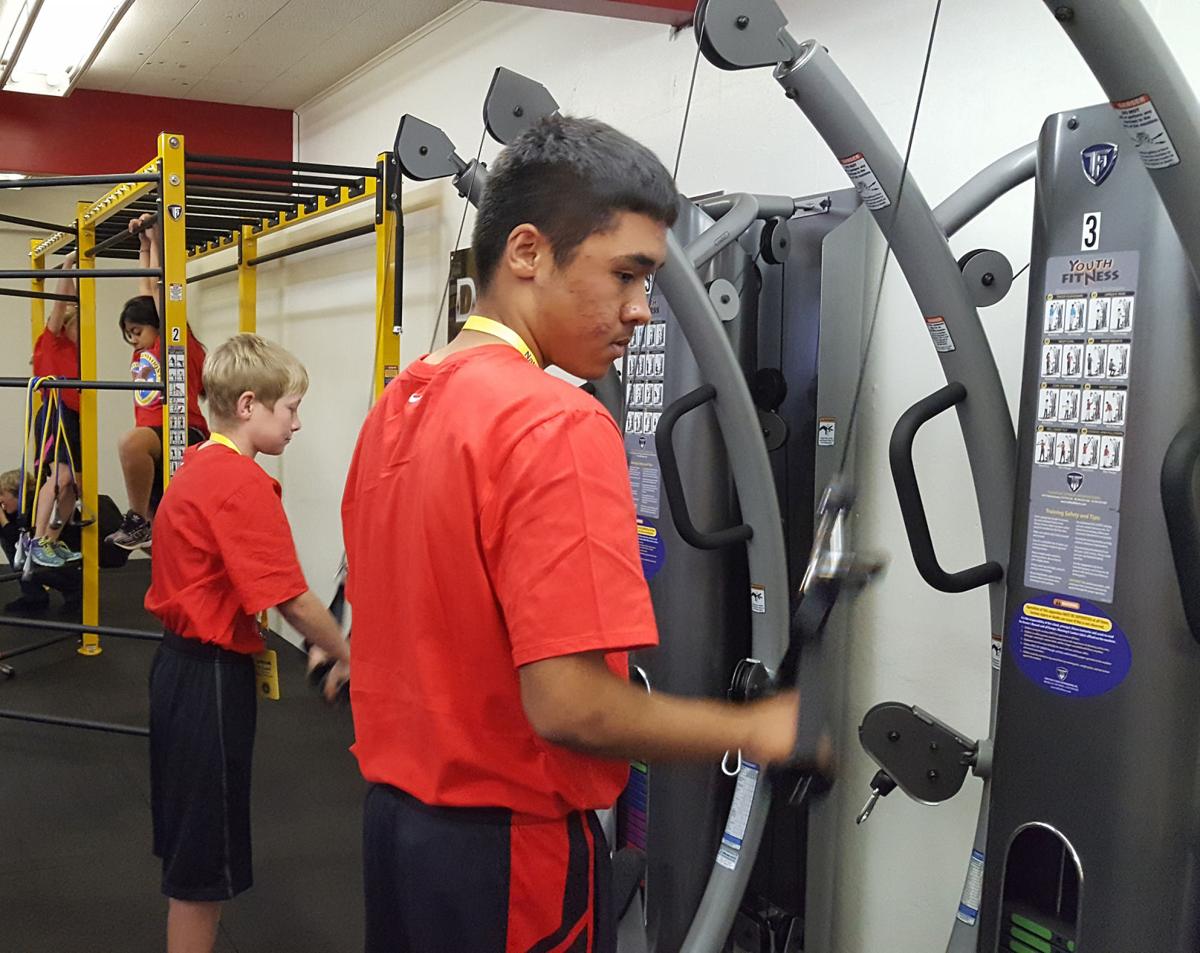 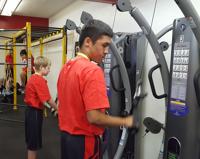 Josh McDowell, left, and Peyton Sincleir try out the fitness equipment at Weston Middle School. The two made the winning video that netted the school a $100,000 fitness center. 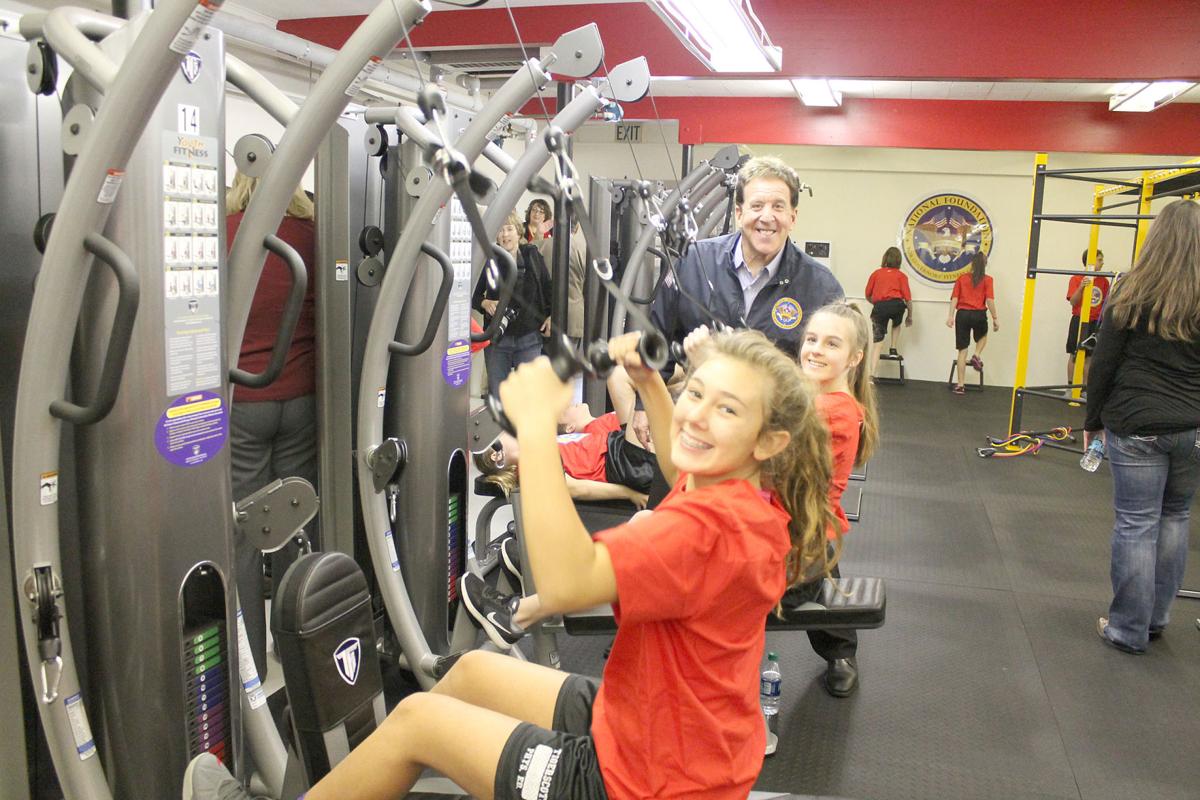 Jake Steinfeld, chairman of National Foundation for Governors’ Fitness Councils, poses with students working out on some of the 36 pieces of exercise equipment newly installed at the middle school.

Josh McDowell, left, and Peyton Sincleir try out the fitness equipment at Weston Middle School. The two made the winning video that netted the school a $100,000 fitness center.

Jake Steinfeld, chairman of National Foundation for Governors’ Fitness Councils, poses with students working out on some of the 36 pieces of exercise equipment newly installed at the middle school.

It was definitely the video that did it.

The digital presentation of a few minutes of creative levity with a serious message has turned an aging and gloomy basement hallway in Weston Middle School’s gym into a bright and lighted fitness center boasting 36 pieces of youth-sized cardio, strength-training and flexibility workout equipment.

On Wednesday, students, staff and assorted local officials were on hand to hear celebrity fitness trainer Jake Steinfeld announce why the video made in May by seventh-grade students Josh McDowell and Peyton Sincleir on behalf of Athena-Weston School District grabbed his attention.

Upon arriving at the middle school, which houses 250 kids in grades four through eight, Steinfeld told those in attendance he’s viewed hundreds of videos in the past five years. They come with applications from all over America, from big and small schools hoping to be awarded one of up to a dozen “DON’T QUIT! Fitness Center” installations Steinfeld oversees every year.

“We gets hundreds of responses, lots and lots of videos. People just had to tell us why their school should get a fitness center,” he told those gathered.

“Athena-Weston put together a video that was so simple, so direct, so on the money, I stopped the presses. When I saw this video it was, hands down, the best.”

Certainly good enough to land the district the $100,000 prize, one of three Oregon schools to do so.

Spreading the message and means of fitness across the nation is Steinfeld’s current mission. The personal fitness pioneer, TV personality, author, founder of Major League Lacrosse and creator of Body by Jake enterprise saw the writing on the wall more than a decade ago.

Steinfeld said he could see then childhood obesity was becoming an epidemic in America. As a once-obese boy with a severe stutter, the fitness magnate had found his own rescue in the set of barbells his father bought him when he was 13.

That was the turning point in his life, Steinfeld told an electrified audience in the school’s auditorium.

“I was always afraid to stand up in class … but when I started working out, my confidence, my stutter, everything got better.”

Exercise reduces fidgeting in class and increases focus, which leads to better test scores and your family’s pride in your grades, Steinfeld told the students who had loudly cheered his arrival at the school.

And that gives teens the confidence to avoid alcohol, drugs, tobacco and gangs, he added.

Steinfeld has put his moxie where his mouth is, becoming chairman of the California Governor’s Council on Physical Fitness & Sports from 2006 through 2011. He’s used the models he forged there as chairman of the National Foundation for Governors’ Fitness Councils since 2012. Under that organization’s “DON’T QUIT” campaign, Steinfeld has delivered fitness centers costing $100,000 apiece to schools in 24 states so far.

Each fitness center is financed with no use of tax dollars but through partnerships with companies such as Oregon-based Nike, the Coca-Cola Company and TuffStuff Equipment.

When it was Oregon’s turn to reach for the prize, Weston Middle School Principal Ann Vescio turned to enterprising entertainer Josh McDowell, now an eighth-grader.

He took about a week to write a script poking gentle fun at all that Weston is and isn’t. He then tagged buddy Peyton Sincleir, 14, to be the straight man to Josh’s humorous schtick.

The team filmed all around town, with Vescio running the camera. In the video that captured Steinfeld’s attention Josh and Peyton bench press a pair of fourth-graders, riff on “Coach Fun,” also known as physical education teacher Justin Funderburk, and point out the tiny town’s isolation and aged school facilities — it’s not Gold’s Gym, it “Old’s Gym,” for example.

Weston, Josh says in the video, is so obviously “out in the middle of nowhere.” The teens lean, arms crossed, against hay bales out in a field. They use a long shot to size up the town of 700 residents, and assets like Weston’s diminutive skate park.

By the very definition of the word the theme of the video is “wry,” yet Steinfeld said he heard the message it delivers: the size of the town and its spot in the middle of wheat fields does not offer an opportunity to exercise  with specialized equipment.

“I loved that video and what they were talking about,” Steinfeld said Wednesday.

By then he was standing in the new fitness center, surrounded by three dozen students in matching shirts who were trying out each of the 36 equipment pieces in rotations.

“They were explaining that even though this is a little school, they deserve good things, too.”

It’s true, what Josh and Peyton say in the video, Steinfeld added.

“We’re in the middle of nowhere, that’s for sure. But I love going to these places, places that don’t have all the trimmings.”

When Steinfeld’s organization gives a school a fitness center, he hands over the keys free and clear, he said.

“This is not a grant, this is a gift, you know what I mean? There shouldn’t be strings attached.”

Steinfeld said he is proud of Weston Middle School, and Josh and Peyton, for what the businessman-turned-philanthropist calls “taking the shot.”

Josh is glad, as well.

“I didn’t think it would be this nice,” Josh said of the new machinery, flooring and paint job.

“But it fits us perfectly.”