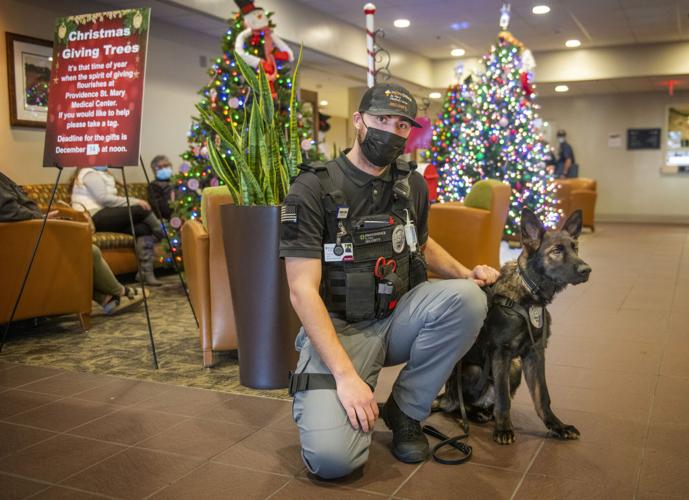 Providence St. Mary Medical Center security officer Cole Smith poses with Mylo in one of the lobbies at the hospital, Tuesday, Dec. 4, 2021. 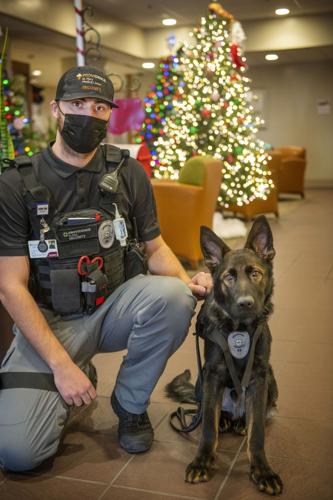 Providence St. Mary security officer Cole Smith poses with Mylo in one of the lobbies at the hospital, Tuesday, Dec. 4, 2021. 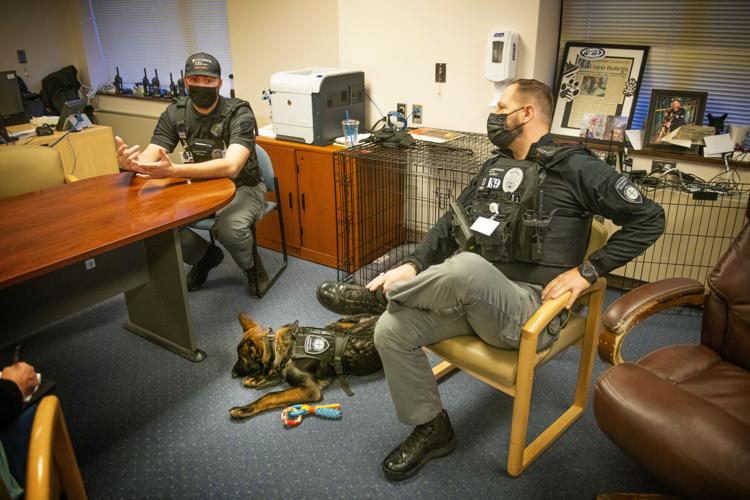 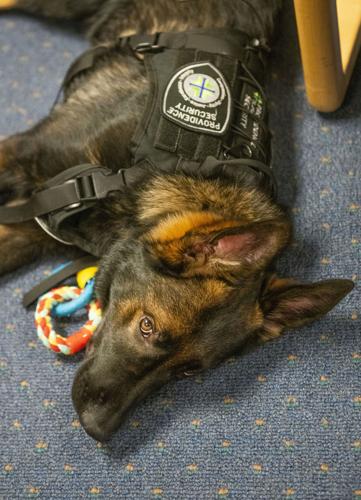 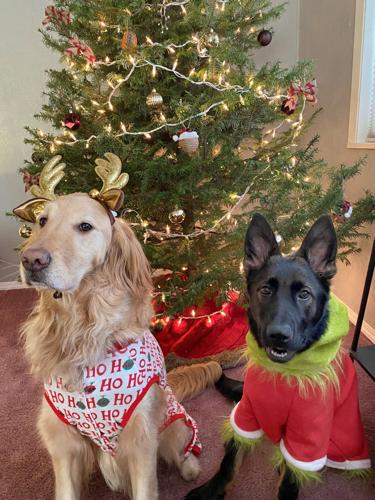 Providence St. Mary Medical Center security officer Cole Smith poses with Mylo in one of the lobbies at the hospital, Tuesday, Dec. 4, 2021.

Providence St. Mary security officer Cole Smith poses with Mylo in one of the lobbies at the hospital, Tuesday, Dec. 4, 2021.

As tempting as it is to offer chin scratches and ear rubs to Providence St. Mary Medical Center’s newest security officer, it’s really better to let him do his job.

Or, rather, continue the training for his job.

Like his mentor, Mylo is handsome in his tan and black fur over which a sturdy black vest is fitted, easily denoting the pup as a security employee.

More hospitals across the nation are using security dogs to detect contraband, deter violence and help address possible threats. The Walla Walla facility is one of four hospitals in Washington using the K-9 model, Leathers said.

Providence started its program in 2019 when coordinator Mike Smith left a law enforcement career in Oregon to join the hospital’s staff. Axel came on board about nine months later, and together the pair made a significant impact in enhancing the security there, Leathers said.

“The K-9 program is all about safety, to protect everyone against violence. It’s sad but true that health care, in general, has the highest risk of workplace violence except for law enforcement.”

It wasn’t always so in Walla Walla, she said.

“I never thought this time would come. There was a time the public respected doctors and nurses, and that has eroded over time.”

Community-wide stress has bubbled up from the COVID-19 pandemic, permeating every layer of life. People who struggle to cope and lack support can end up in negative behavorial situations.

Here, like elsewhere, the hospital has become the de facto emergency mental health center. That can bring in people who are dangerous to themselves and others, Leathers said.

In 2019, Axel was on his first night on the job when a man entered St. Mary, filled with ire and using threatening behavior. He refused to leave the emergency department’s lobby, Smith recalled.

When Smith noticed the man had stashed a pen up his sleeve, he assumed the intent was to try and injure the dog with it. Because the lobby was empty, however, time was on his and Axel’s side. They could wait for the police department to arrive.

Although in this instance the angry man had to be taken out under threat of Taser by police, the victory was that Axel did not have to bite him, Smith explained.

“The goal is not to get a bite; the goal is to deter.”

In other cases, staff has been subjected to threats of being hurt or killed, Leathers said.

When such an offender sees an on-alert — and large — dog clearly waiting for a command from its handler, “they back down,” she said.

Just walking Axel through the building is a visible reminder security measures are in place and at the ready. That alone can help keep the peace and definitely makes employees feel safer, security staff agreed.

With a generous boost from Providence St. Mary Foundation and a donation from an anonymous donor, the program was expanded this fall to purchase Mylo.

Mylo, born in June in Berlin, is a purebred German shepherd whose bloodlines of military and security dogs can be traced back to the WWII era, said hospital spokeswoman, Kathleen Obenland, noting the puppy was selected for his stability, focus and fearlessness.

That can only bode well for when both Cole Smith and Mylo attend specialized formal training next summer. In the meantime, Mylo’s supervisors expect that coming to work at the hospital on a regular schedule will help desensitize him to everyday sounds, smells and sights.

“Mylo will be used to anything in the hospital,” Cole Smith said, listing the sounds of wheelchairs in the halls, the castors on large carts clicking along, the whir of elevators and the seldom-silent PA system.

In the emergency department, it’s important a security dog can learn to absorb the beeping and alarms of various monitors as background noise so that a voice raised in anger will become the focus in a potentially bad situation.

Hospital life includes acclimating to humans wearing face shields and operating garb, and adjusting to his own vest.

“The first week, I’d kennel him up, and when I came back the vest was off. Now he knows what it means when I’m putting it on him,” Cole Smith said.

“We want him to know when the vest goes on, it’s work time. When it goes off, it’s time to de-stress,” Mike Smith said.

Experts predict the use of K-9 units within health care facilities will increase as violence in the health care industry increases, noted Paul Sarnese, president for the International Association for Healthcare Security and Safety.

In writing for the Journal of Healthcare Protection Management, Sarnese called security dogs a cost-effective and wise investment, each being able to work eight to 10 years.

Research shows facilities that have deployed K-9 units have seen a reduction in crime and violence. A trained dog can not only patrol the exterior of a health care facility but also the patient care and service areas, he wrote in 2016.

The new security officer at St. Mary is already earning an A-plus in having fun while off work, Cole Smith said.

Mylo’s bestie is Benson, the golden retriever at home. And he gets to mix it up with Axel when both working dogs are off the clock.

The puppy is even tolerant of the new outfit his handler put him in for a Christmas photo shoot.

“He likes it,” Cole Smith insisted, passing around his phone showing pictures of a stoic Mylo wearing a Grinch costume trimmed in red fir and Benson dressed in “Ho Ho Ho.” And antlers, of course.

This Christmas season is likely to bring just what every puppy wants, Cole Smith added.

“I’ve had all these caregivers ask me what kind of treats he’d like.”