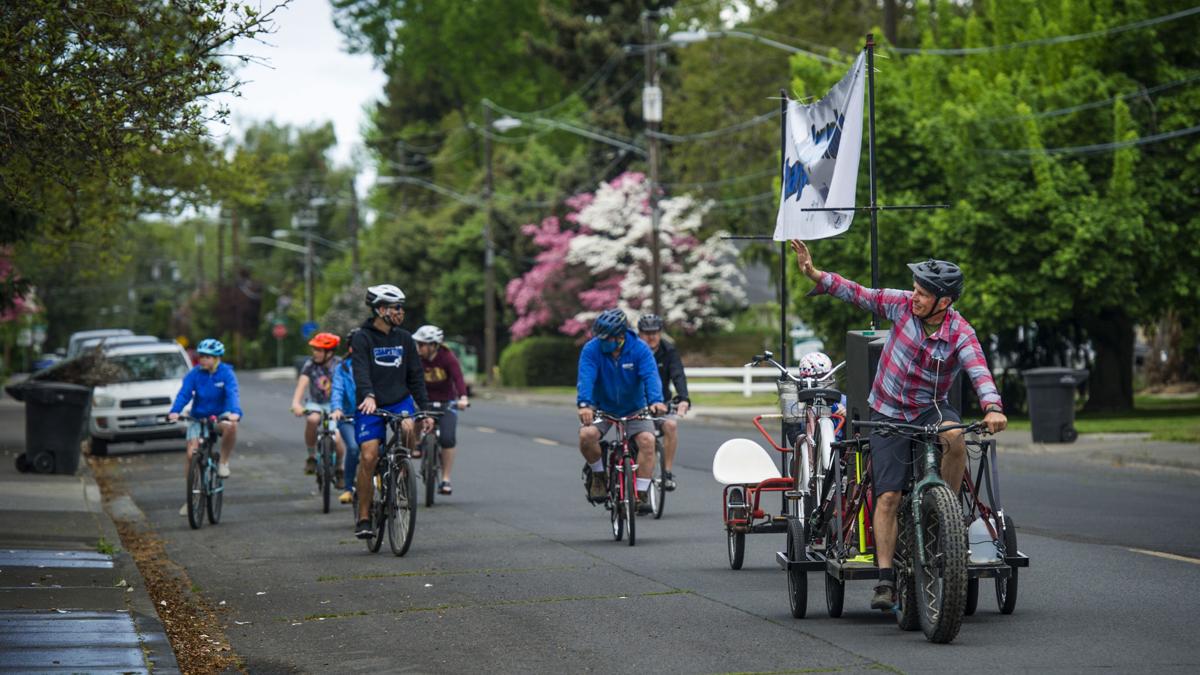 With “We Are Family” blaring from loudspeakers, Charles Stanger and group of cyclists from Sharpstein Elementary cruise up Bryant Avenue to connect with students Monday morning. 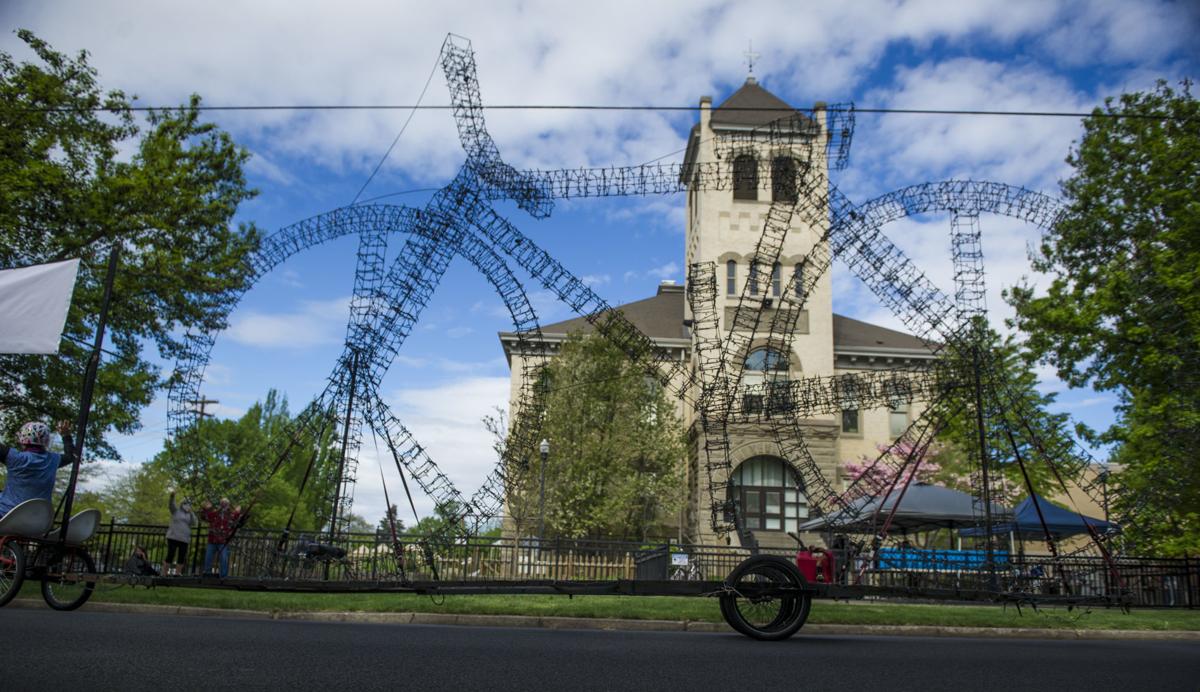 Charles Stanger’s huge light-up bike moves in front of Sharpstein Elementary prior to cruising local neighborhoods Monday. The "bike” was left at the school during the parade because of its weight.

With “We Are Family” blaring from loudspeakers, Charles Stanger and group of cyclists from Sharpstein Elementary cruise up Bryant Avenue to connect with students Monday morning.

Charles Stanger’s huge light-up bike moves in front of Sharpstein Elementary prior to cruising local neighborhoods Monday. The "bike” was left at the school during the parade because of its weight.

Charles Stanger, a local cyclist known for blaring music as he tows a 60-foot bicycle sculpture through the streets, led a bike parade down through the Sharpstein Elementary School neighborhood Monday.

While kids picked up their weekly homework packets at the school, bikers would circle to pick up more riders who hoped to join.

Faculty and some of their kids looped through neighborhoods to boost the morale of students.

Stanger used pedal power to tow a trailer carrying two speakers and a generator. A banner bike with pusher seats in the back, connected to the trailer, held a banner that read ‘Sharpstein Stompers: We Are Family.’

He also brought the large-scale mobile bike sculpture that was displayed at the school.

The PTA piloted the idea of the school’s first-ever bike parade with Stanger on the suggestion of board member Chelsea Tennyson.

Faculty and parents have been working on ways to keep students connected while maintaining health and safety during the coronavirus pandemic and Gov. Jay Inslee’s “Stay Home, Stay Healthy” order. As part of the initiative schools are closed for the rest of the academic year as students complete their work from their homes.

Rob Griffith, a second-grade teacher, joined the parade and rode for two and a half hours.

He said it was a chance for everyone to feel like life was normal, and forget about the pandemic and the absence of face-to-face schooling.

“It was an extended time where we just kind of forgot about this pressure that we feel pressing in … with all of the worries of the pandemic, and the economy, and work, and all that. We just forgot about that,” he said.

PTA President Abby Juhasz said she was so grateful for Stanger, Principal Maria Garcia and everyone who participated in putting the event on. She said Stanger donated his time and took the day off work to do this for the community.

Her daughter, Lexa, who is in third grade, was thrilled to see her teachers and friends, she said.

“To see so much excitement on her face and see her light up in a way … It’s been a little while since I’ve seen that,” she said.

Jason Gillen and his two sons, Levi, a Sharpstein fourth-grader, and Jake, a second-grader, joined the parade as it passed by their house.

“Because they’ve been locked up all day... for weeks on end, my son decided to pull my bike out of the dust. I haven’t ridden it for a while. I was like ‘heck yeah I’ll ride with you,’” Gillen said.

Garcia said the idea was to send a message to students.

“Our school community is still here, even though we are not all here together — that we will be together someday and we will work hard to make sure we stay connected,” she said.

John Kiefel, Sharpstein’s head custodian, rode the whole parade. The event exceeded his expectations as students reacted with so much excitement.

Dogs peeped through windows, gardeners started dancing, a bus drove by honking and kids ran out of the house jumping up and down when the bikers passed by.

Stanger said he saw one child with a little red cape and mask, like Flash. When the group rode by him, he didn’t look very excited.

As the parade of bicycles turned to the other side of the block, there Flash was, with his bike and his cape, he said.

“He rode the whole time with us,” Stanger said.

Music played throughout the neighborhoods. During a regular school day, all grades join together in exercise set to music every morning in the gym. During the bike parade the same songs played, reminding the kids of their usual routine, Garcia said.

“It’s a very heartwarming experience to see the frown and to see their eyes, and then see them smile and see them moving. Loud music makes people move,” Stanger said.