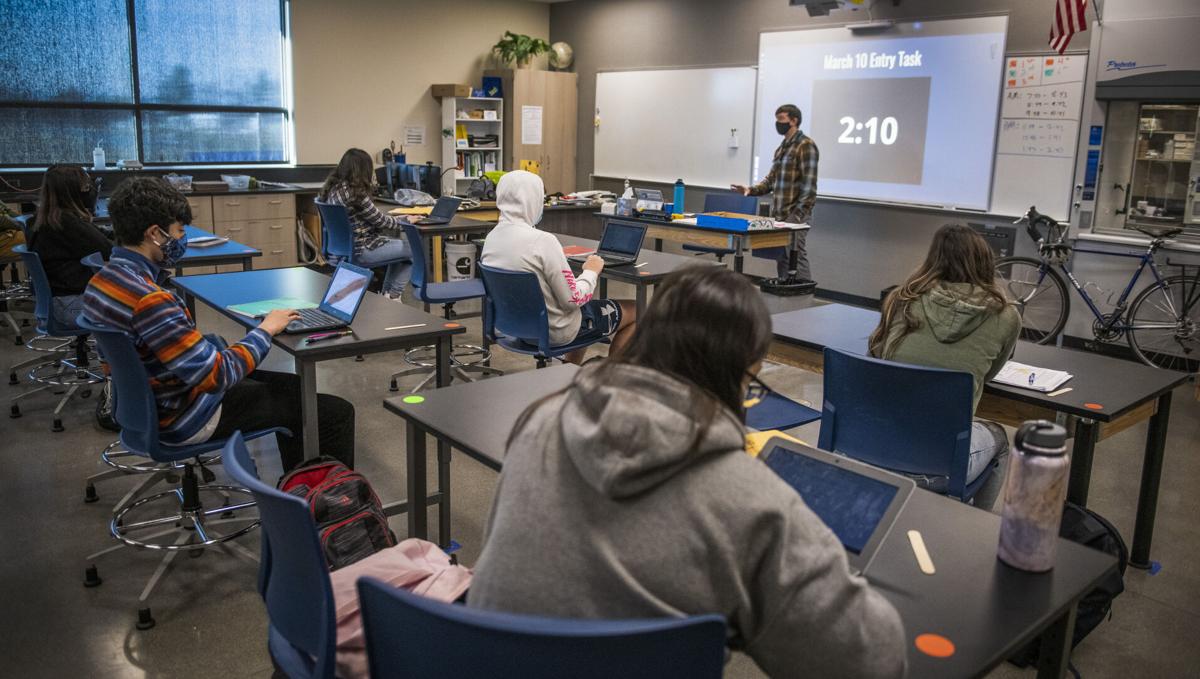 Masked chemistry teacher Clayton Hudiburg addresses equally masked students on the first day of in-person classes at Walla Walla High School for all grades, March 10, 2021. Masks in schools was the hot topic at the school district’s Aug. 17 board meeting. 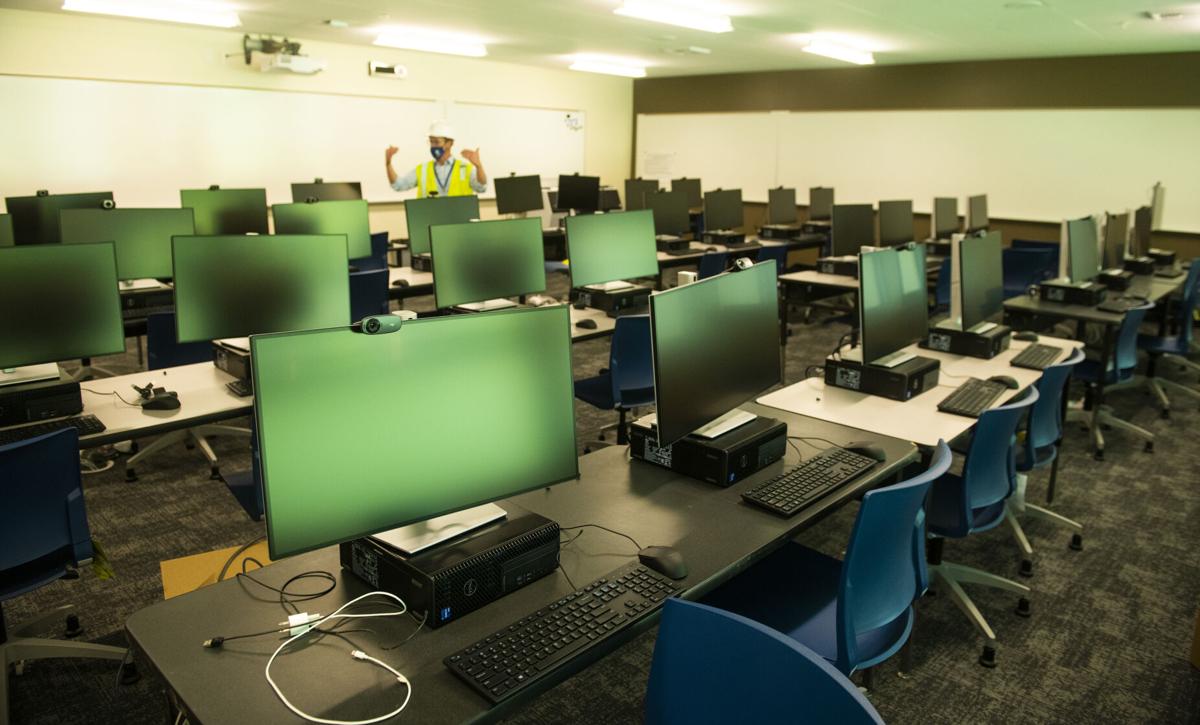 Walla Walla Public Schools Superintendent Wade Smith is ready to open the district’s schools on Sept. 7 for full-day in-person learning, despite a nearby district’s struggles in doing the same thing.

The Dayton School District had to close for grades 6-12 due to a COVID-19 outbreak.

More than 30 students have been quarantined or have been out sick in Dayton since the district opened on Aug. 24.

Dayton Superintendent Guy Strot said Thursday, Sept. 2, that it is unclear if the outbreak occurred at school or away from school. He said Columbia County Public Health is doing contact tracing.

As of the time this story was published, attempts to reach Columbia County Public Health have been unsuccessful.

Smith expressed confidence in his own district’s safety plans.

“I can’t speak for Dayton and the situation there,” Smith said. “What I can tell you is we’re taking the safety of our kids very seriously. We’re enforcing the mask mandate, we’re striving to maintain that three-foot (rule for social distancing of students in the classroom) wherever and whenever possible.”

Smith said the district is taking other steps as well.

“We’re keeping up our cleaning, our hygiene, all of that,” Smith said. “We are maximizing air flow, maximizing filtration.”

The district was able to keep students distanced 3 feet apart in elementary and middle schools last year when it switched to full days for those students.

However, Walla Walla High School students never did return to full days for multiple reasons. A remodeling construction project at the school has put about half of its buildings out of commission at a time.

This made fitting everyone in while keeping them distanced difficult.

At the time, the rule requiring 3 feet of distancing between students was just that, a rule that was required to be followed. Now, however, it is more of a target.

In fact, Washington Superintendent of Public Instruction Chris Reykdal announced all schools must offer in-person learning to families that wish it or lose state funding.

Not being able to distance students 3 feet apart is not to be used as an excuse.

Another reason high school students did not return to full days is there were only about seven weeks left of the school year and students had just switched to a hybrid schedule.

Smith said making a move would force the school to develop new student schedules from scratch, which in some cases would have involved splitting some classes up and students changing teachers with only seven weeks left of an already chaotic year.

Now, Smith said, the school has had all summer to figure things out.

“This has allowed Principal (Ron) Higgins the summer months to adjust class sizes and adjust teachers and where they’re teaching to make sure the ones with the highest class load are in the largest classrooms,” Smith said.

Administration staff, such as Smith, are not the only ones wanting to get students back in schools. Keith Swanson, the president of the teachers union that represents Walla Walla, said teachers are still supportive of opening Sept. 7.

“Teachers are really excited to see their students, even if at the same time they are concerned about the current COVID situation,” Swanson said. “I think it’s really important to build back those face-to-face relationships between teachers and students.”

Swanson added that he hopes families are getting vaccinated.

Smith also said there are things families can do to help prevent an outbreak in Walla Walla’s schools.

“It’s all about partnerships. Partnerships with our staff, our kids and our parents and families,” Smith said. “If you, or your kid or student are not feeling well, do not come to school. We have an amazing testing capacity and can come to your house and test you for COVID … When in doubt, give us a call. Wear masks and practice distancing.”

Still, what’s happening in Dayton can’t be ignored. Dayton was able to fit all students in classrooms at the start of last school year when the mandate was to keep students 6 feet apart. That district had a lot of success last year, staying in-person for most of the year.

But distance learning is back for many of Dayton’s students, and Smith acknowledges the necessity of preparing for the same thing in Walla Walla.

He said plans have been developed to return single classes, or a whole school, to in-person learning if needed.

Smith also said he hopes that a majority of staff being vaccinated will help keep everyone safe as well. He said that since the mandate from Gov. Jay Inslee that all school staff be vaccinated — with health and religious exemptions in place — he hasn’t personally had anyone call him to say they are quitting.

Walla Walla Public Schools safety protocols, including plans in case a return to distance learning is needed, can be found at ubne.ws/wwps-safety.

Dayton students head back to the classroom after COVID-19 outbreak

The Dayton School District reopened its middle and high school Monday, Sept. 13, after all but two quarantined staff members were able to return to work. Dixie Elementary School will welcome its students back Wednesday, Sept. 15.