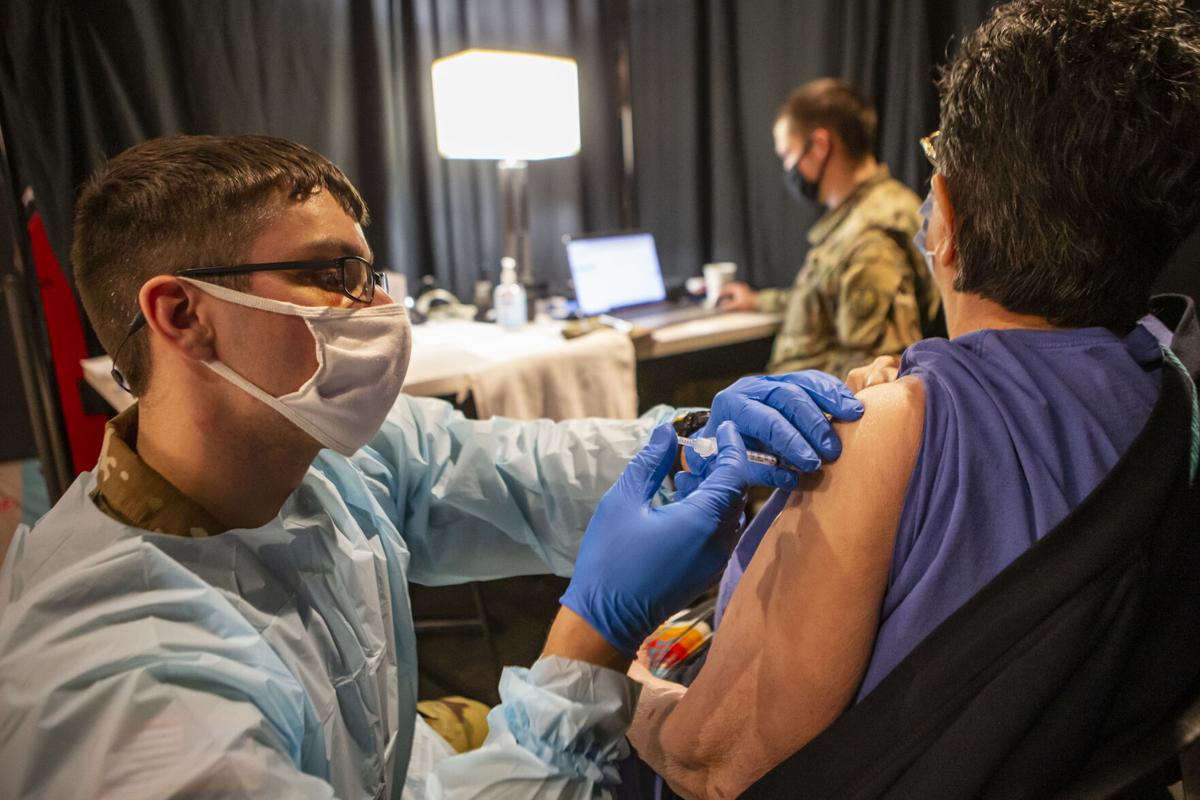 Cpl. John Shown with the Oregon National Guard administers a COVID-19 vaccine to Mary Freeman during a vaccination run by Yellowhawk Tribal Health Care Center at Wildhorse Resort & Casino in Mission on Feb. 23, 2021. 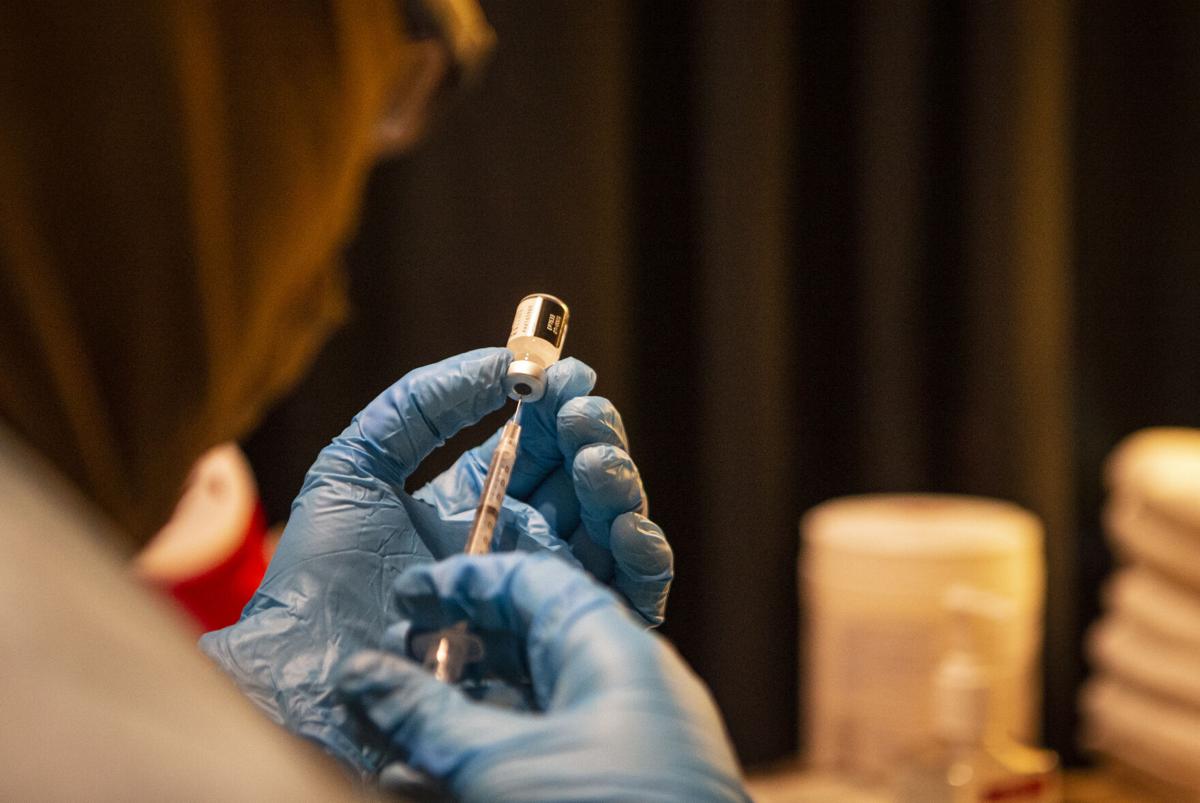 A member of the Oregon National Guard draws up a dose of the Pfizer COVID-19 vaccine during a mass vaccination event April 13, 2021, at Wildhorse Resort & Casino in Mission.

Cpl. John Shown with the Oregon National Guard administers a COVID-19 vaccine to Mary Freeman during a vaccination run by Yellowhawk Tribal Health Care Center at Wildhorse Resort & Casino in Mission on Feb. 23, 2021.

A member of the Oregon National Guard draws up a dose of the Pfizer COVID-19 vaccine during a mass vaccination event April 13, 2021, at Wildhorse Resort & Casino in Mission.

SALEM — Eastern Oregon lawmakers are seeking data that has long remained out of Umatilla County’s grasp in a move to correct the county’s COVID-19 vaccination rate.

In a letter to Gov. Kate Brown’s office last week, lawmakers noted many Umatilla County residents have been vaccinated by Washington health care providers and veteran health services in Walla Walla. Others were vaccinated on the Confederated Tribes of the Umatilla Indian Reservation at mass vaccine clinics with the Oregon National Guard, which reports its data to the U.S. Centers for Disease Control and Prevention, officials say.

Much of that data has yet to be reported to the state, officials say, which has “unfairly impacted” the county’s progress toward reopening as it remains among the lowest ranked counties statewide for vaccinations per capita.

“By not counting them, it makes it much more difficult, if not impossible, for Umatilla County to ... reach the state’s required vaccination levels,” said the letter to Brown’s office, bearing the signatures of Sen. Bill Hansell, R-Athena, Rep. Bobby Levy, R-Echo, and Rep. Greg Smith, R-Heppner. “They are counted on one side of the equation as citizens, but not on the other as being vaccinated.”

But now that vaccine rates play a direct role in a county’s reopening status, officials are seeking the data to “move the dial” further toward reopening, Hansell said.

“You want accuracy,” said Hansell, who was vaccinated in Walla Walla. “Whether or not it gets us to 90% or 75%, to me it doesn’t matter. You want to be as accurate as to what the results are. And right now it isn’t.”

The state recently announced that counties are eligible to move to lower risk when 65% of residents over the age of 16 have received at least their first shot. The move would lift restrictions on indoor gatherings and commerce.

And when the state reaches 70% of residents partially vaccinated, capacity limits on most public activities statewide would be lifted — a benchmark Brown said she expects the state will meet sometime in June.

Umatilla County officials say confirming this data gives the county a chance to move down a risk category and lift restrictions. But even if the data was corrected, it’s unlikely to make a significant dent and move the county beyond 65%, officials say.

“Yes, it would help,” said Umatilla County Commissioner George Murdock. “But we’d still be nowhere near 65%.”

According to Umatilla County Public Health Director Joe Fiumara, county health officials recently obtained data from the federal government and the health department in Walla Walla County suggesting Umatilla County’s real vaccine percentage should be about 5% higher, up to approximately 39%.

But even that data is limited, Fiumara said. It does not include some health care providers in Washington, such as local pharmacies and Jonathan M. Wainwright Memorial VA Medical Center in Walla Walla.

“It’s not a huge jump,” Fiumara said of the data. “But it also tells us there’s more of this out there.”

He added: “We don’t know how high that number will get. And we don’t want our lack of trying to get this information to be a hold up for the county being able to open up.”

Hansell said he recognized that residents will see no impact if correcting the data doesn’t move the county to lower risk, but said the county cannot get to 65% without getting to 39%.

“I had no illusions that we’re going to get to 90% if everybody was counted,” he said. “But there are thousands of people out there for sure who are not being counted, and we need to count them.”

Fiumara said it’s more likely restrictions will be lifted by the state reaching the 70% benchmark than the county reaching 65%. But there are other reasons for gathering the data, as higher percentages can “give people an incentive to take that initiative” and get vaccinated, he said.

“I think one of the things that is hurting our vaccination process is the assumption that nobody else is getting it,” he said. “And we don’t think that’s actually the case. And if we can get this data together and show that there’s actually more people who have taken it than they think, it might change a few minds, specifically for the folks on the fence.”

County health officials now are reaching out to facilities throughout Southeastern Washington to “get a more complete picture of where we’re at as a county,” Fiumara said.

In all, 22,026 Umatilla County residents have been vaccinated against COVID-19, according to state health data. The county is ranked second lowest in vaccinations per 10,000 people, the data shows.