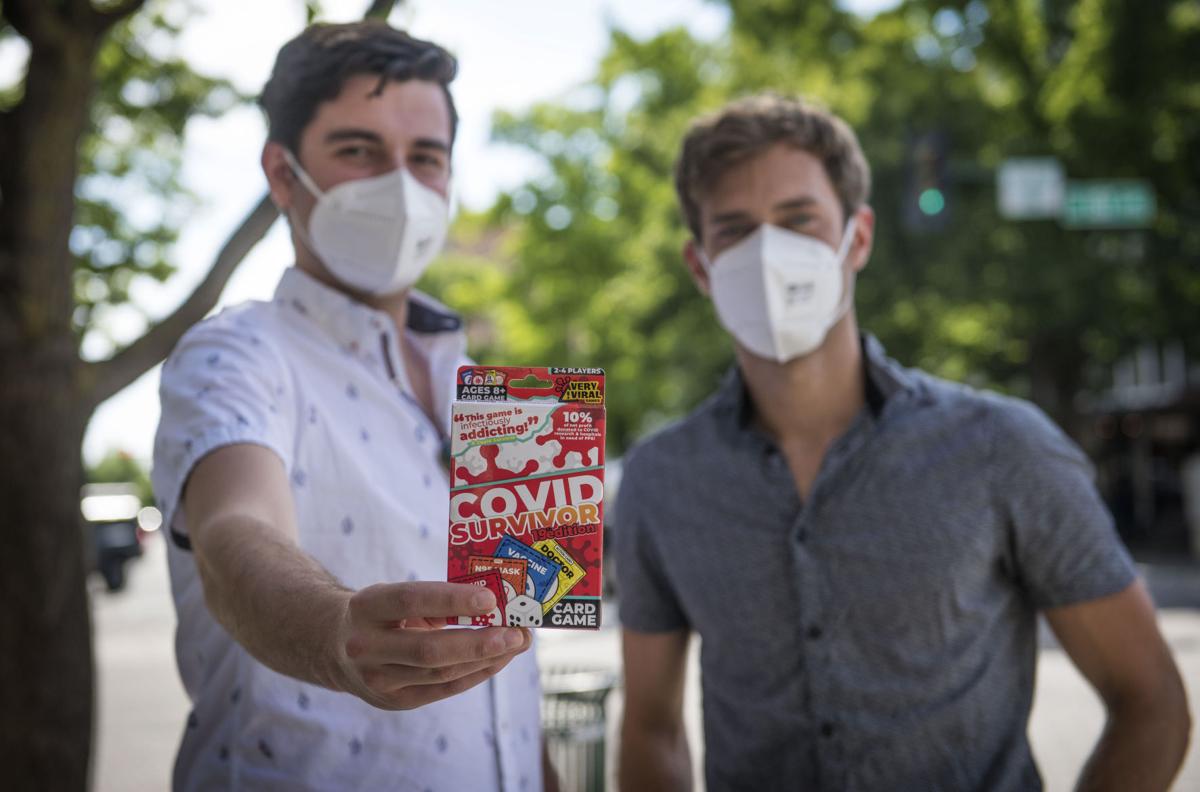 Christian Miller (left) and Josh Boram, the makers of Covid Survivor, stand with their creation outside Book & Game Co. in Walla Walla where the game can be found. 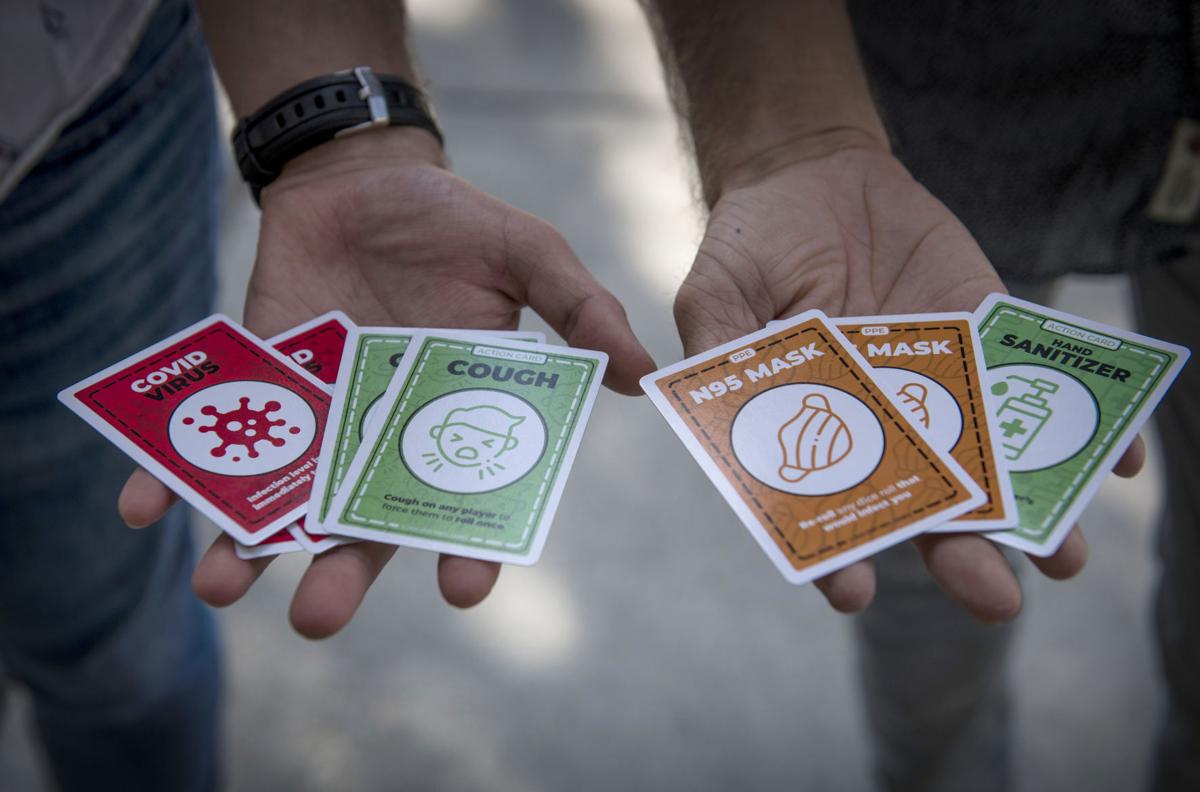 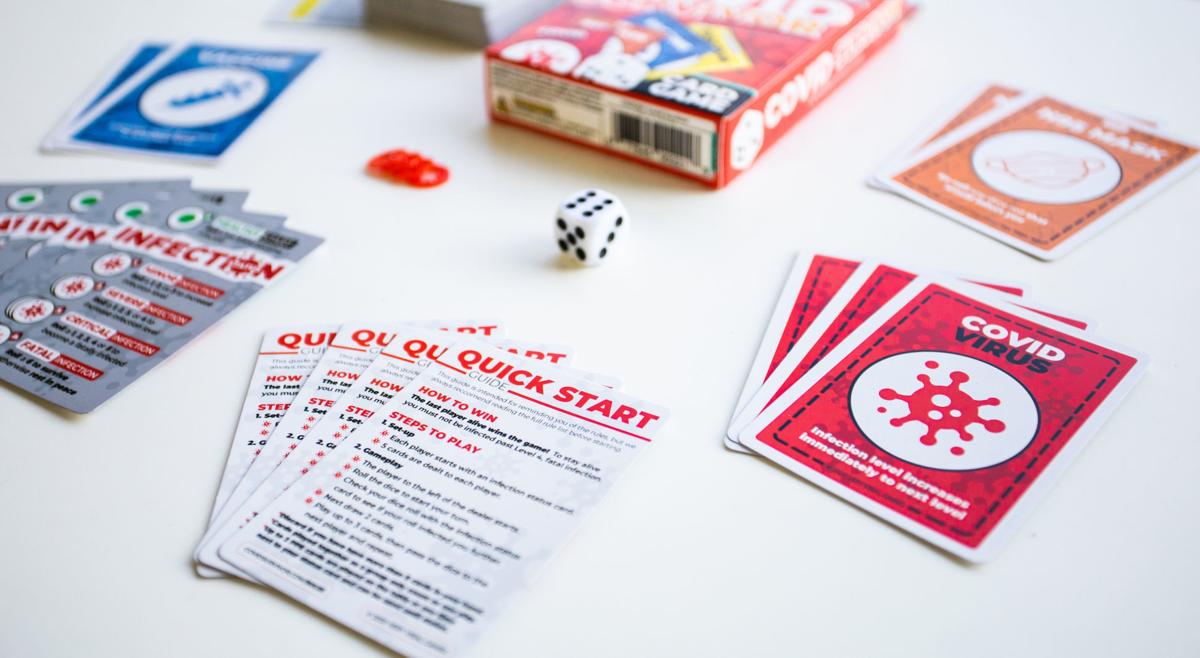 Items from the Covid Survivor game laid out. 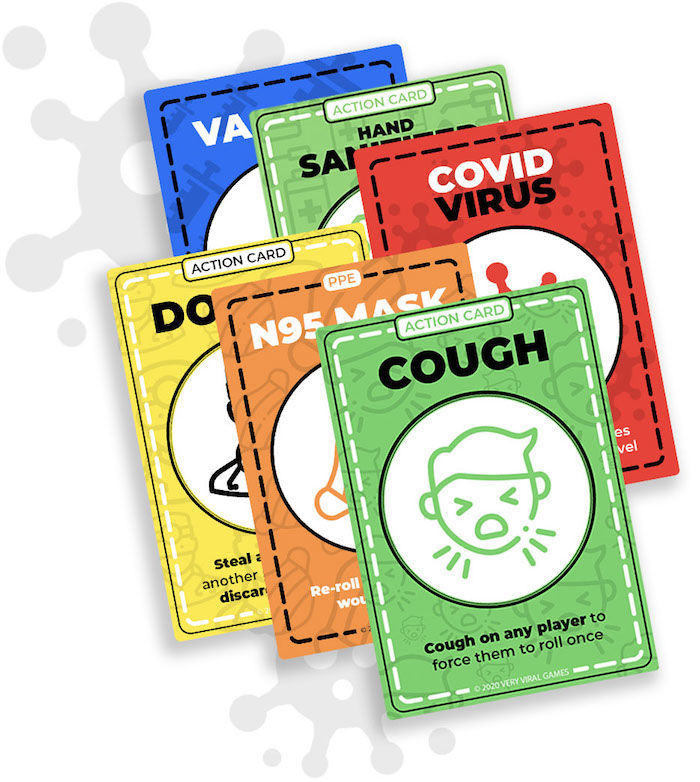 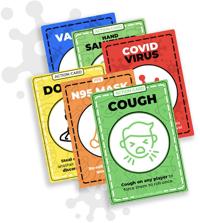 The cards featured in the Covid Survivor game. 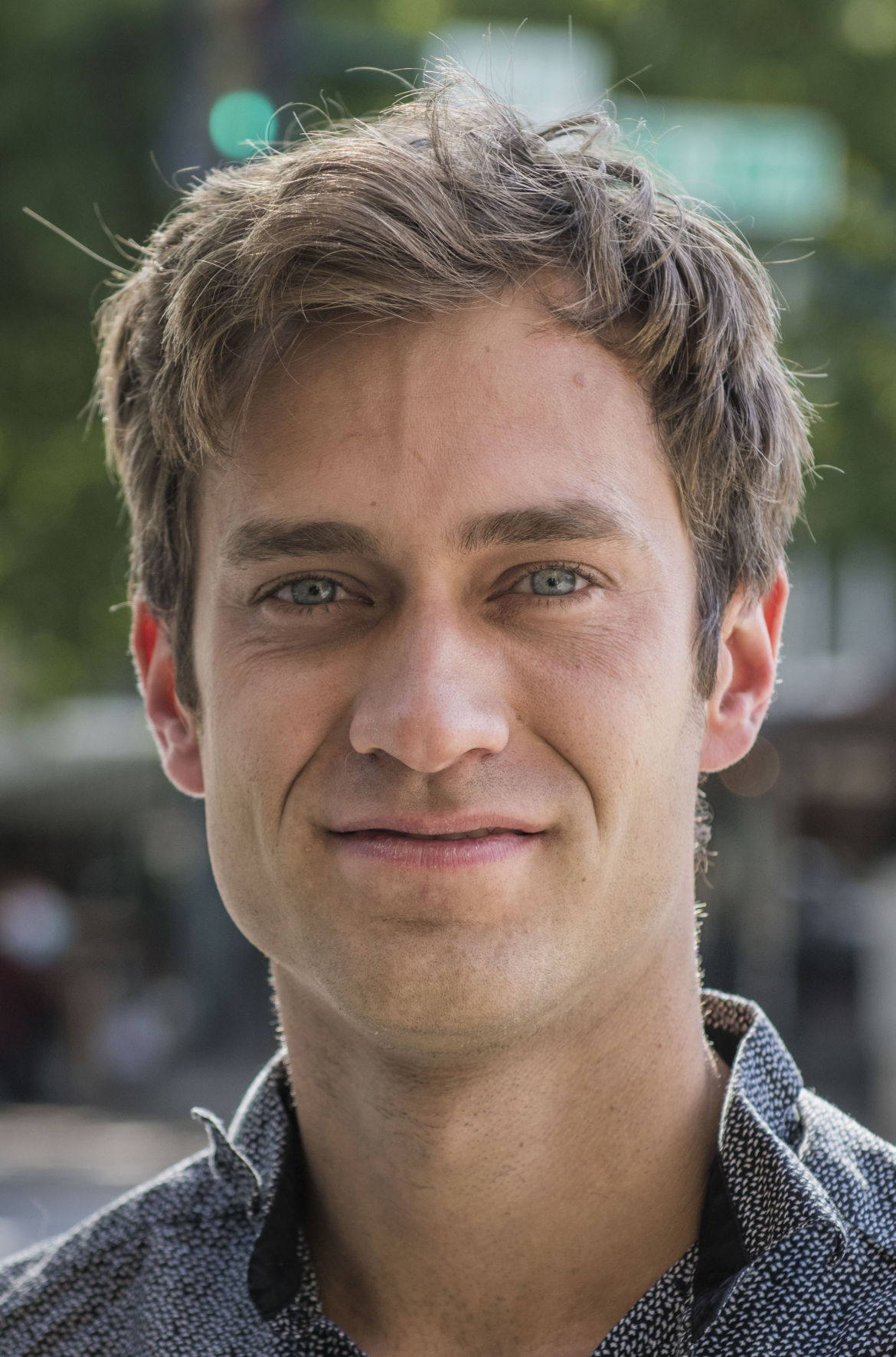 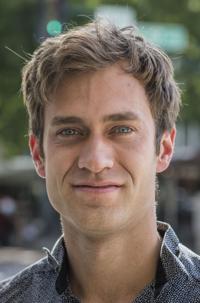 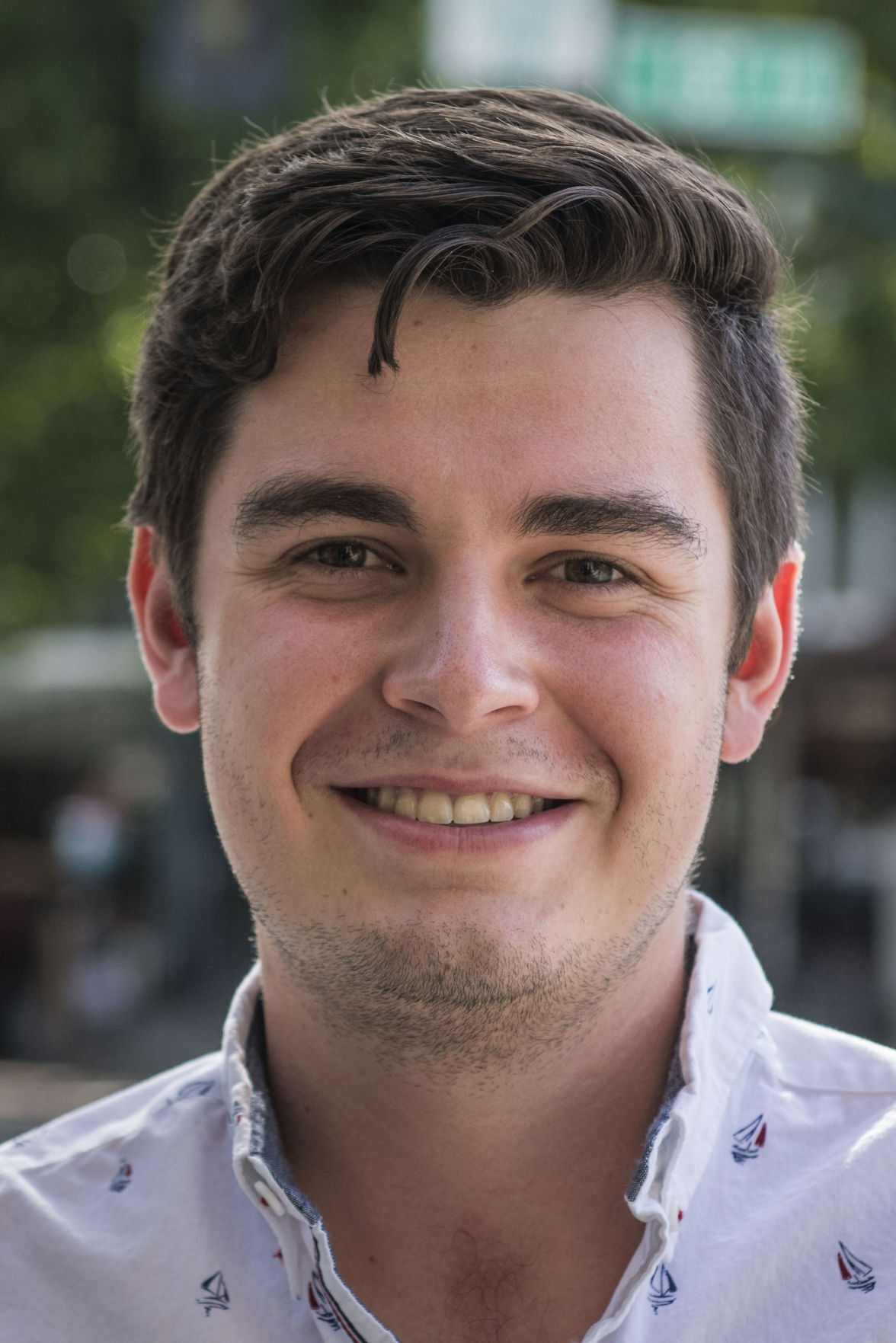 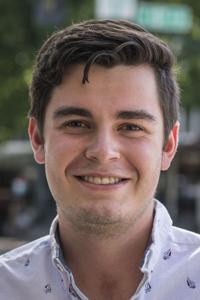 Christian Miller (left) and Josh Boram, the makers of Covid Survivor, stand with their creation outside Book & Game Co. in Walla Walla where the game can be found.

Items from the Covid Survivor game laid out.

The cards featured in the Covid Survivor game.

It may be hard not to balk at the idea of creating a game based on a worldwide pandemic.

The co-founders of Very Viral Games in College Place were fully aware of the optics of creating Covid Survivor. The reactions, however, have been anything but adverse.

“I was expecting more negative feedback, but I got so much positive feedback,” the game’s co-founder Josh Boram, 29, of College Place said.

He and his friend and business partner Christian Miller, 20, of College Place said people have been finding the game to be exactly like its tagline promises — “infectiously addicting.”

“We literally just got three emails from Amazon that said, ‘at your current rate, you’re going to run out of stock in a couple days,’” Boram said.

Much like the coveted N-95 mask card in the game — and personal protective gear in real life — the two entrepreneurs are a little worried that maybe the game was more “infectious” than they realized.

The game was No. 1 on the best-selling new games list on Amazon for several days in a row.

The idea was incubated when Boram visited Portland in early March, before any pandemic-related travel restrictions had been put in place. He said he noticed the growing sense of fear in people as the pandemic became more and more potent.

“Although fear is natural in a situation like this, it can be toxic and hurtful,” Boram said. “I knew I could do something to help make an impact.”

His first thought was to make coronavirus-related T-shirts that could raise funds for charity. But he wanted to land on something that was more fun and engaging, he said.

Instead, he thought of building a game that could imbue a sense of calm while also teaching real-life techniques on how to combat COVID-19.

He came up with the name “Covid Survivor” and checked to see if covidsurvivor.com was a registered domain — it wasn’t.

“I couldn’t believe (it),” Boram said. He immediately registered it “knowing something awesome was about to happen.”

Boram is also the owner of Trust Lock, a web-based company that provides business verification for online retailers.

He’s experimented with a bevy of business ideas throughout the years, with Trust Lock being his main focus. But as sales naturally slowed down during the economic shutdown, he turned his attention to creating the game.

He mentioned the idea to his friend, Miller, a Walla Walla University student and avid fan of board and card games.

Miller immediately caught the business bug and began racking his brain how to make a game — something he had never done, despite being a huge fan of Settlers of Catan, Exploding Kittens and Monopoly Deal.

“About a week and a half later, I was trying to go to sleep, and I had just eaten way too much ice cream, so I wasn’t going to sleep,” Miller said.

Miller got some index cards, came up with some more actions and rules and asked some friends to test the game. After about a dozen or so rounds of experimenting, he tested a sample that was satisfactory.

The game left the testing and entered production. Boram used his graphic design skills to put everything together and design the cards.

The finished product works quickly with games lasting about 10-30 minutes with two to four players.

Boram pointed out how the game reflects real life — they added more virus cards to make the infection rate higher in the game, just like researchers found coronavirus is more contagious than originally thought.

“We wanted to be able to include real-life scenarios that can even help people,” Miller said. “It’s not giving you medical advice, but games have a way of having subliminal messaging throughout them.”

A doctor card can be played to steal an N-95 mask card. The mask card has a chance to block a virus card, but not totally. The cough card can be blocked by the hand sanitizer card. All of the ideas are at least loosely based on what is known about the virus.

Not to leave the game without levity, they added the toilet paper roll card which can allow a player to re-roll the die.

As stated firmly on the website, the game is intended to use a fun game to combat the fear surrounding the virus while educating people about proper protocols at the same time.

“Spread fun, not fear,” the site boldly claims on its front page.

Boram doesn’t need to be told twice about making the game lighthearted and humorous. He knows how serious the virus is. He suspects he had it.

Boram returned from his trip to Portland with a fever and chills. After combating the fever for three solid days he began to recover and continued to self-isolate.

About a month later, he found out that he may have been in close contact with someone who had tested positive for COVID-19.

“If we’re gonna make a game about COVID, we can teach good concepts through it and that’s all great,” Boram said. “But still, it’s a sensitive enough issue that we should give back some proceeds as well as do good through the game play.”

The game makers will donate 10% of all proceeds from sales to causes related to the pandemic. The first batch of donations will likely be masks for local health care providers, Boram said.

“As the thing grows, later on, it’s gonna be a significant amount of profit that we can donate,” Boram said.

The plan now is to keep up with the sudden demand and expand the game as necessary.

“We paid such a high price to get it so fast,” Boram said. Shipping alone cost nearly $200 per box of 50 units, he said.

They started small, despite the high cost, because they weren’t sure how it would sell and how people would respond.

Miller is already in the lab, so to speak, coming up with ideas for future expansion packs that will add more variety.

“Honestly, I’m really surprised,” Boram said. “That’s why we ordered a smaller amount. I (didn’t) even know how this was gonna be perceived.”

Instead, they had the opposite problem and they were nearly out of stock right after the game launched a little over two weeks ago.

Boram said every buyer he’s spoken to has bought the game. Some have been calling him back asking for more stock already. The two haven’t advertised one penny yet and it’s already moving faster than they can keep up with.

It truly does appear to be a contagious game.

Covid Survivor is currently available on Amazon, as well as several game retailers across the Northwest including limited supplies at Book & Game Co. in Walla Walla. The retail price is $14.95.

Pre-orders will be available on the game’s website if it sells out.