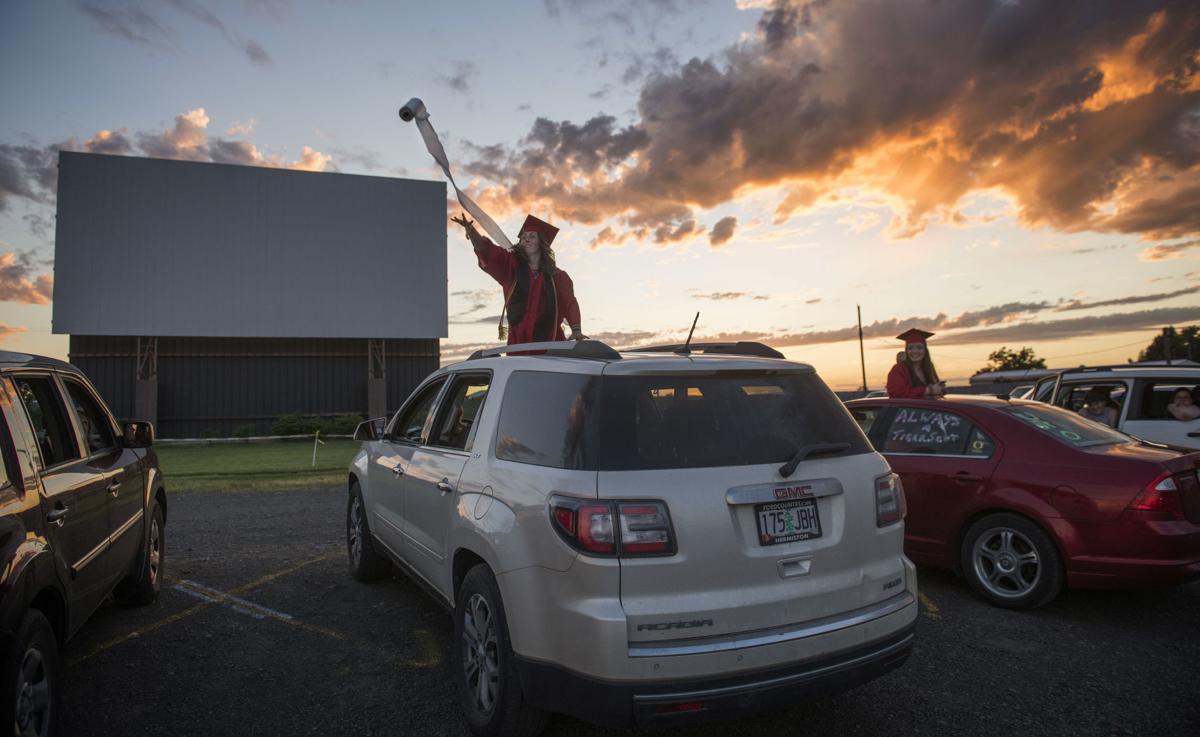 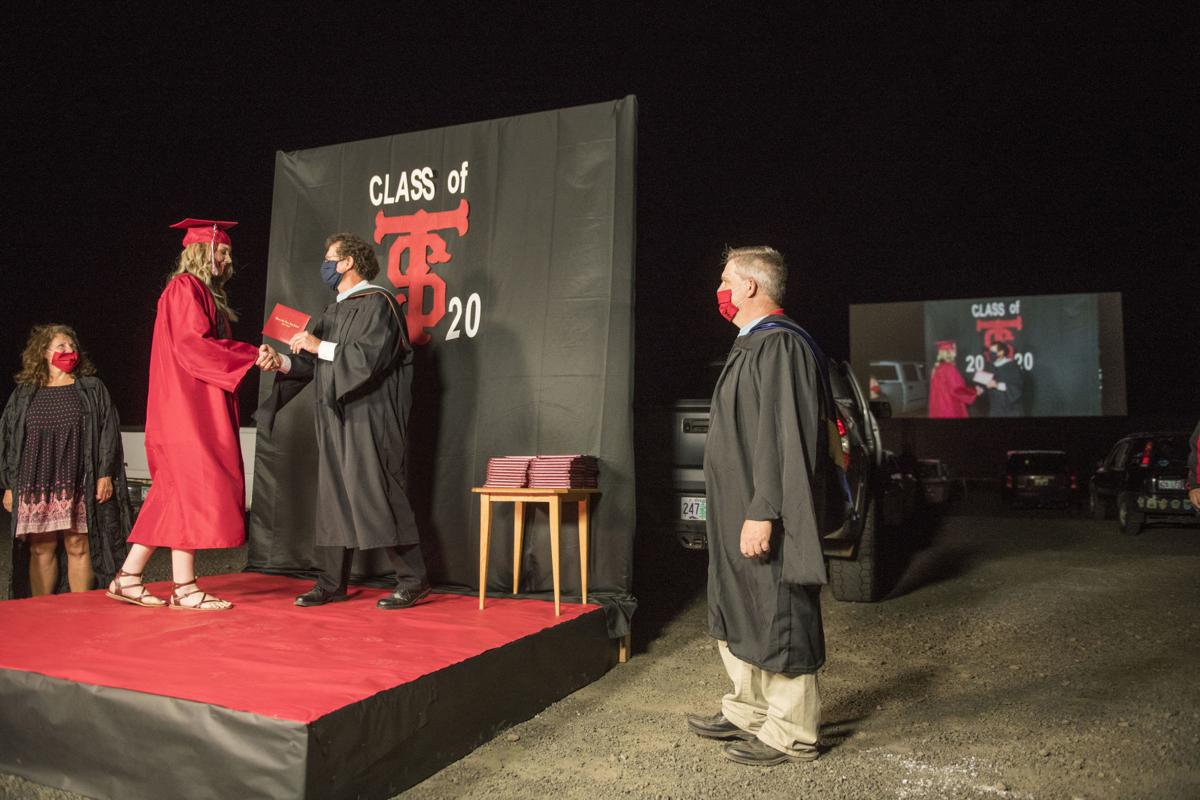 Weston-McEwen High School graduates receive their diplomas while being projected on to the big screen at the M-F Drive-In Theater. 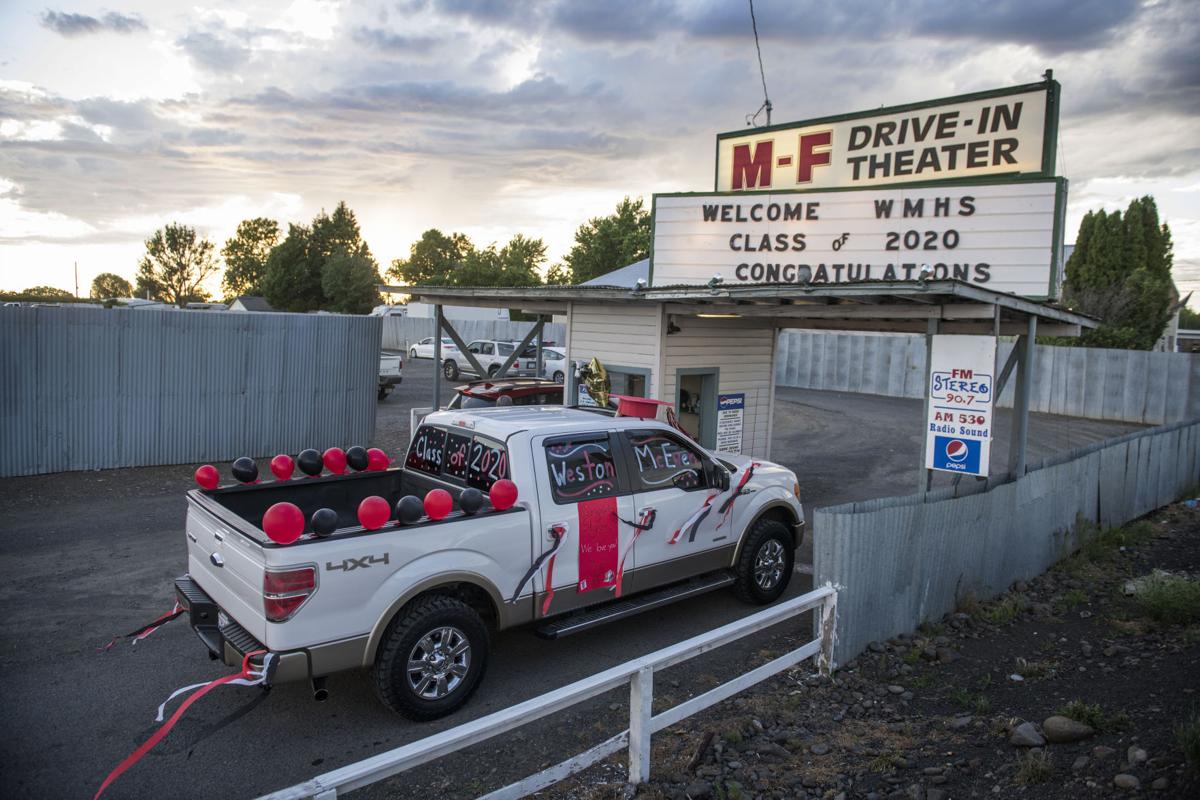 Cars enter the M-F Drive-In Theater in Milton-Freewater for a social-distancing graduation ceremony for Weston-McEwen High School on Thursday night. 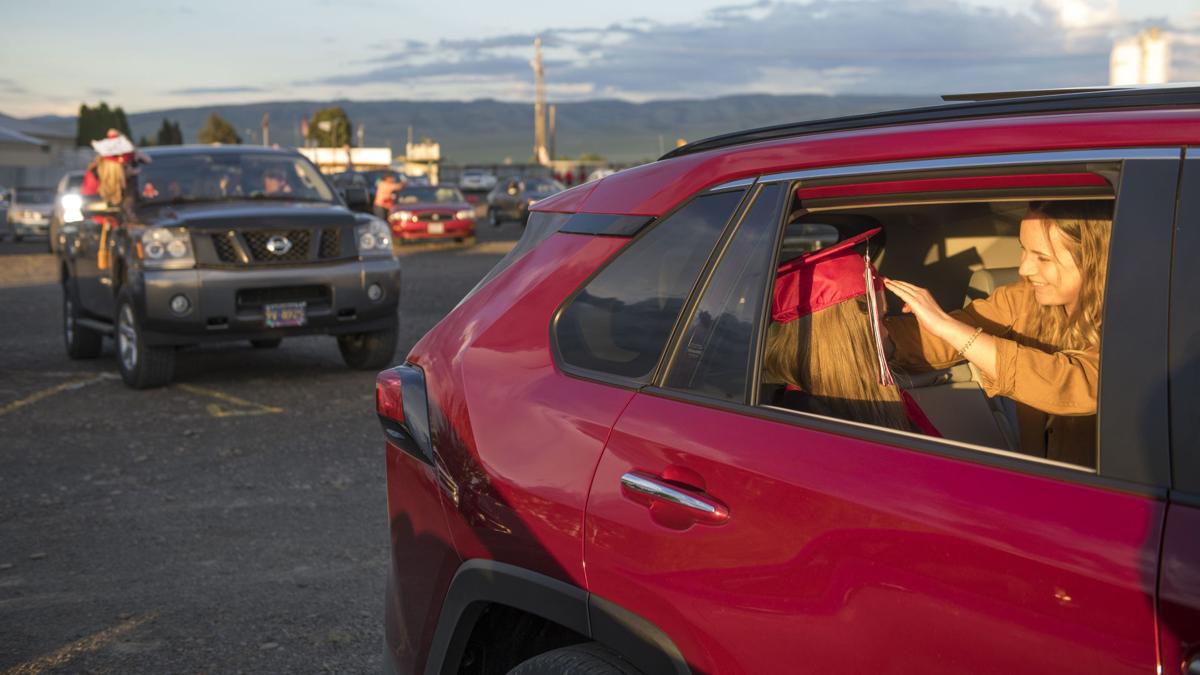 Senior Emma Schroeder gets some help with her cap from her sister Katie at the M-F Drive-In Theater in Milton-Freewater for a social-distancing graduation ceremony for Weston-McEwen High School on Thursday night. 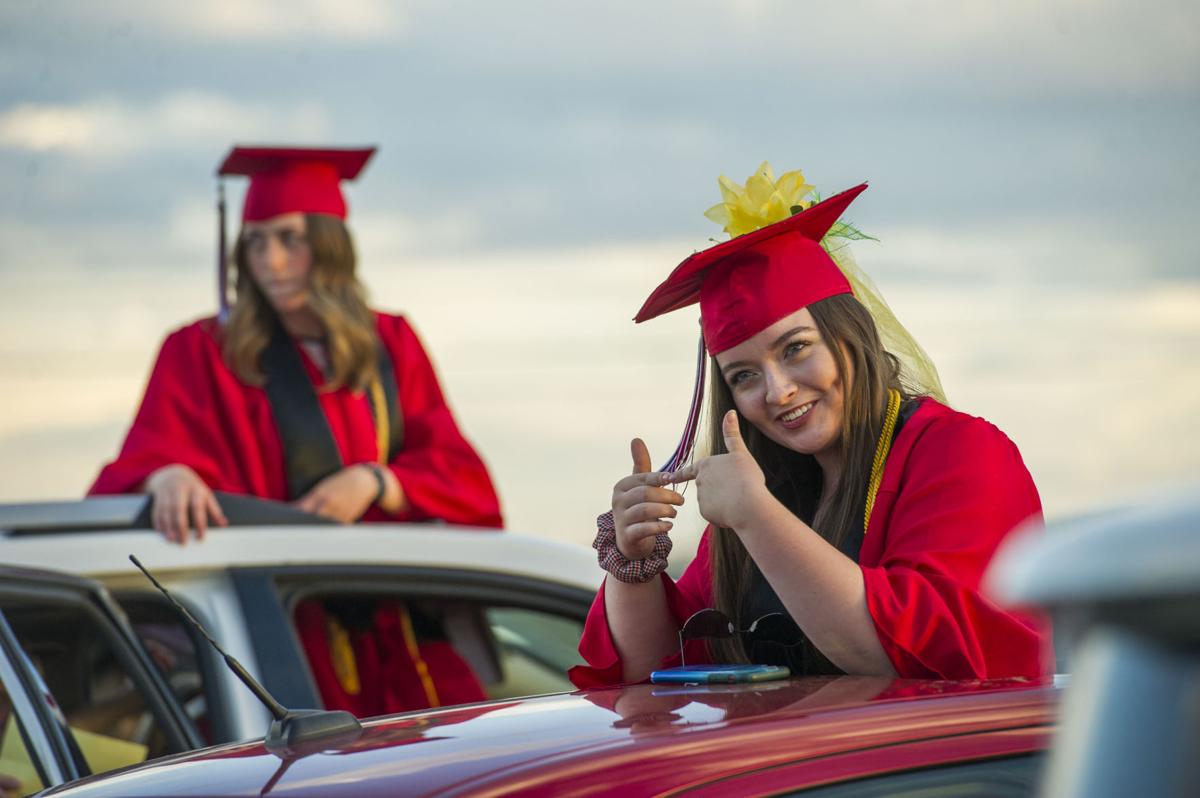 Senior Tenley Alderson, right, gestures to a classmate at the M-F Drive-In Theater while waiting for a socialistancing graduation ceremony for Weston-McEwen High School on Thursday night. 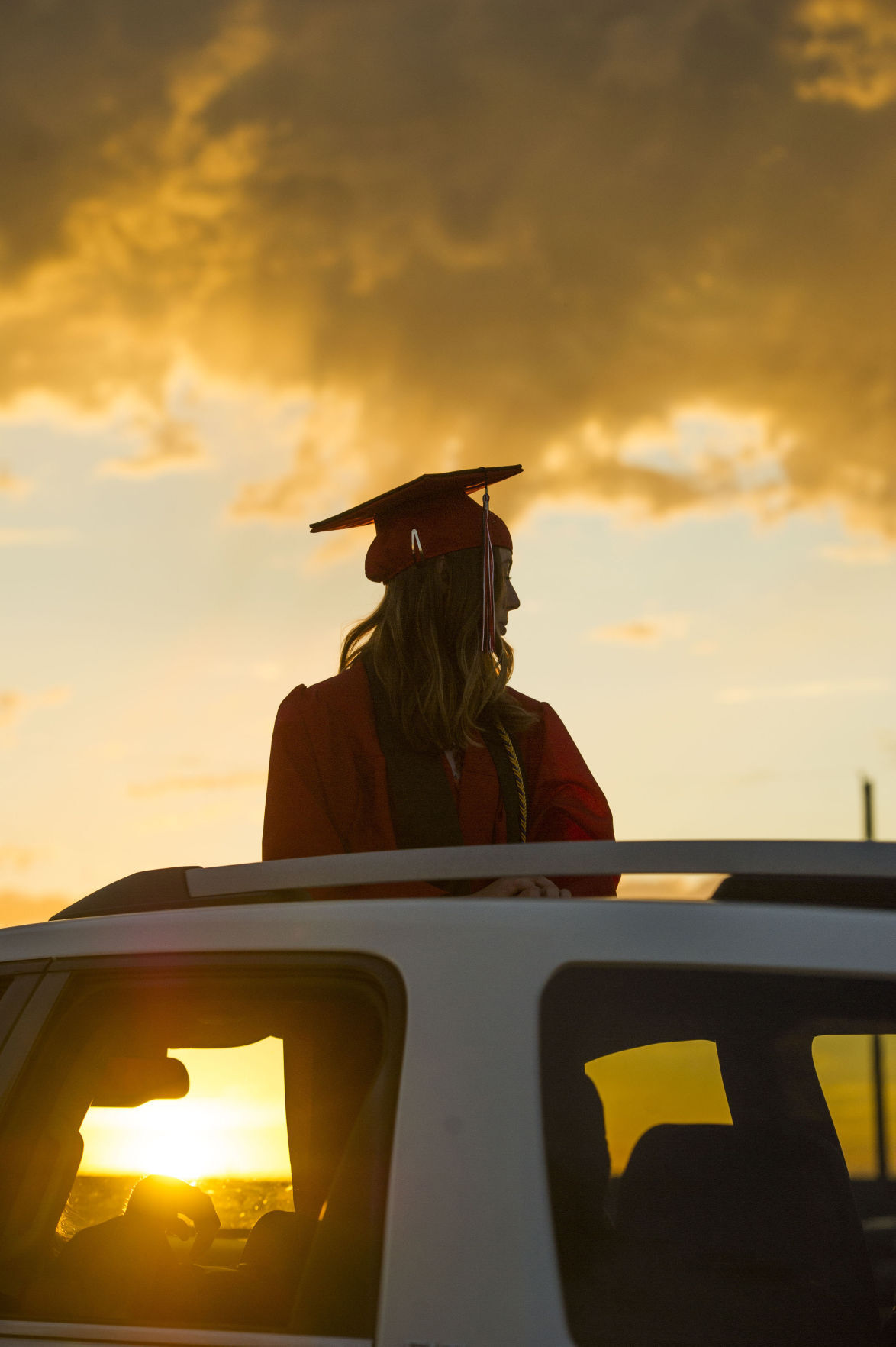 Senior Cloe Davis stands in her vehicle at the M-F Drive-In Theater while waiting for a graduation ceremony for Weston-McEwen High School on Thursday night. 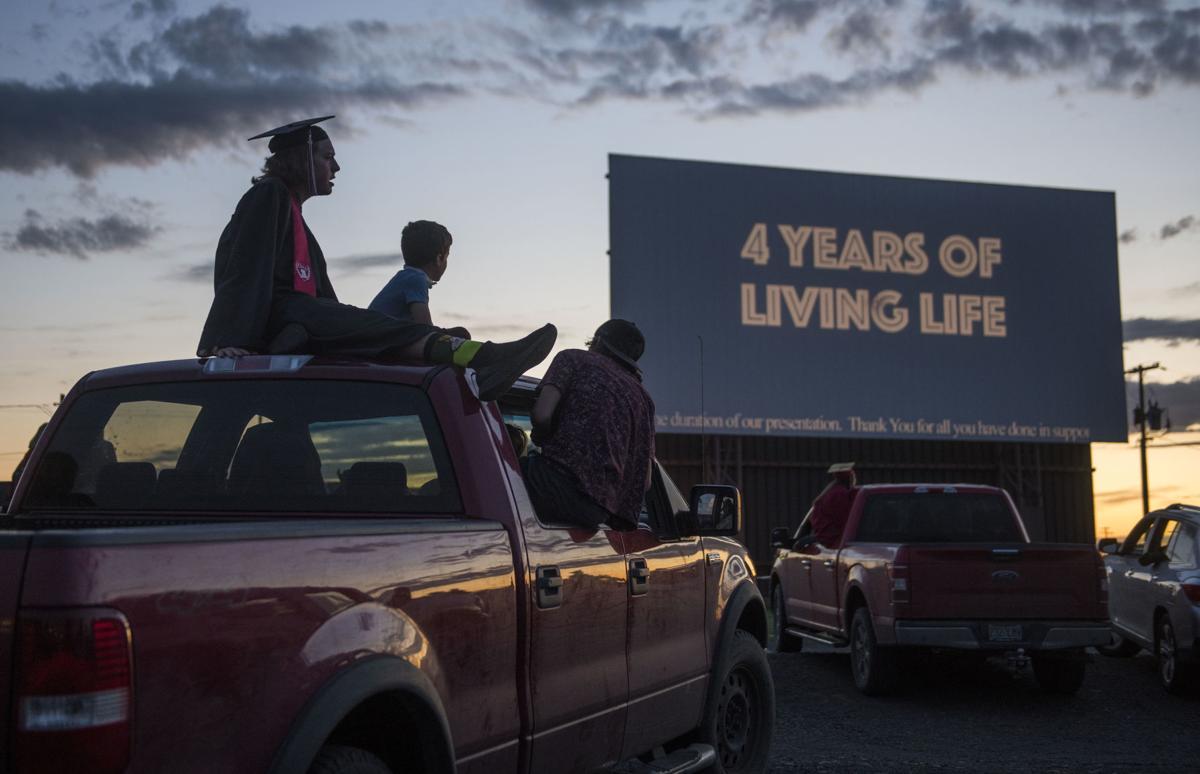 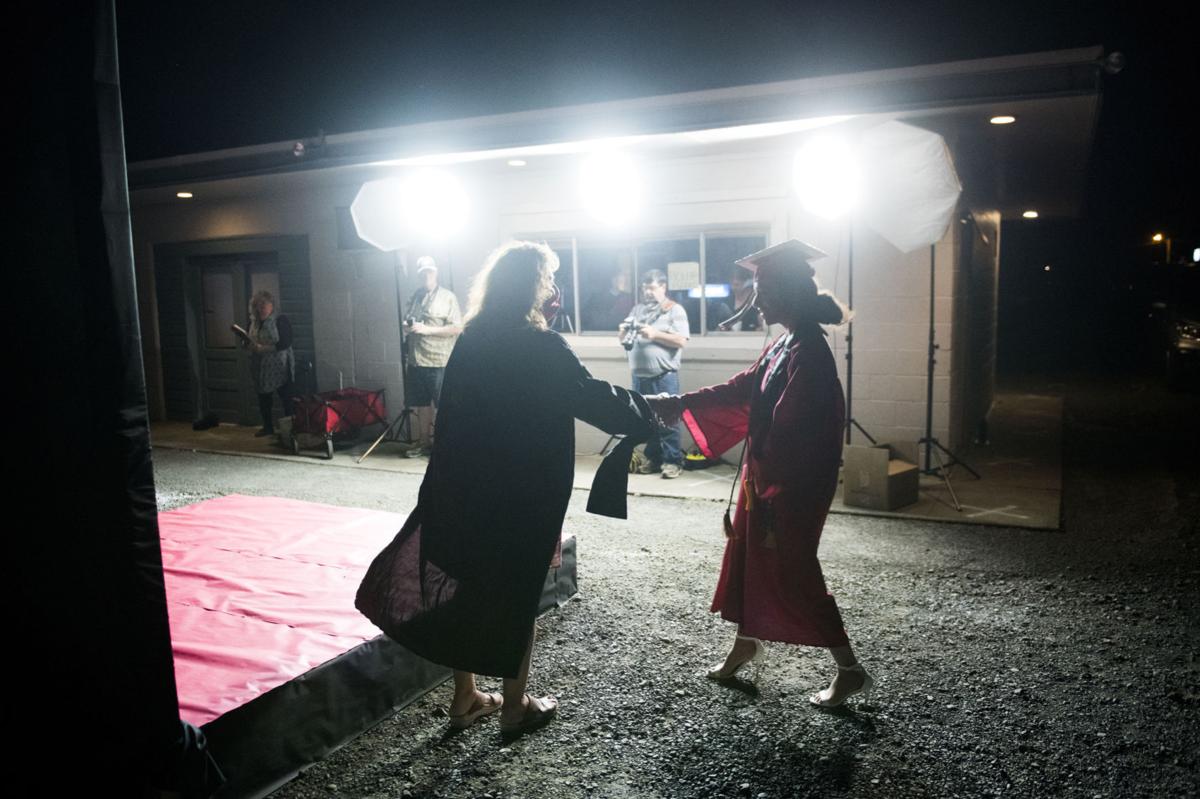 Graduates step to a makeshift podium to receive their diplomas during a social-distanced commencement ceremony at the M-F Drive-In Theater for Weston-McEwen High School seniors Thursday night.

Weston-McEwen High School graduates receive their diplomas while being projected on to the big screen at the M-F Drive-In Theater.

Cars enter the M-F Drive-In Theater in Milton-Freewater for a social-distancing graduation ceremony for Weston-McEwen High School on Thursday night.

Senior Emma Schroeder gets some help with her cap from her sister Katie at the M-F Drive-In Theater in Milton-Freewater for a social-distancing graduation ceremony for Weston-McEwen High School on Thursday night.

Senior Tenley Alderson, right, gestures to a classmate at the M-F Drive-In Theater while waiting for a socialistancing graduation ceremony for Weston-McEwen High School on Thursday night.

Senior Cloe Davis stands in her vehicle at the M-F Drive-In Theater while waiting for a graduation ceremony for Weston-McEwen High School on Thursday night.

Graduates step to a makeshift podium to receive their diplomas during a social-distanced commencement ceremony at the M-F Drive-In Theater for Weston-McEwen High School seniors Thursday night.

MILTON-FREEWATER — The first high school in the Walla Walla Valley to honor its seniors in this unparalleled graduation season did so with a bang.

Several bangs, in fact, through a display of fireworks that filled the Thursday night sky above the M-F Drive-In Theater with explosions of color and light.

The beginning of the evening was equally vibrant as 38 of Weston-McEwen High School’s class of 2020 began rolling into the outdoor theater well before the starting time of 8:30 p.m.

And for a graduation ceremony in a year of a tremendous number of “firsts,” there were plenty of traditions sprinkled throughout the night.

Athena-Weston School District Superintendent Laure Quaresma and her team began working toward this moment weeks ago when it became apparent Umatilla County would not be far enough along in Oregon’s pushback against the spread of COVID-19 to allow for the district’s typical ceremony in the Weston-McEwen gym.

It would have been a shame, however, to waste Thursday evening’s balmy weather and watercolor sky stuck inside a building filled with overly warm folks fanning themselves with a paper program.

The first two parking rows of the drive-in were designated for the graduating seniors in their cars and trucks, many festooned with balloons, streamers and congratulatory art painted on windows.

Each student had been issued tickets for five additional guest vehicles, which eventually filled the lot to the back fence.

At 8 p.m., Quaresma was weaving around cars, greeting students, waving at parents and wearing a smile that threatened to leave lipstick on her earlobes.

“It’s so neat we get to use this big screen,” she said in a rare moment of standing still.

“And we’re going to have fireworks at the end … parents raised the money to make that happen.”

Other staff, wearing face masks in the school colors of red and black and monogrammed with the TigerScots logo, also roamed the lot. They were charged with traffic control and making sure students stayed in their vehicles.

But the seniors found ways to interact nonetheless, from perching in their car windows to popping out of sunroofs to wave, hoot and holler.

Rolls of toilet paper flew like fluffy missiles from one rig to another, unfurling in flight.

And car horns punctuated the entire evening, the sound of teens expressing happiness and friendship for each other.

Cylie Lagao, 17, sat with family members in a flatbed pickup.

In her red gown, Cylie seemed to glow with anticipation. She was graduating high school with Oregon’s two-year transfer degree from Blue Mountain Community College, she said, and the plan is to major in cinematography and business at Willamette University.

Cylie credited a culture of creativity and independence at her school for fostering her dream, she said.

“Weston-McEwen lets you personalize your education and makes each student feel special. I wouldn’t have been here without that.”

A dozen cars away, Cade Bryan said the night was feeling good, even if this wasn’t how he expected to end his 13 years in the Athena-Weston school system.

“Not a lot of other schools get to do this, so I’m grateful,” he said.

Already in possession of his pilot’s license, Cade, 18, is headed to Walla Walla University’s aviation program and the Air National Guard.

He’s missed his classmates and teachers with the closure of school buildings this spring, Cade said.

But being together again — first at Wednesday’s parade of seniors driving through Athena and Weston – and again on this night is a very happy moment, he said.

Student success coordinator Kathy Baumann was also happy as she kept an eye out for anyone outside their car.

This graduation was turning out to be more than students anticipated, Baumann said, a smile crinkling her eyes above a mask.

“I think in the very beginning they were kind of disappointed and weren’t going to do any more work. Once we got it through their heads that we had something planned, but they had to finish their work to be part of it, it kicked in for them.”

Baumann is the high school’s scholarship coordinator, and she was initially worried many seniors wouldn’t go ahead and pursue getting money for college.

Without seeing kids in person, Baumann wondered how to use the prodding skills that have convinced countless Weston-McEwen students to fill out scholarship applications.

It turned out frequent phone calls were an adequate substitute, meaning $588,000 in scholarships went to the class of 2020, she said.

By 8:45 p.m., the sun finally ceded the sky to dusk and the school’s traditional senior video began, filled with pictures of class activities, senior pictures, speeches and messages.

Since students couldn’t do the “senior walk” into a gym packed with families, they did so on video ahead of time.

Here came Cade Bryan, landing a airplane. Others arrived on horseback — one young woman stood with her feet planted on two horses as she rode into view — a duo of buddies carried the American and school flags, two students “raced” toward the camera on the school’s track … the creativity was seemingly endless.

“We told them, ‘This is your walk, you can do it however you want,’” Weston-McEwen Principal Rob Shell said as he watched the production for perhaps the last of many times.

“The kids have been really good about helping us put this together. And people are doing really well with staying in their cars. I’m really happy about that,” Shell said, his gaze sweeping the lot.

As they watched babies in photos grow into youngsters and then graduating seniors in Weston-McEwen’s traditional video montage, this night’s audience frequently honked its appreciation.

And, just like at any high school graduation, there were air horn blasts and lots of cell phones recording the occasion.

While the final fireworks were the frosting on the evening, the cake came just before as every senior walked across a temporary stage to shake hands with Quaresma, school board chairman Preston Winn and Shell — all wearing face masks — and receiving a diploma.

Afterward, graduate Tenley Alderson conceded the night was more than she could have imagined.

With everything that’s happened surrounding the pandemic, her expectations for the ceremony were low, Tenley said.

“It wasn’t that I underestimated the staff or their ability to pull it off, it was just easier, after so much sad disappointment, to be realistic and grateful that it could happen at all.”

That the drive-in graduation turned out so well was wonderful, she said.

Most importantly, Tenley added, “I still felt as close and bonded with my class as I would’ve during a normal ceremony. I’m really grateful for everything that was done to make that possible.”

This morning, Quaresma continued to bubble with leftover delight.

She and Shell are already discussing using the drive-in for future graduations, she said.

“It was so unique, and we just really felt like if we could do this with people out in lawn chairs, with that better visibility for the video … that big screen and those fireworks just added this special element.”