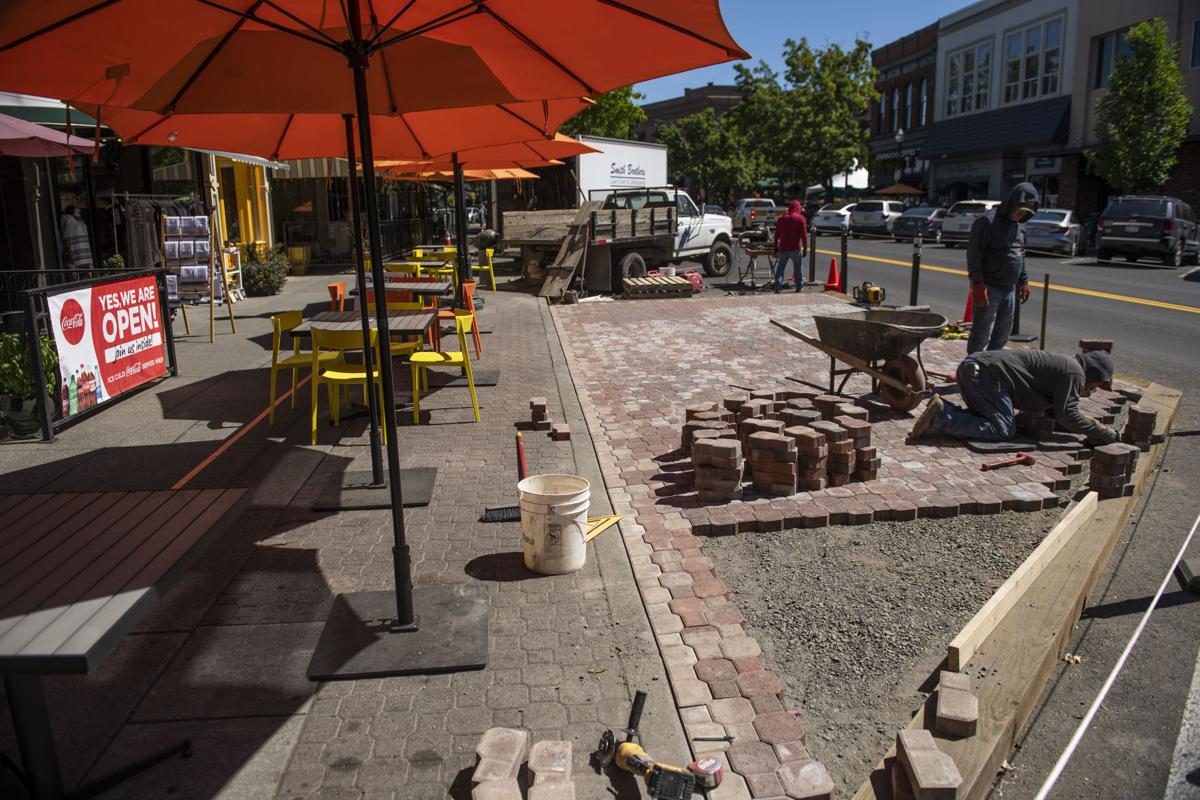 A Smith Brothers Lawn Care & Landscaping crew sets brick out front of the Walla Walla Pasta Factory on Friday. The business is one of the latest four to add a “parklet,” an extension of the dining room, outside. 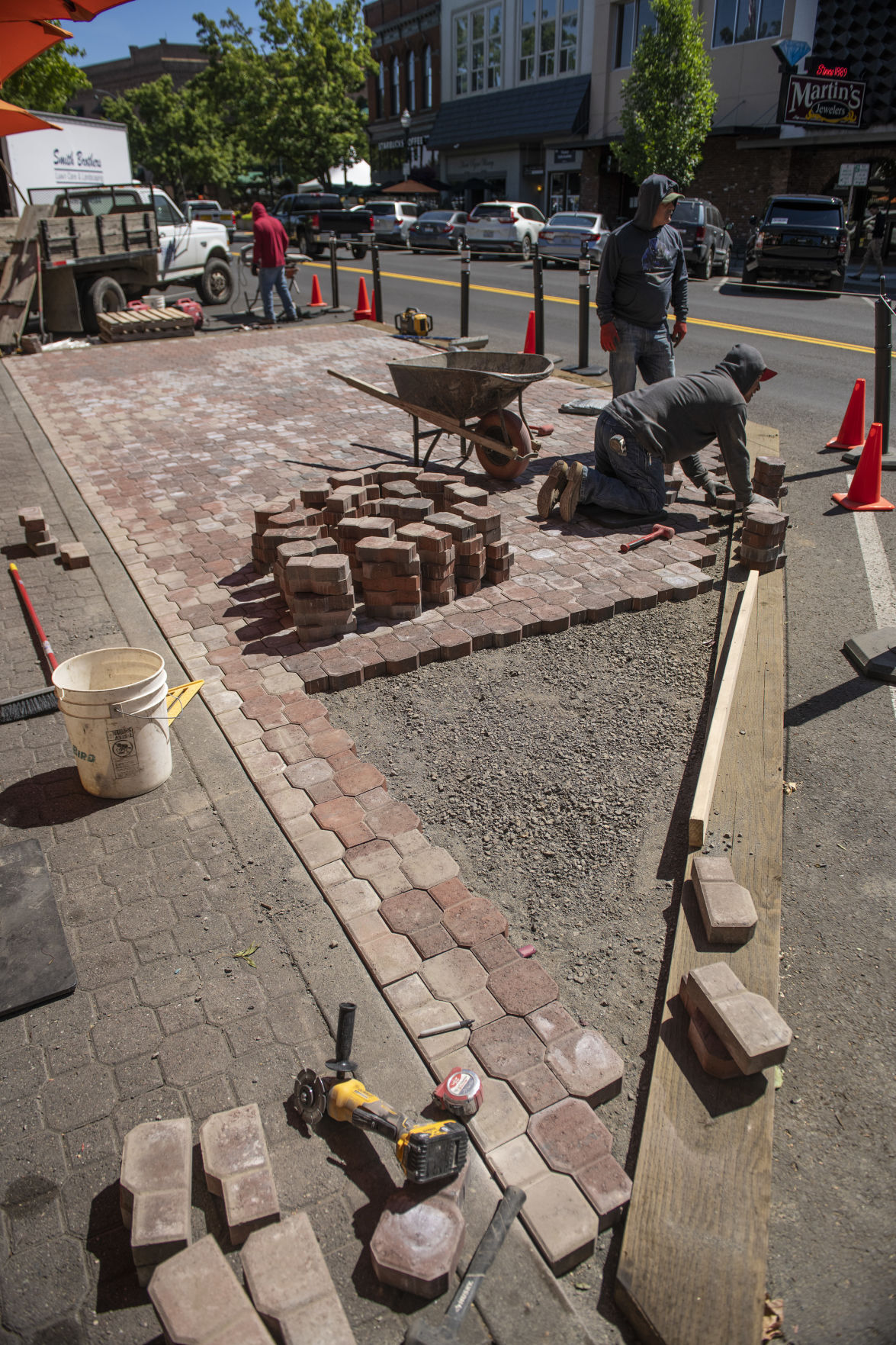 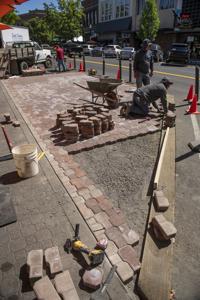 Employees from Smith Brothers Lawn Care & Landscaping replicate the pattern from the city sidwalk into the new parklet at Walla Walla Pasta Factory on Friday. The work took place as crews cordoned off areas along North Main Street for extended dining and drinking as a strategy to help businesses through indoor capacity restrictions.

A Smith Brothers Lawn Care & Landscaping crew sets brick out front of the Walla Walla Pasta Factory on Friday. The business is one of the latest four to add a “parklet,” an extension of the dining room, outside.

Employees from Smith Brothers Lawn Care & Landscaping replicate the pattern from the city sidwalk into the new parklet at Walla Walla Pasta Factory on Friday. The work took place as crews cordoned off areas along North Main Street for extended dining and drinking as a strategy to help businesses through indoor capacity restrictions.

This story has been updated since its original publication to reflect a correction.

A pilot project by the city of Walla Walla that extended four downtown restaurants outside through constructed “parklets” has been so well-received that the community will now get a second helping of them.

Another four restaurants will receive $15,000 each in Coronavirus Aid, Relief and Economic Security Act funds — this time from Walla Walla County — to help pay for the platforms that extend sidewalks into guest seating areas.

“It’s going to save our business,” said Ryan Konen, who with wife Corie owns the Walla Walla Pasta Factory.

Work outside the pasta eatery began late in the night Wednesday when traffic was slow. Crews put down sand that ultimately was overlaid with pavers, matching the city’s sidewalks in framing that looks as if it had been there all along.

The work continued Friday as separate crews on behalf of the city also embarked on a new strategy, converting angled parking spaces along stretches of North Main Street into cordoned off service areas for eateries and tasting rooms.

About 100 planters full of flora and fauna were set up to separate vehicular traffic from the spaces where meals and drinks are served.

Deputy City Manager Elizabeth Chamberlain said the city has tried to move as swiftly as possible on permitting. It also hasn’t charged permit fees on the parklets, which were initially approved for TMACS, Bacon & Eggs, Public House 124 and Brasserie Four.

The city has also provided tables, chairs and umbrellas to help furnish the efforts.

Businesses have been able to make the concept their own. Although three of the four initial parklets incorporated a decking system, Public House 124 extended outward toward Heritage Square Park with a raised concrete patio.

Though pitched as a trial concept, the decking platforms use a pinpoint attachment in the right of way that makes a fairly big effort of their removal.

“I would expect them to be there for a good while,” Chamberlain said of the existing and future parklets.

With the success of the first cluster, the city approached Walla Walla County commissioners to see if they’d consider funding another four parklets. One requirement under the county is that all of the parklets meet Americans with Disabilities Act requirements.

In addition to Walla Walla Pasta Factory, parklets are coming for Wingman Birdz & Brewz and Maple Counter Cafe. The fourth restaurant is being finalized.

He said the majority of the county’s $3.4 million in federal aid has been dedicated to operating the Department of Community Health, as well as funding elections — two expenses the city doesn’t have to cover.

About $2.8 million has been spent to date, Kimball said.

While many restaurants in the county have parking and space to expand their own dining rooms, downtown holds a different challenge for businesses, he said.

“You get outside to the county and a lot of these restaurants have more parking and space,” he said. “With COVID-19 rules, it’s all about square-footage.”

That’s been the case for Maple Counter, co-owner Rachel Nagler said. Even with an outdoor patio opened in 2017 on the side of the Alder Street business, the 6-foot distancing requirements took the table count from 11 to five, she said.

“Not only does fewer tables equate to less customers served and less revenue, it also means we need less staff,” Nagler lamented.

This year they postponed opening the business’s Waffle Truck to use the space for additional tables.

The parklet, expected to open as early as next weekend, will bring the table number up closer to the count at Maple Counter before the pandemic.

“We are excited to have another option for our customers and a way to bring in a bit (of) extra needed revenue before the weather turns cold again and we are back to only offering indoor dining,” Nagler said. “We are worried about what the fall and winter will bring and are grateful for the opportunity to give both the business and our staff the boost to help us get through the winter with the many upcoming unknowns.”

Over a block and west on Main, Walla Walla Pasta Factory expects to be seating guests by Thursday or Friday.

The parklet will be vastly different than the others, Konen said. He envisions a version of “Little Italy,” with ecology blocks serving as the anchors to hold sail shades the provide cover.

The space, he said, is large enough to provide room for about 25 additional guests.

Konen plans a grand opening Aug. 22 in partnership with other businesses in the neighborhood and try to help them, too.

A quote in this story initially included an incorrect word in a quote from Rachel Nagler on parklets adding another option for customers.