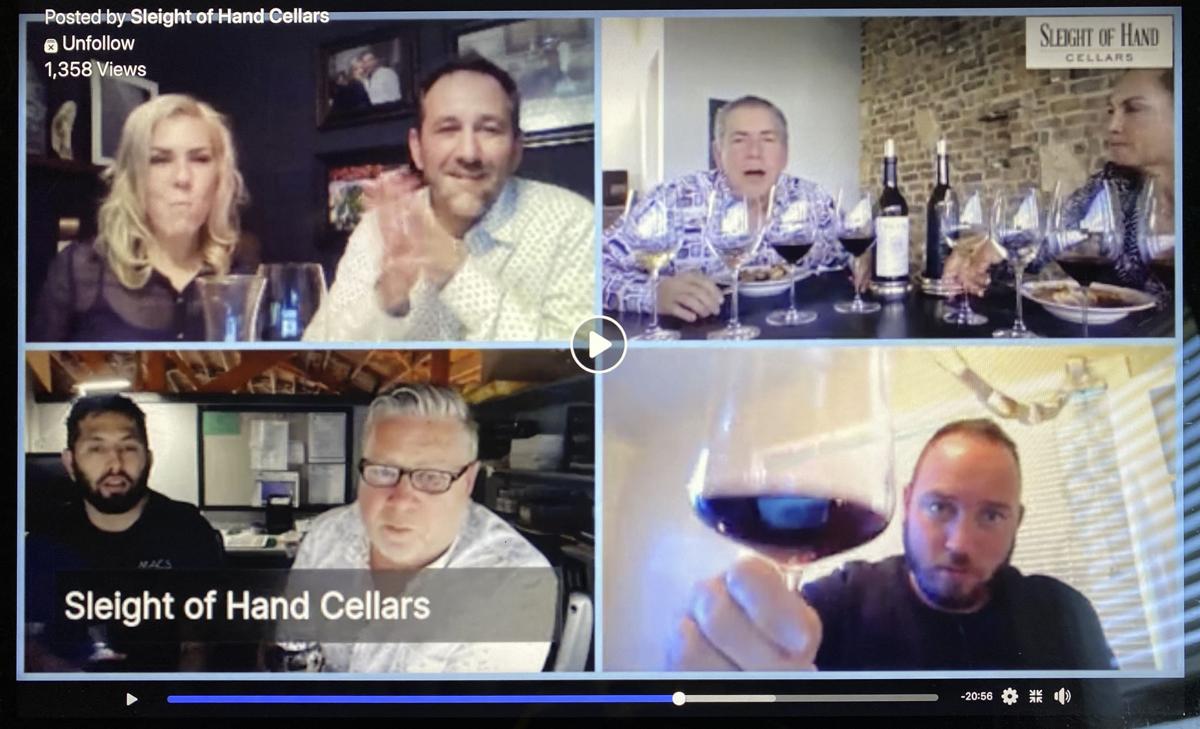 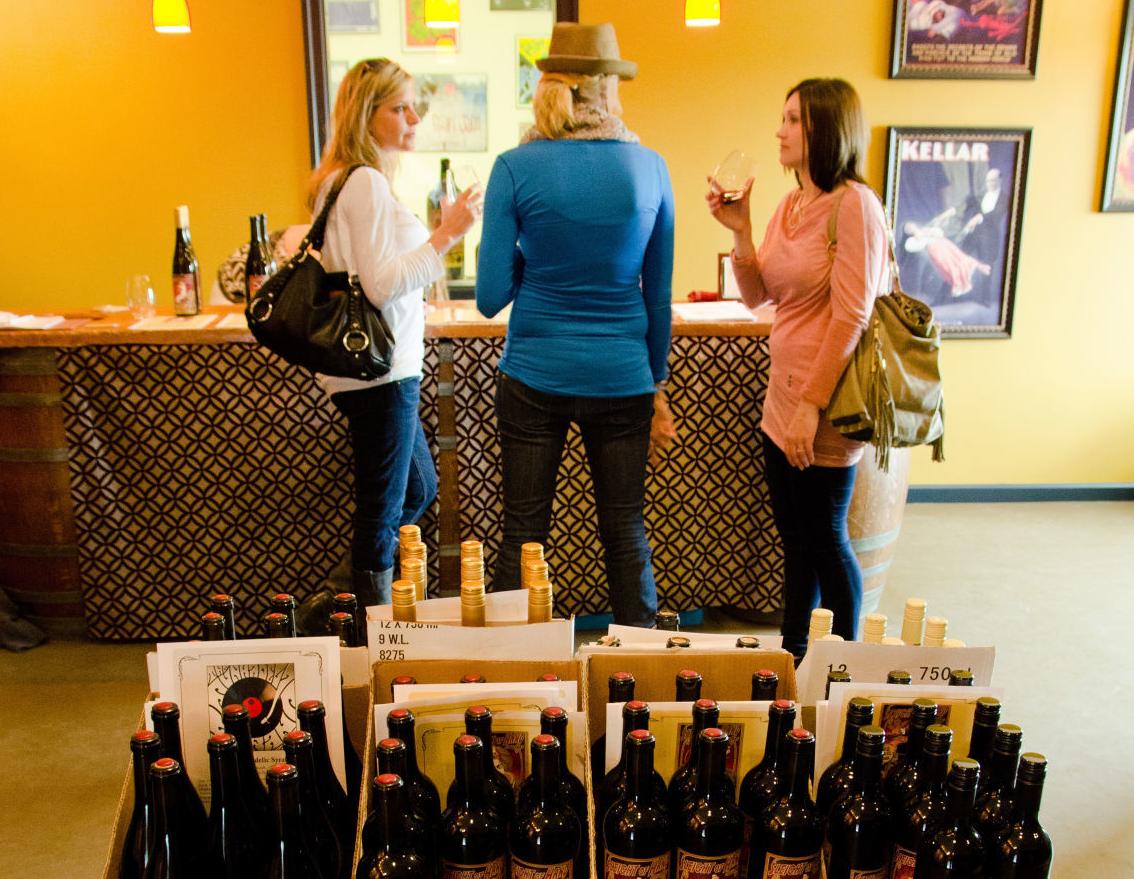 The Sleight of Hand Cellars tasting room, normally host to guests this time of year, is unable to serve with pandemic restrictions. Owners are tapping creative ideas, such as livestreaming, to connect with consumers. 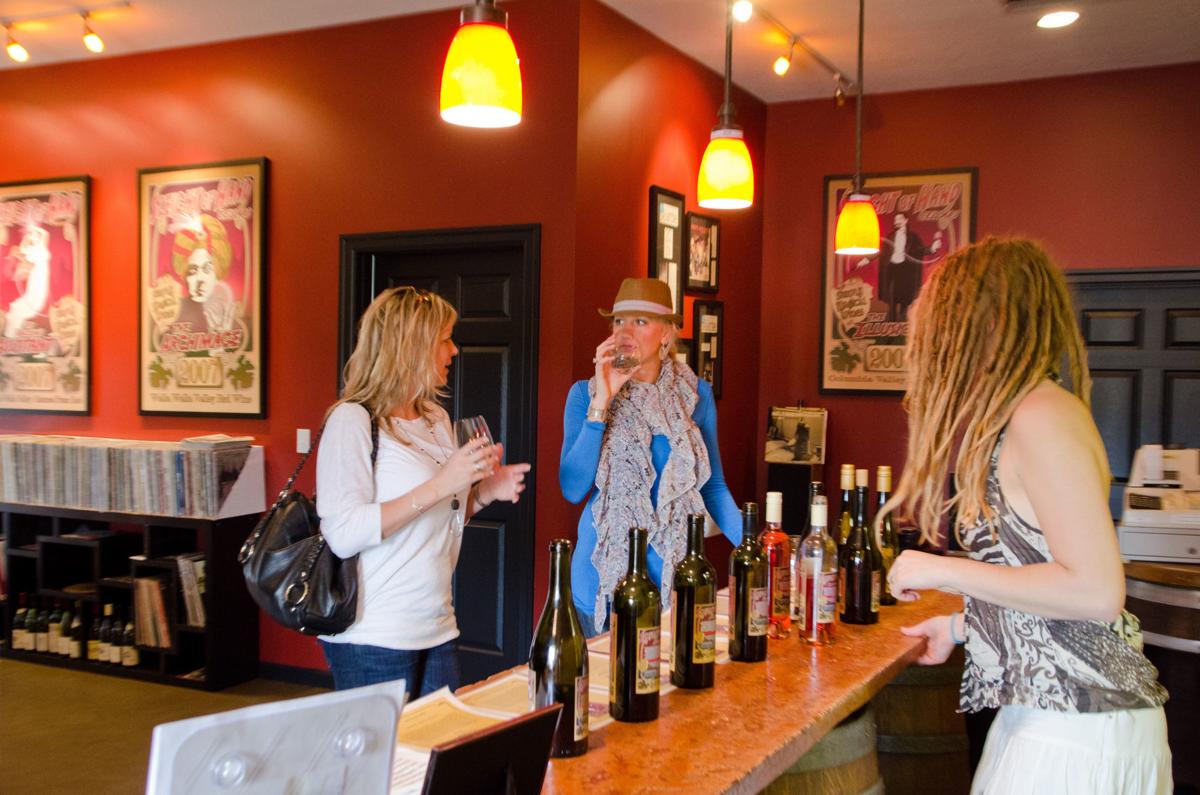 Sleight of Hand Cellars is tapping creative ideas on social media channels to connect with consumers while the pandemic restricts guests at its southside tasting room.

The Sleight of Hand Cellars tasting room, normally host to guests this time of year, is unable to serve with pandemic restrictions. Owners are tapping creative ideas, such as livestreaming, to connect with consumers.

Sleight of Hand Cellars is tapping creative ideas on social media channels to connect with consumers while the pandemic restricts guests at its southside tasting room.

The tasting room at Sleight of Hand Cellars may not be able to host guests with pandemic restrictions in place, but that isn’t stopping its operators from sharing a meal with them.

In a first for the southside winery Wednesday night, a new twist on the longstanding tradition of winemaker dinners took the tastings into the virtual realm.

Livestreamed on social media from their respective homes, Sleight of Hand’s co-owners and winemakers tasted through an array of wines served with a dinner prepared by TMACS, whose founder Tom Maccarone also joined in on the split screen to dine live on Facebook with guests.

Meals were prepared in advance for the 50 people who bought out the $35-per-person dishes within 24 hours of last week’s announcement of the event — a feat ever tougher with supply-and-demand challenges in food service.

But those who missed the chance to order could also make the meal from chef Jose Meza as recipes were posted for the spinach salad with orange poppy seed dressing and braised short ribs served over creamy polenta.

Beyond the novelty of a digital connection to interact while isolated, the idea is what wine industry officials see as the out-of-the-box thinking needed through a pandemic that limits visitor traffic, a key to the survival of those in food, wine and hospitality.

Response to the concept was so strong that Sleight of Hand plans to replicate it with other fine Walla Walla restaurants — Brasserie Four on Saturday and Hattaway’s on Alder next Wednesday — and with dates on the calendar for restaurants that serve its wines in Bothell, Washington, and Memphis.

As Wednesday’s salad course paired with two options — The Enchantress Chardonnay and The Magician’s Assistant Rose’ of Cabernet Franc — Sleight of Hand co-owner Jerry Solomon considered which one he preferred.

The discussion touched on the The Magician’s Assistant label, which features his wife and winery co-owner, Sandy Solomon, and an explanation of why the wine is one of production winemaker Keith Johnson’s favorites to make each year.

“The vineyard’s so good, I don’t have to do anything with it,” Johnson quipped.

The conversation gave a peek into the winery, providing connection and, thus, a bond to consumers, along with the insight into the dishes.

Authentic and engaging interaction is crucial to survival as wineries lean on direct-to-consumer sales, said Walla Walla wine and hospitality veteran Erik McLaughlin, CEO of METIS, which provides management consulting and mergers and acquisitions advising in alcohol and hospitality.

For example, about half the wine made at Sleight of Hand, located off JB George Road, is sold direct-to-consumer through one of its three membership club options, the tasting room or its vast mailing list, tapped more during the pandemic closure through creative offers of library wines, verticals and virtual tastings.

“That’s allowing us to stay in touch,” Busch said.

But with restaurants that serve its wine being closed, that side of the business is missing now.

McLaughlin predicted in a recent blog that recovery will be slow and painful and mortality across hospitality substantial.

Many of the newly unemployed, he wrote, come from the service sector of lower income jobs that are essential to the luxury operations that draw consumers likely least affected by the closures.

Wineries already best at chain retail and selling remotely “are taking the lion’s share of the spoils” as the shift to direct sales takes place made.

“I’ve spoken with more than one winery who shipped more wine (direct to consumer) in March than any month in their history. I’ve also spoken to several whose revenues are off by over 50%,” he wrote.

“This disruption is causing massively divergent results for individual businesses. The great thinning (that has been predicted for years but never seems to materialize) is beginning.”

Those not already positioned to connect with directly with their customers right now or already well established with a fan base of supporters are likely in the most trouble.

“If a brand had product that was good enough to float with the tide of their category, they are sinking right now,” McLaughlin wrote.

“Consumers are rationalizing what they spend on. Whether that be through stocking up from their favorite wine clubs or stocking up on their favorite brands available at Costco, only the favorites are getting the lift while everything else is being left behind. If you’re not already a favorite, it’s too late to become one. If you are already a favorite, well you better know how to capitalize on it now.”

Partnership with restaurants is a welcome support, especially as fine dining is pounded by pandemic restrictions.

At TMACS, Maccarone said he was approved for $250,000 in funding from the Small Business Administrations Paycheck Protection Program. But the hitch is big: He would have to bring back his entire staff, essentially using the funds to pay them, a transition off unemployment, while only offering curbside service. Furthermore, he could only use 25% for utilities, rent and insurance.

The offer doesn’t pencil out. As one of the only programs available, there’s essentially no relief for restaurants, Maccarone said.

Even under the four-phase plan to reopen Washington’s economy, restaurants are disadvantaged.

Restaurants can’t begin opening until the second phase and at less than 50% of capacity with parties no greater than five when that does happen. Now in the first phase of the reopening plan, the next phase won’t begin for a minimum of three weeks.

Even when businesses can fully reopen he believes customers may be slow to return with concerns about the virus.

Servicing curbside pickups has been one option for continuing to reach customers, but it comes with adjustments many may not realize.

To start, Maccarone and chef Meza had to develop a different menu for the model that includes dishes that can be loaded into containers and still represent the quality for which the restaurant is known.

And containers are a separate challenge in the first place. With a spike in demand from restaurants not accustomed to serving food to-go, access to bags and boxes is limited.

The same has held for ingredients. Prices are up on some of the basic meats as restaurants reposition. Maccarone said he had to take off salami as an ingredient in one of his sandwiches because it became too expensive.

Hence creating a menu for the virtual winemaker dinner was more challenging than he imagined. The original vision for a pork osso buco became impossible to execute because the restaurant couldn’t get a pork shank.

“We said to ourselves, ‘What can we make that we can put in a foil container and people can take home?’” Maccarone said.

The choices were a success as comments from diners rolled in through the live feed, praising the dinner. At least one person who missed out on the restaurant’s package followed the recipes at home, delighted with the results.

An emotional Maccarone said the outpouring of support has shown him a depth in humanity as he, too, works for out-of-the-box solutions to keep his business going as it approaches its 15-year anniversary in November.

“Every single person who ordered tonight, I think I know,” an astonished Maccarone said.

Moving forward, he envisions curbside service to be part of the new business model.