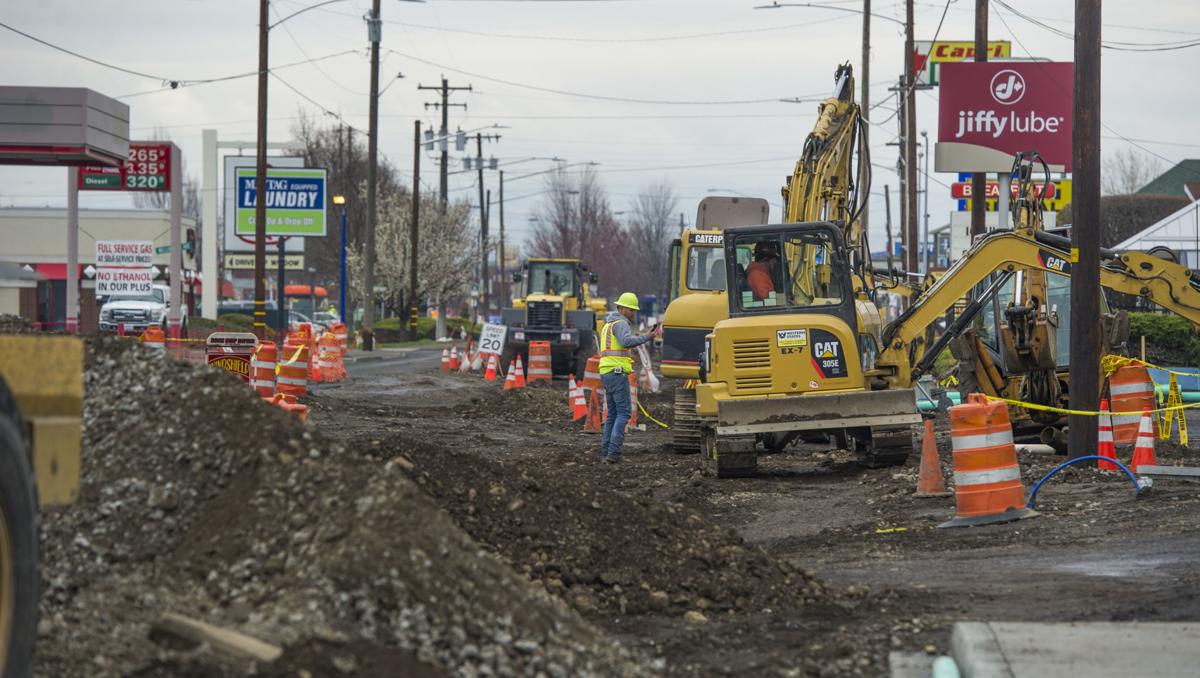 The newest phase of the Isaacs Avenue Infastructure Repair and Replacement Plan work has reduced traffic to a single eastbound lane.

Access to Eastgate businesses has remained open through the latest stage of construction. The access is vital, Walla Walla Transportation Engineer Monte Puymon said, as Isaacs serves as the only entry for a number of businesses.

The newest phase of the Isaacs Avenue Infastructure Repair and Replacement Plan work has reduced traffic to a single eastbound lane.

Access to Eastgate businesses has remained open through the latest stage of construction. The access is vital, Walla Walla Transportation Engineer Monte Puymon said, as Isaacs serves as the only entry for a number of businesses.

Opening a brand new business on the edge of a construction zone might have seemed risky to some.

But Chaundra Calhoon was encouraged people would easily reach her ZenSoul Yoga & Wellness Center at 1707 Isaacs Ave. from access off Roosevelt Street, despite the latest stage of the city’s Infrastructure Repair and Replacement Plan on the cross street at Isaacs.

As the conversion from a former Papa Murphy’s pizza place into a destination for mind, body and spirit took place, she made Roosevelt her primary entrance.

But her plans to open last Monday changed when fitness centers and gyms were ordered closed in a state strategy for social distancing to reduce the spread of the COVID-19 virus.

The one-two punch of construction and a cultural changes in the face of a pandemic has had mixed results for businesses so far, according to merchants and city staff.

“For me, this is just a matter of sitting on my investment a while,” Calhoon said. “I hadn’t opened yet.”

Next door, where her husband Ryan operates 24-hour gym Calhoon’s Fitness, the effect is more pronounced.

Some members wanted to know about refunds for the period when they can’t use their memberships.

For those facing unemployment from the COVID-19-induced closures, it’s an easy request to understand, she said.

“We understand we’re going to take a hit,” Calhoon said.

But the hope is that those who continue to have an income will maintain their memberships.

“What we’re saying is ‘If you are able to continue paying because you have a job, please keep paying so we can still be here for you when this is done.’”

Directly across Isaacs on the opposite corner, La Ramada Mexican Cuisine stood to benefit from the Roosevelt access, too, through construction. But social distancing measures have closed restaurant dining rooms so the business is focusing on takeout and curbside deliveries. Just a door to the east, neighboring Inkspirations Tattoo is also a shop affected more by social distancing shutdowns than construction.

Many businesses had been bracing for reductions after hearing about the hardships of their peers during the last stretch of work from Division to Roosevelt streets.

The six-stage project replaces underground utilities in conjunction with road surface improvements on Isaacs from Division Street to Tausick Way. It includes reconstruction of intersections at Roosevelt, which has already taken place, and Wilbur Avenue, which remains ahead.

The roughly $9 million project includes complete reconstruction of utilities, with the bulk of the work as the replacement of electrical conduit, water, sewer and stormwater infrastructure, plus traffic signal conduit underground.

Construction also includes new sidewalks and driveways. The work will connect bicycle lanes from downtown through Wilbur and beyond.

The first day the latest stage began made Lewis May a bit antsy as he arrived at his Economy Glass repair service shop. He’d heard an eastbound lane would remain to provide access to all the businesses along the construction zone. Being in a landlocked spot with no rear access made this particular detail extra significant for his operation.

But then he realized the eastbound access lane had been routed on the north side of the street and the route made sense.

“That first morning I was a little upset until I figured out what was going on,” May said.

Since then he’s been sure to communicate his needs to the crews, including when he knew he’d need more access for a motorhome customer. He said the experience has been much better than he expected.

“Nobody wants to lose business,” he said. “But it’s got to happen for the improvements to take place.”

It’s likely that business has slowed with more local residents hunkering down in place. But many of his customers tend to be in a state of emergency when they do need the services, and that part hasn’t changed as clients came in last week for cracked windshields and window replacements from vandalism.

Randi Kelly’s Eastgate Laundry Corner, which also has the benefit of access on an alternate roadway at Wellington Avenue, has also remained busy. For commercial clients, the down time is an opportunity to deep clean linens, bedding and other items. For residential customers, the equipment offered there is a necessity in the absence of their own appliances.

“I have not seen the business taper,” Kelly said.

“But we honestly wouldn’t have the business that we have unless we had the Wellington access.”

City Transportation Engineer Monte Puymon said work appears to be a couple of days ahead of schedule for now. He said Culbert’s efforts to keep access open for businesses has been essential with more operations on this stretch reliant on Isaacs to feed traffic.

Puymon said construction work is expected to continue through the social distancing efforts. Work crews have asked if the city would consider shutting down the entire stretch to get the work done quicker, particularly as measures to slow the spread of the curve have more consumers staying home.

But Puymon said the city is far from a decision like that.

“If a lot of them started closing up we could talk about it,” he said. “We don’t want to be the straw that broke the camel’s back.”

Meanwhile, for those affected by both construction and the virus, creative efforts are in place to keep the excitement alive for services.

At her yet-to-open yoga studio, Calhoon said she’s offering two weeks of unlimited yoga sessions to those who sign up for $20. The deal is good for whenever the operation is able to open.