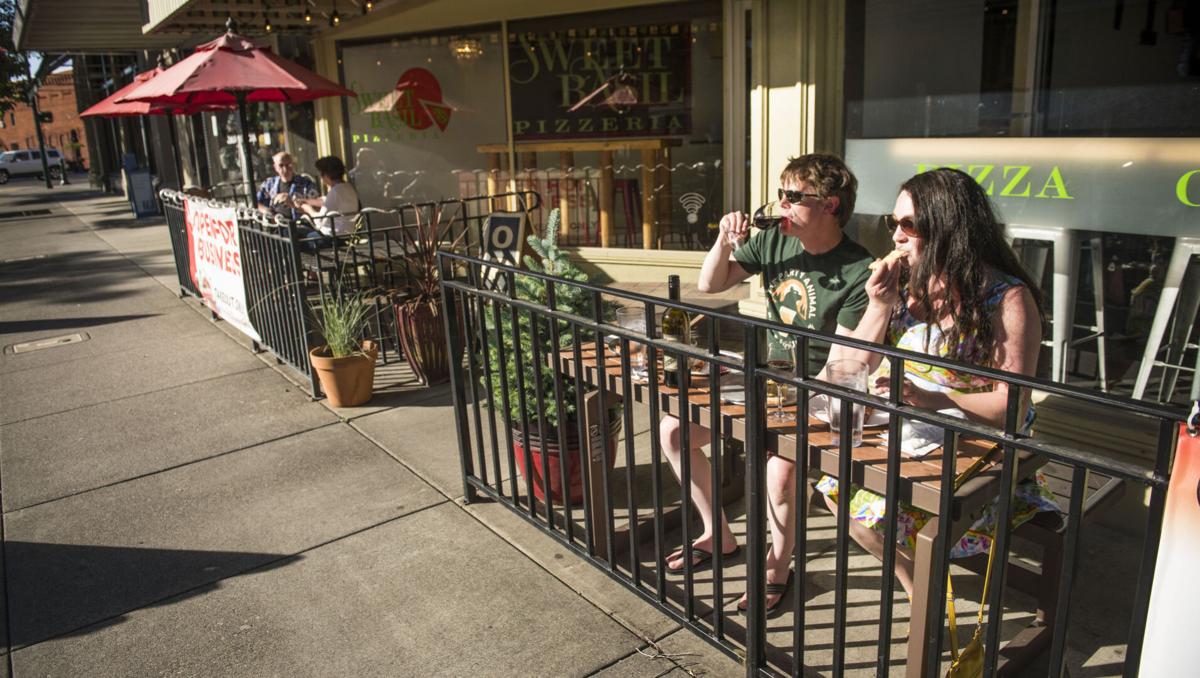 Ted and Ariel Anderson enjoy the sunshine, pizza and wine outside Sweet Basil Pizzeria on Wednesday afternoon. The two agreed it was great to be able to sit and eat at a restaurant with Phase 2 of the state’s Safe Start program announced in Walla Walla County that day. “And such a gorgeous day too,” Ariel Anderson said. 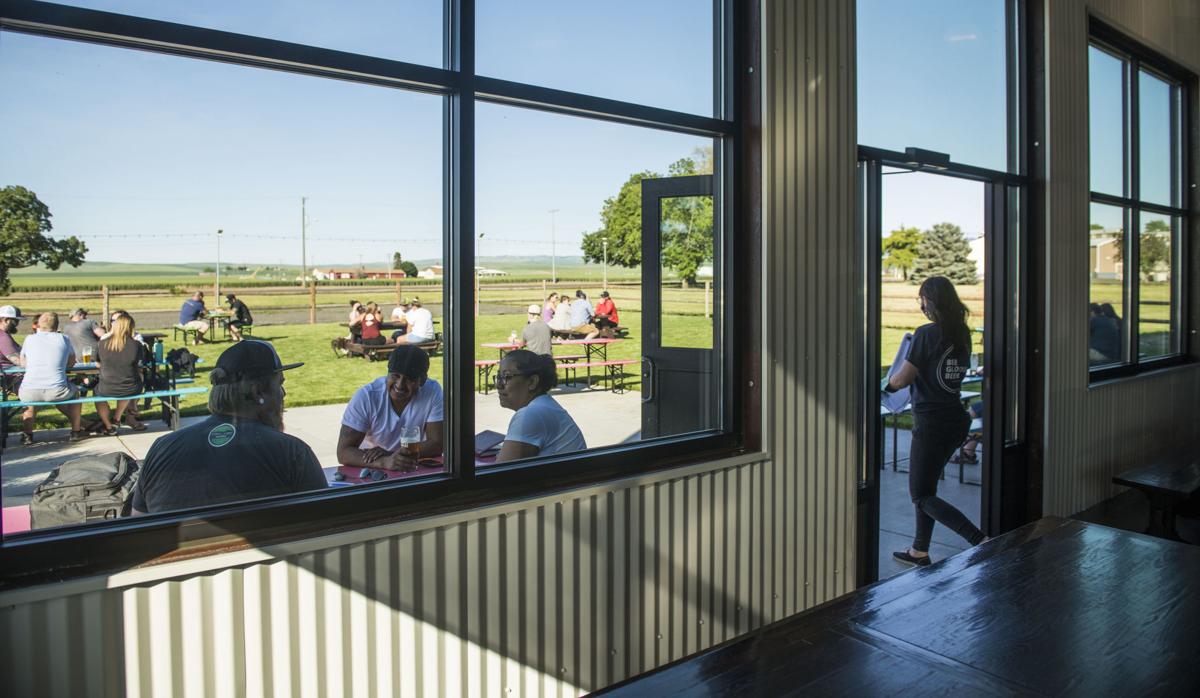 A couple dozen people enjoyed the first day of Phase 2 at Burwood Brewing Company on Wednesday afternoon. While restaurants, bar, breweries and wineries were giddy about Walla Walla County’s progression to Phase 2 of the governor’s Safe Start plan, it didn’t change much for some other businesses.

Ted and Ariel Anderson enjoy the sunshine, pizza and wine outside Sweet Basil Pizzeria on Wednesday afternoon. The two agreed it was great to be able to sit and eat at a restaurant with Phase 2 of the state’s Safe Start program announced in Walla Walla County that day. “And such a gorgeous day too,” Ariel Anderson said.

A couple dozen people enjoyed the first day of Phase 2 at Burwood Brewing Company on Wednesday afternoon. While restaurants, bar, breweries and wineries were giddy about Walla Walla County’s progression to Phase 2 of the governor’s Safe Start plan, it didn’t change much for some other businesses.

When news began to spread early Wednesday morning of Walla Walla County moving into Phase 2 of Gov. Jay Inslee’s Safe Start plan, some businesses got busy with preparations while others continued to play the waiting game.

Phase 2 is a big step for local restaurants, bars, wineries and breweries as they can finally welcome guests back indoors and on patios, with some restrictions in place.

Twenty-four counties in Washington are now in Phase 2, which also allows salons, barber shops, accountants, pet groomers, fitness centers and a smattering of other businesses to resume work with limitations such as maintaining 6 feet of space from one another, requiring employees to wear masks, sanitizing surfaces and many more.

The full list of guidelines can be found at ubne.ws/safestart.

Walla Walla County health officials said responding to any reports of violations of those guidelines will be a multi-agency response.

Complaints will be fielded by the Department of Community Health staff, who will then talk to those involved. If further enforcement is required, the matter will be referred to either local law enforcement and-or the state’s Department of Labor & Industries.

County officials said there is no additional money available for such enforcement, thus it becomes an unfunded mandate to agencies charged with enforcing COVID-19 rules.

There is not a plan to spot check every complaint received, health officials noted, but if a business requests help implementing a reopening plan, review and recommendations will be provided.

Within minutes of the announcement from county commissioners, restaurants such as Clarette’s, La Ramada, Stone Soup Cafe and Sweet Basil Pizzeria were posting their reopening plans on social media, effective immediately.

By Wednesday night, restaurants were boasting online about their returning customers.

Sue Chestnut, co-owner of the The Brik Bar & Grill on the corner of South Ninth Avenue and Plaza Way, said the restaurant opened its doors at 4 p.m. Wednesday. She spoke with the U-B shortly after a hurried opening.

“We’re very excited,” she said. “Our first patio guests are outside right now.”

Chestnut said they had already done most of what needed to be done based on the state’s requirements for Phase 2, in case this day came. She said they were planning on Friday at the earliest but quickly got some chores done when the surprise announcement came Wednesday.

“We were ready,” Chestnut said. “We did some last-minute things like window washing … we just want our guests to feel comfortable.”

“It’s kind of too little, too late,” Goodall said. “You can’t shut businesses down for months on end and expect things to be cheery again.”

Goodall said he hadn’t hashed out a reopening yet for his one-man operation. He’s been closed since the COVID shutdown in March.

“I had people calling almost every day, people wanting to buy guitars, wanting to relieve mental issues. And I said, ‘Sorry, I can’t sell to you; I’m not essential.’”

For his shop, which typically only has about three people shopping at one time at the most, he said things will likely bounce back, but it will be slow.

“You’re not gonna see crowds like you used to,” he said. “It’s hard to say. This whole things has been like the Twilight Zone.”

Personal trainer and yoga instructor Susan Hoverson, at In Sync Fitness on The Dalles Military Road, was in a similar spot as a small operation. She hardly had large groups coming in anyway, save for yoga classes. Much of her instruction was, and will continue to be, one-on-one.

But now she’s also moved her business into online yoga instruction and even developed an app.

“I’ve embraced the virtual thing for now,” Hoverson said. “I branched out and did my thing.”

Hoverson said the initial shutdown of the economy was a frightening moment for her. But after getting over her initial insecurity about it, she stretched out into the online world and has found comfort and some success there.

“For me, it just kind of reinforced the idea that a gym, like a church, it isn’t a place, it’s an idea,” Hoverson said. “It’s the idea of a healthy and active lifestyle.

“I think (the shutdown) made people creative, but I know some people really struggled with it.”

Hoverson said she will still dabble with her one-on-one instruction time. One big restriction in Phase 2 is that fitness centers can only have up to five people in groups, which makes class instructions difficult.

Hoverson will continue her online yoga courses until more restrictions are lifted.

The same thing applied to larger gyms, such as the one operated by the Walla Walla YMCA.

CEO Karen Hedine said they are not ready to open, given the group size limitations.

“It’s just not something that makes sense, to open at this time,” Hedine said. “We have really liked (Inslee’s) plan … when he says go (for Phase 3), we’re ready.”

Many salons and barber shops were also not quite ready to go but were making plans to open soon without cutting corners.

Monday seemed to be the target date for most, including Beehive Cut + Color Bar, Capital Barber Shop, House of Dapper and Misbehaven Spa & Salon, to name some.

“We can’t wait to start welcoming you back,” Misbehaven owners wrote on social media.

The post noted something similar to what other salons had stated — that barbers, nail technicians and more personal-service providers needed additional time to get shops ready, supplies sanitized and safety measures in place.

“We will be taking a few days to educate our service providers on the new protocols and to focus on the hands-on learning that was not possible during (quarantine),” Misbehaven owners posted to social media.

Some measures for salons will likely include drastic measures such as one Beehive owners described on social media — waiting in a vehicle before entering the business instead of using a waiting area.

But there was no waiting for some businesses. Bright’s Candies on East Main Street gladly welcomed guests to its officially open seating area to enjoy some sweet treats.

Burwood Brewing Company in the Walla Walla Airport Business District opened by 2 p.m. Wednesday, and a couple dozen people were ready to return to the watering hole right away.

Not far away, Quirk Brewing was quickly concocting a strategy. Owner Troy Robinson said he too was surprised by the announcement Wednesday.

“We are very excited,” Robinson said. “We were expecting to start June 1, so today was a surprise, a pleasant one. But we’re happy to open a few days early.”

Robinson said they hope to have everything ready by Friday.

From the Airport District to Eastgate to downtown to College Place, businesses of the Valley all embraced the reopening plan in their own way.

And while most will likely have to wait a little longer for things to get back to normal, all agreed that Wednesday’s news was a welcome sign of relief.

“I think America will bounce back,” Goodall said.