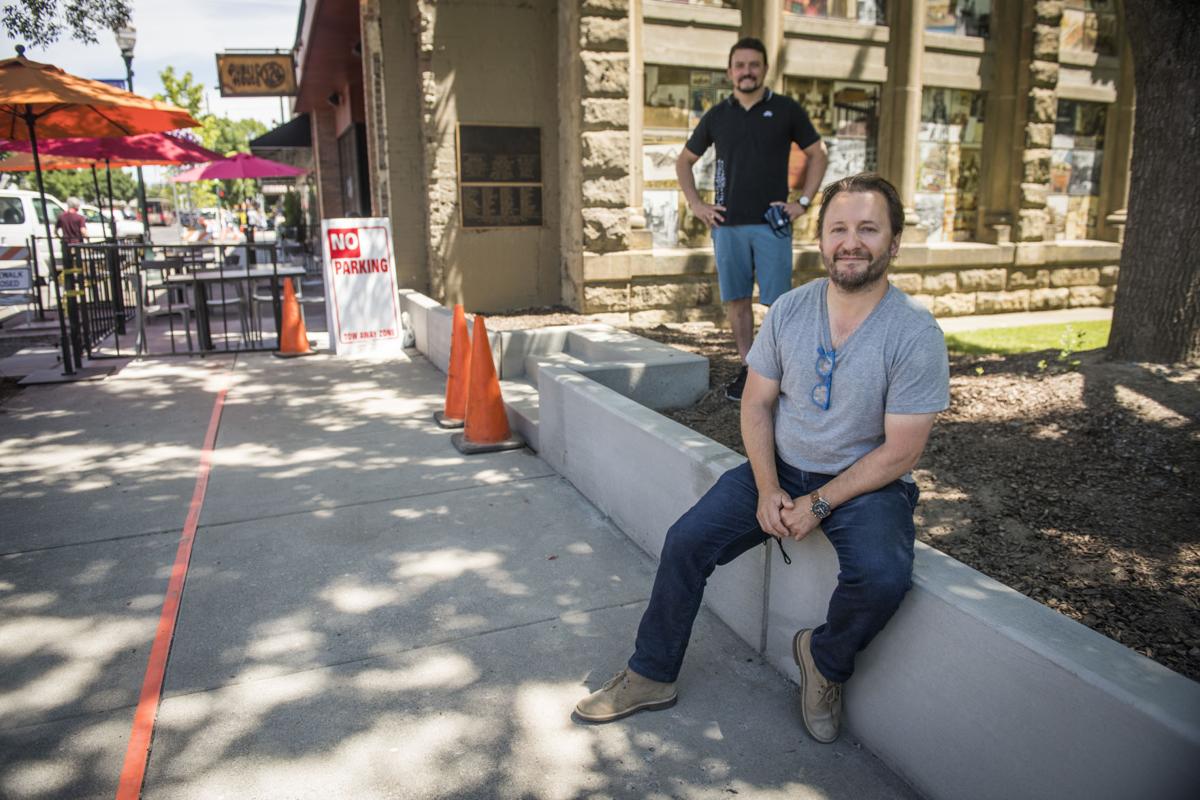 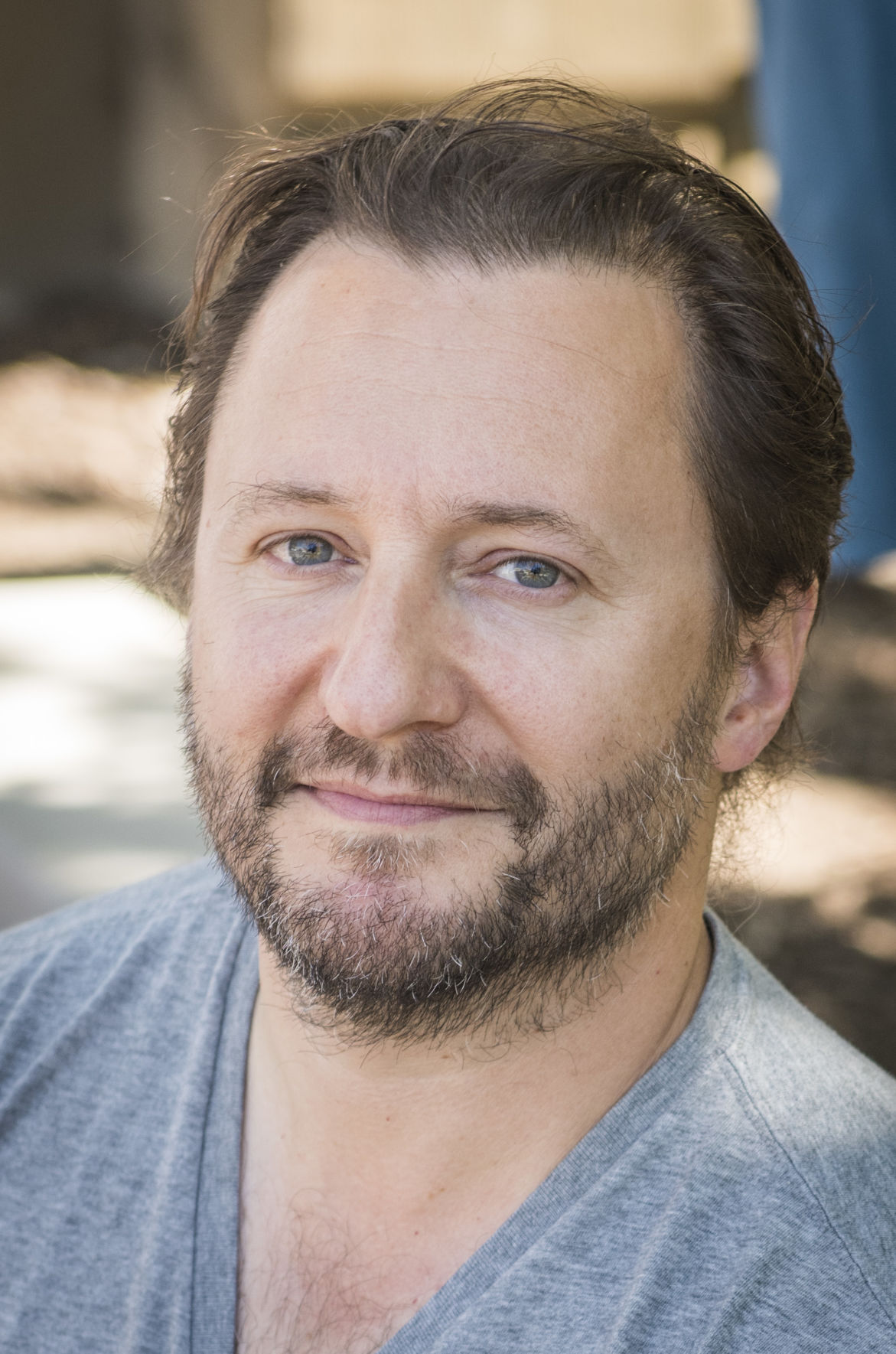 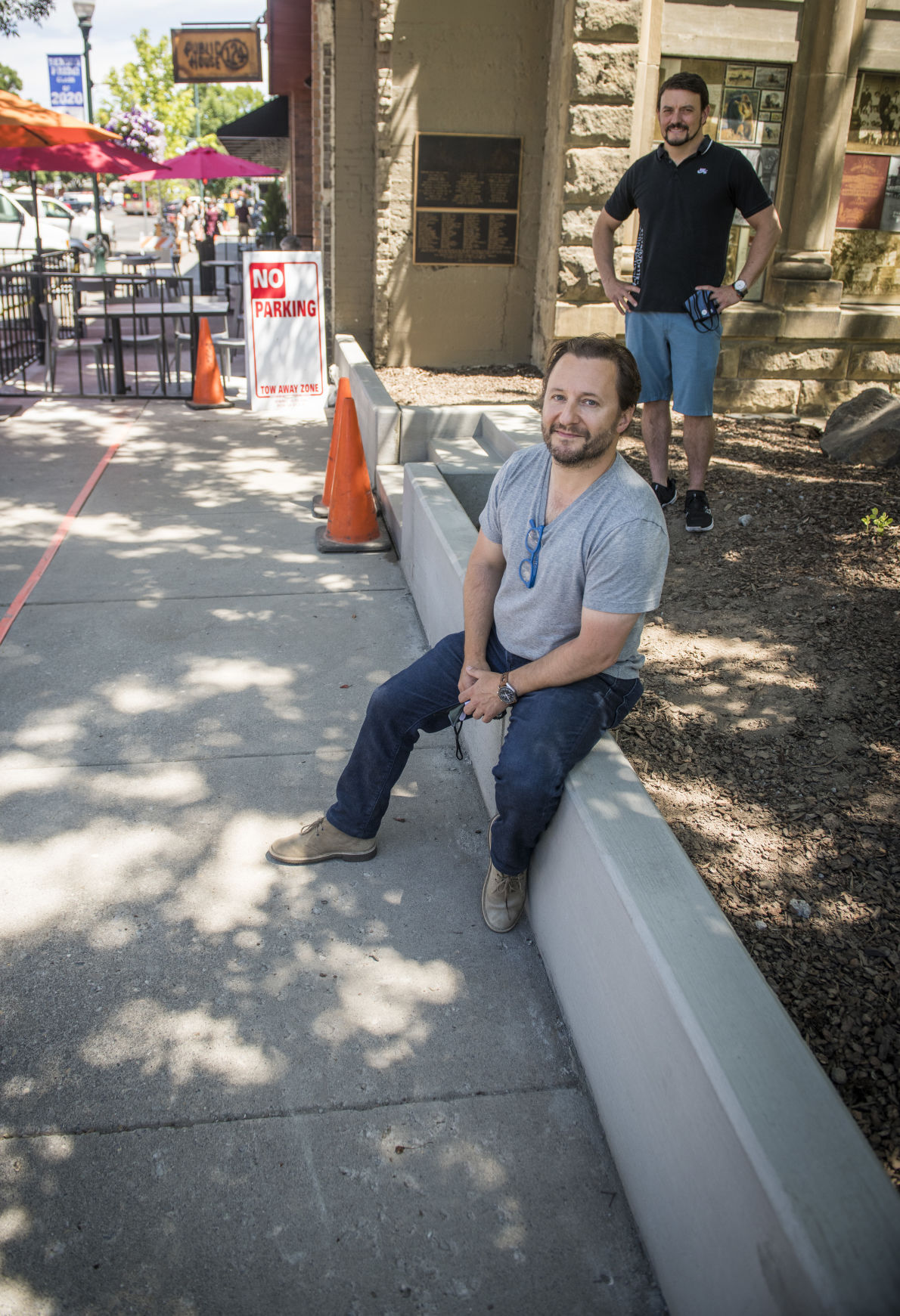 On a Friday afternoon, with temperatures climbing north of 94 degrees and unrelenting sunshine, people were happily gathered around tables outside of Walla Walla restaurants.

Normally, you’d likely see a larger split between people choosing the cool of air-conditioned indoors over the blistering heat. But some of them probably had no choice.

“Dining alfresco is gonna be everything this summer.”

So says Alex DeMambro, the brain behind DeMambro Architecture of Walla Walla.

DeMambro was there first-hand, giving a guiding voice to city leaders as they planned for Phase 2 of the Safe Start program. The phase allowed restaurants to open at 50% capacity with safety measures in place to protect patrons, passing pedestrians and staff from the novel coronavirus.

Reopening at full cost with just half of the capacity was not entirely enticing for some operators. That was, until a plan to expand dining rooms onto the sidewalks and, in some cases, into the street, helped build capacity and offered a way to ensure distancing at the same time.

The city is spending about $250,000 of the more than $1 million it received from Coronavirus Aid, Relief and Economic Security Act funds for furniture, lighting systems and more.

The focus outside may be temporary for most of the restaurants, but DeMambro believes the move is igniting a trend that will last into the future.

“And that’s what’s going to happen with architecture now,” he said from his Main Street office, looking out the window at some of the seating. “You’re going to see a lot of alfresco dining. You will see a lot of blurring of indoor-outdoor spaces.”

That’s the case, he says, from Main Street businesses to mainstream homes.

Alfresco all the way

Little groups of brightly colored orange chairs purchased by the city are dotted up and down the streets of Walla Walla these days, particularly downtown.

On Friday, a group of four people sat around a table on the specially purchased chairs next to Colville Street Patisserie, enjoying gelato in the shade.

Down the street, at Stone Soup Cafe, overflow seats were taken up beyond the restaurant’s railing. Guests sipped on ice water and enjoyed sandwiches packed with cold cuts on a hot summer day.

Last year, these people may have thought themselves at least slightly strange for parking their picnics so close to the sun.

But that’s just the way it will be for now, DeMambro said.

“... Now restaurants are finding themselves now really endeavoring to do this social distancing thing right,” he said.

Before the pandemic, “it would’ve been, ‘Well, what’s the city code say?’”

Then he, as a designer, would have looked at the distance between the chairs and the curb from existing railing, and so on.

This year, under changes to the city’s code to enable the movement, he helped push beyond what had previously been allowed.

Those were the things DeMambro relayed to the city as they began talks with restaurants. He took a walk with City Manager Nabiel Shawa and other city leaders and said he “did what architects do.”

He had been called by Matthew Price-Huntington, his friend and co-owner of Public House 124. DeMambro said he was asked to find a solution to fit more people outside.

That particular restaurant is one of four doing something more permanent, unlike the taped-off zones others are relying on. Public House 124 will now have a small section that somewhat extends into nearby Heritage Square Park.

DeMambro said he watched concrete get poured recently on that project. Brasserie Four, Bacon & Eggs and TMACS are others with major expansions for what are referred to by the city as “parklets,” structured outdoor dining areas that expand from the sidewalk in some cases into parking spots out front.

DeMambro also took the time to go to other restaurants he frequents and offer some help pro bono. Places such as Saffron Mediterranean Kitchen and Passatempo Taverna. He simply asked: “What do you need?”

With outdoor dining being his view of the future, he wanted to help restaurants get a leg up on the trend.

As restaurants adjust to the new normal in their temporary patios, DeMambro sees permanent patios as a major trend in development, and not just at businesses.

DeMambro was delighted when talking about the idea.

“I could talk about this for hours, by the way,” he mentioned with a chuckle.

Recently, he began work on a 1,400-square-foot outdoor patio design, complete with a living area, dining area and outdoor kitchen. The patio is partially walled with one wall completely missing to display serene views of the countryside.

He’s also setting up his own home to have a direct path from a side-yard gate to his back patio — something he knows is getting incorporated into more house plans.

He pointed out that this isn’t the first time a pandemic has built in new trends to home designs.

In the 1920s, right after the Spanish Flu pandemic, homes were designed with large entryways. There was plenty of space to remove your coat, gloves and shoes. There was also a small sink in the foyer area to wash your hands.

Like the Spanish Flu encouraged sanitary, separated entryways, the social distancing patterns of the modern era could give people room to breathe.

“We may not want to have people come over to our house right now, but we love it when someone comes over maybe to have a glass of wine in the backyard. ... So maybe the backyard needs to be a little more formal these days.”

A war for the walkway

In an ideal scenario, restaurants would easily be able to maintain social distancing, as would pedestrians.

Unfortunately, there has been a battle over sidewalk space in Walla Walla before. It’s something DeMambro encountered early on when coming here.

DeMambro grew up in Boston and first attended college for economics before tilting toward architecture.

He worked for a firm in Boston called Perry Dean Rogers Partners Architects.

DeMambro ventured to Walla Walla in 2008 and began working under the likes of Paul Tomkins and Greg Flowers — well-known designers in the community.

He began his own firm in 2015 and has been involved in some highly touted local projects including the remodel of Passatempo Taverna and Saffron Mediterranean Kitchen, plus tasting rooms for Goose Ridge Winery, Barons Winery, Time & Direction Wines and Force Majeure Wines, and he helped with large-scale projects like the Gesa Power House Theatre and new facilities for Doubleback and Revelry Vintners.

He’s also done three farmhouses in the Valley, and he’s currently most excited about the new project from winemaker Chris Figgins being installed east of town up Mill Creek Road. That project includes 6,000 square feet of caves dug into a hillside.

Having dealt with a number of such projects, it would seem that setting up some tables, chairs and umbrellas on a sidewalk would be like a stroll down Main Street. The problem is that if there are too many chairs, there’s no strolling down Main Street.

“I happen to agree,” DeMambro said about the narrow walkways in some areas of downtown. “This is a larger conversation. I’ve been in the Valley for about 12 years or so, and Day 1 when I walked into a City Council meeting, it was parking meters. We’ve been having this conversation for a long time.”

He thinks the sidewalks could and should be wider, but that will take much more planning than putting down tape and sectioning off temporary seating areas.

“It’s just nothing but good,” he said about sidewalk seating. “That being said, if somebody complains about the narrow sidewalks, I agree with them. I agree.”

He also mentioned other alternatives such as the First Avenue pedestrian plaza the city plans with the shutdown of the roadway between Alder and Main streets. That space is being arranged by architect Jon Campbell.

All of the recent efforts DeMambro believes are building toward a better designed city.

“It’s a step in the right direction,” he said. “It’s a temporary thing. I think it’s wonderful the city is trying it out because we’ve been talking about it for years. Well here’s an opportunity to try it out. ... If we hate it, we hate it. We haven’t done anything physical to the sidewalks ...

“So I’m very proud of it — proud of the city really stepping out and helping these businesses.”

You can find more of DeMambro Architecture’s work online at demambroarchitecture.com.