You are the owner of this article.
Edit Article Add New Article
You have permission to edit this article.
Edit
Home
NEWS
SPORTS
THINGS TO DO
OPINIONS
CLASSIFIEDS
PRINT REPLICA
LIFESTYLES
VISITOR GUIDE
PHOTOS
1 of 3 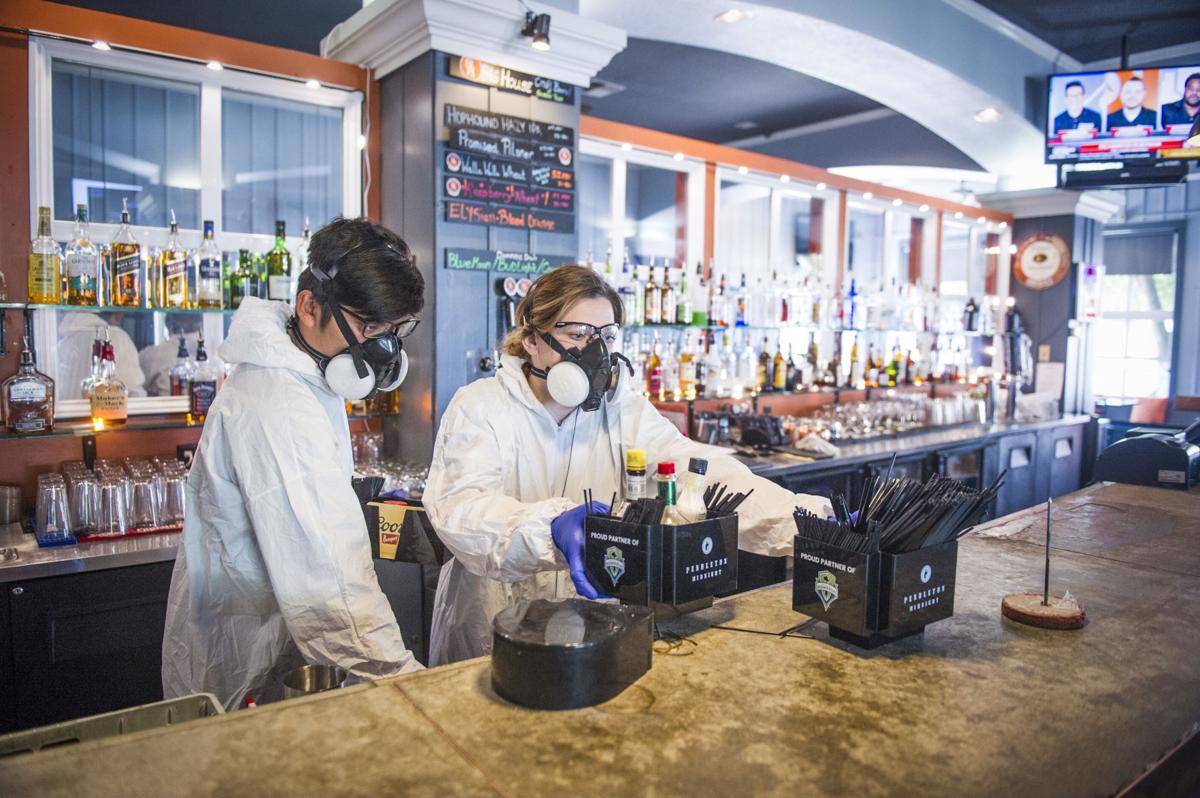 Miranda and Octavio Carmona, owners of Rags to Riches Cleaning Co., prepare to do a COVID-19 cleaning of Big House Brew Pub on Saturday morning. 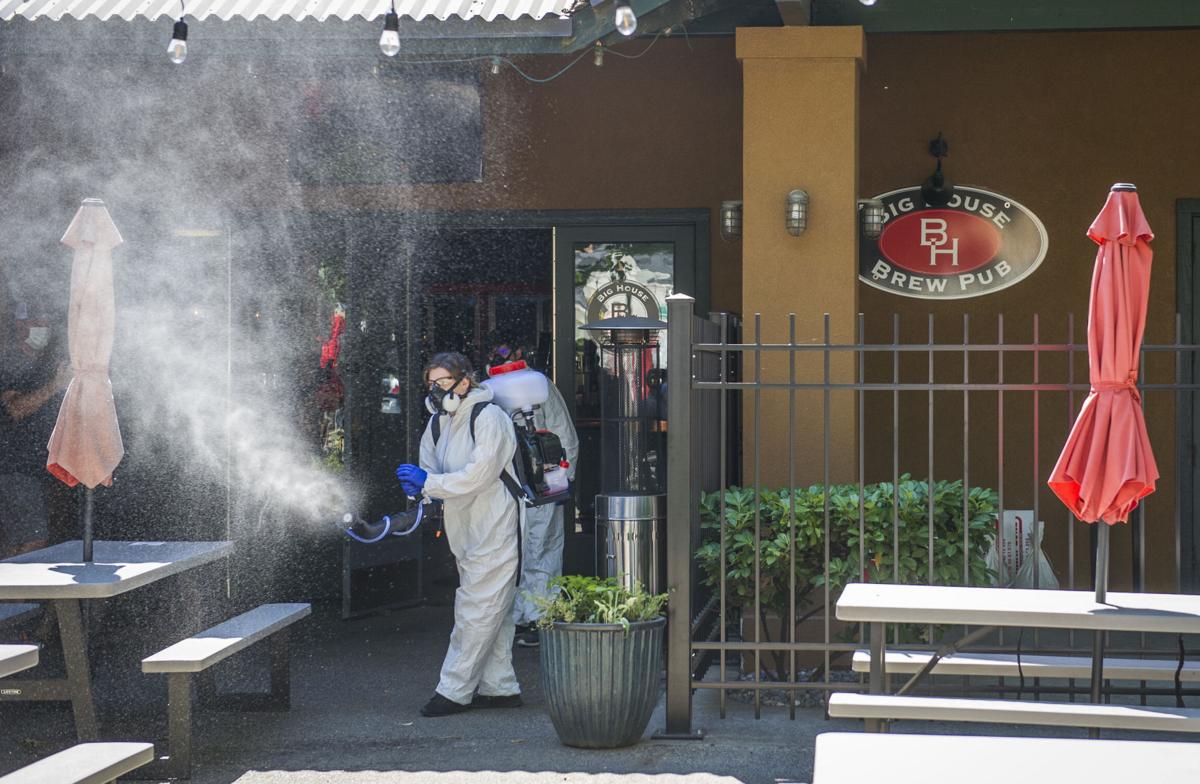 Miranda Carmona of Rags to Riches Cleaning Co. uses a fogger for a COVID-19 cleaning of the Big House Brew Pub patio Saturday morning. The business is using caution in preparing to reopen after an employee tested positive for the disease last week. 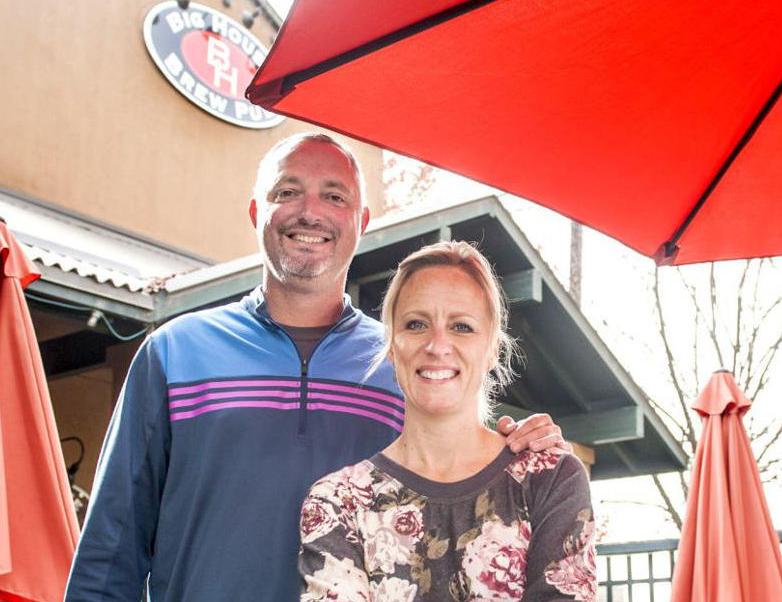 Miranda and Octavio Carmona, owners of Rags to Riches Cleaning Co., prepare to do a COVID-19 cleaning of Big House Brew Pub on Saturday morning.

Miranda Carmona of Rags to Riches Cleaning Co. uses a fogger for a COVID-19 cleaning of the Big House Brew Pub patio Saturday morning. The business is using caution in preparing to reopen after an employee tested positive for the disease last week.

After being closed for two and a half months because of the COVID-19 pandemic, Big House Brew Pub was cooking up incredible business. And then an employee tested positive for the virus.

The month of June was the best month the Walla Walla restaurant and brewery has ever had, said Jason Hutchinson, who owns and operates the restaurant with his wife, Denyse.

Business was up 30% over last year, he said.

During the initial COVID-19-related shutdown, the Hutchinsons took the opportunity to expand the patio at the restaurant, put in new fencing and spruce up the interior. Even at 50% capacity, as required by the state during Phase 2 of the Safe Start program, a heavy flow of customers ate and drank at the business on the edge of downtown Walla Walla.

Heading into the holiday weekend, Jason Hutchinson expected it to keep climbing.

Instead, he spent the Fourth of July not watching fireworks but rather a cleaning company fogging up his business with a cleaning solution.

“It’s way above what the health department told me to do,” Hutchinson said about the deep cleaning. “But I want people to feel safe being here — so that’s our goal.”

When Hutchinson was told by the employee that she tested positive Wednesday, he said it was like his heart sank into his stomach.

“Absolutely, that was my biggest fear about reopening,” he said.

He had expected eventually a customer would come in carrying the coronavirus and he would get the inevitable call from the Walla Walla County Department of Community Health as contact tracing was conducted.

He noted how many people came to the business from Yakima, Tri-Cities, Seattle and Portland. A problem he’s seen first-hand, as many businesses have locally.

It was only a matter of time, in his mind, before someone cross-contaminated the community.

Instead, it was one of his own employees who found out she had come in close contact with the virus. She began feeling some light symptoms, and on June 25 Hutchinson told her to stay home.

The test returned positive Wednesday, setting in motion calls by Hutchinson to trusted friends as he sought advice from others in the industry, including a contact with his food supplier, U.S. Foods in Spokane.

The best course of action, in Hutchinson’s mind, was to be completely honest from the start.

“I wanted to make sure I was out in front of it,” he said at the empty restaurant Thursday morning. He was cycling through emails at the time.

“I posted (online) the exact dates she worked,” Hutchinson said. “We’ve tried to, in the two years we’ve owned and operated (the restaurant), to operate with complete transparency and openness with the community.”

Hutchinson has a fond place in his heart for the Valley because he grew up here. He moved back two years ago after buying the restaurant, formerly called Mill Creek Brew Pub.

Yet after the pandemic-induced closure and an unbelievable rebound, he perched in front of his laptop, shifting eyes between the screen and the door.

Every once in a while, someone would try to enter, and he would have to share the news with them. Each potential customer expressed their sorrow for the situation and wished him luck. Then Hutchinson returned to his laptop, responding to emails.

“I’m probably about 30-deep now with people who were here on those dates and those times,” he said.

After the former patrons shared their information, he would back-trace them with their credit card numbers and find out if the server in question was at their table.

“I learned from my dad,” Hutchinson said. “Basically, you gotta operate above board at all times and operate with integrity — and I shared that with my staff.

“I’m not going to try and hide the truth, because eventually it will come out and we’d rather just be up front and honest with what happened, and we’ll move forward and do the right things.”

Hutchinson had a similar example to look at when Graze owners John and Becca Lastoskie temporarily shut down all of their locations in Walla Walla and Tri-Cities after a family member of a worker tested positive in March. The employee ended up not having the virus, but they erred on the side of caution.

“And I think that’s the right thing to do,” Hutchinson said of their decision. He’s experienced similar sentiment from others.

“I got a text message from another restaurant owner here in town and they said ‘thank you for setting the bar,’” Hutchinson said.

As far as the safety measures go, he felt they were doing everything they should’ve been doing. He had staff members, following a meeting, thank him and say they felt safe in that environment.

Still, Hutchinson has reason to be even more cautious now.

Hutchinson had high praise for Gov. Jay Inslee and his efforts to slow down the spread of the virus. Even the governor’s controversial decision to have mandatory logs at restaurants, which he later rescinded, would’ve been useful, Hutchinson said. Now, Big House’s non-mandatory logbook is filled with explicit insults for the governor instead of useful information that could help the restaurant and potentially infected customers now.

“They would love it if their name was in there now,” Hutchinson said. “But people will have a short memory, and I guarantee when we reopen nobody will be signing that book. It is voluntary, but I wish it was mandatory, but that’s not on me.”

Just hours after Hutchinson spoke on Thursday, Inslee mandated that all businesses must require their patrons to wear masks upon entering, further bolstering his previous edict telling people to wear masks in public. That’s something Big House was already requiring customers to do, and it had become a sticking point with some people.

“(Some) people were super rude,” Hutchinson said. “It was terrible. They said we were taking away their rights, but I just want you to wear from the door to the table and then you can take it off.

“I’ve got a 19-year-old hostess and she’s getting berated and belittled and she’s in tears because we’re trying to follow the rules.”

Hutchinson’s resolve to keep the restaurant virus-free has only been boosted.

The couple shut down the restaurant on their own accord — it was not required by any government agency. The deep cleaning was also not mandatory.

The employees will continue to wear masks at all times, sanitizer will be placed all over and all other necessary protocols will be followed to the nth degree and more, Hutchinson emphasized.

As he observed the restaurant, which had been so full just a day earlier, he reminisced on how much worse it could’ve been, which is why he went the extra mile.

“For me, my grandparents live here in town and they’re in their 90s,” Hutchinson said.

He leaned back and pointed at a table across the room.

“Two weeks ago, they were sitting at that table right there. If they get the virus, it’s not going to be good. I couldn’t live with myself if that happened, and somebody else’s grandparents are gonna be in here the next day.

“We’ll survive the monetary side of it, but that part’s inconsequential to me if we get somebody sick.”

Big House is expected to reopen either Wednesday or Thursday this week — about two full weeks after the server started feeling symptoms.

“We’re gonna be more strict when we reopen,” Hutchinson said. “Because I don’t wanna deal with this again.”