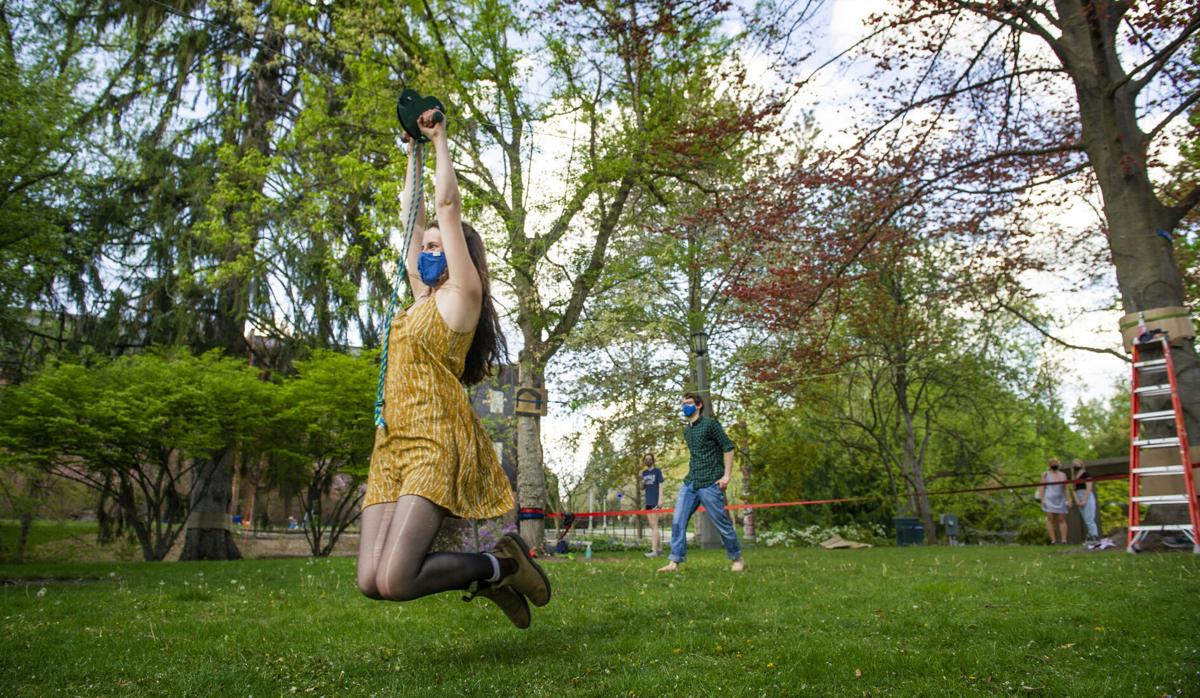 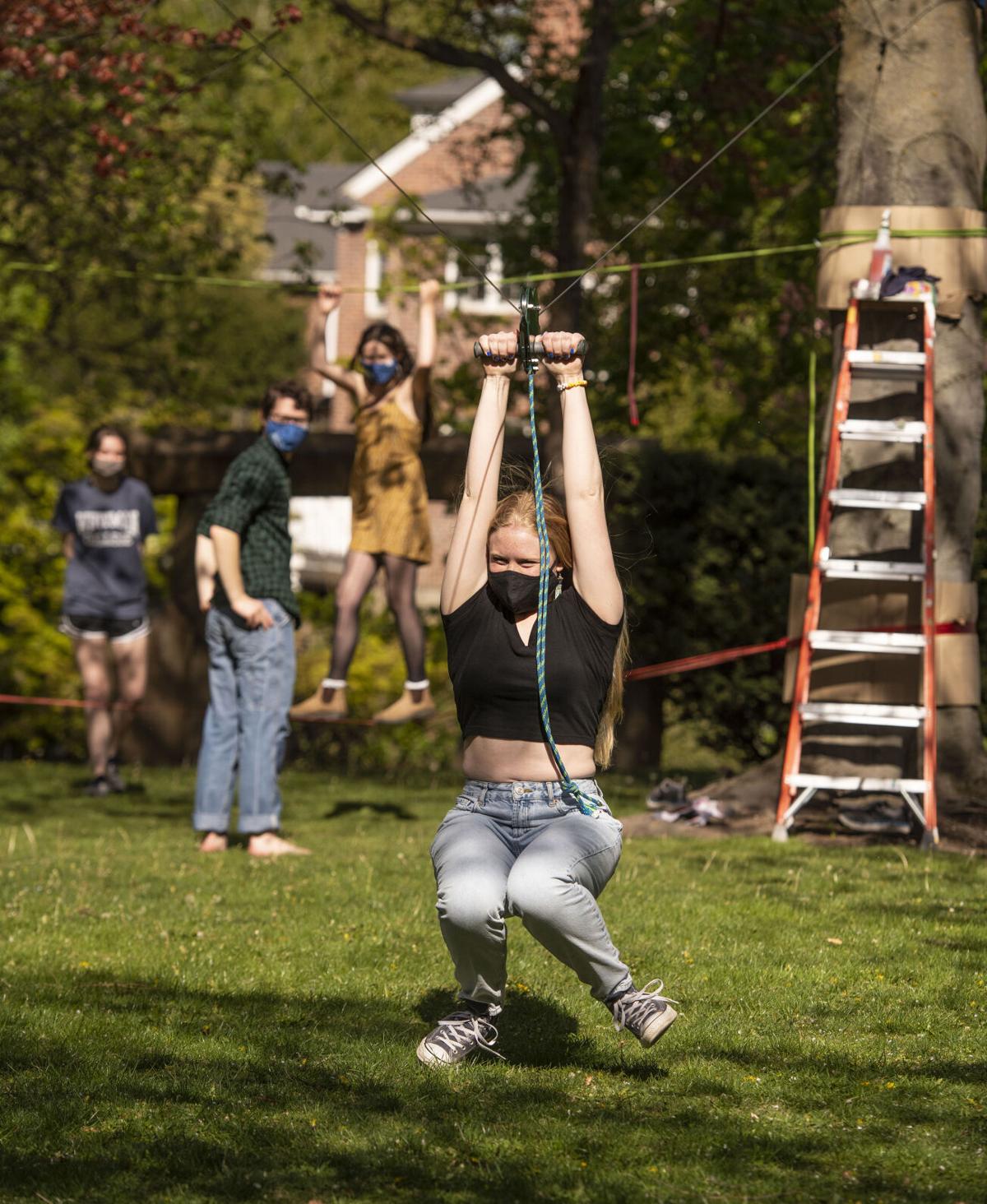 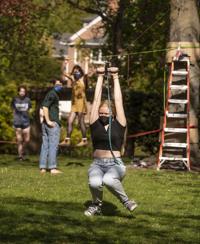 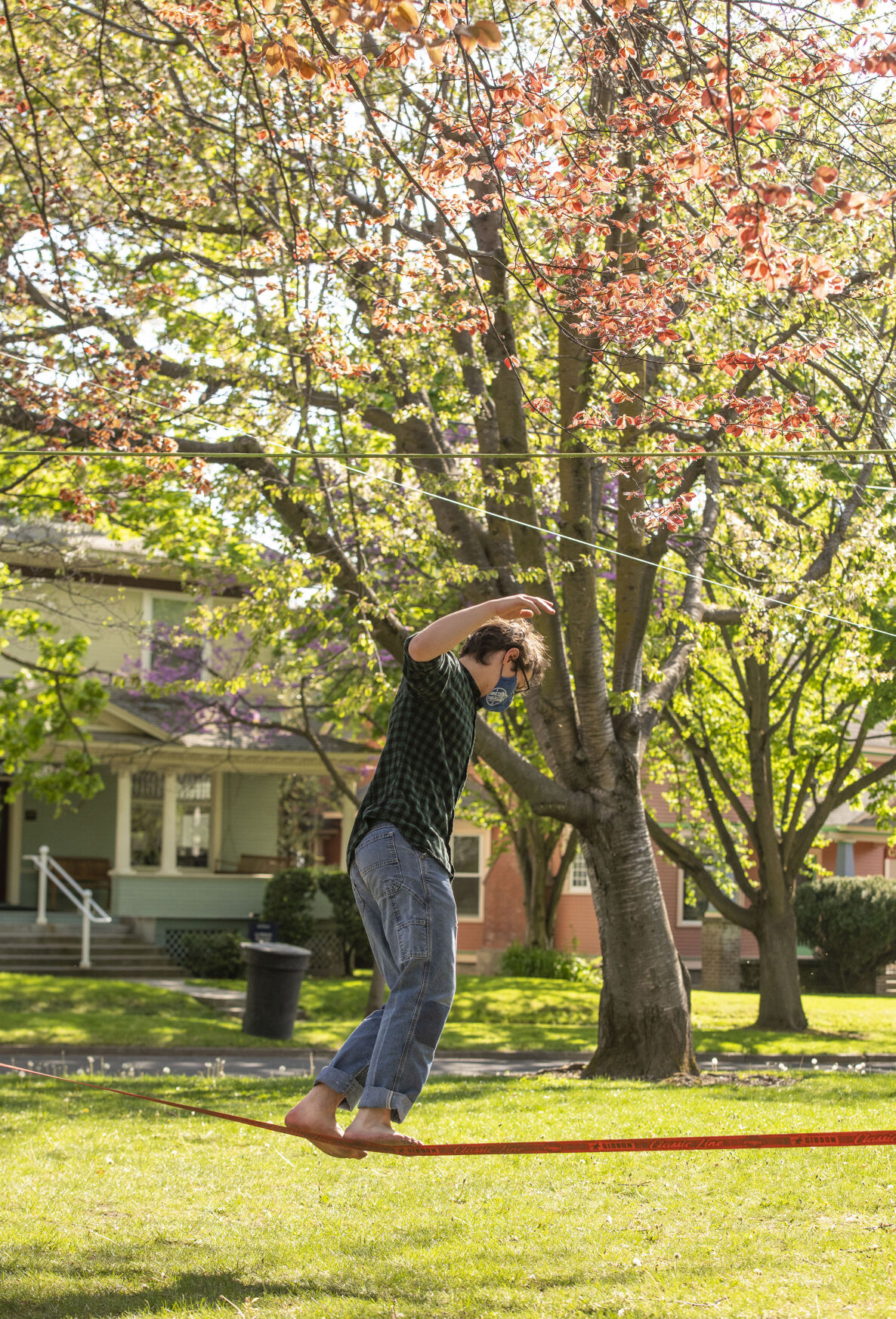 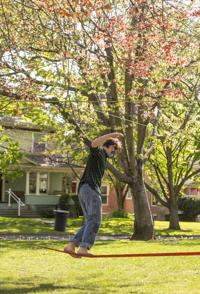 Outdoor Program volunteer Sam Branstad Phillips prepares to dismount the slackline during a program pop-up on the campus Thursday, April 22, 2021.

Outdoor Program volunteer Sam Branstad Phillips prepares to dismount the slackline during a program pop-up on the campus Thursday, April 22, 2021.

It was a festive scene Thursday, April 22, at Whitman College as students were walking a slack line, riding a zip line or navigating a Tyrolean traverse under the sun.

The activities were part of a pop-up event put on by Whitman College’s Outdoor Program.

Whitman College Outdoor Program assistant director Stuart Chapin said the event was to provide entertainment in a year when many events were cancelled.

“We have been running a variety of things, mostly on the weekends,” Chapin said. “We have been adapting because we haven’t been loading students into vehicles and traveling.”

Some of the pop-up events aligned with the five spring break days scheduled throughout the semester.

In a normal year, students have two full weeks for spring break. This year, the college wanted to discourage students from traveling during the COVID-19 pandemic.

Initially, the semester began a week later and spring break was reduced one week, scheduled for March 22-26. Later, the school decided to spread the break over five separate days, March 8, March 23, April 7, April 22 and May 7.

Program planned to offer special events for each day off, including zip and slack lines days, and a bicycle repair station to gear bikes up for spring, Chapin said.

A “Kayaking in the Pool” event will be held May 7, the final day of spring break.

Not all students approved of the idea of splitting up spring break. Senior Chloe Daikh said the decision took away needed rest time.

“On the one hand, I understand why they did it,” Daikh said. “But it has made this semester so hard. I don’t feel rested at all after the (single) days off … I don’t think one day off is enough of a breather.”

This had academic effects on her as well, she said.

“Just with the amount of work I have as a senior, I do seven to eight hours of homework on the days I have off,” Daikh said.

While she thinks the move prevented students from traveling, she’s also disappointed that the college didn’t trust them to do the right thing.

“The school had us sign a community pledge at the beginning of the semester saying we wouldn’t leave,” Daikh said. “So it feels a little frustrating that we signed that pledge, and then they assumed we wouldn’t follow it.”

Whitman College joins other Washington schools to require COVID-19 vaccine, WWU and WWCC do not

Blue Mountain Land Trust (BMLT) along with a number of regional partners, will be hosting tw… Read more

Join us for Waitsburg"s "One of a Kind" Classic Auto Show, May 14 at 6PM for our cruise star… Read more