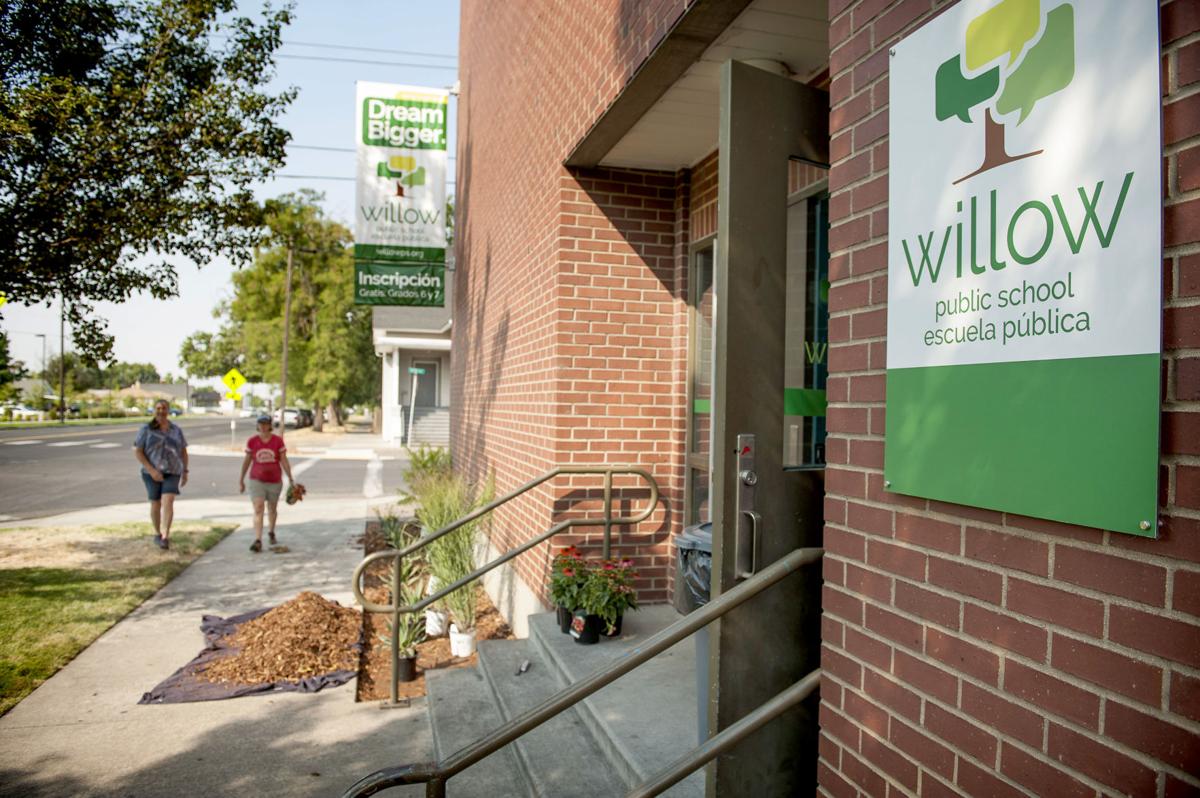 Alison Kirby, left, and Emily Asmus worked on getting plants ready for planting on the south side of Willow Public School on Saturday morning. 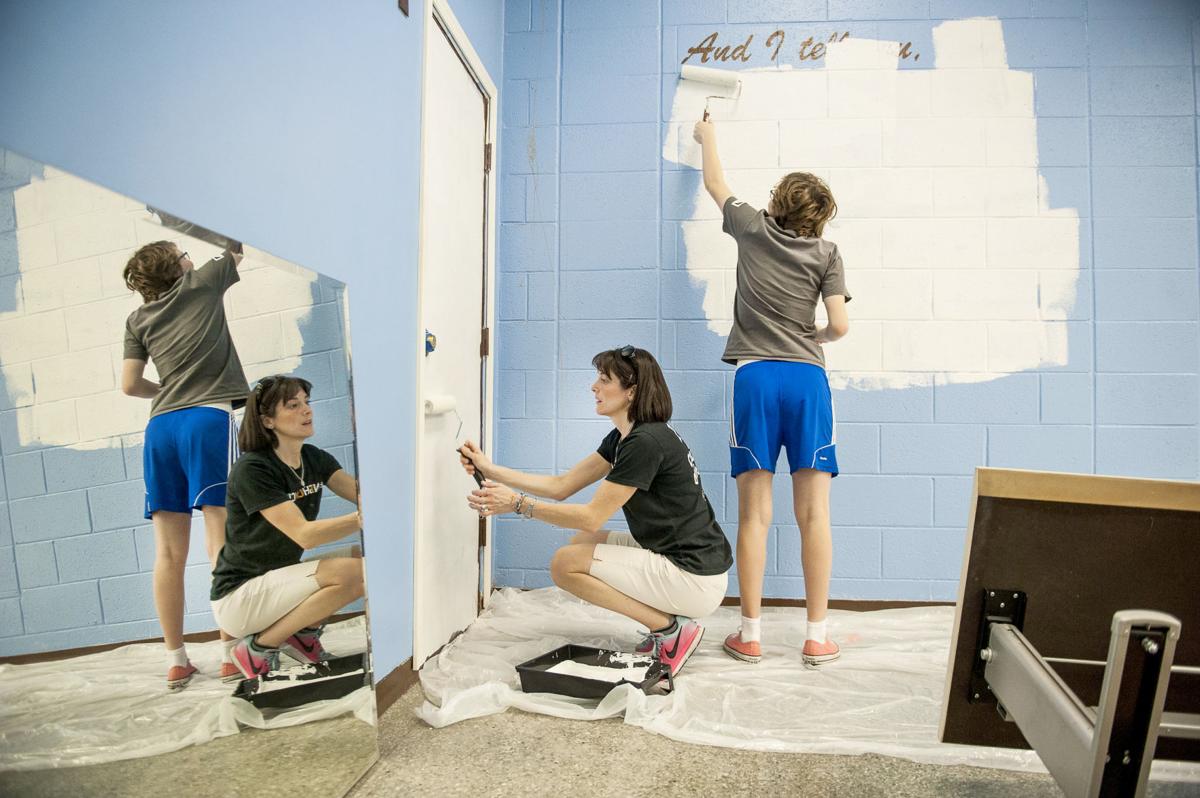 Volunteers Chandra Hall, crouching, and Keeley Hall, 16, help out with some painting in one of the large rooms at the new Willow Public School on Saturday morning.

Alison Kirby, left, and Emily Asmus worked on getting plants ready for planting on the south side of Willow Public School on Saturday morning.

Volunteers Chandra Hall, crouching, and Keeley Hall, 16, help out with some painting in one of the large rooms at the new Willow Public School on Saturday morning.

A furious waggling of fingers greeted Joelle Pomraning’s news of the day — her last required certification test was out of the way, and she had just been cleared by Washington state to teach math at Willow Public School.

The announcement came at circle time for Willow’s staff, part of a routine that will allow employees to come together before and after school to share feelings and confirmations, to seek advice and speak aloud the day’s experiences.

Feedback comes via those waving fingers to express excitement and other hand signals to indicate listening and hearing, for example.

There’s a lot to share just a few days before the school officially opens. In spring, Willow officials leased space once occupied by the former St. Patrick Grade School on the Alder Street campus of St. Patrick Catholic Church. That moment came about after being granted charter school status in 2015 and a number of failed attempts to secure physical space in the years in between.

Since March, however, it’s been an flat-out race to the finish line, which will be marked by Monday’s door opening to about 100 students at 7:45 a.m.

A long to-do list has included hiring and training a staff of 20, recruiting the sixth- and seventh-graders Willow will educate in its debut school year, and preparing the parish space to become a public school five days a week.

“I feel like I’m on the launch pad and we’re at T-minus 10 seconds,” Dan Calzaretta told his staff during this circle time.

As the school’s executive director, Calzaretta knows every detail already nailed down and those still awaiting the hammer.

Completing that task will take time, he acknowledged.

“The opening and running of a school is always an evolving process,” he said. “When the kids come, we can start crafting to their specific needs.”

By the time the staff meeting ends in a group cheer, many thoughts and happy moments have been shared.

That’s par for Willow’s very different course, said Director of Culture Katie Christianson, during a tour of the facility afterward.

Some differences jump to the front of the class. The charter school students — Willow staff refer to them as“scholars” — will wear uniforms of navy blue tops and khaki or black bottoms.

The decision to require uniforms in the dress code was multi-layered, Christianson said.

It began with the parents enrolling their children over the past five months, who said loud and clear they were looking for comfort, ease and low cost. Thus the uniform can be as simple as a navy-blue polo or T-shirt and pants with a zipper and waistband. No open-toed shoes are allowed, and that’s because Willow kids will spend their days in different environments and activities, she said.

Selling the idea to students turned out to be pretty easy, Calzaretta said.

“Sports teams wear uniforms, and we asked if (students) knew why. ‘So that they know each other and everyone has the same purpose.’ So this idea brings our team around to our same purpose.”

Once they arrive in uniform, students and staff will eat from-scratch breakfasts and lunches cooked on site in the church fellowship hall, using local, fresh food as much as possible prepared by Willow employees.

The school’s daily schedule looks different, too. After breakfast ends at 8:25 a.m., classes start at 8:30 a.m. and won’t end until 4:15 p.m. That said, the first 30 minutes will be spent in small-group huddles called “Crew,” a technique meant to build community and ward off conflict, Calzaretta said.

“To make sure we’re all rowing in the same direction,” he said.

After a morning of core classes, students will have 45 minutes for lunch and later get a 15-minute “mindfulness” break that can include exercise, meditation and conversation, Christianson said.

“It’s all meant to bring mind and body back into alignment,” she said.

Willow has saved schedule dessert for the end of the day. That’s when it’s time for an hour of “mandatory fun,” a potpourri of activities that will span martial arts, woodworking, yoga, computer coding and more.

The school will pull in knowledgeable folks from the community to give students exposure to a multitude of hobbies and skills, Calzaretta and Christianson said.

Willow is Washington state’s only rural charter school out of the dozen open so far. Most are in the Seattle area and two are in Spokane.

Being separated by geography and availability of resources means Willow lacks access to some supply and service vendors, and opportunities for students. For example, there will be no visits to city aquariums for a science lesson.

Walla Walla makes up for that, however, according to Calzaretta.

“On the plus side, everyone knows each other and everyone is super supportive of education. And that’s something Seattle doesn’t have,” he said.

Calzaretta said he meets with other public school leaders to discuss education, including project-based learning and student transition to and from Willow, and he appreciates those open doors that come from being in a close-knit education network.

Willow’s starting point for students this year will be to highlight the importance of such relationships. The first week of the school year will see the students meeting at Walla Walla Community College, where they will work in small groups to start making connections with each other and the community, Christianson said.

“That’s the biggest hurdle for a lot of our scholars, to know people and make connections,” she said. “This is basically going to be leadership camp for every kid, and it’s dramatically different than everything they’ve known and what they could have expected in middle school.”

“For the first time in their lives, they will be empowered in the education process,” he said. “School will no longer be something that’s done to them.”