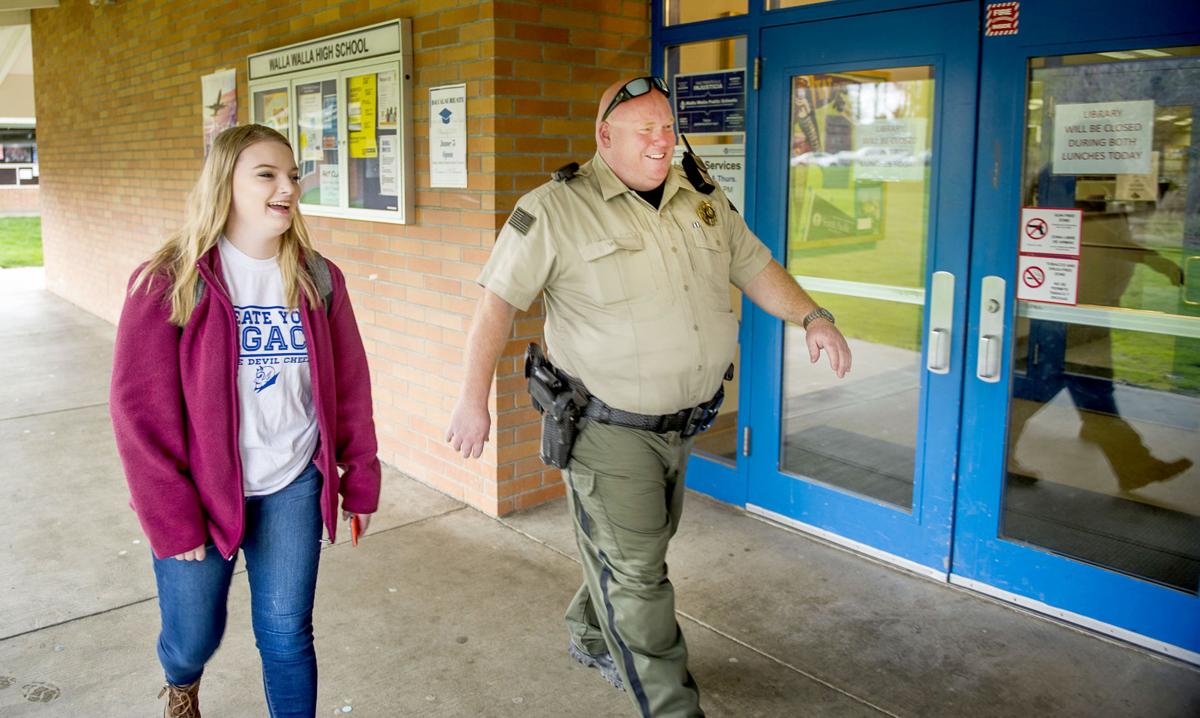 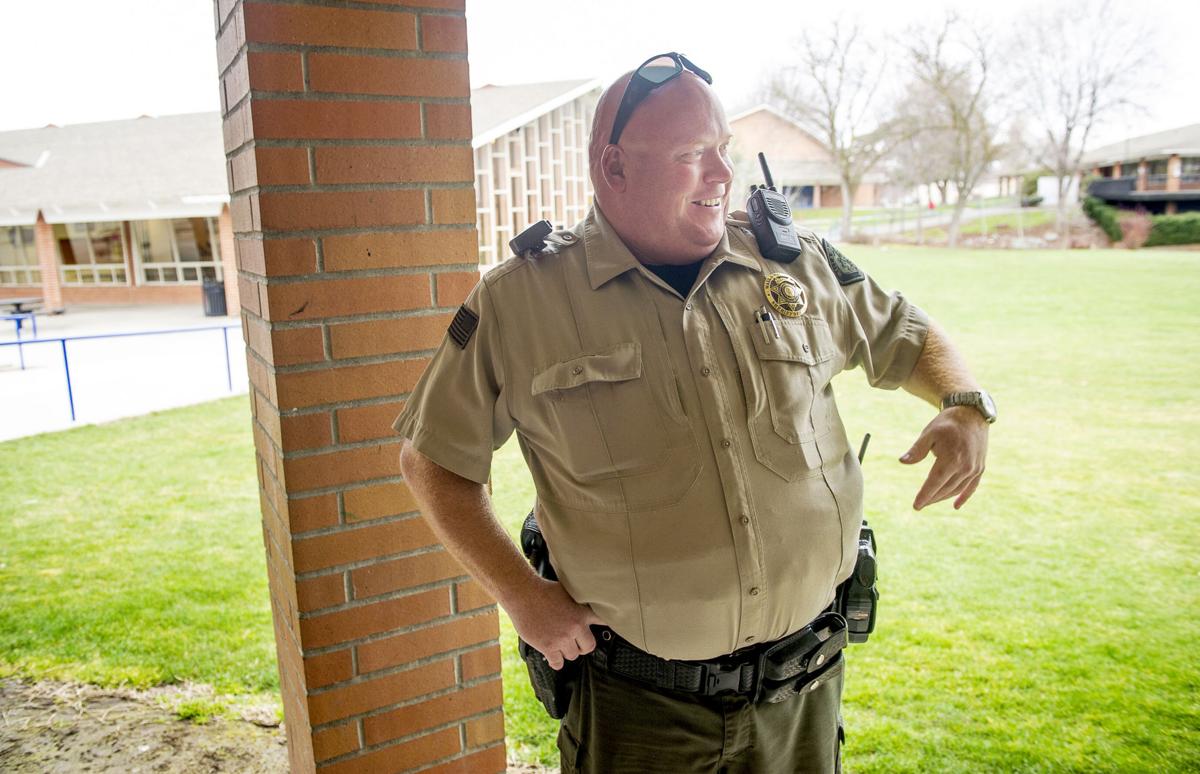 Deputy Ian Edwards has been on his beat on the Walla Walla High School campus for nearly a year. Edwards said he is grateful for the relationships he’s started developing with staff and students. 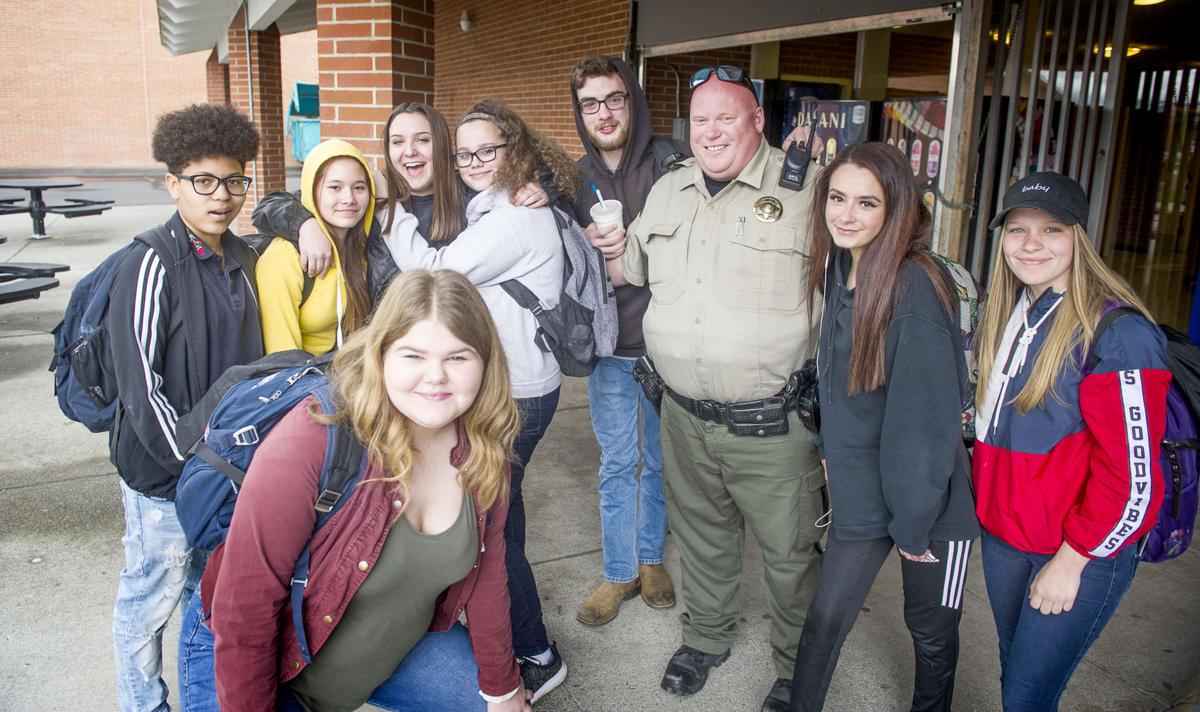 Deputy Ian Edwards said his good relationships with students at Walla Walla High School help him do his job better. “I’m not out to get kids, at all, but they know when something criminal happens, I’m here to enforce the law. Even if the school says they don’t want to take action, I have to.”

Deputy Ian Edwards has been on his beat on the Walla Walla High School campus for nearly a year. Edwards said he is grateful for the relationships he’s started developing with staff and students.

Deputy Ian Edwards said his good relationships with students at Walla Walla High School help him do his job better. “I’m not out to get kids, at all, but they know when something criminal happens, I’m here to enforce the law. Even if the school says they don’t want to take action, I have to.”

Edwards, a deputy with Walla Walla County Sheriff’s Office, smiled and gestured to the plastic jack o’lantern that sat grinning out of season.

“See? I told you they all know I have candy,” he told a reporter, noting he spends about $50 a month of his own money on candy as three more students hit Edwards up.

“It brings the kids in, and they can get comfortable with me.”

His entire gig as a school resource officer is a sweet deal, in Edwards’ opinion.

“I’ve kind of wanted this for a long time, after being a DARE officer … I like to be around people,” he said with a smile. “I’m a talker.”

Edwards was hired as a Walla Walla County deputy in 2004 and began the school resource officer position in September 2018. He is stationed at the high school daily to provide a law enforcement presence, campus security assistance and safety for everyone.

The tasks associated with those goals run the gamut, he said.

Sometimes it means helping administrators try to control student misbehaviors such as vaping, which is an “out-of-control” problem at the high school, the deputy said.

Not long after the bell rings, Edwards is pulled into working with Assistant Principal Jack Mehn over “a misunderstanding” — as in, one boy thought a pair of ear buds left behind in a classroom must have been abandoned and therefore eligible for resale. The real owner disagreed with the presumption.

“It was a dumb kid move,” Edwards said upon returning to his office near the main administration area. “But should he be jailed for that?”

Instead the teen’s father was called to Wa-Hi to talk to his son, which visibly shook the student and was the best answer to the problem, Edwards said.

“Parents are key players, they have to be.”

Besides dealing with students veering into criminal behavior, Edwards stays on alert for any form of danger coming onto the campus, which he describes as a “security nightmare.”

There is no arguing the Wa-Hi campus is beautiful. The high school was built in 1963 on a college architectural model, thus boasting expansive green spaces, a running creek and 11 stand-alone brick buildings.

To protect students and staff on the 60 acres of campus requires vigilance and hourly collaboration with the three security guards employed by the Walla Walla School District.

The security team has a somewhat different but equally important job, Edwards said.

“They’re the guys who get the kids out of classes. They can look for vaping equipment. As a cop, I can’t go pull out a student for something unless it’s criminal. I can’t just go through a backpack. Even though I am here, I still have to follow law enforcement rules.”

While the work of Wa-Hi’s safety team is mostly invisible to the general public, it is far from unnoticed, said Principal Ron Higgins.

Security people get to know who should be leaving campus, like for the Running Start program located at Walla Walla Community College, and who shouldn’t be headed off, Higgins said.

“And who isn’t supposed to be here.”

The security officers, who work in shifts, interact with teens all day long, which helps Higgins with his goal for students to feel they have a trusted adult to turn to with a concern while at school. It also helps perception — the presence of security staff doesn’t always mean trouble, he said.

Some safety situations are propelled by student actions, and some by nature’s.

“We had a swarm of bees the other day. None of the students who passed by it noticed, but one of the security guys noticed. It was a thousand bees,” Higgins said, noting the discovery called for a beekeeper, who was able to safely remove the unauthorized visitors.

A student resource officer is not on campus to be a law enforcement presence or keep kids in line, so to speak, said Scott Brashear, who did Edwards’ job for 15 years and now works a security position at Wa-Hi.

“We’re here to protect, to protect schools from school shootings.”

He and others are also in place to form the kind of relationships that gets students into their classes and on the way to success, Brashear said.

“Some kids rely on Ian and us to be the stable part of their lives.”

“We’re here to help kids through the journey. I see kids who didn’t want anything with you as freshman, then as seniors they are very friendly.”

Edwards is expecting to grow those same kinds of connections.

“I’m an informal counselor. I like to be visible during (class) pass-throughs and then at lunch, talking to kids, listening for any self-harm or depressive statements. I have a lot of students who tell me things.”

And then there are things teens would rather stay hidden.

Well before lunch, Edwards was alerted to a teacher’s report of a student smelling strongly of marijuana and “eating chips like crazy.”

When the girl who reeked of reefer reached the office via a security officer, there was no evidence of pot use in her backpack.

She did, however, have vaping products with her, Edwards noted, after emerging from a discussion with the student.

“So the school has a zero-tolerance policy. They will make a call home to the parent or guardian.”

In the meantime Edwards’ printer spits out a citation, which he can only give if he is witnesses to an infraction, the deputy said.

He heads behind closed doors to give it to the student.

Although unseen, her cry of angst reverberated through Wa-Hi’s office area.

“I’m a criminal now,” she exclaimed.

“No, you are not,” Edwards said firmly.

“Am I still allowed to get candy?” the girl could be heard asking.

“Of course you can,” he replied.

And that’s how he rolls, Edwards said, as he left the scene to stroll the campus again on this morning.

“At Wa-Hi, I’ve officially had to talk to two, three percent of the kids. Other kids, probably a couple of hundred, we’ve talked about mental health stuff. But 80 percent of the students I see when I am showing up to their choir, their band concerts, or at their games. That’s part of my personality.”

Need seen for state to boost funding for student safety