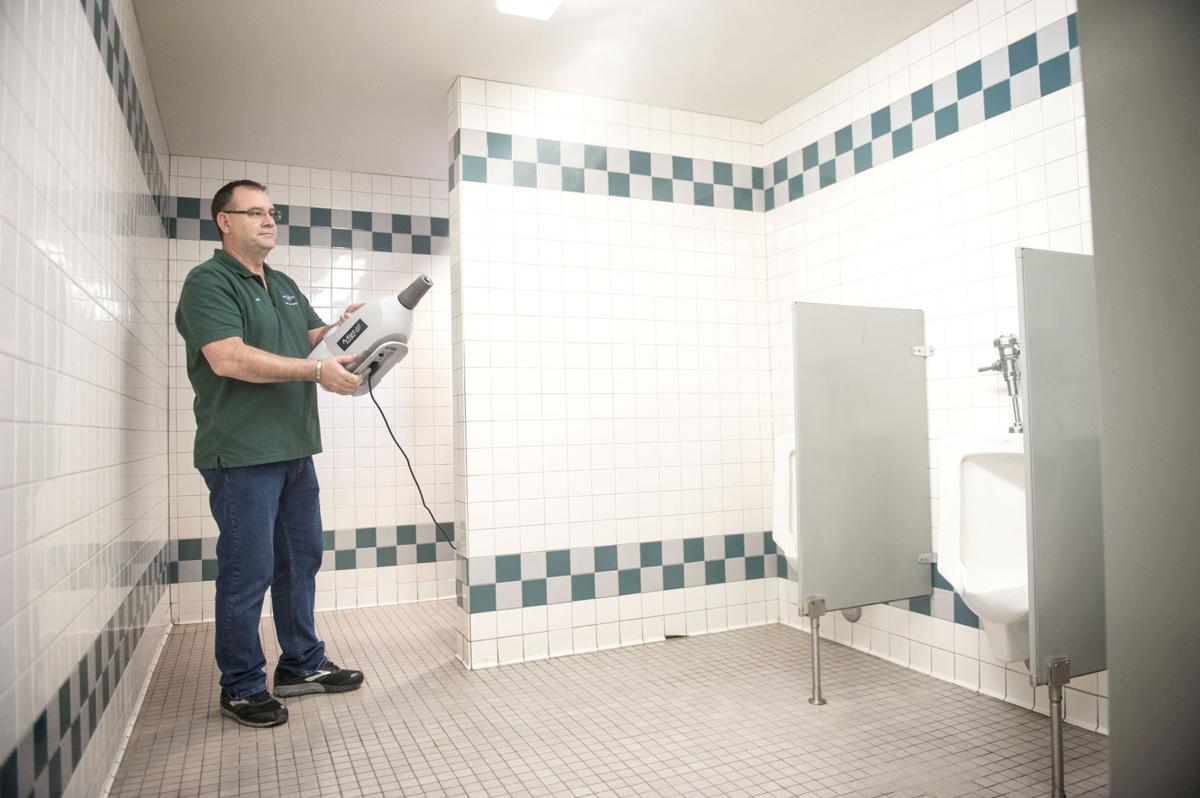 Green Park Elementary custodian Russ White uses a Mist Sprayer/Blower to disinfect one of the bathrooms at the school. 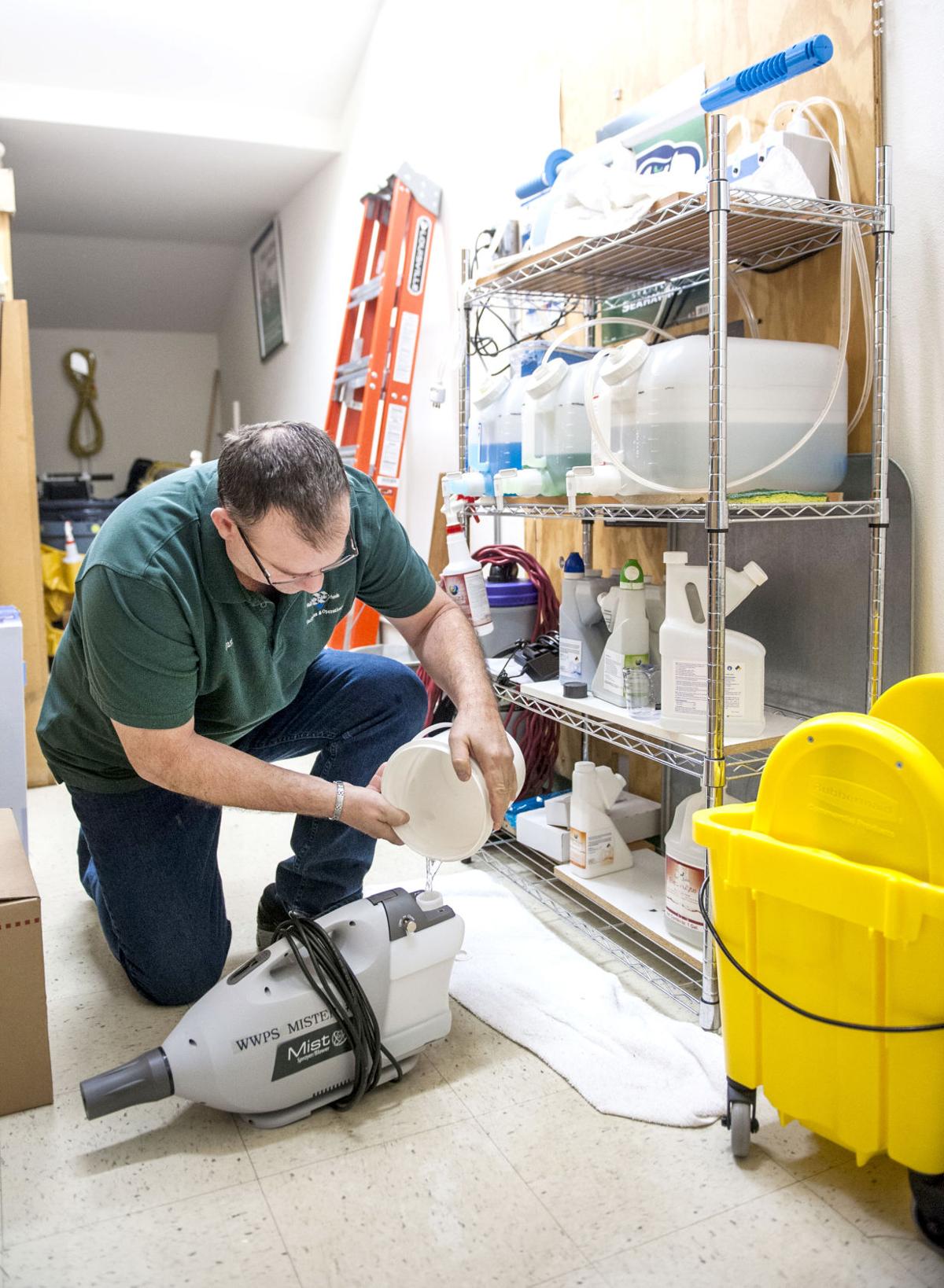 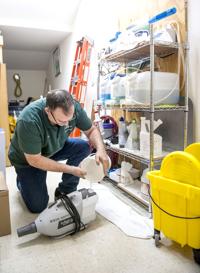 Green Park Elementary custodian Russ White uses a Mist Sprayer/Blower to disinfect one of the bathrooms at the school.

John Pemberton had a gleam in his eye as he raised a bottle of cleaning solution to his lips, then sprayed a couple of times into his mouth.

With healthier students comes better school attendance, a topic of intense focus for every education official across the country. When children are not in class, children can’t learn, experts say.

But an army of custodians here now have new ammunition against the flu, cold and intestinal viruses that can lay students and staff low, said Pemberton, custodial supervisor for the school district.

It’s called GenEon Technologies and it’s a different concept in commercial cleaning. Gone are the chemical cleaning sprays long used by Walla Walla Public Schools — and most other districts around the nation. In the place of bottles upon bottles of toxic potions stored in schools is a “green technology” process for safer and far more efficient cleaning, Kay said.

And it looks much more like magic than science.

The quest for better ways to keep school buildings here healthier began last flu season when a school in Tri-Cities experienced a building-wide outbreak of the virus. Staff there came in on the weekend to wipe every surface down, Kay recalled.

That started a conversation about how Walla Walla public schools got disinfected.

“We wanted to make sure we weren’t contributing to the problem,” he added.

Virex, a broad spectrum disinfectant, has been the standard in most medical, educational and commercial institutions, Kay said. Like others in its class, the product requires spraying, waiting 10 minutes for Virex to kill germs, then wiping away.

Except no one uses it like that, Kay and Pemberton agreed.

For starters, leaving a chemical on a surface is not a great idea in spaces that hold children. Even when antibacterials are sprayed after students are gone, no one has that kind of time to wait and wipe while there is an entire school to clean. As well, that doesn’t include the time it takes to keep high-touch areas like drinking fountains and bathroom doors sanitized several times a day, they said.

The Texas-based GenEon Technologies company provided the game changer the two employees were looking for.

Charging ahead through science

The science behind the product was developed in 1839 when British scientist Michael Faraday discovered the principles of electrolysis, the chemical decomposition produced when an electric current goes through liquid or solution containing ions. Basically, it’s the scientific way of splitting substances on demand, said John Shanahan, who cofounded GenEon Technologies more than six years ago and now serves as vice president of sales and marketing.

In the case of his cleaning products, electric current goes through a heavily-salted liquid to create a saline solution with the sanitizing properties of chlorine bleach, but far more effective and without the negative side effects, Shanahan pointed out.

“It doesn’t take the color out of fabrics or carpet, it doesn’t burn your eyes or discolor your hair. And it doesn’t make people sick.”

Which is why Pemberton can sip a spritz whenever he has a mind to, like when he recently demonstrated the safety of the solution in front of the Walla Walla Public Schools school board by doing just that.

When the electrolyzed solution hits the germ cell wall, the organism absorbs the foreign invader, which destroys most germs in under 60 seconds. The kill list includes noroviruses, Listeria, E. coli, Staphylococcus bacteria, Salmonella, and more, according to the company.

In 2016, the company was awarded an Environmental Protection Agency registration for its on-site system that allows institutions like WWPS to create their own cleaning solutions in place by using the electrolysis technology and packets of minerals.

Getting federal approval took years of work and about $500,000, Shanahan noted.

“It’s very hard to get. It takes very specific testing and science to get that registration number. But it was worth it.”

Shanahan’s team has been able to reduce the size of the earlier equipment, down from the size of a side-by-side refrigerator to that of a Keurig coffee maker. That’s had a far-reaching effect, including use of the saline solution in misters the size of a hand vacuum that can sanitize large areas in minutes.

“We can disinfect a 30-foot bus in five minutes,” Pemberton said. “I can stand at the front and the mist will hit the back of the bus. We can go into a classroom and disinfect the whole thing … we can go anywhere. Everything the droplets hit, the bacteria sucks it in and it’s dead.”

Before this technology was available school buses were not routinely sanitized, Shanahan pointed out.

“We say a bus is nothing more than a germ incubator with tires.”

The school district uses the new cleaning system in all its elementary schools, Kay said, and plans call for it to be introduced in the middle and high schools once bond renovations are completed.

While GenEon sells to all kinds of facilities including hospitals and big entertainment venues, the company is particularly proud its product and equipment — that includes charging wands that can electrolyze buckets of mop water — in 1,300 school districts across the United States, numerous colleges and “all 44 million square-feet of West Point,” Shanahan said.

GenEon calls that “On-Site Generation” technology, made feasible because the minerals solutions are not toxic to people, pets or plants and because the smaller equipment brings the technology to the space where it will be used.

“We’ve done studies with three of our top schools, and in the 2017-2018 school year, zero of them closed because of the flu,” Shanahan said.

“But more than 931 schools using traditional chemicals closed for a total of four combined weeks during the highest flu outbreak in 10 years.”

Kay and Pemberton have seen proof pathogens are perishing under the new cleaning system, they say.

When GenEon sent salesman Rob Dahl to present the system, Dahl swabbed the push button on a drinking fountain at a local elementary school, then put the swab in a meter. That allowed him to measure the numbers of energy molecules found in every living organism.

“Anything under 200 is considered clean,” Pemberton said. “And we prefer those numbers to be under 100.”

That fountain came in at just under 1,000 that day, he said, his eyebrows raised in memory.

“Drinking fountains were worse than the bathrooms.”

Dahl spayed on a GenEon product, wiped it away, and got a reading in the mid-300s. Use of the company’s sanitizer put a third reading at 10 molecules.

And then Dahl sprayed his tongue with the solution. It is, after all, chemical-free, food grade hygienics, Kay said.

More than 30 WWPS custodians are using the system and “love it,” Pemberton said.

Testing high-contact surfaces at schools for bacteria has become part of the supervisor’s routine.

“The guys see me coming, they know exactly what I am doing there,” he said. “They really want to see what their numbers are. This swab gives their work validation.”

Kay said he does not yet know what the annual tab for using the new system will pencil out to, but suspects costs will be lower. Shanahan said most school districts using GenEon cut cleaning costs by 40 to 60 percent.

School custodians are the right people to put on the front lines of germ warfare, he added.

In the past custodians would be limited to a spray bottle and a rag, trying to physically wipe down every touch point in a classroom. Now they can have the right tools for the battle, Shanahan said.

Kay said he expects future data to show fewer Walla Walla children missing school due to illness. While a cleaning system generally goes unnoticed by most, those numbers will capture everyone’s attention, he added.

Join us for the online premiere of Secret Life of the Forest: The Northern Blue Mountains. Read more