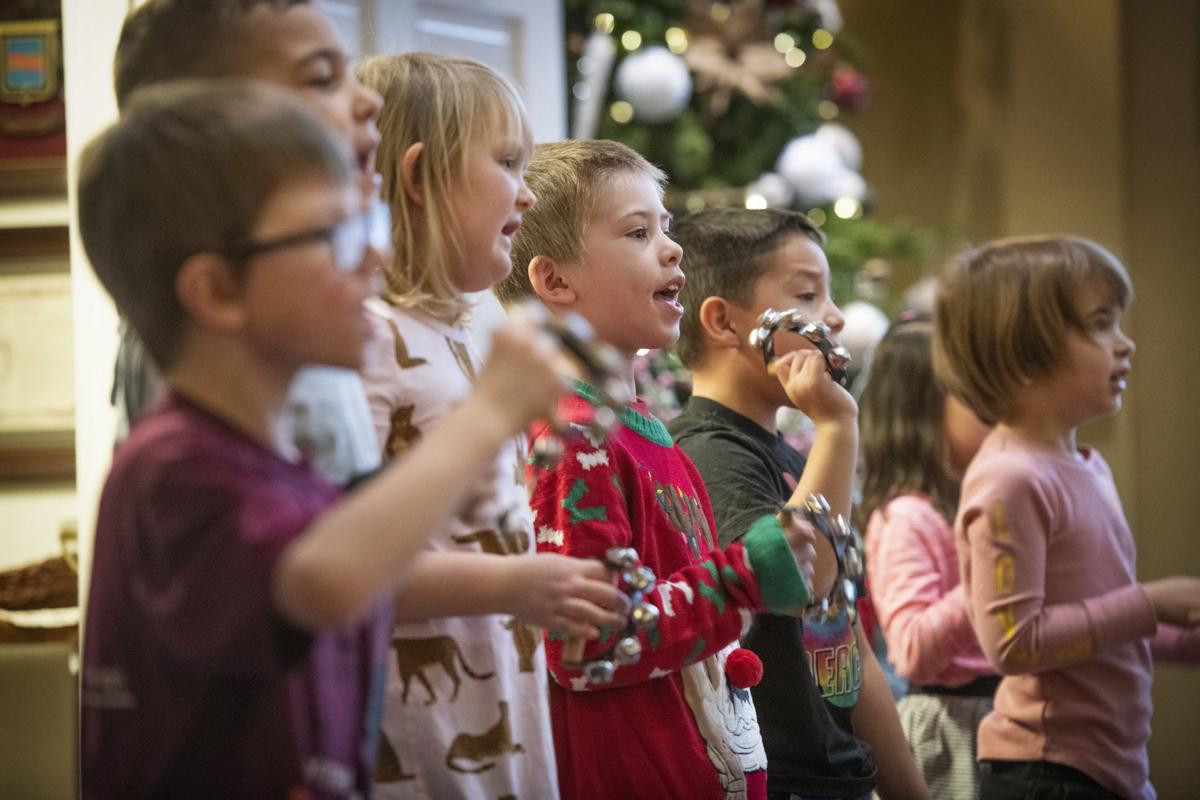 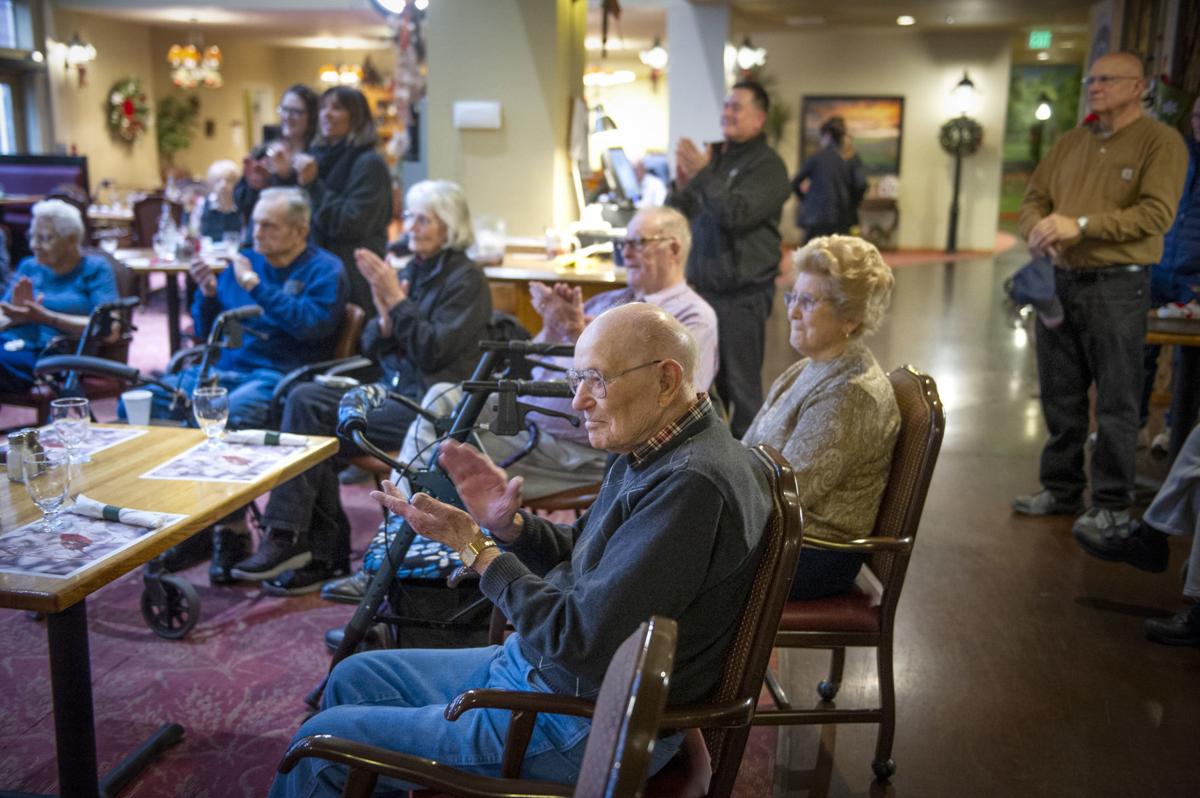 Residents and visitors show their appreciation during a concert by Touchet grade-schoolers at Wheatland Village on Wednesday morning. 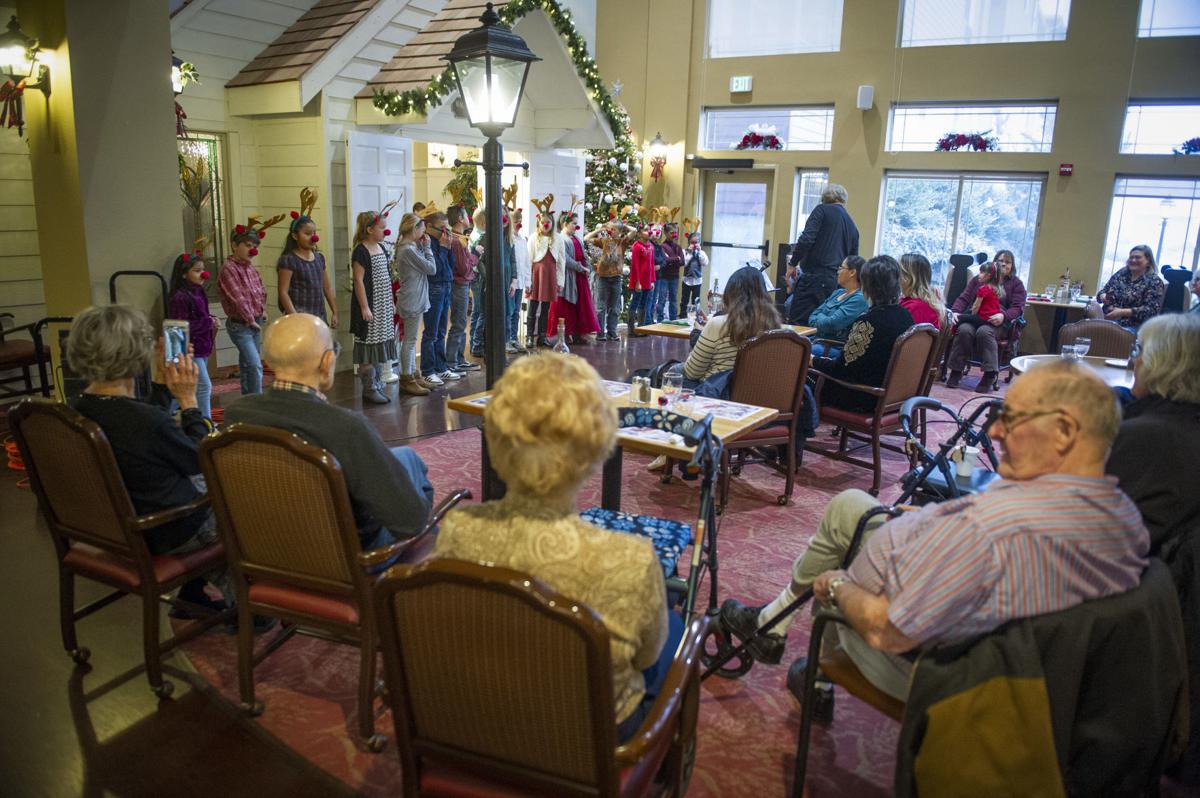 Touchet third-graders break out the red noses and antlers for a rendition of “The Reindeer Pokey.” 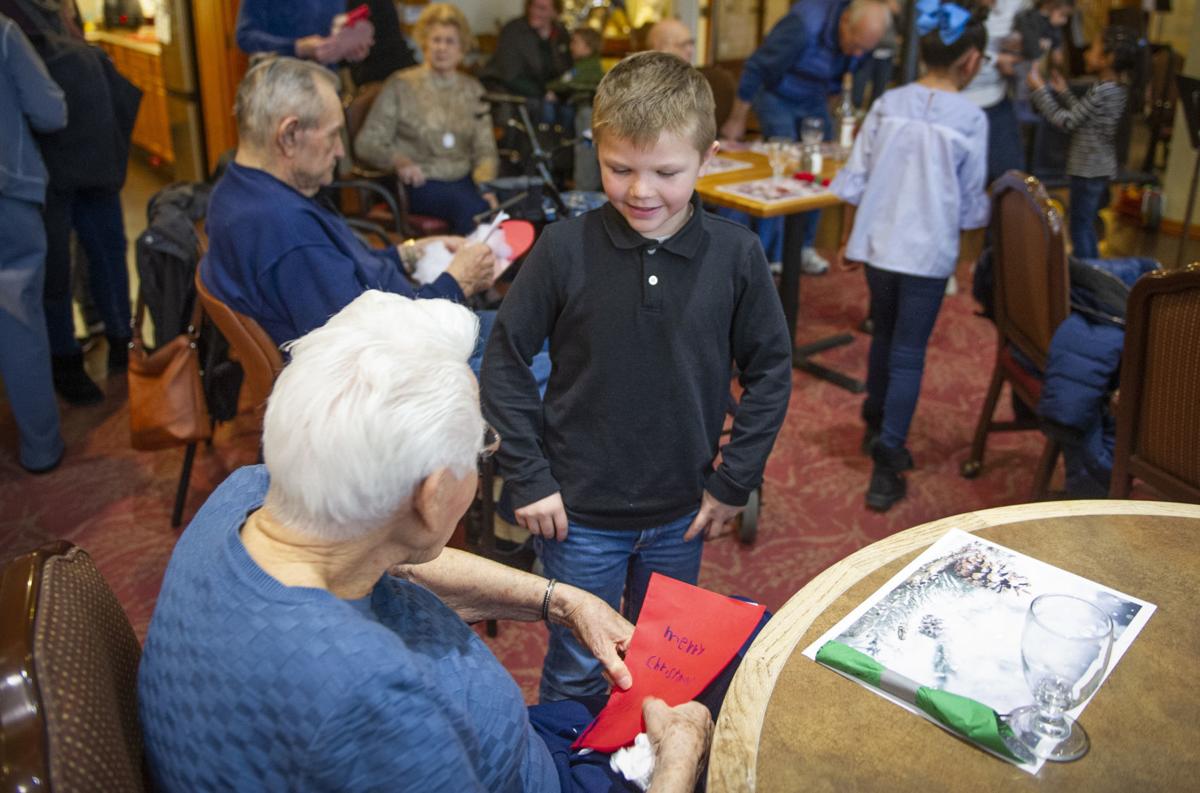 Third-grader Seth Rosenlund gives a handmade card to Esther Castle after a musical morning at the retirement community. All the 80 or so children passed out cards to Wheatland residents. 12-18-19 Lehman Photo

Residents and visitors show their appreciation during a concert by Touchet grade-schoolers at Wheatland Village on Wednesday morning.

Touchet third-graders break out the red noses and antlers for a rendition of “The Reindeer Pokey.”

Third-grader Seth Rosenlund gives a handmade card to Esther Castle after a musical morning at the retirement community. All the 80 or so children passed out cards to Wheatland residents. 12-18-19 Lehman Photo

It was free, too, other than the easy labor of dozens of smiles and boisterous applause.

Bracketed by teachers and para-educators, about 80 kindergartners through fourth-graders from Touchet Elementary School arrived at the retirement community just before 9 a.m. Their mission? To present a holiday concert for an audience of Wheatland residents and their own family members.

Although the sky outside was the color of aged steel and the air heavy-laden with frost, the dining area of the main building was cheery and warm, then made absolutely festive as the incoming children grinned and waved at parents, grandparents and siblings sitting nearby.

Sonny Elsasser, the district’s all-things-musical director, warmed up the breakfast crowd with a comedic patter, an ebullient cross between Lawrence Welk and a Las Vegas emcee.

“Are they treating you well here?” he asked as he peered at his surroundings.

“This place is nice.”

The youngest came first. In a blur of sparkle, bows, new shoes and one suit jacket, the tykes hesitantly began a somewhat subdued “Little Snowflake.”

With prompting by kindergarten teacher Kathy Warner to “give it some bounce,” the class responded with a lively rendition of “Peppermint Candy Cane,” while those watching grinned in return.

Then it the first-graders’ turn.

“They were getting coffee, now they’re coming back,” Elsasser joked.

Lighthearted as the atmosphere was, when the class did the classic “Jingle Bells” and shook bunches of, well, jingle bells, a shadow of memories passed over many a listener’s face.

Elsasser coached this group in a hands-held stage bow, then welcomed the second-graders with their holiday take on the extremely popular “Baby Shark” song.

In case anyone was unaware of the children’s song, the music director sang a few bars of the ditty about a family of sharks, which gained extra fame at this year’s World Series via the Washington Nationals baseball team.

“Baby Christmas Tree” was, indeed, a close relation to the children’s song as the singers bopped their way through it.

The third-grade students, calm with a rock-back-on-heels confidence, clasped hands behind their backs and let loose with a harmonized “Santa Claus is Coming to Town” before donning antlers and Rudolph noses for “The Reindeer Pokey” as Elsasser quipped,”OK, don’t look, they’re changing costumes.”

In no time, fourth-grade kids were earnestly piping out songs on recorders, not allowing their gaze to break from the sheet music before them.

Their pitch was nearly perfect, not an errant squeak to be heard, and everyone finished at the same moment on “All Through the Night.”

With one final “We Wish You a Merry Christmas” as a whole choir, all the musicians dispersed to pass out handmade cards to folks.

“I’m so thrilled. I think these children … they are talented and enthusiastic.”

Esther Castle, who said she taught school in the Yakima Valley for her entire career and even in retirement, agreed.

“This is good for the kids, they are so cute,” she said as Seth Rosenlund gave her a construction-paper card and said “Merry Christmas.”

Most of the residents here love when children are in the house, Castle noted.

Overall, the presentation felt like a success with everyone involved, said Touchet’s third-grade teacher, Teri Lesmeister.

A Touchet teacher for 31 years, Lesmeister had organized the outing. It was once a regular feature at this time of year for the school, and these kinds of activities set a tone of community service, she said.

“The children have been learning about character traits like compassion and caring and respect. We’re trying to connect those to this trip.”

Later Wednesday, Lesmeister said the students had been asked to do one more song at the facility’s memory care area before heading back to school.

“We were invited back next year, as well,” she said.