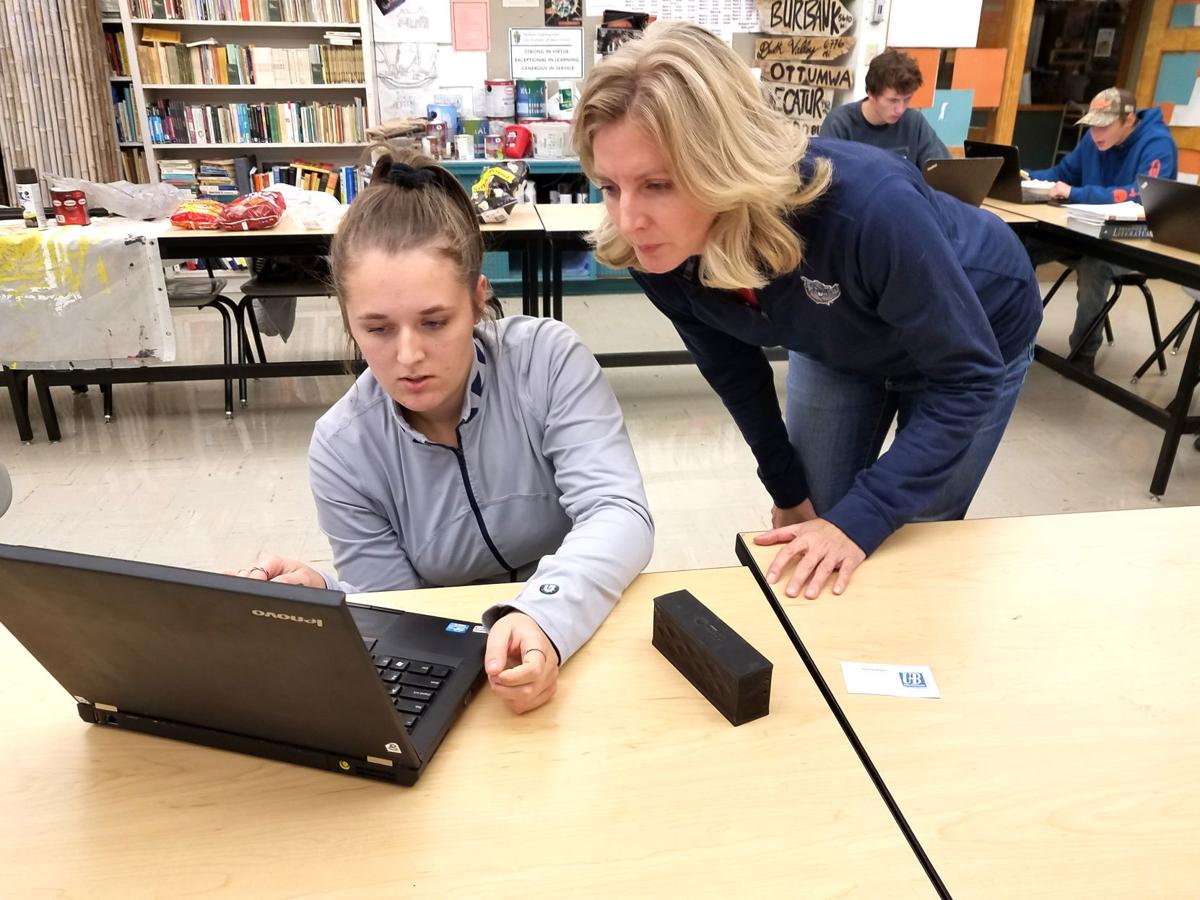 Natalie Brinson is planning to major in education or nursing in college, once she can get all the forms filled out, the DeSales Catholic High School senior said. Counselor Kathy Ruthven, right, set up sessions this fall to bring seniors together to tackle the monumental task of applying for college. 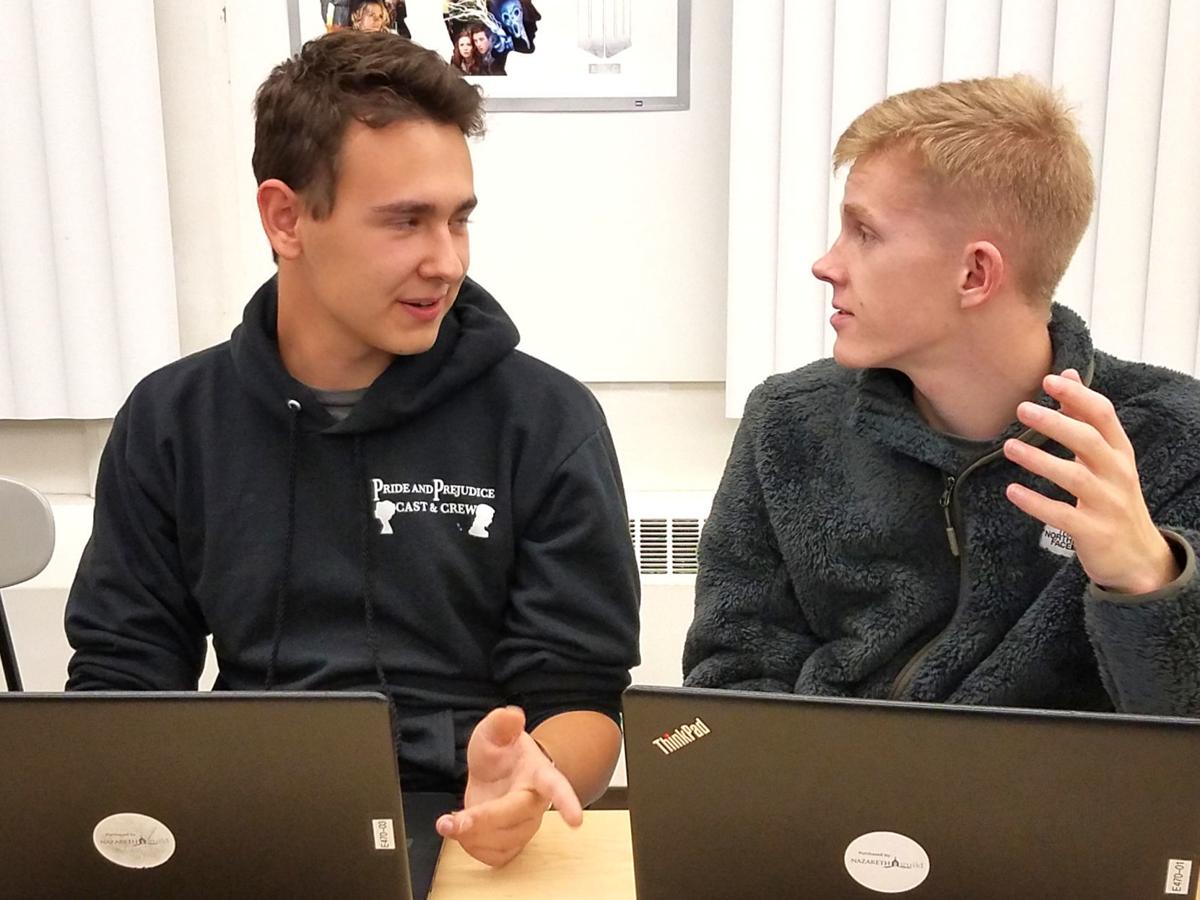 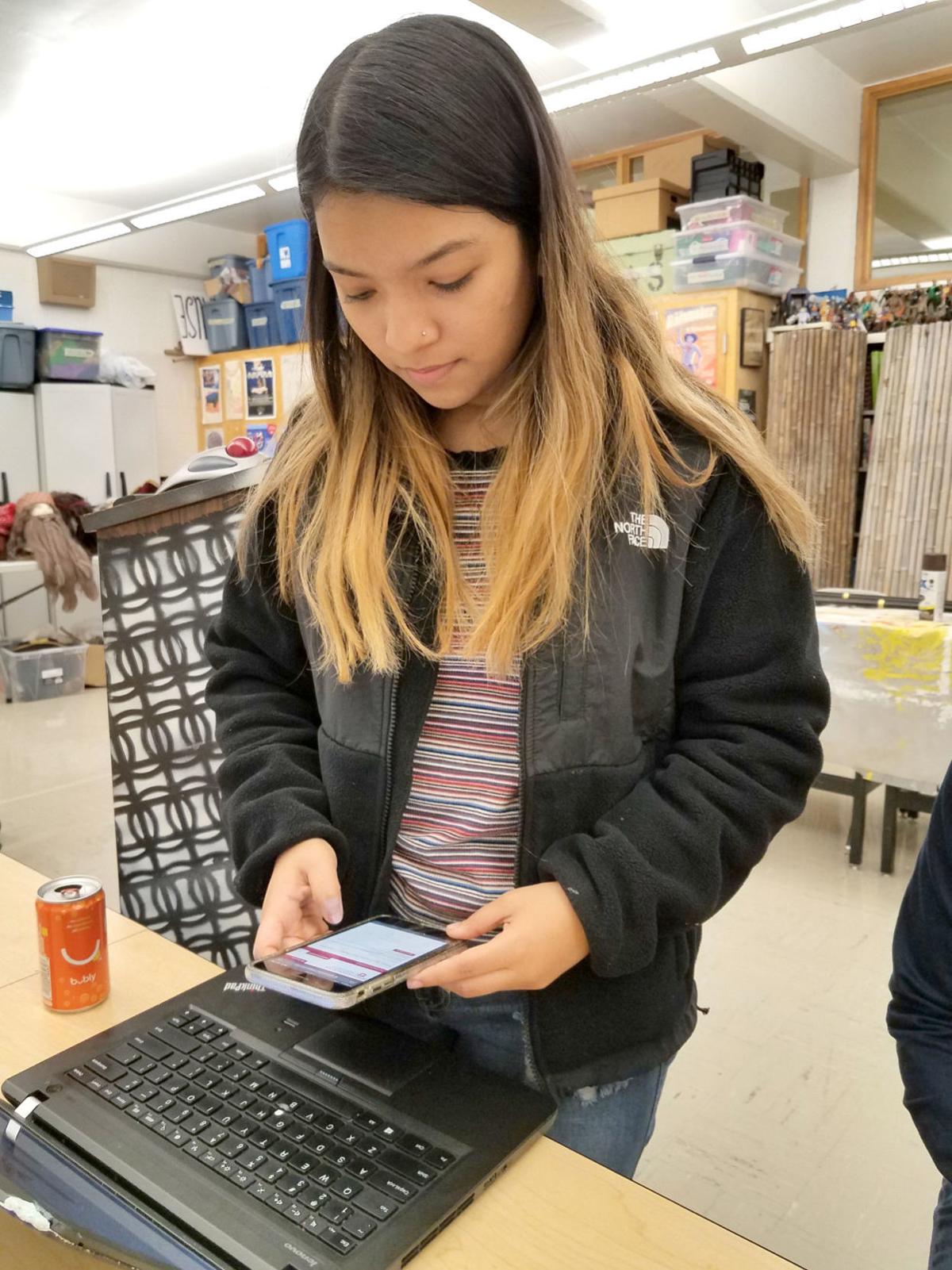 Wendy Vargas tries to sync up her “Common App” information between her phone and online. The universal application program has a few glitches, Vargas said.

Natalie Brinson is planning to major in education or nursing in college, once she can get all the forms filled out, the DeSales Catholic High School senior said. Counselor Kathy Ruthven, right, set up sessions this fall to bring seniors together to tackle the monumental task of applying for college.

Wendy Vargas tries to sync up her “Common App” information between her phone and online. The universal application program has a few glitches, Vargas said.

Even if it was a cold, rainy night and no one had to actually be at the school — here was a chance to link arms for one of the toughest hurdles high school seniors face.

Ruthven has been a teacher and counselor at the school for 25 years. Among other duties, she guides Desales seniors toward the finish line, meeting with them individually to conquer all the requirements of applying for college.

Two years ago, it occurred to Ruthven she could support and facilitate seniors in a group setting, as well as the one-on-one work she was already doing.

The resulting workshops are a “shared pain” plan that gathers seniors together to move forward on the task.

“But this is a tiny bit more fun than sitting in front of your own computer at home.”

Every current senior at DeSales is already busy, seemingly trying to squeeze the last ounce out of the high school experience, Ruthven noted.

“All these kids are involved in sports or drama or both,” she said, noting that doesn’t count the part time jobs and other activities between them.

Add to that, getting to college is “absolutely” more complicated than ever, the counselor said.

There are essays to write, college applications to fill out, student portals to navigate, financial aid paperwork and scholarships to apply for. And deadlines for it all.

Even things designed to streamline the process add another layer, Ruthven pointed out.

Take the “Common App,” a nonprofit program that allows students to fill out one application and send it to multiple schools. The organization says it works with nearly 900 institutions of higher learning.

“It seems very helpful,” Ruthven said with a lift of her brow, “but each college has individual needs, extra rules and separate deadlines.”

The counselor has also seen a trend developing to apply more broadly geographically.

“And to have a lot of options,” she said.

Indeed, on this night there are about 50 colleges on the table, with one student applying to 18 of them.

Parents who had their own college experience are often out of their depth now, given how much getting into school has changed, Ruthven said.

“Many parents went to their state school. It was closest and it was easiest. But now there are so many options that looks so flashy and appealing.”

Even she struggles to keep up with changing demands in the paperwork, the counselor conceded.

In the end, however, a student who is able to take ownership of getting to college is the one most likely to do well there, Ruthven pointed out.

“This is not the parent’s job, and the least successful kid is the one whose parents manage this for them. If you really want to do this, you have to learn to navigate, to follow through, to check email.”

The students present this night — there are typically about 13 that come to the workshops — are counting on Ruthven to show them that map.

He sees these sessions as a gift, Garrett Buffington said.

“I feel like it gives us time to explore options online, to see where we can fit in.”

He and his peers are working on their own forms, but as a group, they also offer suggestions for scholarships to try for and essay ideas to consider, Garrett said.

Bailey Lesko — his dad is the principal, he said with a smile — is applying to five colleges. So far, he’s found the quest for scholarships confusing, Bailey said.

Having Ruthven closeby gives him confidence to ask questions and sound out better phrasing. Getting scholarships is tantamount to someday earning the medical degree he seeks, he said.

Peering intently at her laptop, Natalie Brinson was working her way through the Common App process, which she called “never ending.”

Of the four colleges she’s applying to, only Gonzaga University accepts it, Natalie said.

“I’ll have to fill out three other applications for schools. ... I end up having to ask Mrs. Ruthven a lot of questions. It’s useful to have her experience.”

The whole thing is less scary inside the DeSales classroom rather than inside her own head, Wendy Vargas said,

“It’s overwhelming. This is a confidence booster and a comfort,” Wendy said as she tried to get her Common App information to sync between phone and computer.

Thanks to Ruthven’s guidance, Dawson Neely said he has scrapped his personal statement for his application to Georgetown University in Washington, D. C., three times now.

But that’s progress and it’s because of the group setting, he emphasized.

“I really enjoy the fact it makes you do something. I can stare at a blank document for hours alone. It makes it a lot harder to not get things done.”

Ruthven said that she anticipates one more work session in January, about the time scholarships are opening up.

DeSales principal John Lesko called Ruthven selfless in her devotion to the cause, and said her willingness to advocate for each student speaks of her investment.

On Monday Ruthven said since that work session many of her students have received acceptance letters.

“So that’s a measure of success.”