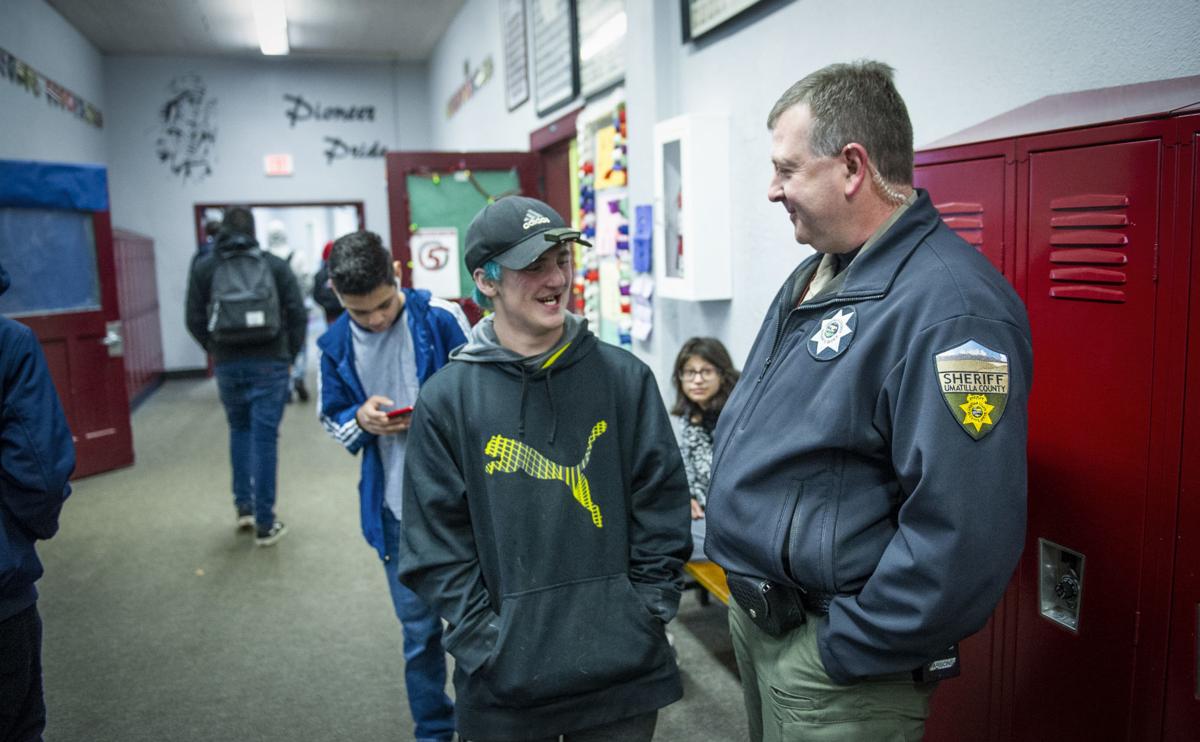 Darrin Parsons chats with students at McLoughlin High School between classes recently. While Parsons spends much of his time at Mac-Hi, he also does safety work at the district’s other schools. 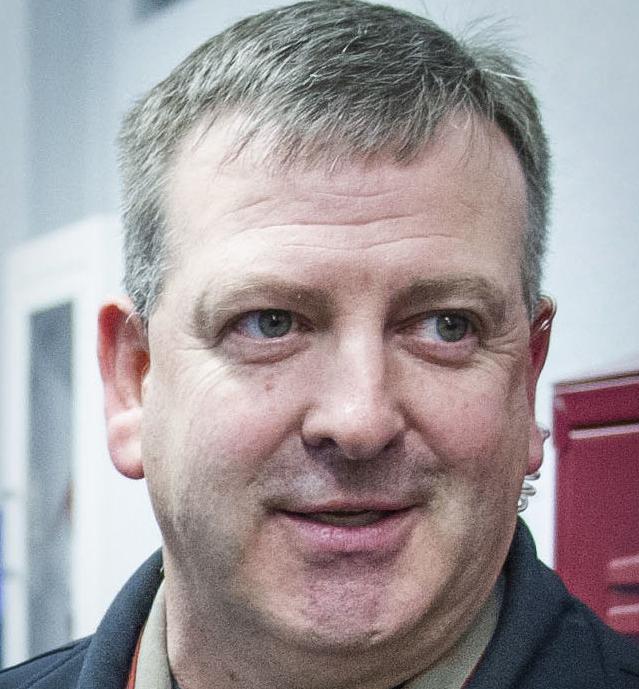 Parsons has worked in law enforcement for 20-plus years — much of that with Umatilla County Sheriff’s Office — but time outside of the job has included coaching youth sports, volunteering with the faith-based Young Life youth organization and parenting four children at home in Pendleton.

“I have always liked working with kids, I enjoy it,” the deputy said.

So when Umatilla County Sheriff Terry Rowan asked Parsons if he would like to work as a school resource officer for the Milton-Freewater Unified School District, Parsons was happy to jump into the position, despite a daily commute of about 70 miles to and fro.

“I think I’ve always just wanted to do this,” Parsons said with a grin that comes easy and often.

The gig started in October, filling a hole the district had left vacant for at least 15 years.

Having an armed officer on campus is becoming more necessary for school districts across the nation, said Superintendent Aaron Duff.

“It’s not just about school violence … it’s about preventative things. It’s about officers being able to identify things, a student being able to share something with an officer that they can’t share with another person.”

Although his district’s emphasis is on the positives, there’s no going around some basic truths, Duff said.

“With an issue like smoking or vaping, if you have someone with a badge who can write a ticket, that brings it to a whole new level.”

A resource officer on duty is similar to knowing a police officer is parked on the highway in the same location every day, he said.

“You slow down at that spot, don’t you? You know when someone is there to help you make good decisions.”

The Milton-Freewater school board and budget committee identified the need to employ a trained, certified officer, and devoted about $100,000 a year in the budget to do so. That covers vehicle use, specialized training and Parsons’ presence at some extracurricular events, Duff said, adding he doesn’t anticipate using all the allocated funding.

“It’s a great example of public agencies working together … Sheriff Rowan has someone available in the summer, or he can pull Darrin out if he needs him.”

When the district asked the community to pass a bond in 2016, parents and others were adamant that student safety be high priority, despite the raise in property taxes a “yes” vote meant, Duff recalled.

The school district pays roughly three-quarters of Parsons annual salary, with the Sheriff’s Office paying for the time outside the school year calendar, when the deputy works patrol and other duties, said Undersheriff Jim Littlefield.

Parsons is the only SRO working out of the Pendleton-based office, Littlefield said.

With just a couple of months at his new post, Parsons is still busy learning the lay of the land, he said.

Although his office is at McLoughlin High School, there’s work to be done at the district’s other facilities.

“I’m here for school safety at all the schools. Today I am headed to Gib (Gib Olinger Elementary School) to talk to a little guy with ‘sticky fingers,’ ” Parsons said.

He also does some patrolling in school zones, especially at Ferndale Elementary, set in the countryside outside city limits.

But it’s at the high school where Parsons needs to spend the bulk of his time.

Like any high school, Mac-Hi sees its share of bullying, fights, harassment and vaping issues, the deputy said.

“I haven’t seen drug and alcohol use. Yet.”

At other times, they split to increase rule enforcement.

“I lap the campus and cruise the parking lot. I check the doors — sometimes the kids will prop those open,” Parsons said.

The area around and including boys’ restroom on the main floor of the school is one of those, Parsons and Alvarez agree.

“For some reason, this is where they come between classes and just hang,” Parsons said with a shrug and smile.

“So sometimes we’ll go in and hang with them.”

Having a SRO onsite has been helpful and allows for more eyes on more square footage, Alvarez said, returning from tour of duty in the restroom.

“With Darrin, I feel like I have a lot of backup and support.”

Vice Principal Mario Uribe said having Parsons in the school is beginning to show results.

“At the beginning of the school year, we had 60-plus freshman and sophomores with tardies and detention. Now it’s about 20, meaning we’ve cut the problem in half,” Uribe said.

As well, car break-ins in the school parking lot are at zero since Parsons began, he added.

“It’s definitely a team approach. We all help each other out.”

Working together gives the three men an opportunity to steer students into better decisions, they said, such as suggesting a teen walk away from brewing trouble when they come upon such a situation.

For Parsons, walking this beat has opened the door to a change in attitudes about police.

“I want to bring positive interactions with law enforcement. It’s not a traffic stop, it’s not curfew, it’s not a domestic situation. We’re not in a negative situation here,” the deputy pointed out.

“We’re here to help them. We want them to trust us.”

“And it’s nice to know if you make a mistake, the person sitting across from you isn’t going to hate you. They want you to succeed.”