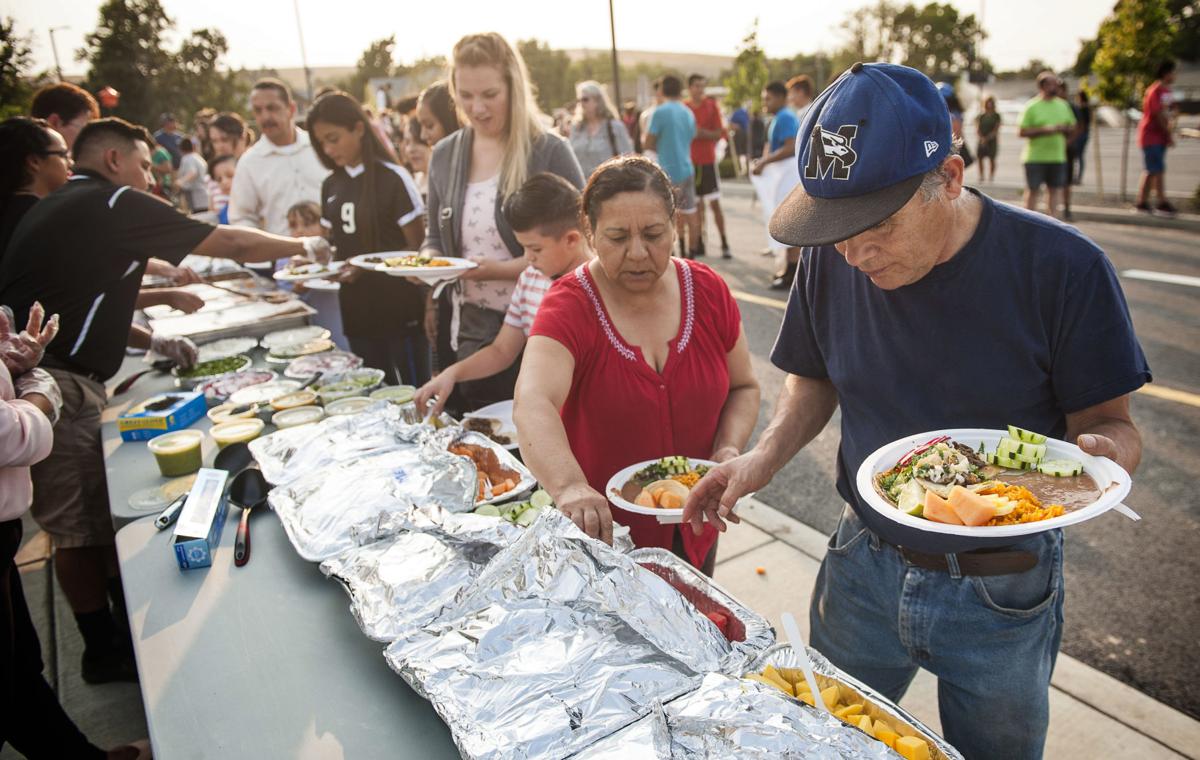 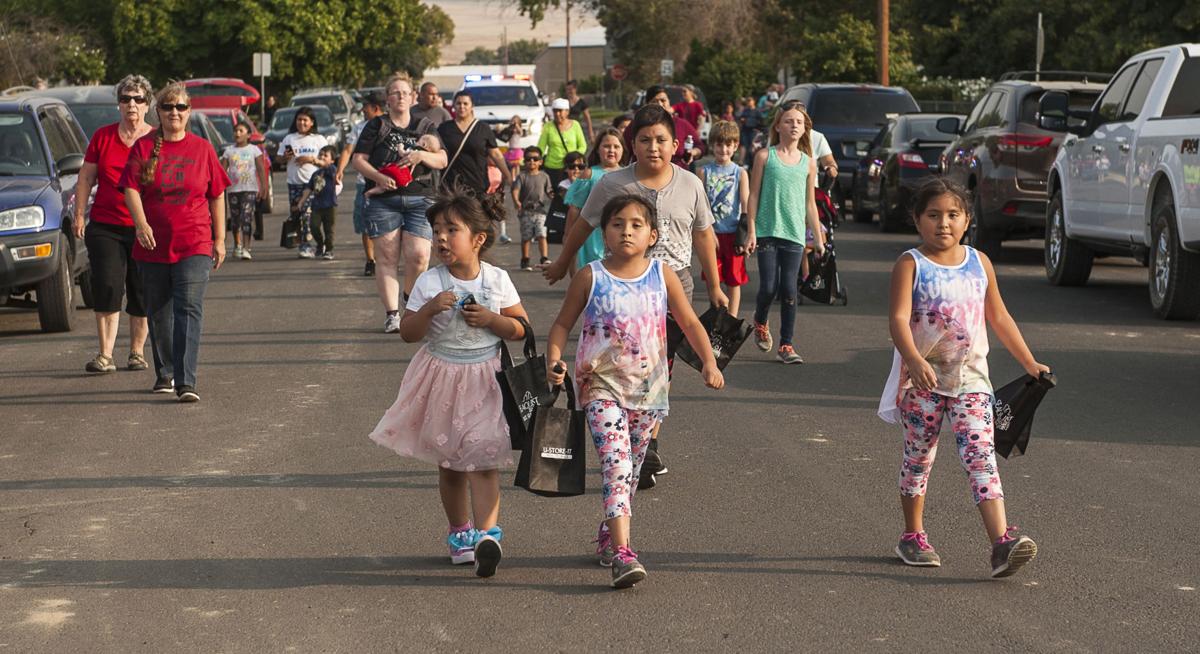 MILTON-FREEWATER — Standing in front of Gib Olinger Elementary School Thursday evening, Lori Bradshaw waited with a smile as a small but exuberant parade made its way north on Mill Street.

Like most parades anywhere, the lineup was headed and caboosed with city police vehicles. In between high school cheerleaders stomped, twirled and cartwheeled down the street, followed by an assortment of adults and children, many in costume.

Bradshaw had two grandchildren marching along, she explained, who will soon be attending the brand new elementary school, already known as “Gib.”

“They are very excited,” she said. “They love school.”

Despite supporting the $12 million bond that paid for about half of Gib to be built, the grandmother said she is still in some shock at the resulting end product.

The school is the first from-the-ground-up school to be built here since 1922 in the Milton-Freewater Unified School District. The building boasts state-of-art technology, large expanses of windows, sturdy surfaces and child-friendly colors.

“It’s big,” Bradshaw said, with a turn to look at the 75,000-square-foot building designed to hold more than 600 students.

Several hundred people turned out for Thursday’s hoopla at the school on Mill Street, part of nearly a week of Gib-centric events that both took the place of the town’s annual festival and opened the school to the entire community for the first time.

Doors open for school Sept. 4, when about 550 kindergarten through third-grade students will arrive via bus, parent or the district’s new “walking school bus” plan for children who live too close to Gib to be transported by the district.

Although not a festival per se, the vibe in and outside the elementary school was joyful on this evening. The wildland fire smoke that’s plagued the Walla Walla Valley for about two weeks had lifted for the moment, and the temperature was cooler by several degrees. The parking area designated for activities was dense with chattering children and smiling parents.

What was not to like? The cheerleaders had regrouped to lead the crowd in McLoughlin High School’s victory cheer. The dunk tank had a line of youngsters eager to drop victims, er, volunteers into the drink, and the Les Schwab Tire Center football toss was busy.

As cheerleaders were replaced with young members of Walla Walla-based Chiquillas Ballet performing traditional Mexican folk dances, a line was growing at a free taco bar. Super Milton Market had donated enough tortillas and taco fixings to fill tummies and send a tantalizing aroma over to the cornhole boards where an informal competition was taking place.

Other community businesses had set up shop, as well. Glitter tattoos — heavy on the butterflies — were adorning cheeks at the Community Bank table, while Photography by Jamie Brown hosted a selfie booth with dozens of photo props.

An Gib’s Commons, the Harvest of Art exhibit drew people into the building where 30 pieces of art waited to be nominated for the People’s Choice Award.

One future Gib student, with her mom’s help, was filling in her vote for 9 year-old artist Teo Masferrer’s “Hungry Duck” print as other art fans perused the exhibit.

Wandering through the crowds, Superintendent Rob Clark wore fatigue and happiness in equal parts. Getting a school up, literally, and ready for use has taken up most of Clark’s summer. Friday’s official dedication activities were yet to see through before reaching the weekend.

“It’s been a little crazy,” he said in wry understatement.

But there was no downplaying the joy of Thursday’s gathering.

“I’ll tell you this,” he said, waving a hand toward the clusters of folks at every activity station, “I’ve been here five years and I go to just about everything. I’ve never seen a Latino turnout like this, and I’m talking men’s soccer, women’s soccer, basketball … there’s never been anything like this.”

The district’s student population is just over 60 percent Latino, he noted.

Seeing a corresponding response from those parents and families made every tired bone bearable for Clark.

School board chairman Duane Geyer was just as pleased with community response. Geyer said he has served for various long terms on this board and has weathered disappointment time and again when other bond efforts failed.

“This is a great gathering of people. This is the first step on our journey to our future place.

“This will serve the community in ways we can’t even imagine.”