McLoughlin High School band director Mike Agidius leads the jazz band in a rendition of the “Hawaii Five-O” theme during a recent rehearsal. Agidius is wrapping up his decades-long career at Mac-Hi with the end of the school year. 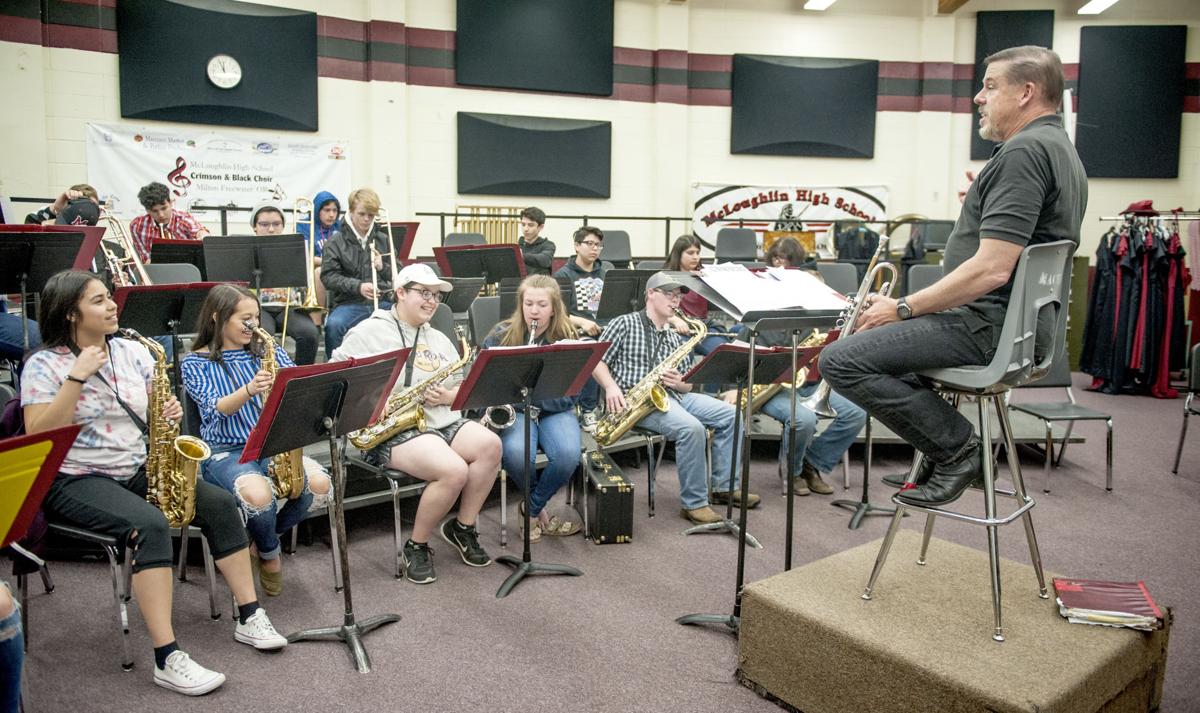 Mac-Hi band director Mike Agidius has worked at the school since he graduated college in the 1980s. His last time directing at the school will be a May 22 concert at the high school. 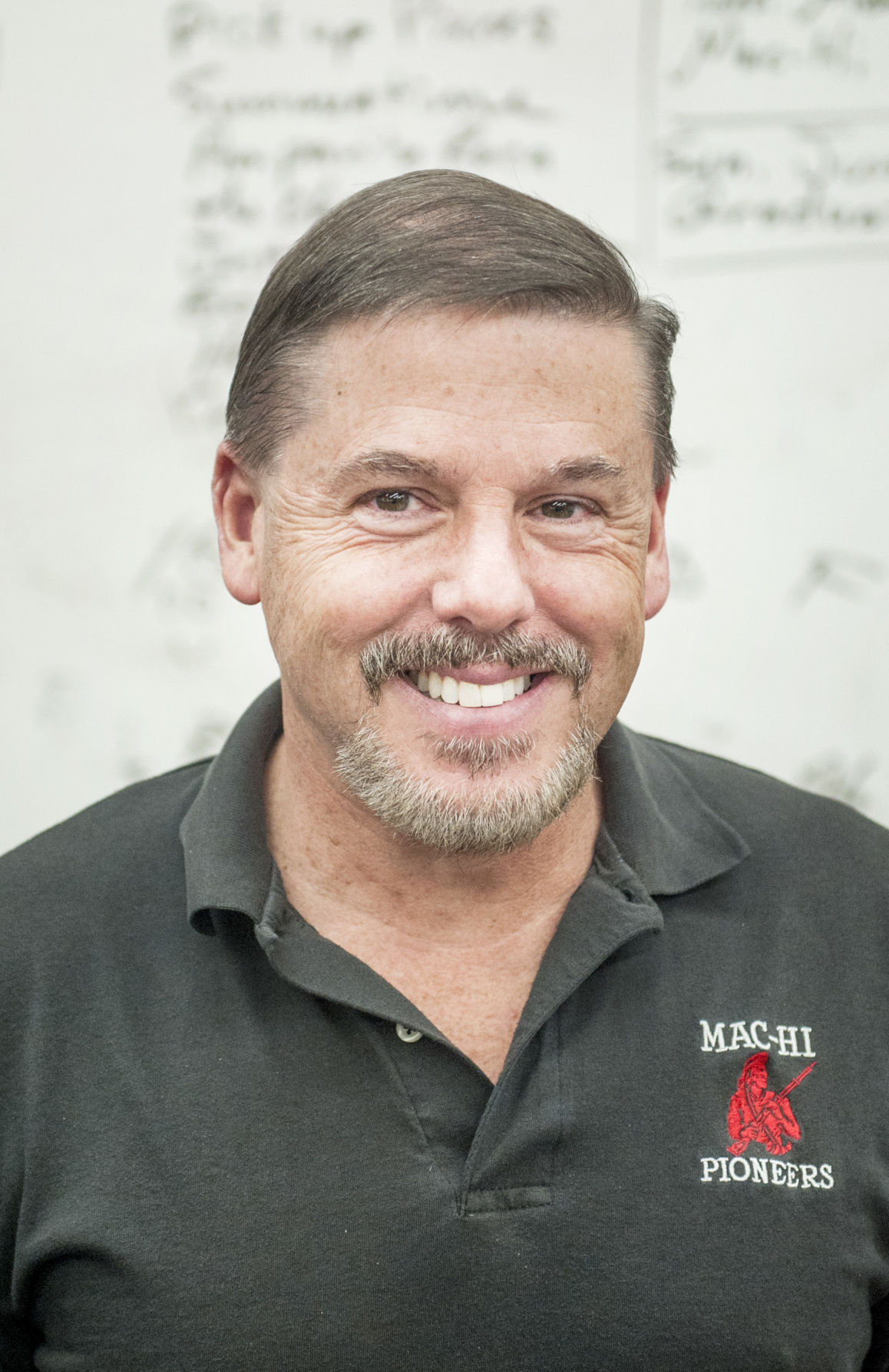 McLoughlin High School band director Mike Agidius leads the jazz band in a rendition of the “Hawaii Five-O” theme during a recent rehearsal. Agidius is wrapping up his decades-long career at Mac-Hi with the end of the school year.

Mac-Hi band director Mike Agidius has worked at the school since he graduated college in the 1980s. His last time directing at the school will be a May 22 concert at the high school.

MILTON-FREEWATER — Mike Agidius didn’t plan to be here this long.

He’d accepted the band director gig for the small Northeastern Oregon school district before even graduating from Willamette University in 1987.

The idea was to spend some time in this corner of the state before eventually moving closer to The Dalles, Ore., where a ninth-grade saxophone player named Mike had first decided to become a band teacher and musician.

At age 21, Agidius had no inkling he would call Milton-Freewater home his entire education career and, along the way, bring home top honors with school bands. He had no clue he would significantly influence music in the greater Walla Walla Valley.

Now 52, he’s reached the coda — that’s “music” for the closing section of a movement. At the end of this school year, Agidius will clear his band room of personal effects and walk out, after 31 years of giving more than 1,000 students the opportunity of music.

Opportunity is what band and choir — as well as a roster of other activities — represent in any school district, said Milton-Freewater’s Superintendent Rob Clark.

‘If you want your kids to get a well-rounded education, a ‘full meal deal’ if you will, you have to have strong academics, full clubs and strong arts. And you have to fund those at a level that makes it competitive,” Clark said.

As in many small towns, music has opened doors some students would not otherwise have a chance to walk through. Through exposure to classical, jazz, swing and other musical genres, yes, but geographically as well. Agidius became known for the state and regional competitions his band students have placed at, often bringing home first- and second-place trophies, noted Ken Simpson, who’s kids participated in band here from sixth grade on.

Agidius worked hard to make those festival trips happen and to be sure his students represented their community well, said Simpson, who runs a chiropractic and sports clinic in town.

Simpson’s son Lucas graduated from Central Washington University with a degree in music performance in 2016. Now 24, Lucas is playing music professionally because of his band experience in the Milton-Freewater school system, Simpson said.

“Mike has just been a wonderful asset to have in the community for the things he does for music,” Simpson said.

He was more idealistic when he arrived in Milton-Freewater, Agidius recently recalled.

“I started a middle school jazz band, and we were winning first place by the third year.”

That win came via just 13 students. As the awards came in, so did more students. At first, school administrators were just surprised and happy to see the music programs grow, Agidius said.

“And then, I think, they started cramming as many bodies into band as they could.”

The director rolled with it, forming quartets, ensembles, concert bands and multiple jazz bands. His teaching days began at 7 a.m., with middle-school-aged Duke Ellingtons, and ended with bleacher-based pep bands at football and basketball games.

While he’s “lost a lot of weekends and evenings to band,” in all that time he’s never missed a single concert, game or festival because of illness, Agidius said.

One of his proudest moments as a director came in March 1999, when his high-school and middle-school bands took first place at the Clackamas, Ore., jazz festival, and Mac-Hi also won the top overall prize, he added.

Within his bands, a number of special-needs kids found a niche, a place to really belong at school, he recalled.

It’s the same for most who find their way to playing an instrument in the timeworn band rooms in the district. It’s not that band is an alternative to football or drama club or FFA, it’s that kids want to be in the band, Agidius said.

“I didn’t realize this until many years into my teaching, but my students told me band is like a family,” he said.

Travel only helps cement the relationship. Kids are in buses for hours to get to competitions. Sometimes they play against schools similar to Mac-Hi, other times the Western half of the United States is represented by a profusion of bands. Agidius said he’s lost track of how many awards his students have brought home.

Although the district superintendent said he lacks “a musical bone” in his body, Clark said he appreciates it in others.

“In my many decades of being around high schools, Mike Agidius is as good of a band teacher as I’ve been around,” Clark said. “I would put Milton-Freewater in the top 10 to 15 percent of school bands statewide.”

Dave Glenn agrees. Glenn was director of jazz studies and professor of low brass at Whitman College for more than 20 years.

Like other music educators, Agidius chose “one of the hardest jobs on the planet,” Glenn said. “In music, you always have to do so many things outside the class.”

Glenn frequently judged jazz festivals while at Whitman, and found Mac-Hi bands easy to work with. While Agidius has high expectations of his students, “he’s also a staunch defender of his kids. He expected hard work but really appreciated the hard work they put in,” Glenn recalled.

Agidius carries that attitude into the musical world he inhabits in Walla Walla, according to Dr. Richard Simon, who met Agidius soon after the college graduate arrived.

The new band director quickly immersed himself in gigs with peers, from riding with the Pendleton’s Cowboy Mounted Band to being a member of jazz and swing bands in Walla Walla. Simon, also an active musician in the community, said he was impressed with Agidius’ mastery of any instrument and wide range of genres.

“He likes real music, like when he plays in the ‘Big Band’ charts,” Simon said. “He wants something interesting and somewhat difficult. When he plays, your feet move, you get excited.”

As a physician, Simon marvels that Agidius lasted this long as a band director.

“You talk about the noise, and there’s no protection in most band rooms. If you are listening to that all day long, your nerves are on edge at the end.”

Few people can truly understand what it means that Agidius garnered so many accolades for schools the size of Mac-Hi and Central Middle School, Simon added.

Agidius will publicly pick up the baton for the last time as a Milton-Freewater educator on May 22, for the 7 p.m. high school concert.

Once the school year ends in June, he’ll step into the next phase of life. That includes continuing to direct Big Band at Walla Walla University and putting more time into “Agidius Instrument Repair,” the business he launched in college.

He’ll also practice sleeping in after 31 years of rising early, and ride his horse more.

Mostly, though, Agidius said he wants to play for others.

“I’ve always wanted to do more of that, and record, too.”

Simon said he sees it this way — the school district’s loss is everyone’s gain.

“Mike loves to perform, and that’s what he should be doing,” Simon said. “Mike is one of the biggest reasons music has flourished in Walla Walla.”