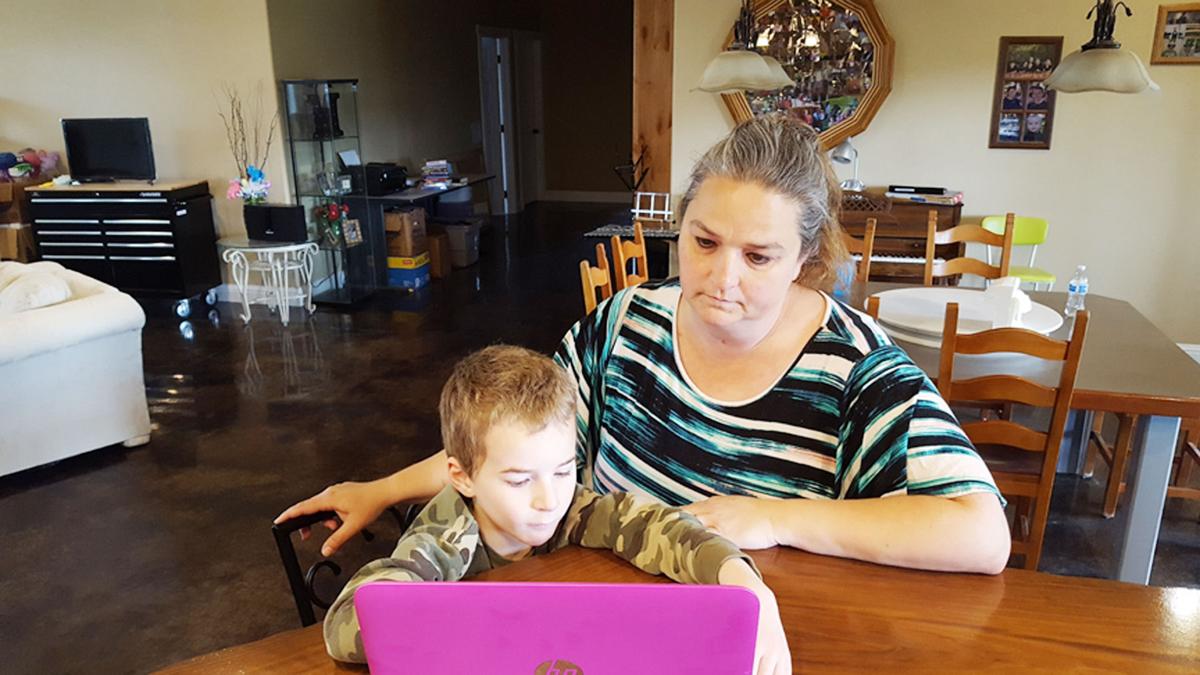 Talitha Merritt helps son Preston, 7, set up for an interactive language arts lesson at the kitchen island. Preston is enrolled in first grade through Washington Connections Academy, an online school that was approved in the state in 2016. 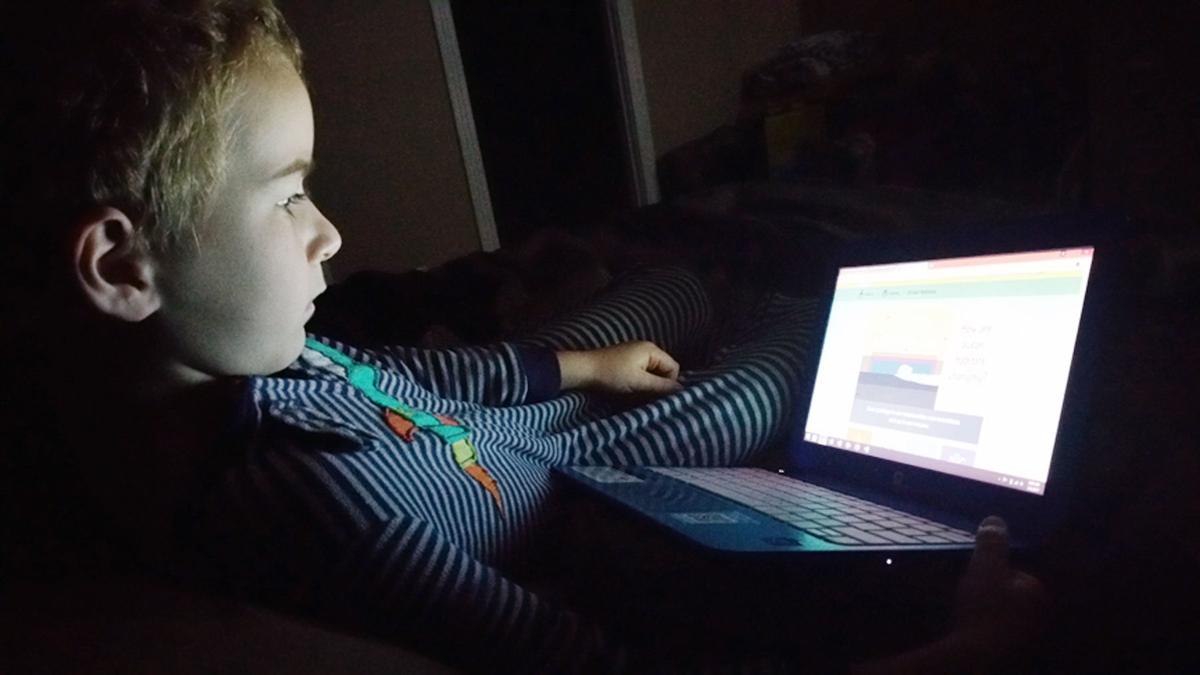 Preston Merritt does school anywhere, and sometimes while clad in “jammies,” his mother says. 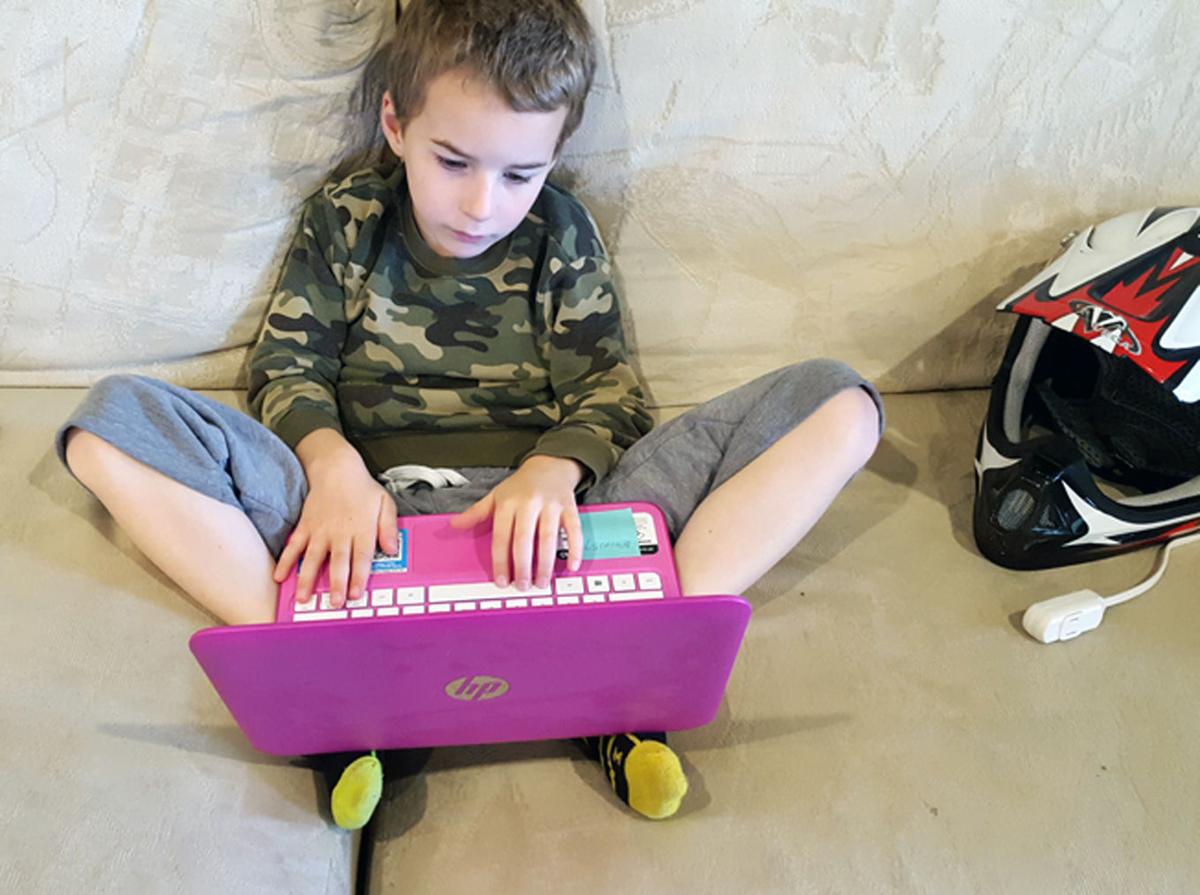 Preston’s “desk” bears testimony to the flexibility of an online learning program and of a 7-year-old boy.

Talitha Merritt helps son Preston, 7, set up for an interactive language arts lesson at the kitchen island. Preston is enrolled in first grade through Washington Connections Academy, an online school that was approved in the state in 2016.

Preston Merritt does school anywhere, and sometimes while clad in “jammies,” his mother says.

Preston’s “desk” bears testimony to the flexibility of an online learning program and of a 7-year-old boy.

Preston Merritt stares intently at his computer screen, waiting for a prompt from an unseen teacher to type out the word for which he clapped once for each syllable. His fingers hover over the keyboard.

“Let other kids have a chance to type, too,” Talitha Merritt reminds her youngest child, referring to Preston’s also-invisible classmates across Washington state.

“I know most of it,” he later said of his online language arts lesson. “I know a lot of words.”

In 30 minutes, teacher Erika Montgomery has wrapped up the weekly “live lesson” over the computer connection. Preston, 7, leaves his seat at the kitchen counter in the family’s home in Walla Walla to find a spot on one of several couches in the living room.

Preston is a first-grader enrolled in Washington Connections Academy online public school. The no-tuition, virtual school was approved in Washington state for grades K-12 in 2016. It serves grades K-8 this year and will enroll for K-10 in the fall.

The parent organization, for-profit Connections Education, was founded in Baltimore in 2001. The program is currently available in 28 states.

Such schools come under a variety of names — online, virtual, cyber and, as Washington state deems them, “alternative learning experiences.”

In Washington, Connections is registered in the Mary M. Knight School District in Elma and uses state-credentialed teachers. For this year, the school topped out at about 550 students, Connections Principal Mike Lunde said, adding that five of those children are in Walla Walla and Columbia counties.

Curriculum, teacher salaries and materials for cyberschools are paid for by the same tax dollars that fund brick-and-mortar schools.

Online and other nontraditional public schools have been in the spotlight this year.

Betsy DeVos, the new U.S. Secretary of Education, has long promoted virtual and charter schools. It’s a point of contention for her critics, who say she lacks public school experience. Neither DeVos or her four children attended a public school. Her husband, Dick DeVos, was an investor in K12, a network of more than 70 online schools, according to new stories.

However, several studies raise questions about the reality of virtual education, according to a National Public Radio online story in February. The news article quoted Sen. Patty Murray, D-Wa., who asked in a question written to DeVos why online schools had such poor performances.

Murray said this week she remains troubled, particularly for families who have fewer education options.

“Rural communities absolutely need flexible learning options to make sure that every one of their students has access to a high quality public education, but I get concerned about for-profit online schools that too often put their bottom line above the needs of students and parents,” she told the Union-Bulletin.

“So we all need to keep the focus on accountability and results when it comes to new options like these to make sure that no student falls through the cracks or that taxpayers aren’t being taken advantage of. And I believe that the best thing we can do for students in rural communities is to invest in strong, flexible, and accountable public schools.”

Not head of the class

In 2015 the Center for Research on Education Outcomes at Stanford University found the majority of online charter students had weaker academic growth in math and reading than students in traditional public schools.

That pattern remained consistent across racial, socioeconomic and ethnic lines.

Stanford’s study also found that after returning to physical schools, former virtual students changed schools at a rate of two to three times higher than their peers. About 22 percent of online charter students eventually return to traditional school after an average of two years.

The Merritts discovered online school to be a less ideal fit for their 12 year-old daughter, who had been immersed in a regular classroom through fifth grade. After several months of trying out online learning, the girl returned to her neighborhood school. The youngster does better within the structure provided in a traditional setting, the family learned.

A recent investigation by Education Week national newspaper found that publicly-funded “cyber charters,” with about 200,000 enrolled students across the country and pulling in about $1 billion in taxpayer dollars, often serve a gamut of needs. Students who are being bullied in school, or struggling academically, might be attracted to learning at home. And kids who are preparing for, say, acting or athletics may need the advertised flexibility of a virtual academy, Education Week said.

Intent doesn’t always mean success. In some examples of academic results, as noted in the national study at Stanford, math scores were so low it was almost as if students “didn’t attend school at all,” Education Week reporter Arianna Prothero said.

Connections Education, the national umbrella over Connections academies, has its share of issues. Investigators found problems with how infrequently students in some of the company’s online charters log in, use the school’s software, and complete lessons and assignments, Education Week reported.

States pay out for each student enrolled in cyberschool, yet making online schools accountable is difficult.

Part of the challenge is that few states require online schools to report basic information on student logins, software usage, and lesson and course completion, the story noted, adding that Connection officials say there is no consensus on which state’s approach to tracking attendance and student engagement works best.

The company told Education Week it does not believe login information is useful for teachers or administrators, but it is developing its own system for tracking attendance and participation.

That said, the company conceded it should be held to be accountable for its students.

Statewide, white students make up 68 percent of those students; they average 55 percent in physical schools across the state. Other races are underrepresented in online learning in comparison to in-the-classroom, said the state’s Office of Superintendent of Public Instruction.

Overall, Washington students completed online courses with passing grades 79 percent of the time in 2015-2016, compared to 92 percent in traditional classes.

The state plans to streamline access by allowing school districts to work directly with approved online providers like Connections. OSPI also suggested that course offerings be expanded, including credit retrieval and options for students who are suspended or expelled.

Next year’s audits will give information for each online school in the state, expected to help measure the success of online education programs, and include identifying and responding to truancy of online students, according to the OSPI report.

Stanford’s study recommends states examine the current progress of existing online programs before allowing expansion. Without a building and a finite number of students to act as stop signs, online schools have the potential to grow faster than is good for their students, the study’s authors cautioned.

In Oregon, an average of 48 percent of online charter students graduated on time last year, Oregon Public Broadcasting noted in an April online article. The state’s Department of Education noted one online school had a graduation rate of 9.52 percent, compared to the state average of 74 percent and the national average of 83 percent.

Preston Merritt, years away from graduation, only knows school in cyberspace and the flexibility it offers his parents. On some days that means doing lessons in pajamas, in the car or in the shopping cart.

It also means he will finish social studies and science within days — his mother said they’ve done some double scheduling to get those subjects out of the way.

So far Preston is doing well in his classes and she appreciates that Washington Connections, at least, has built degrees of accountability into its grading system. Preston takes regular state testing three times a year, for example, and the programming won’t allow him to skip lessons.

“He has to take pictures of the assignment and upload it to Dropbox before checking it as ‘complete.’ You can’t just jump ahead,” Talitha Merritt pointed out.

Learning online definitely takes self discipline, she said. Although her family initially chose the virtual model to allow for more freedom for the family to travel, students must still be available to check in with teachers through computer interface, email or a phone call.

So far this school year, Preston has participated in a school field trip to Bechtel Planetarium in Tri-Cities. There he met teacher Erika Montgomery face-to-face, along with about 25 other Connections students. He gets regular social opportunities through extended family and friends, Merritt said.

“Preston is everyone’s friend … there is no age discrimination,” she said

Her son has always been an eager learner, reading by kindergarten and working computer programs with ease, she added.

“I think he would struggle at regular school.”

Because of a reporter's error, Arianna Prothero's last name was misspelled in this story. We regret the error.

Cyber principal a multitasker online and off

Mike Lunde is used to the question — “Why does an online school need a principal?”