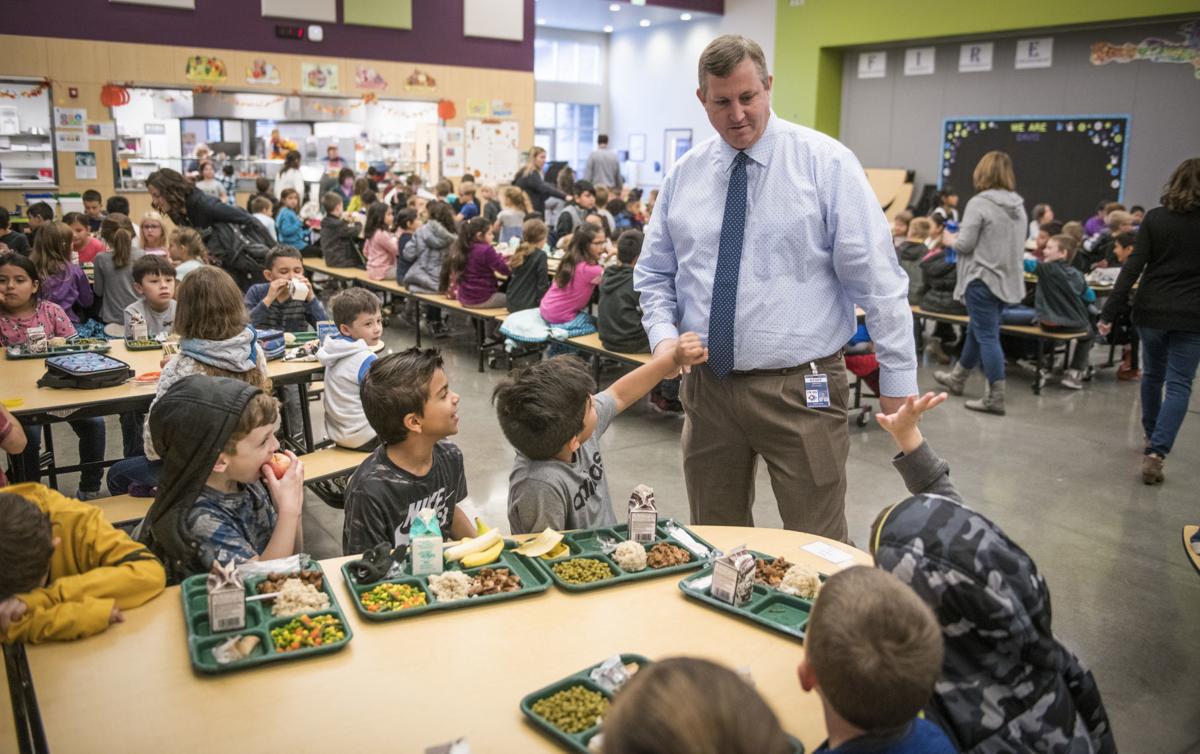 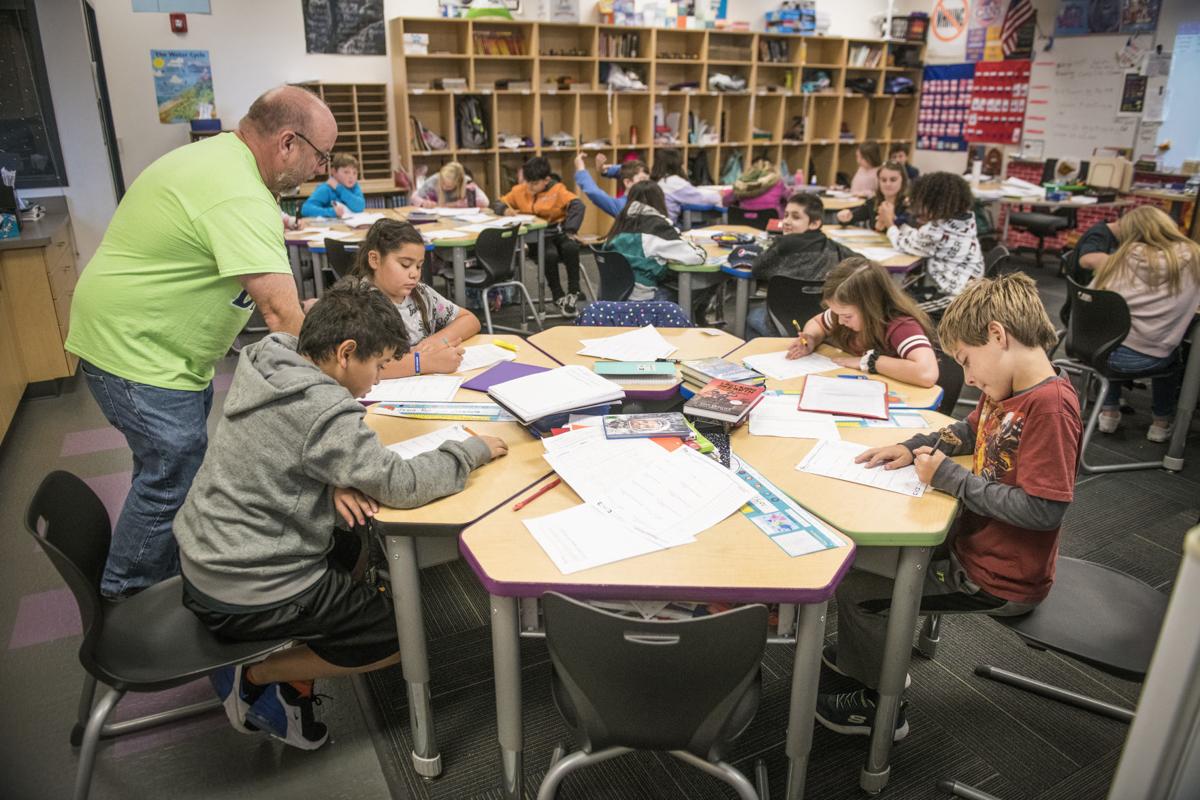 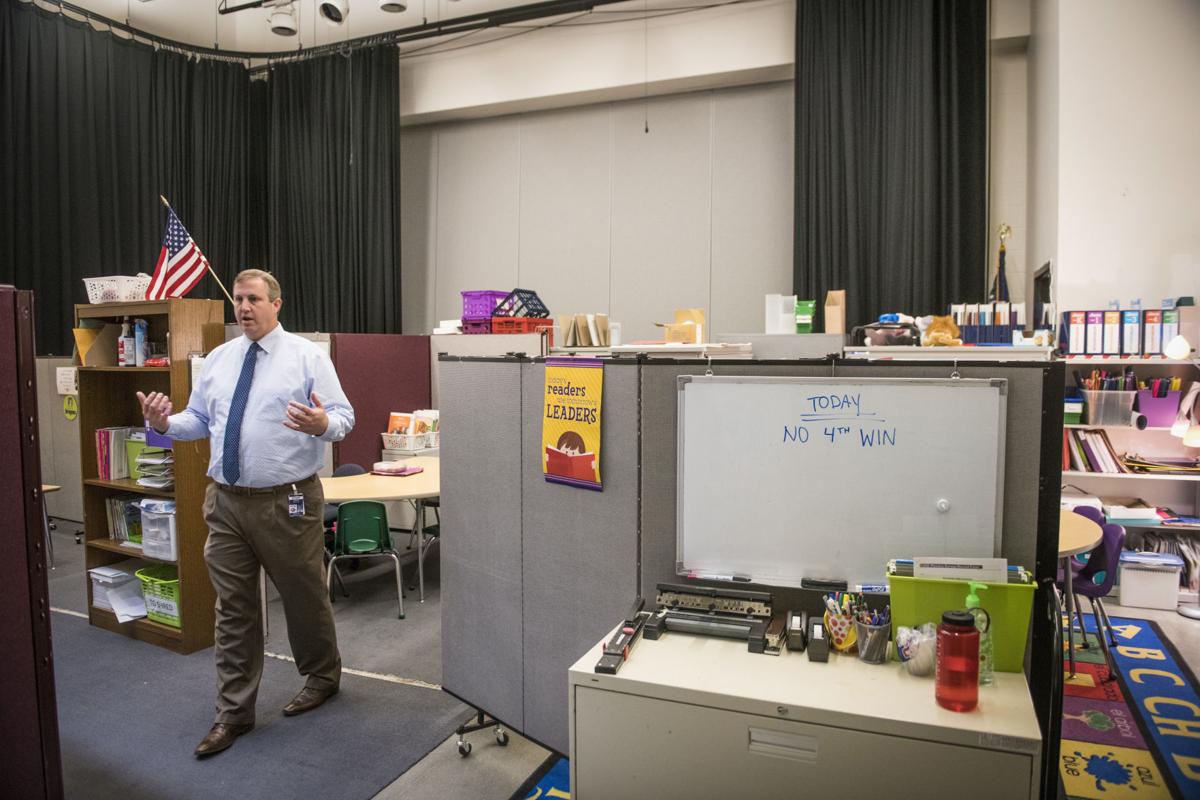 Superintendent James Fry gives a tour of the backstage area at Davis Elementary School. For nearly as long as the school has been open, this section has needed to house specialized teaching space rather than the drama production supplies it was intended for.

Superintendent James Fry gives a tour of the backstage area at Davis Elementary School. For nearly as long as the school has been open, this section has needed to house specialized teaching space rather than the drama production supplies it was intended for.

It’s great news, Wells said in a newsletter to parents, but the growth puts a strain on infrastructure and resources.

District officials are looking for land to purchase for a future school site with funds that have been set aside for such growth, she said.

In the meantime, Davis Elementary School on Ash Street is particularly squeezed this year. Administrators have tried to be creative in carving out new places for learning and other activities.

Superintendent James Fry calls those measures the school’s “pinch points” — such as on an upper floor, where temporary teaching spaces jut out into common areas that weren’t really designed for partitioned-off tables and desks.

Nearby, a computer lab has morphed into a second-grade classroom.

Behind the area originally built as a stage for school productions, makeshift specialist offices vie for space with bookshelves and lockers. Table lamps try to make up for the lack of natural lighting.

It’s in the lunchroom, however, that crowding at the school is easiest to see.

As second-graders move into the cheerful space, first-graders cycle out to make room for the new arrivals. As this day’s teriyaki chicken, mashed potatoes and mixed vegetables are consumed by about 120 second-graders, the noise level reaches the rafters.

“Second grade is our biggest class,” Principal Mark Ferraro nearly shouted as students swooped and whooped about him.

And the room that once served as staff lunchroom has housed a seventh kindergarten class since October.

This year, some teachers eat in the center of a wide communal hallway in one wing of Davis, where students wander to and fro during lunch time.

Not without “a lot of staring,” teacher Ashley LeClair noted with a grin.

Despite the challenges, too many students is a “good problem to have,” Fry said, noting it indicates community growth, a broader tax base and a healthy school district.

Still, it’s a problem, and the College Place School Board will soon be tasked with figuring out short- and long-term solutions.

Davis Elementary was torn down from its original site and rebuilt 100 yards away, opening August 2014. The expectation was that space for 750 students would be sufficient for a long time.

Although the school’s square footage still adds up on paper, in reality keeping the younger classes lower in numbers and providing space to meet all support services means Davis is already close to topping out at about 708 kids, Ferraro said.

Adding in the staff, that comes to about 775 people, Fry said.

This year the district is up overall by 100 students — so far — and Davis has absorbed more than a third of the load, he said.

Space suggestions have been floated, including adding a second floor over one wing, extending the footprint of the school and using portables.

There’s even been talk of moving Davis’s fifth-graders to Sager Middle School or renting another facility for some school services, he said.

Currently there is no room at Davis for the district’s preschool program; it’s being housed at a church a bit over half a mile away.

Some expansion ideas aren’t feasible; the building’s structure can’t support anything more on top, for example, and campus space isn’t conducive to punching out another wing, Fry said.

Portable classrooms would seem the the fastest fix, but how do you add more students to fixed common spaces, such as the library and cafeteria?

“Everything has to grow exponentially … custodial and food services, music, P.E., secretarial and counseling staff,” he said.

If the housing supply continues to increase in College Place, answers to school overcrowding will have to come soon.

“Do we want to build for an elementary population of 900 kid? Overextend the building? Or build something else? We have to prepare Davis to handle growth until we can build a new school,” Fry said.

He estimates the district is about six years away from running another building bond. The last bond for $49 million was passed in 2012. With it, the district built College Place’s first public high school, rebuilt Davis, renovated Sager and added a bus barn.

Growth at the new elementary building has ranged from explosive to steady, Fry said, and population projections show Davis could gain another 300 or so students in the next decade.

Yet, growth is sweet, he reiterated.

“It is an absolute blessing. I know what it is to see the other side of that coin.”

There’s no question that the district will do what needs doing, Fry said.

“All means all — we are choosing to find solutions to educate everybody.”