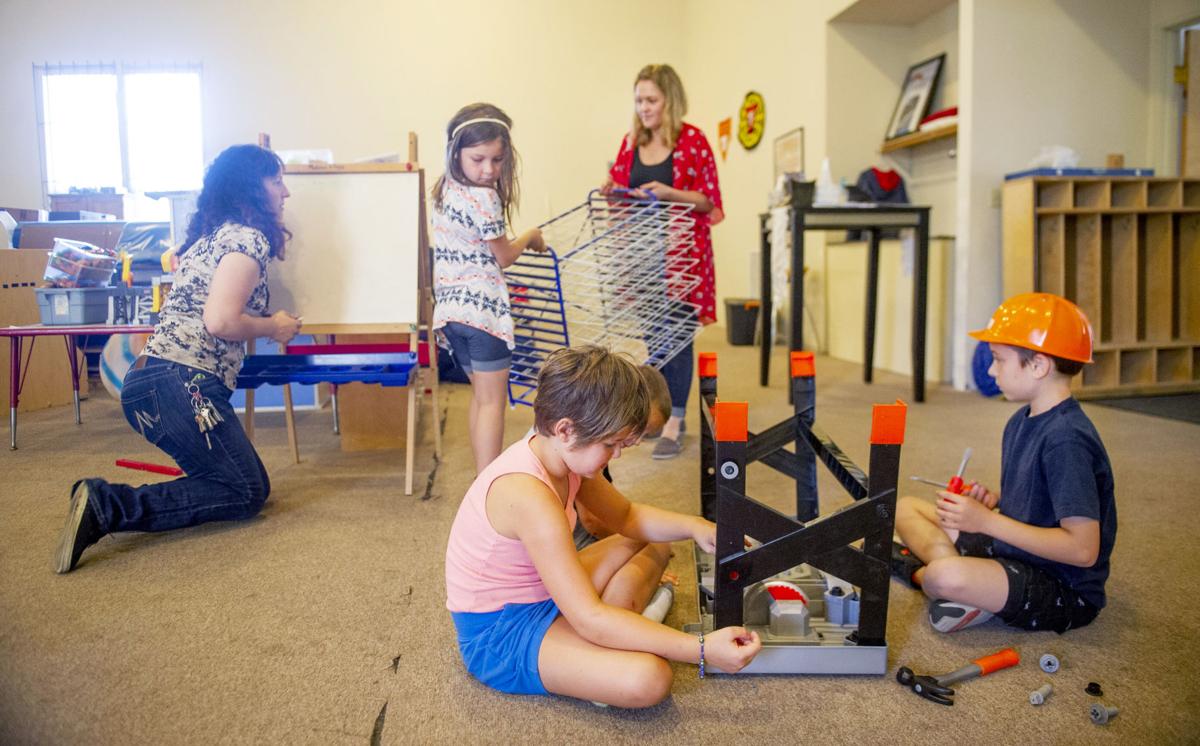 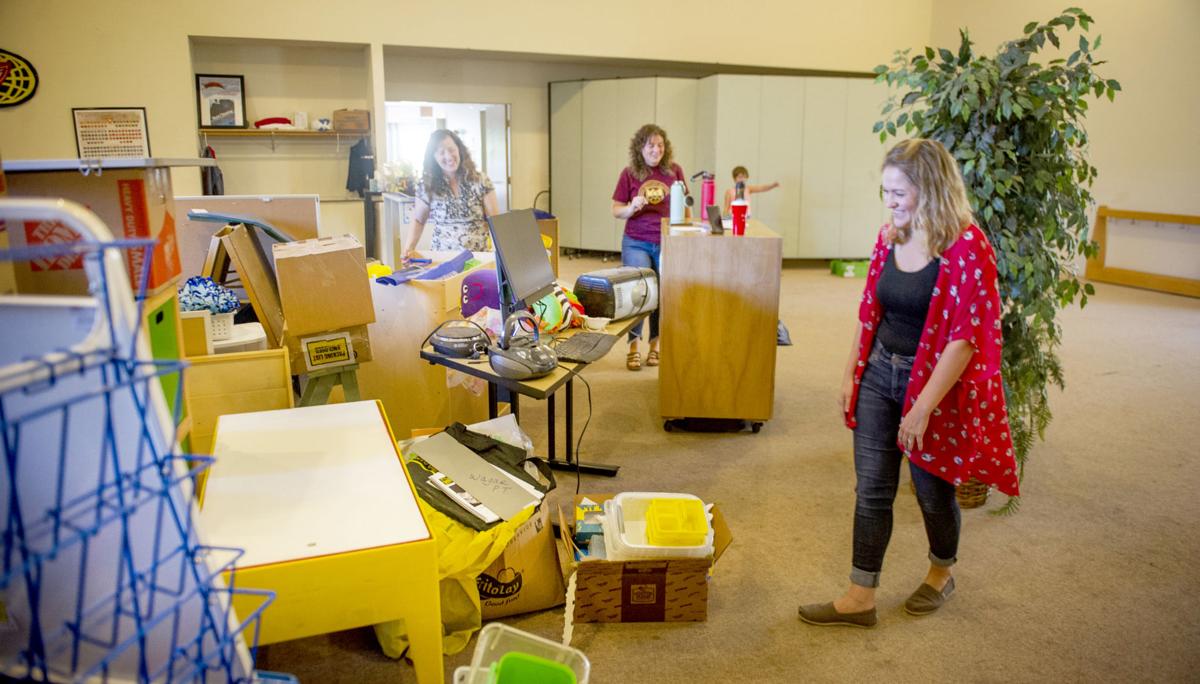 COLLEGE PLACE — Beth Mertens and Tracey Tiffin have their work cut out for them, and not with kiddie scissors, either.

On Tuesday, the two College Place Public Schools preschool teachers were dwarfed by a cavernous space holding stacks and stacks of totes, boxes and tot-sized furniture.

Here were art easels and big bouncy balls, over there were two kitchen play sets and foam-filled ottomans. A basket of colorful string beads nestled in another basket of wooden shapes. A jug of glue sat sentinel on a bookcase.

Improbably, a flock of rubber chickens was nesting in a tub.

Those are used for tossing to children to improve hand-eye coordinations, Mertens noted.

Legos on the left of them, hula hoops to the right, there they were — two teachers trying to create a bright and inviting new classroom space out of a church fellowship hall with a subdued paint job and lighting.

Neither woman was deterred, however.

“Come back in two weeks, and it will be totally different,” Mertens urged.

The situation may be momentarily daunting, but the reason behind the work is good news for the community, said Justin Bradford, director of special education for the school district.

When Bradford took the job in 2018, the district’s preschool program had shrunk from what he’d heard was a larger offering. Left was a developmental preschool for children with learning or physical issues. Or both. The program was housed at Walla Walla University, as there is no room at Davis Elementary School, Bradford said recently.

He came into a program with about eight kids in a morning class only and grew it to 22 students and a second, afternoon session by the end of the 2019 school year.

“Those are just the ones we knew about,” he said.

Bradford said he approached district administration and asked about starting another preschool for families that meet a low-income requirement. It’s called Early Childhood Education and Assistance Program — ECEAP — and is funded by Washington state as its version of the federal Head Start preschool.

Like Head Start, ECEAP is for ages 3 and 4 and is tuition-free, early learning that includes family involvement, health and nutrition services for families. There is an emphasis on building beginning math, science and reading skills, emotional regulation and following classroom procedures. In general, the idea is to help a child succeed in regular school by doing prep work before they get there, Bradford said.

The state pays for so many ECEAP slots per region, and, with the school board’s blessing, Bradford lobbied for 15 full-day placements for College Place. He got them, and with the children signed up for the developmental preschool program, that brings the district’s preschool capacity to 45 children.

“I believe early learning needs to be an option for all students. Every student benefits in some way, whether it is a private or public preschool,” Bradford said. “At any given time there should be about 100 College Place kids who can go to preschool.”

But that’s an expense not every family can absorb, he said, noting the state says it promotes early learning, but the availability of affordable options is not widespread.

Bradford and his staff hope to get even more preschool spots in the near future, to serve College Place families even better.

In the meantime, there was work to be done. The space at Walla Walla University was not going to hold all the little students, and Davis was as full as ever. That meant Bradford had to start hunting for real estate.

“We looked all over, even at empty storefronts. Then, at Iglesia Adventista. I noticed they were building.”

The Spanish-language Seventh-day Adventist Church on Southeast Larch Avenue, has indeed been constructing a new 9,800-square-foot sanctuary cheek-to-cheek to its first building, a project that’s been 25 years in the making, church officials told the Union-Bulletin more than a year ago.

And now, a preschool space. And in College Place, partnering with a Spanish-language, community-oriented church is an ideal relationship for a school district that serves a Latino population of more than 40 percent, Bradford said.

Bonus: The church already has plenty of kids in its congregation, and leaders there understand things will happen to carpets, walls and fixtures, he added.

“They are not super protective of the space.”

Bradford said the school district, ECEAP and state funds will all pay part of the $2,000 a month to use 2,600 square feet of the church. ECEAP will also pay some salary costs for more teachers, plus provide furniture and equipment for its preschool students.

Those payment agreements will be invisible to kids and their parents, he said.

“It’s a blended preschool model that serves all kids and moves us towards a model of increased inclusion,” Bradford said.

That’s exactly how Beth Mertens wants it. As a longtime life skills teacher at Davis, her choice is that all students will learn together, regardless of what program is paying for them to be at school and what challenges they have, she said.

“The more we can integrate our life skills kids with general education kids, the better.”