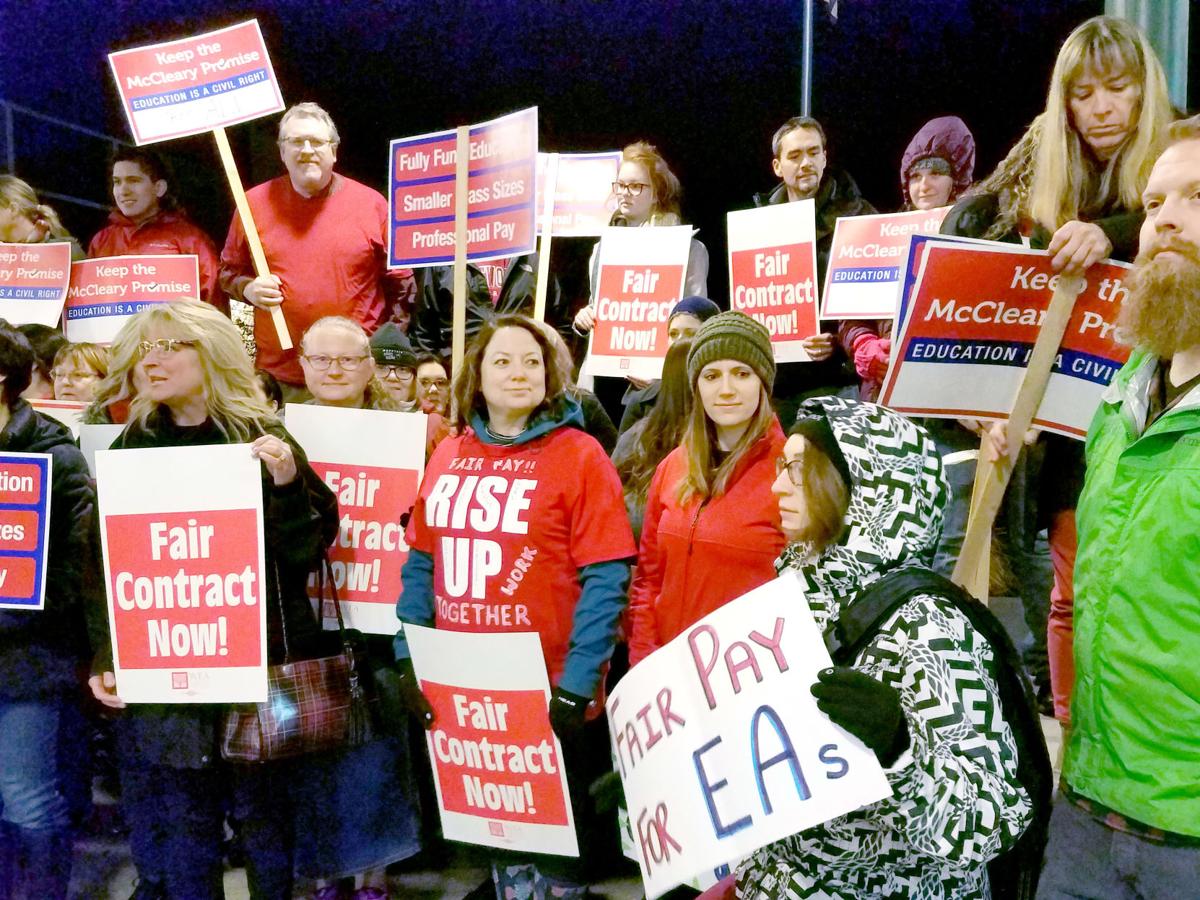 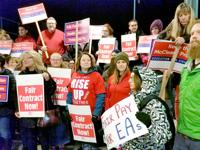 Members of the College Place School District’s classified employees union and their supporters carry signs and a determination to get wage increases at Davis Elementary School before Tuesday’s school board meeting. 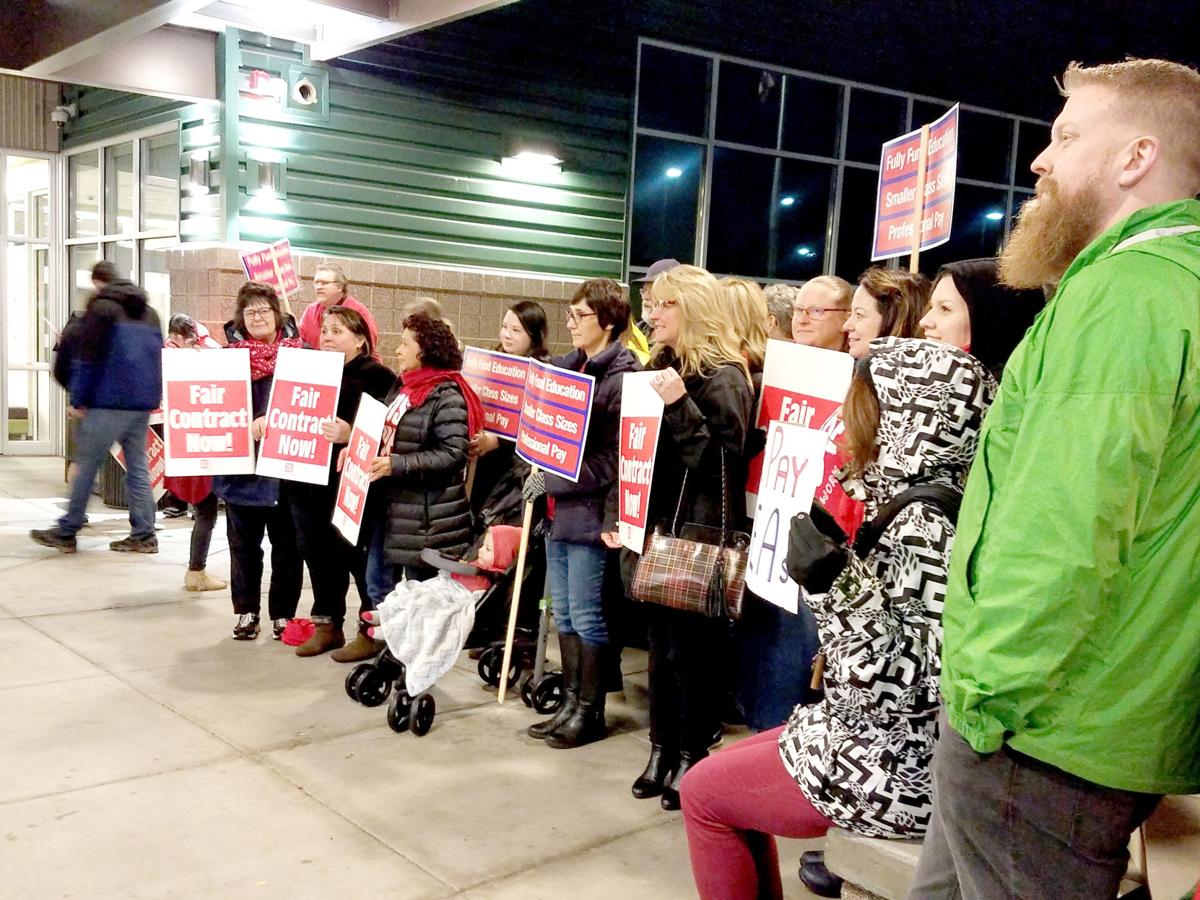 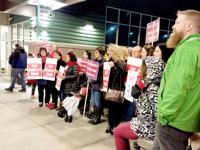 More than 50 people gather before the College Place School Board meeting Tuesday despite wintry weather to protest what they say is unbalanced compensation for classified staff at College Place schools.

Members of the College Place School District’s classified employees union and their supporters carry signs and a determination to get wage increases at Davis Elementary School before Tuesday’s school board meeting.

More than 50 people gather before the College Place School Board meeting Tuesday despite wintry weather to protest what they say is unbalanced compensation for classified staff at College Place schools.

COLLEGE PLACE — More than 50 people held signs in front of Davis Elementary School in the cold and rain of Tuesday night, chanting “Hey, hey, ho, ho. These wages now are way too low.”

Most of the group were classified employees from College Place Public Schools. Others came from Walla Walla Public Schools and the community to support the cause.

At issue is what members of the Educational Service Employees of College Place union say is an unbalanced wage scale for classified employees in the district. Such jobs include custodians, school nurse, teachers aides and food service staff.

That $2 billion, one-time allotment to schools came last summer when the state Supreme Court said Washington had not complied in fully funding public education since a 2012 court ruling requiring it to do so.

Teachers around the state joined together in saying McCleary’s tenets should have meant higher salaries for all staff this year, media reported.

“The 2018 Legislature approved another $1 billion for K-12 educator compensation, as ordered by the Supreme Court in November. That’s in addition to the $1 billion for educator salaries that lawmakers approved in 2017,” noted the Washington Education Association.

When College Place School District got its share of the pot, teachers there received a 10.5 percent salary increase, according to Jim Gow, who represents the College Place classified employees at WEA.

Classified folks got none of that, only the usual cost of living raise, Quick said.

“There is new money from the state allocated for salaries, for classified salaries, and we’re just asking for the same portion of that pot,” she said.

Current wages for classified staff start at $12 for a kitchen assistant to $20.39 for a school nurse; a five-step process over 15 years raises classified wages by about $3.

This month, Washington’s minimum wage became $12 per hour, up from $11.50. The rate reaches $13.50 next year. Classified wages were adjusted with January paychecks to reflect the change, said College Place Superintendent Tim Payne.

Furthering the frustration of classified staff is the fact that seven people in what are termed classified administration positions got raises this fall, Quick said.

Because those jobs — such as communications manager, executive assistant and transportation supervisor — don’t require certification, those employees are free to negotiate their own contracts with the district, Payne said today. The wage increases for those jobs averaged 9 percent, he said.

Inside Davis Elementary, during a board meeting packed with audience, classified employees took advantage of the public comment period to voice concerns. One woman said she has worked for the district for 20 years.

“I don’t make a living wage,” she said. “I like working with the kids, I have a heart for it, but I want to get my groceries, too.”

In turn, Quick assured the board the union members are supportive of the school district and are seeking a resolution that is fair to all. That said, she’s been to the negotiating table a number of times without resolution, she said.

Teaching assistants are at the bottom of the food chain and are unable to support their families at their pay level, Quick said.

“And they work the closest with the kids.”

The district’s pay scale discourages applicants for open jobs, she told the board.

“Davis and Sager (middle school) both lost custodians this year,” she said.

However, the good news is that College Place has “a substantial fund balance in the bank,” Quick said, adding that classified employees are simply asking for their fair share of the new money from the state.

The district, however, offered a 10.5 percent wage increase on Jan. 8, Payne said.

Quick said the offer had not been formally offered in writing, leaving her unsure of the district’s position.

The union is also asking for changes to the wage structure that would allow employees to reach the top pay tier sooner than 15 years, and offer a longevity bump in pay, Quick said today.

“We want to emphasize retention of employees. It’s hard to attract and retain, and that’s our driving force,” she said, adding that keeping good workers benefits students and the administration.

Payne said today he is optimistic resolution will soon be reached with the offer of an average of a 10.5 percent wage increase, a higher pay jump than classified employees saw in other districts.