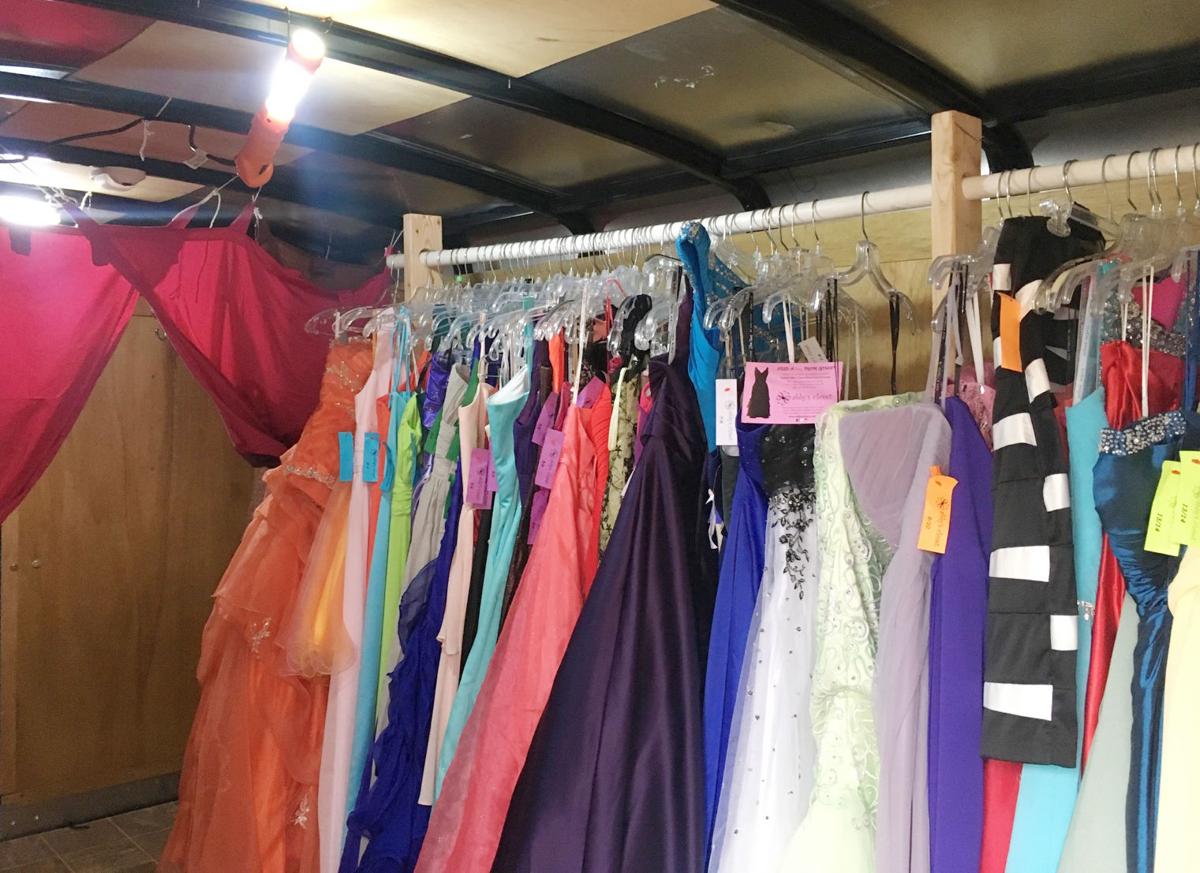 Christina Swafford and her family outfitted a utility trailer to create a mobile storefront and dressing room for Weston-McEwen prom-goers to shop among the 100 gowns donated by nonprofit Abby's Closet in Portland. 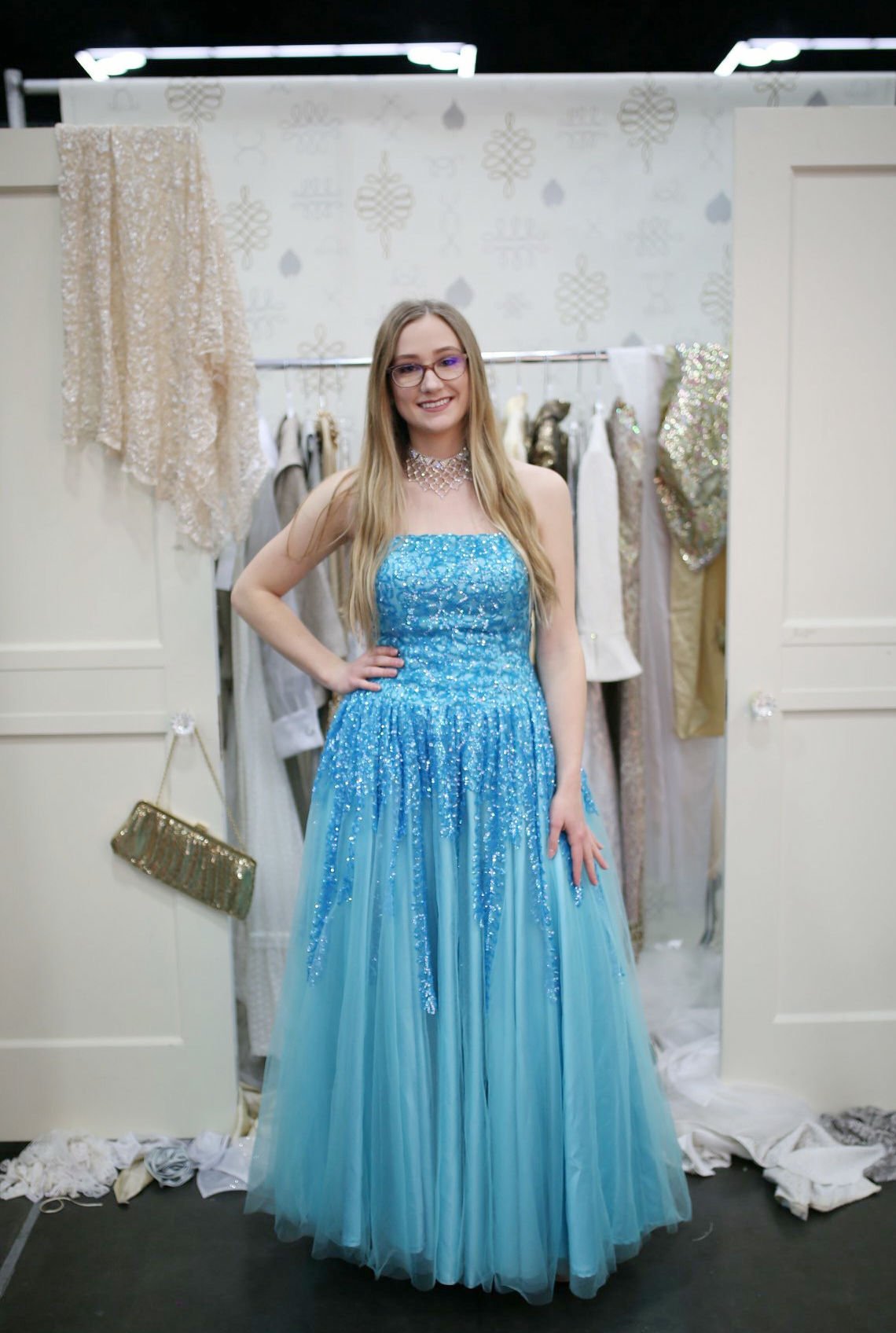 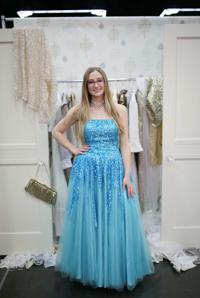 Christina Swafford, at the 2017 spring prom.

Christina Swafford and her family outfitted a utility trailer to create a mobile storefront and dressing room for Weston-McEwen prom-goers to shop among the 100 gowns donated by nonprofit Abby's Closet in Portland.

Christina Swafford, at the 2017 spring prom.

Weston-McEwen High School’s spring prom, “A Night to Sparkle,” did indeed sparkle, with glitter, glitz and glam lighting up Vert Auditorium in Pendleton.

There was tulle and lace, reams of silky satin, shimmery beads and tiny seed pearls.

There were sequins for days, and every girl who wanted to be was dressed to the nines.

This was exactly the dream Christina Swafford had been working toward for a long time.

“Going to prom is so important; it’s one of the biggest events of your high school years,” the Weston-McEwen senior said Friday.

“It’s a time for girls to really feel beautiful.”

Others see it the same way and wanted to lend a hand. Portland-based nonprofit Abby’s Closet this year chose Christina to receive its 2018 Dreams Scholarship award of $2,000.

The 18-year-old was selected based on her volunteer and school activities, including collecting Christmas gifts for veterans, helping in the Athena community, being varsity tennis captain and a National Honor Society member.

But what really caught the scholarship committee’s eye was Christina’s efforts to dress the young women of her high school.

Abby’s Closet was started in 2004 in, well, Abby Egland’s closet. When heading off to college, Abby wanted to make sure her favorite pink prom dress wouldn’t just collect dust. She recognized it still could bring joy to another girl or, as Abby said, “another chance to dance.”

Then Abby and her mom, Sally Egland, realized there must be legions of prom dresses tucked away in closets, and plenty of teens who would love the chance to use them.

Since then, the organization has hosted more than a decade of “Prom Gown Giveaways” for students from more than 250 schools in Oregon and Southwest Washington.

In her online search for scholarship money, Christina came across the Abby’s Closet website, marveling that its mission was such a close fit with her own.

“I investigated them on social media,” she said. “I read testimonials on their website. I fell in love with their message. They are doing what I do, on a small scale, on a very large scale.”

Abby’s Closet folks felt the same about Christina’s message — no matter the income or spot on the map, no girl should be deprived of going to prom for lack of a dress.

Christina’s own awareness came a few years ago when some friends said they could not afford prom attire. Fancy dresses can average about $200 each in this area, with some costing several hundred more, said Christina’s mom, Mindy Swafford.

Knowing what they did, the mother-daughter team began buying formal gowns here and there, off clearance racks and at yard sales. Christina loaned out her own prom dresses, as well, in the quest to address the need.

“There’s a big demographic here that doesn’t have the opportunity to go out and buy a dress, or travel to look for a dress,” Christina said.

“Or they have too much financial need in other places to put money in that one area.”

She wanted to do more, the student said, but never found a way to do so.

Abby’s Closet, however, is all about saying yes to the dress. The nonprofit has given away 20,000 gowns to date in furthering inclusion and confidence.

“The goal of Abby’s Closet is to make every participant feel special, beautiful, and confident,” the organization says.

When Christina went to Portland to receive the Abby’s Closet scholarships, she had the chance to talk about her community to board members. Co-founder Sally Egland was so touched, she offered 100 dresses to the Swaffords for Saturday’s prom.

The family, including dad, Capcare, hustled to transform a recreational-vehicle hauling trailer into a dress salon. Over spring break, the Swaffords laid flooring, installed clothing racks and put up curtains and mirrors. Then the trailer came to the high school for two days to serve the eager shoppers, Christina said.

There was a lot of excitement about all those sequins, she recalled Friday with a laugh.

“That prom dress is important,” she said. “Sometimes it might be the first gown they’ve ever worn.”

Christina will be off to Linfield College in Western Oregon in the fall, with plans to study Spanish and psychology. She hopes to become a clinical psychologist working with veterans and their families.

Mindy said Friday that her daughter’s prom outreach effort will be carried on, at least for the next few years.

“We’re trying to figure out next year how we can work with Abby’s Closet,” Minday said. “I’m willing to drive down to get gowns and distribute them to different schools. Then maybe a student can do it as a senior project.”

Mindy said she expects to be a part of Abby’s Closet mission in the future.

“I’ll make the trip to Portland, just to volunteer. It’s so wonderful, it’s so humbling.”