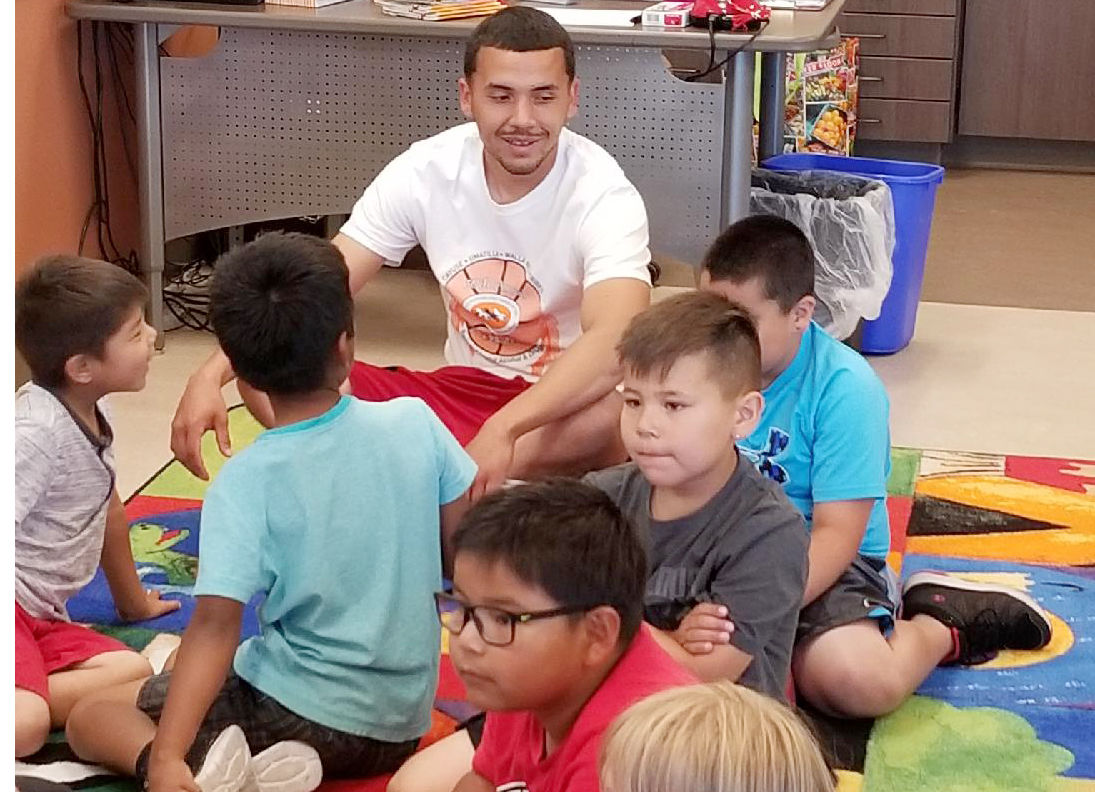 Leo Sportsman, center, is employed as an education support person in the Athena-Weston School District. Sportsman works in the district’s three schools as an advocate and liaison for students from the Confederated Tribes of the Umatilla Indian Reservation and their families as part of Oregon’s Tribal Attendance Pilot Project. 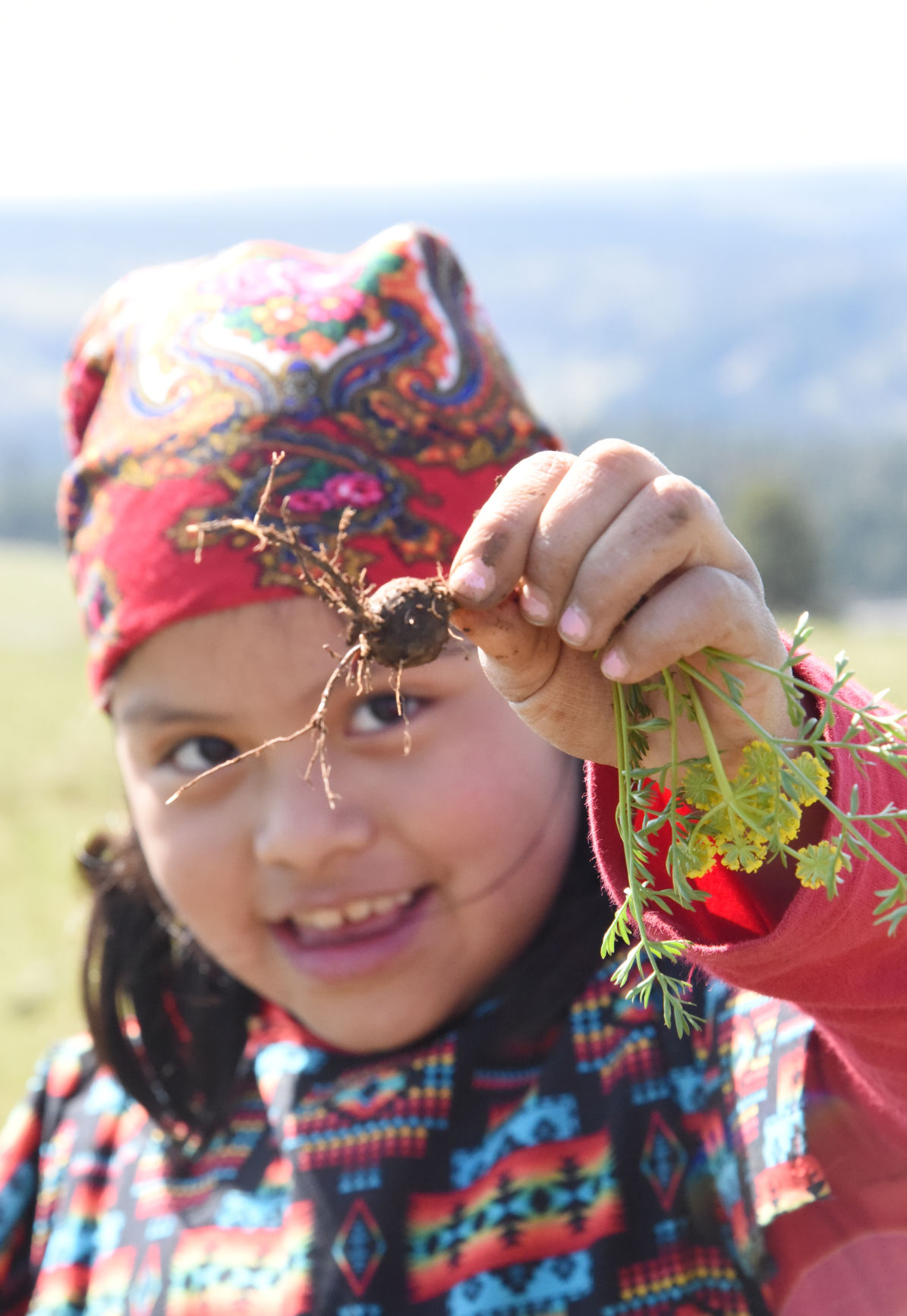 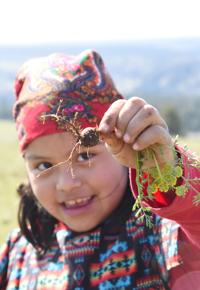 A young member of the Confederated Tribes of the Umatilla Indian Reservation learns the cultural value in digging for roots on a field trip for students. Such expeditions are part of a effort to include more culturally-responsive activities for Native American students, said Jill-Marie Gavin, a reporter with Confederated Umatilla Journal. Creating a relevant and cultural curriculum inside and outside of school is part of best practices to increase attendance and school performance, she said.

Leo Sportsman, center, is employed as an education support person in the Athena-Weston School District. Sportsman works in the district’s three schools as an advocate and liaison for students from the Confederated Tribes of the Umatilla Indian Reservation and their families as part of Oregon’s Tribal Attendance Pilot Project.

A young member of the Confederated Tribes of the Umatilla Indian Reservation learns the cultural value in digging for roots on a field trip for students. Such expeditions are part of a effort to include more culturally-responsive activities for Native American students, said Jill-Marie Gavin, a reporter with Confederated Umatilla Journal. Creating a relevant and cultural curriculum inside and outside of school is part of best practices to increase attendance and school performance, she said.

A member of the Puyallup Tribe of Indians, Sportsman grew up on the Warm Springs Indian Reservation in Central Oregon. After being taught in a tribal school on the reservation, he transferred to public school in nearby Madras in fourth grade.

It wasn’t a great place for an Indian kid to be, Sportsman recalled. Transitions between grades were difficult; most of the Madras teachers he encountered didn’t have a real grasp of tribal culture. Sportsman found himself feeling isolated and worried.

Even though he was far from home, being around people who understood Native American life and traditions allowed the middle-schooler to focus on academics. Sportsman’s grades rose to honor-roll level as his anxiety dropped; he could try new things knowing he had support, he said.

That’s the experience Sportsman, 25, brought to the Athena-Weston School District this spring when he became an education support person for students registered with the Confederated Tribes of the Umatilla Indian Reservation.

When school ended earlier this month, Sportsman was among those cheering to hear that kids from the reservation reached a 92 percent attendance rate in the district this year, the same overall attendance rate for all Athena-Weston students.

To appreciate that number means understanding the long road behind it, said Athena-Weston Superintendent Laure Quaresma.

“When we look at graduation rates, we look at things we can change,” she said.

Like school administrators across the state, Quaresma means concrete action and that means raising attendance numbers.

In 2015 Oregon was — and had been — in the lowest 20 states for school attendance; state lawmakers directed education officials to develop a statewide plan to address chronic absenteeism.

In addition, missing school on a regular basis has a disproportionate impact on certain populations, including Native American students, according to Oregon’s Department of Education.

Even before going to the drawing board for Oregon’s broader chronic absenteeism plan, the state recognized a need for a focus on Native American families.

According to Oregon’s Department of Education, a 2014 study revealed 33 percent of Native American students in the state met the definition of “chronically absent” — missing 10 percent or more of school days — compared to 19 percent of other student groups.

Those missed days equal missed educational and social opportunities, according to Oregon education experts. And the problem, tribal officials agree, has been difficult to turn around.

In Athena-Weston schools, however, one state effort is reaping positive numbers.

State funding was allocated to put community advocates like Sportsman into districts such as Athena-Weston, which serves about 60 students from the Umatilla Indian Reservation, according to officials.

The collaboration is intended to strengthen the links between Oregon tribes and school districts. Funding also financed a campaign touting the importance of attendance and provided technical support and training for family advocates, according to the state’s website.

For 2017-2019, the Oregon legislature budgeted $1.55 million to reduce chronic absenteeism of Native American students in nine school districts around the state.

According to a 2017 story by the Oregonian, however, the TAPP program is not yielding hoped-for results everywhere it’s deployed.

The newspaper reported that many of the schools given support to reduce chronic absenteeism saw those rates stay the same, or, in some cases, even get worse. While 10 schools included in the pilot project succeeded at reducing chronic absenteeism between the 2015-16 and 2016-17 school years, seven did not, according to attendance data from the Oregon Department of Education.

But from what Weston-McEwen High School Principal Jim Reger can see, TAPP’s money has been well spent in his district.

Students who are registered members of the Confederated Tribes of the Umatilla Indian Reservation can have support from Sportsman or other education coordinators at school, from once every so often to a daily basis, Reger said.

That help can mean coaching a child to wake up earlier to avoid being tardy, a supportive presence in the classroom, homework assistance, attendance monitoring or acting as a family liaison with school staff.

Reger said this year’s attendance goal for Athena-Weston Native American students was set at 85 percent by tribal leaders, a number that can be mitigated by any number of American Indian traditions.

“Such as picking berries, fishing, digging of roots or a more extended funeral process,” he said. “We don’t punish these kids for missing school for those things. Some kids miss more than others, but when I look at these students, they do really well.”

Lloyd Commander is the director of youth and recreation services for the Confederated Tribes, a job he’s had since 2010. He oversees the TAPP program on and off the reservation.

His staff of seven education coordinators are stationed in three school districts, and they work with families as well as individual students.

It’s not unusual for American Indian parents and grandparents everywhere to have experienced cultural barriers during their own school years, including discrimination and a forced separation from their families via boarding schools, Commander said.

“This goes back 100 years … we call it ‘historic trauma.’ That’s been an underlying problem,” he explained.

For a long time, non-Native school districts didn’t honor or excuse tribal students for the traditional Native funerals, which are communitywide affairs that last from three days to a week, Commander said.

“That affects their attendance, but in our culture it is so important to honor our loved one,” he said.

Special education has been another area of conflict between Native families and school districts, he noted.

Commander said that today, tribes and school districts are much more in sync. His staffers supplement their in-classroom work with extracurricular activities, like helping students research their own tribe’s ceremonies and history, and presenting lessons — such as learning some engineering by assembling a BMX bike, flying drones and building bottle rockets.

As well, the district and Commander’s office share the work on issues such as busing, he said.

“If kids live outside of town, they are almost on the bus for two hours a day,” he said. “Then they get to school, and they are tired. So we have been working with the district and the bus company to minimize that.”

His office hosts monthly meetings to teach parents how to work with a school district and how to advocate for their children, Commander said.

The tribe also requires school districts serving its students to hold at least one board meeting a year on the reservation. Parents often attend that session, and students with the Confederated Tribes are recognized, he said.

The work of Sportsman and other coordinators is invaluable is sending the message to families that education is important to the tribe, Commander noted.

The success of the TAPP program in any school district is dependent on relationships between the education coordinators and their students, Sportsman said.

That’s something he can wholeheartedly offer. “My objective is to try and help them realize the potential they have, that there is someone there and they have help,” he said. “I don’t want then to feel alone. I want them to feel comfortable enough to ask for help.”

Sportsman said he also wants the opposite.