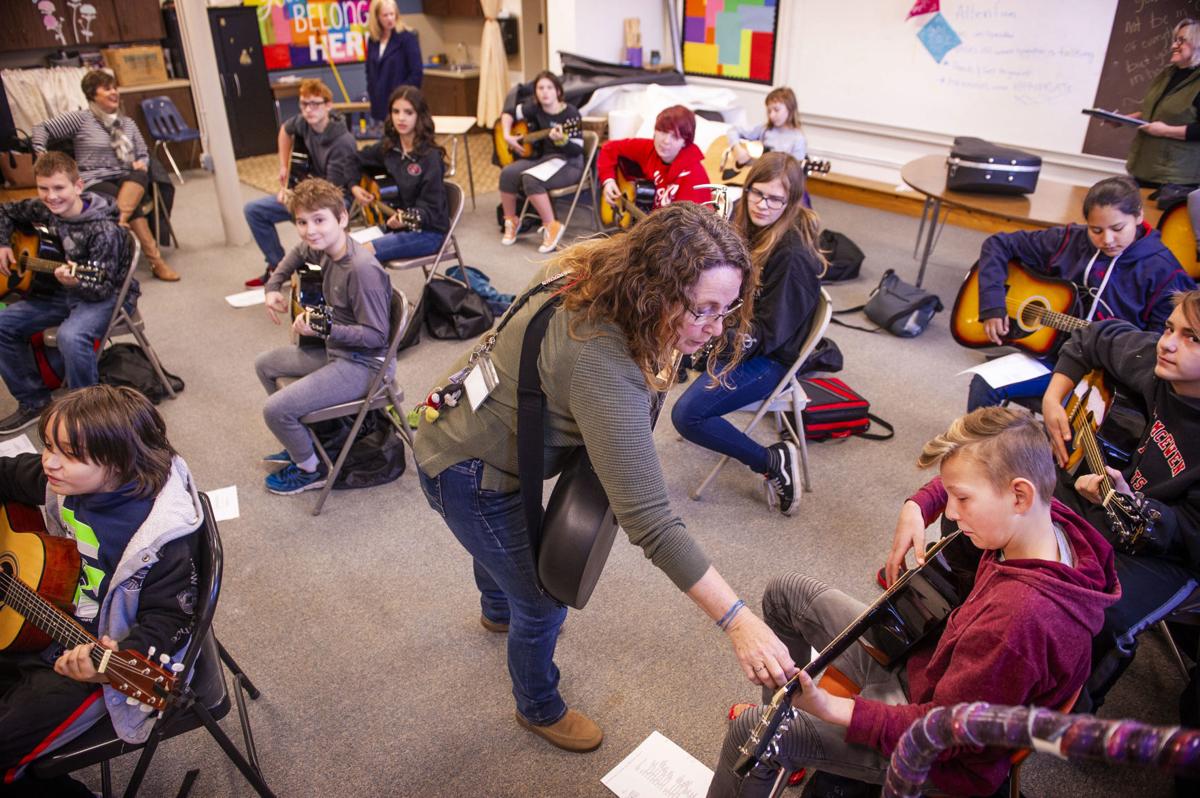 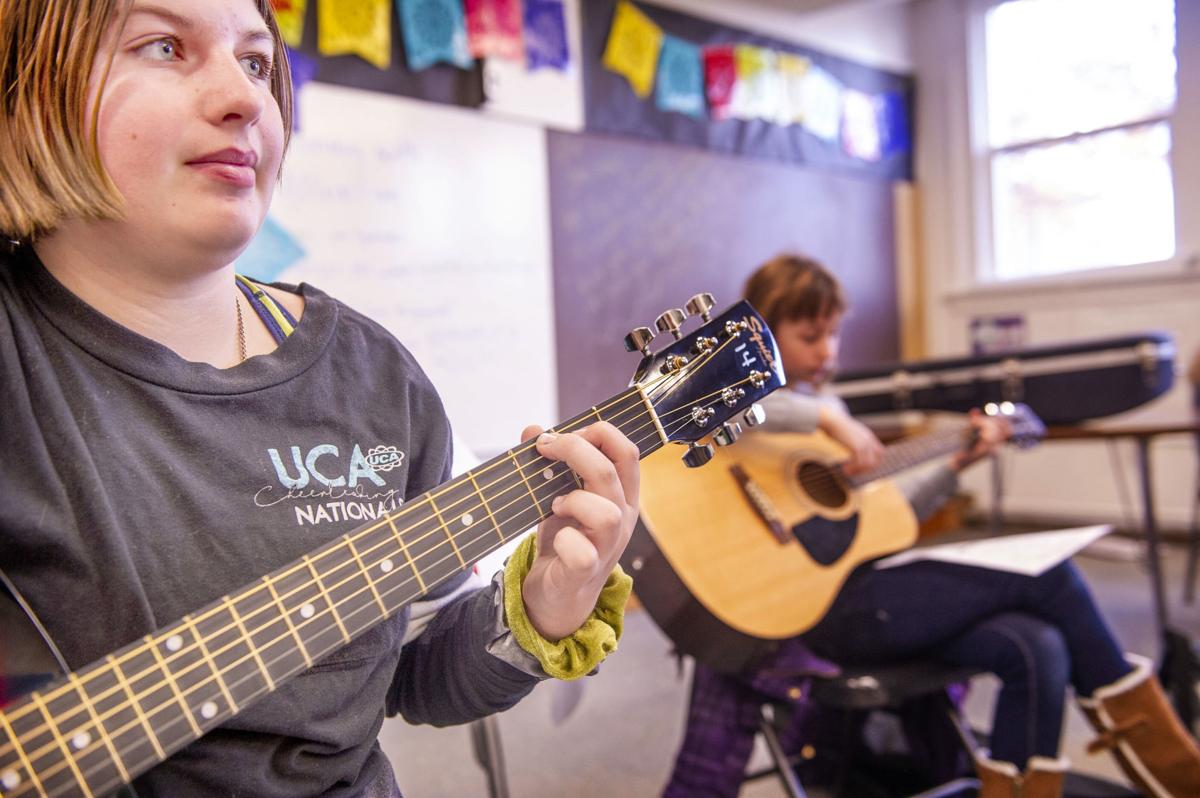 Seventh-grader Kadence Stiffler works on a G chord during a Friday guitar session in Weston. 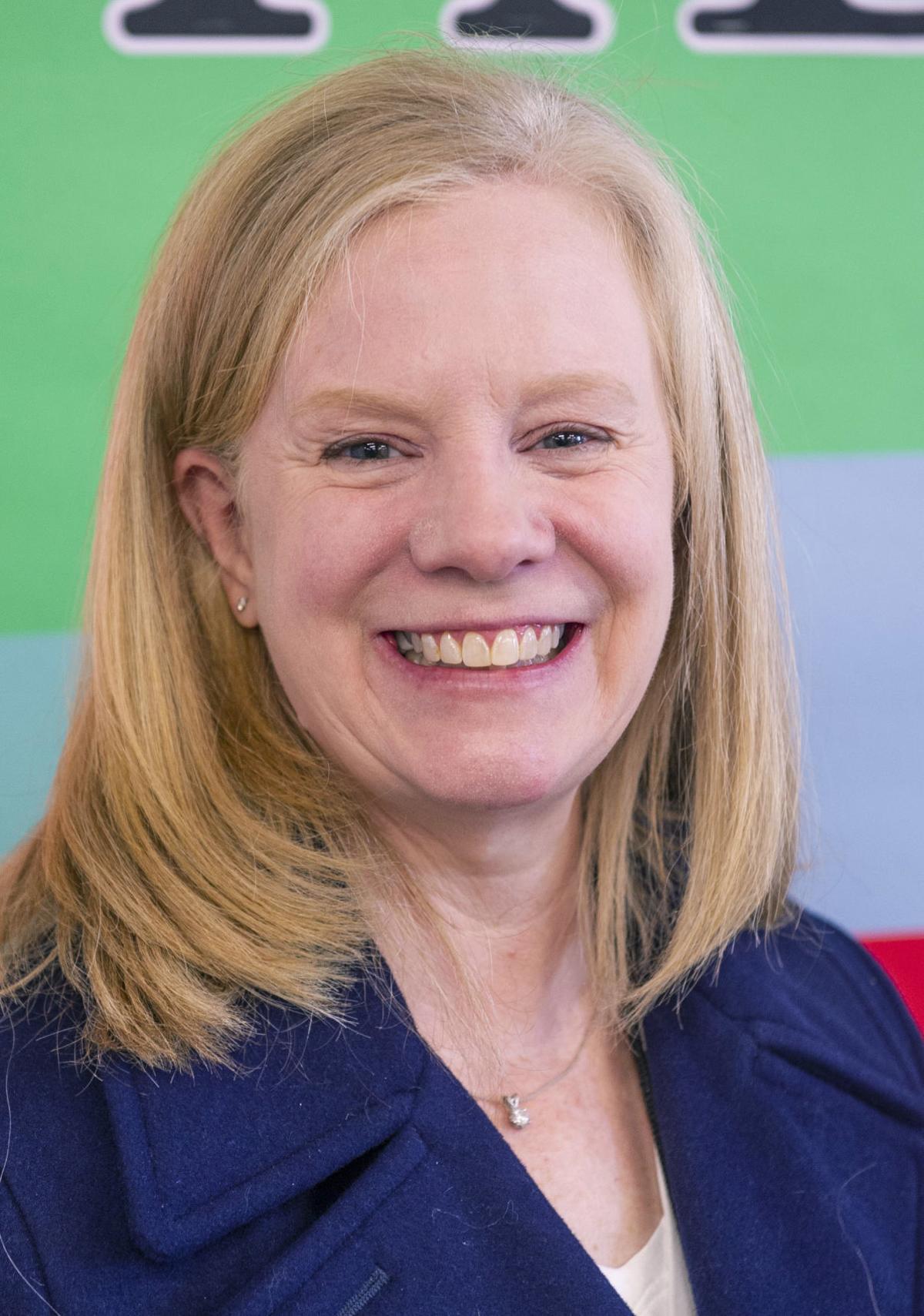 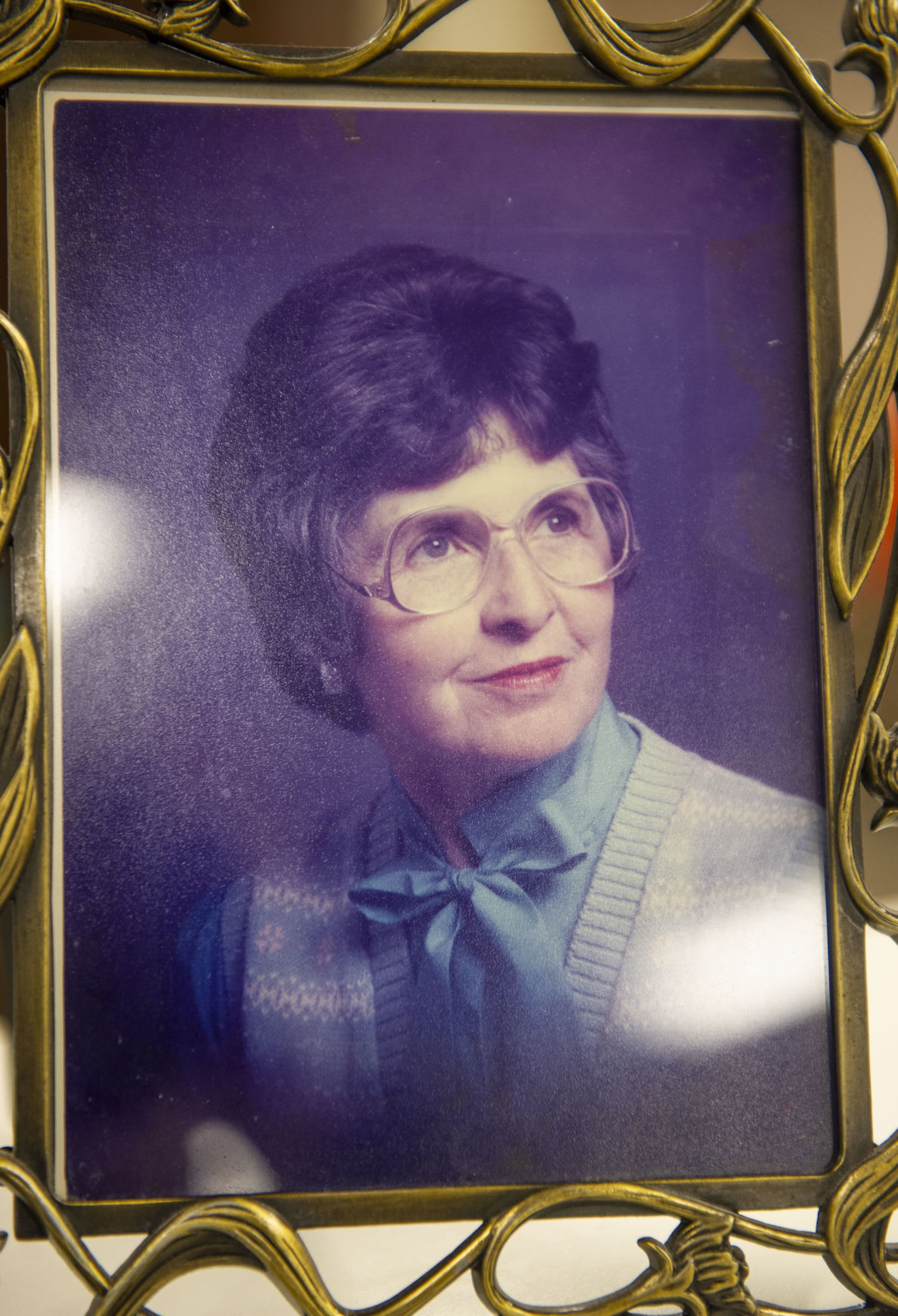 Barb Palmer brought a photo of her mother, Althadel Johns Beamer, to help explain to students why and how they have new guitars to learn on. 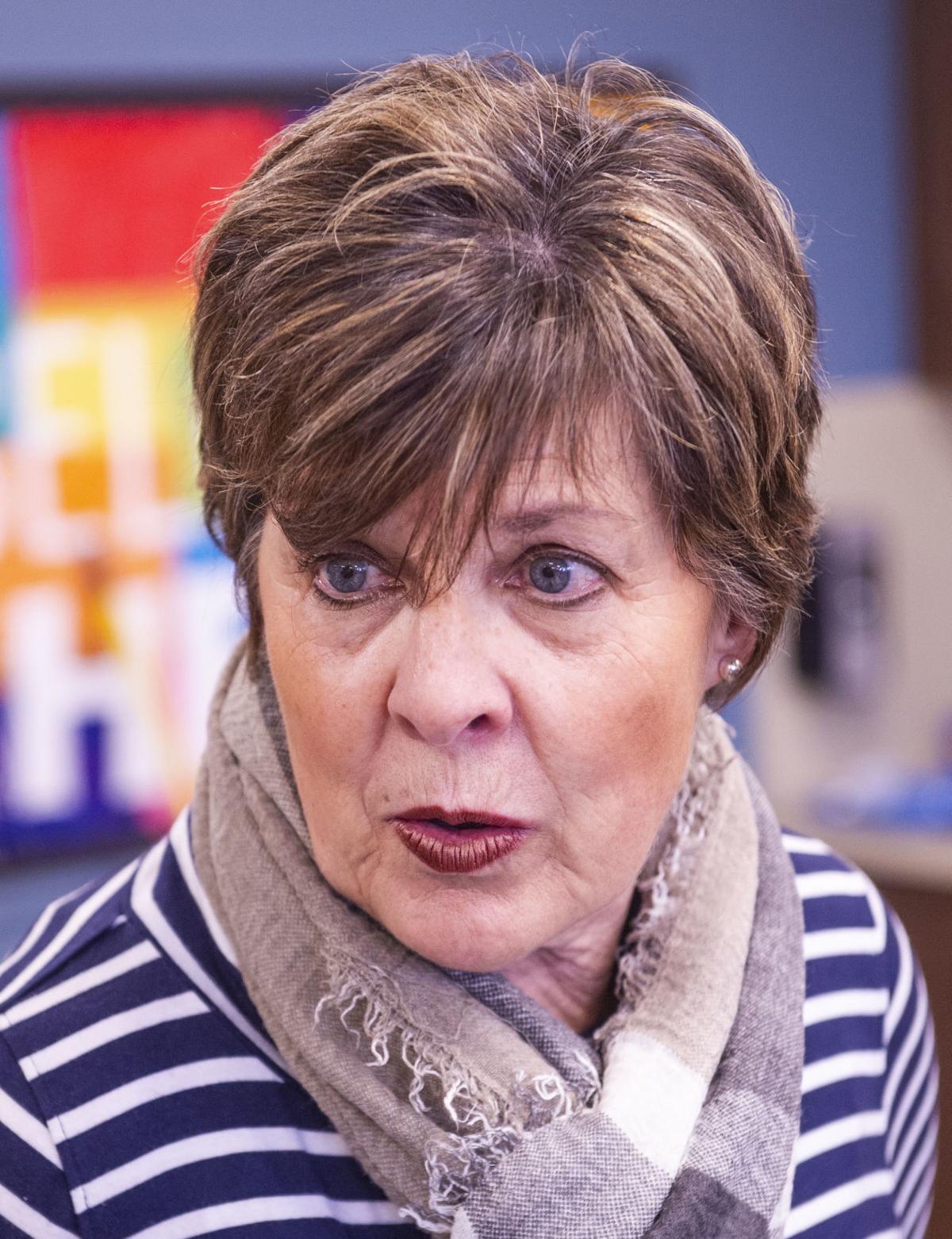 Seventh-grader Kadence Stiffler works on a G chord during a Friday guitar session in Weston.

Barb Palmer brought a photo of her mother, Althadel Johns Beamer, to help explain to students why and how they have new guitars to learn on.

The Weston Middle School head was listening in on one of three guitar classes offered each Friday, a first at the school this year.

Led by guitarist Kolleen Bennett, about a dozen sixth-, seventh- and eighth-graders hesitantly strummed guitars while studying Bennett’s own finger placement as she announced each upcoming chord in Bobby McFerrin’s cheery 1988 hit.

That the school, which is part of the Athena-Weston School District, can offer the opportunity to learn the instrument is thanks to the generosity of another adult in the room.

Barbara Palmer was nodding gently to the somewhat disjointed song. A framed photo of her mother sat nearby.

“This is exactly what I had in mind,” she told Vescio with a beaming smile. “Mom would have loved this. She would have just loved it.”

Palmer’s mother was Athena native Althadel Johns Beamer, and Beamer loved everything there is to love about music, her daughter recounted.

“My mom was born with music.”

Indeed, Beamer would become legendary in her hometown for that gift and others she bestowed upon her community.

Born in 1927, Beamer went through the local school system before heading to the University of Oregon. There she graduated with a degree in music and brought her talent back home to lead choirs and other musical groups, Palmer said.

“She was always called on and asked to play weddings and funerals. She was able to play by ear. I was always amazed by that gift.”

Her mother, too, was widely known for her kindness, empathy and wisdom.

“She always looked to the good,” Palmer said. “In her outreach to Athena, she had a Christian message of loving one another. She was true to her values.”

“It was very sad, the way she died. But they say the hearing goes last,” she said. “We would take a keyboard in to her room and play.”

Through Blue Mountain Community Foundation, the Beamer family, including Althadel’s husband, Larry, established a scholarship in memory of everything their mother and wife cared about.

It’s important the yearly distribution of the fund’s endowment mirror both a love of music and top-notch character, Palmer said.

Over the years, the scholarship — while not a grand amount — has helped a single beneficiary or bandof musicians, such as Athena-Weston School District’s Pipes and Drums band. The money has paid for music-related goods and travel.

And this year, by happenstance, guitars.

Vescio said she meets with seventh-graders at the end of every school year, to check in on how their middle school experience is shaping up.

“One question I always ask is what electives they’d like on Fridays. The biggest answer last year was a guitar class,” Vescio said.

That sounded great, but where would that many guitars come from, she wondered.

Perhaps Beamer’s spirit had something to do with what came next.

“Within two days, Barb called. She said, ‘I have this money from mom’s foundation, and it has to go to music. Do you have any need for it?’”

Thus $1,500 and 13 Fender starter guitars later, Bennett is getting to deploy her own gift of music on Fridays.

“I love music, and I love sharing something that’s going to make a difference in someone’s life,” she said. “Music can become a lifelong tool — when the world gets a little heavy, I can turn to my piano or I can turn to my guitar.

Bennett continued: “Not like algebra or a dangling participle, a guitar is still something I can pick up at 61.”

Whether a Weston Middle School student becomes fluent in guitar or not, passing on a love of song in Beamer’s name is completely fitting, Bennett added, noting she also benefited from Beamer’s kind heart and musicianship.

“She’s a part of my history ... When I say Althadel was Athena’s ‘welcome wagon,’ I really mean it. She had an amazing heart for people.”

Bennett gives credit to Vescio for finding ways to keep music in the school curriculum despite budget cuts and test-heavy schedules.

Her mother would have approved of all of this, Palmer said with a wave toward youngsters bent over the strings.

“This gives them an opportunity to excel in an area ... maybe they’re not natural athletes or ‘A’ students. My mother would love the harmony of this, the racial, economical and intelligence diversity.”

Vescio and Palmer are looking for a way to add to the school’s guitar cache, so students can check out a guitar for practice at home. For more information on their effort, contact Blue Mountain Community Foundation at 509-529-4371 or bluemountainfoundation.org.