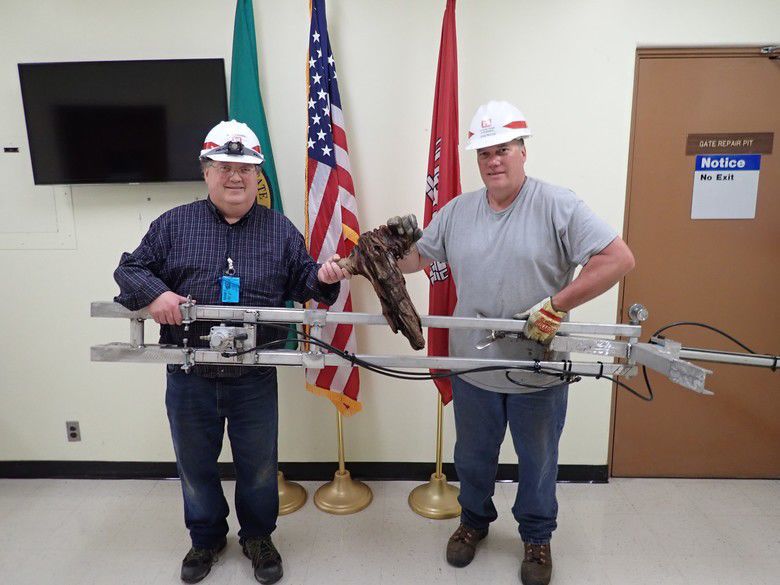 Jay Haugen and Kreg Buryta hold up their orifice debris plunger device after a successful test May 5. 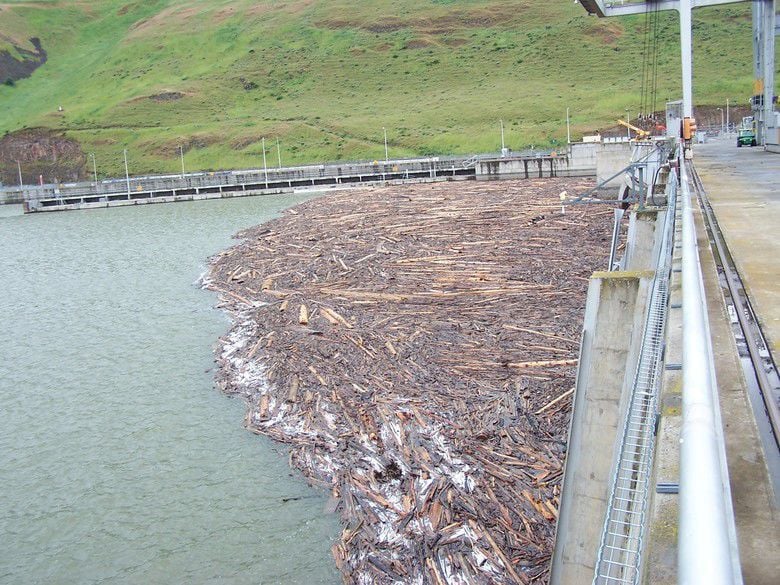 Debris built up in the forebay of Little Goose Lock and Dam, 2017.

Jay Haugen and Kreg Buryta hold up their orifice debris plunger device after a successful test May 5.

Debris built up in the forebay of Little Goose Lock and Dam, 2017.

A new debris plunger, created by employees of the U.S. Army Corps of Engineers at Little Goose Lock and Dam, prevents the loss of more salmon and steelhead along the Snake River while boosting energy production, the Corps announced.

The design of the “orifice debris plunger” by mechanical engineering technician Jay Haugen and maintenance worker Kreg Buryta solves a yearslong challenge of clearing out debris in the dam’s system.

The problem began with the failure in 2014 of the trash shear boom that had previously served as a barrier against logs, trash and other debris.

After that, detritus moving downriver accumulated in the immediate forebay, directly upstream of the turbines, according to the Corps.

It was exacerbated in the high runoff years of 2017 and 2018, said Scott St John, the Corps’ supervisory fish biologist at Little Goose.

Plugs in the juvenile fish channel continued, even after installation of the new trash shear boom and boat barrier in 2018.

Concerned with impacts to fish, the Corps said, Haugen and Buryta set out to design and fabricate a tool that could help.

The design used a pneumatic cylinder left over from Passive Integrated Transponder tag gate maintenance and sections of scrap aluminum, according to the release. Haugen took measurements and drew up the design, which was given to Buryta for fabrication.

The tool was successfully used May 5, after modifications and tests, to remove a blockage.

Work leader Ronald Ashley, who has since retired, maintenance worker Matthew Hutchens and engineering technician Matthew Flanagan, assisted with design, fabrication and testing, according to the release.