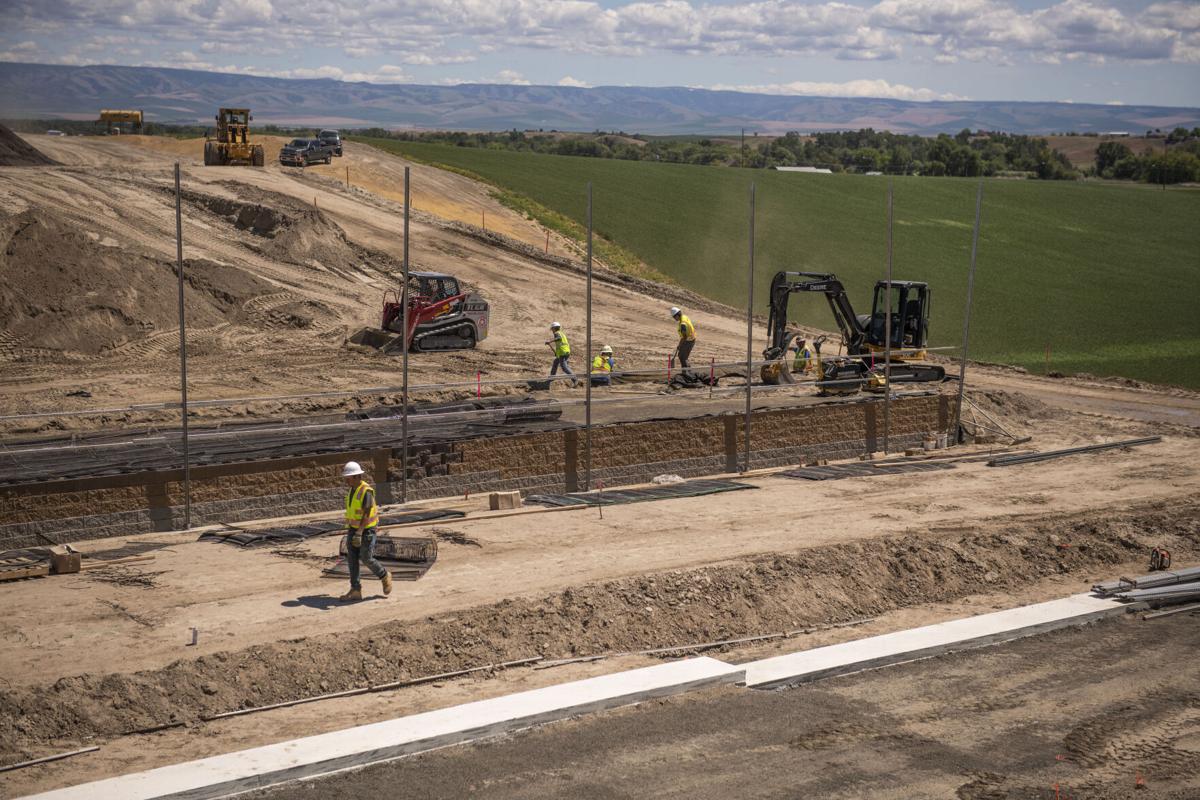 Road crews work on a U.S. Highway 12 overpass on May 26, 2021, just north of the Waterbrook wine facility, that will allow farm traffic to cross under the new roadway. Highways across the state will benefit from the recently passed Infrastructure Investment and Jobs Act. 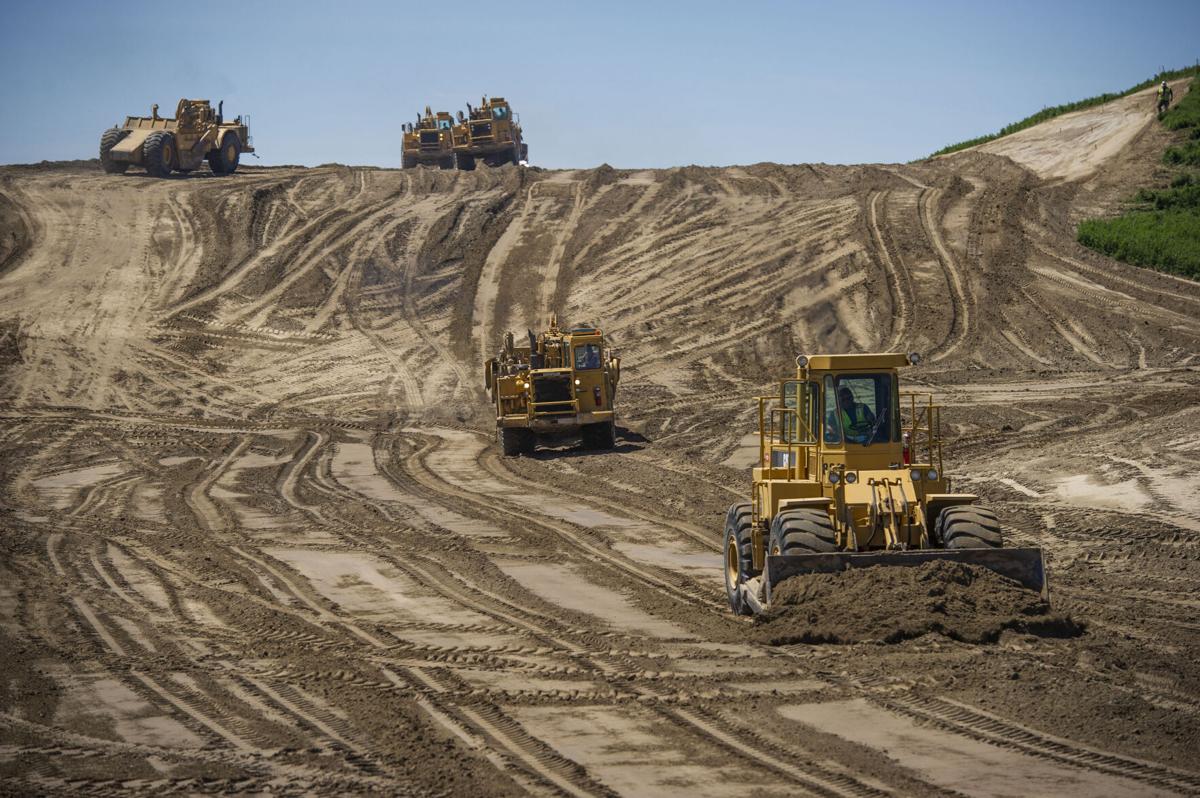 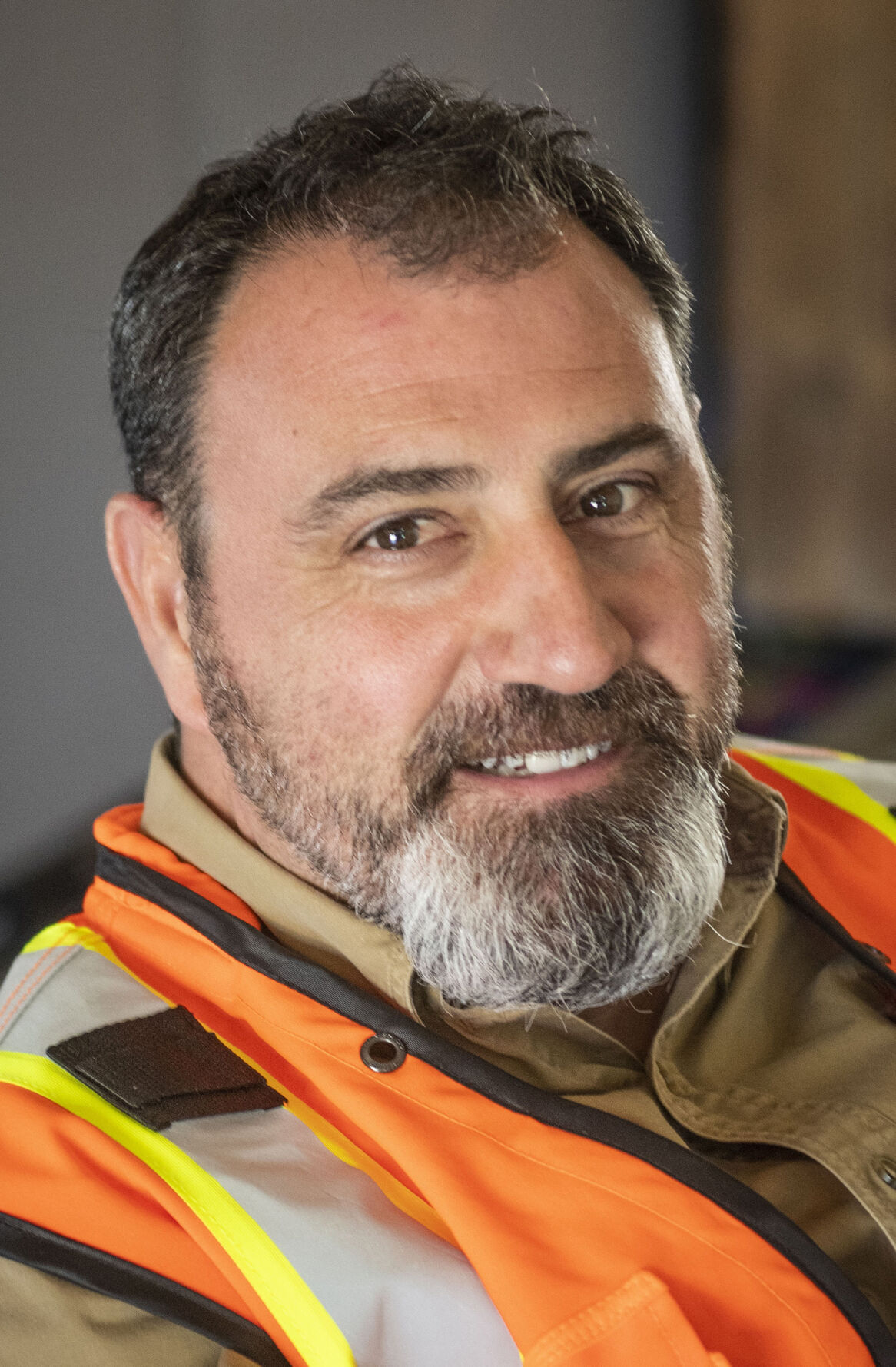 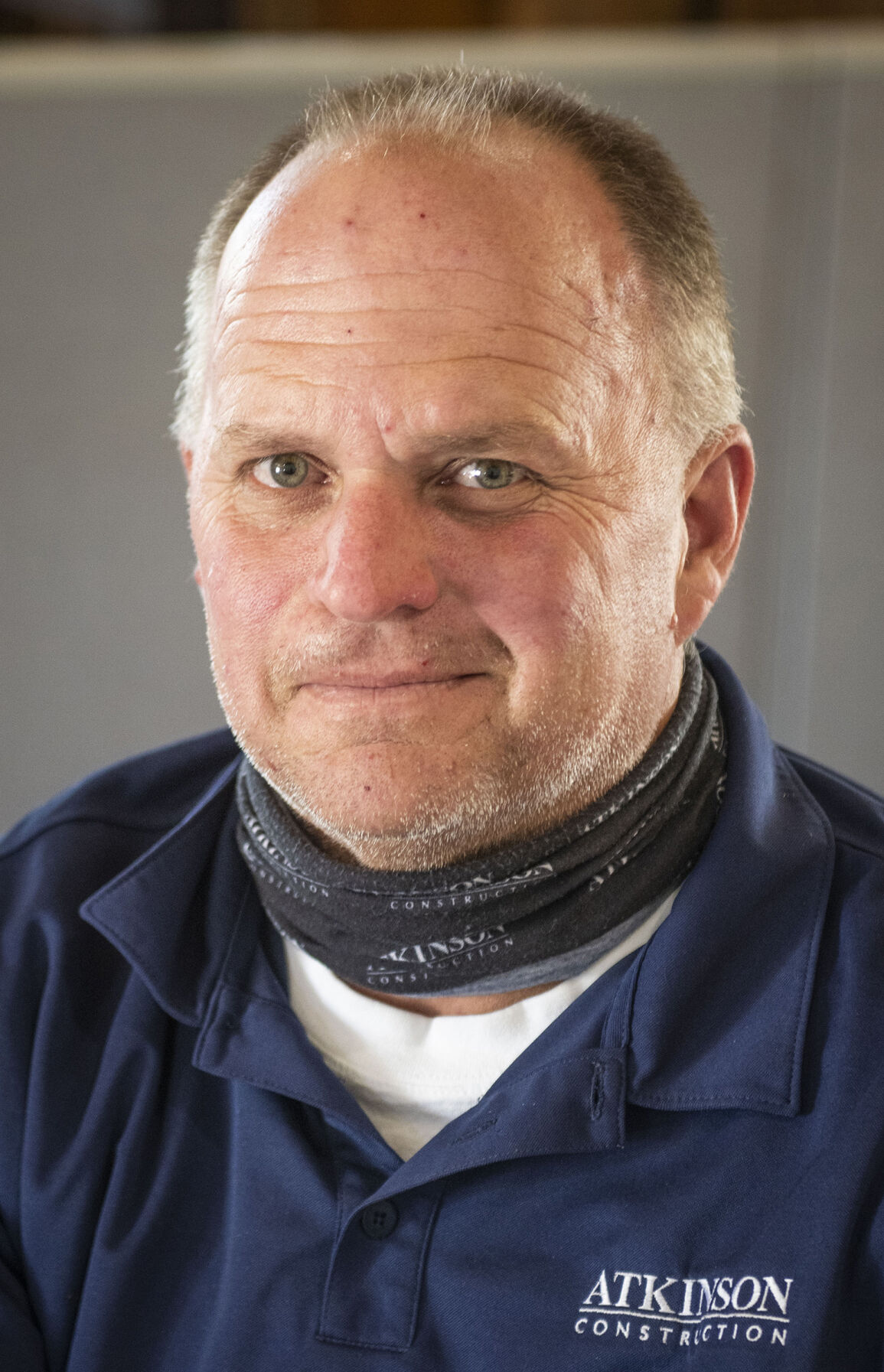 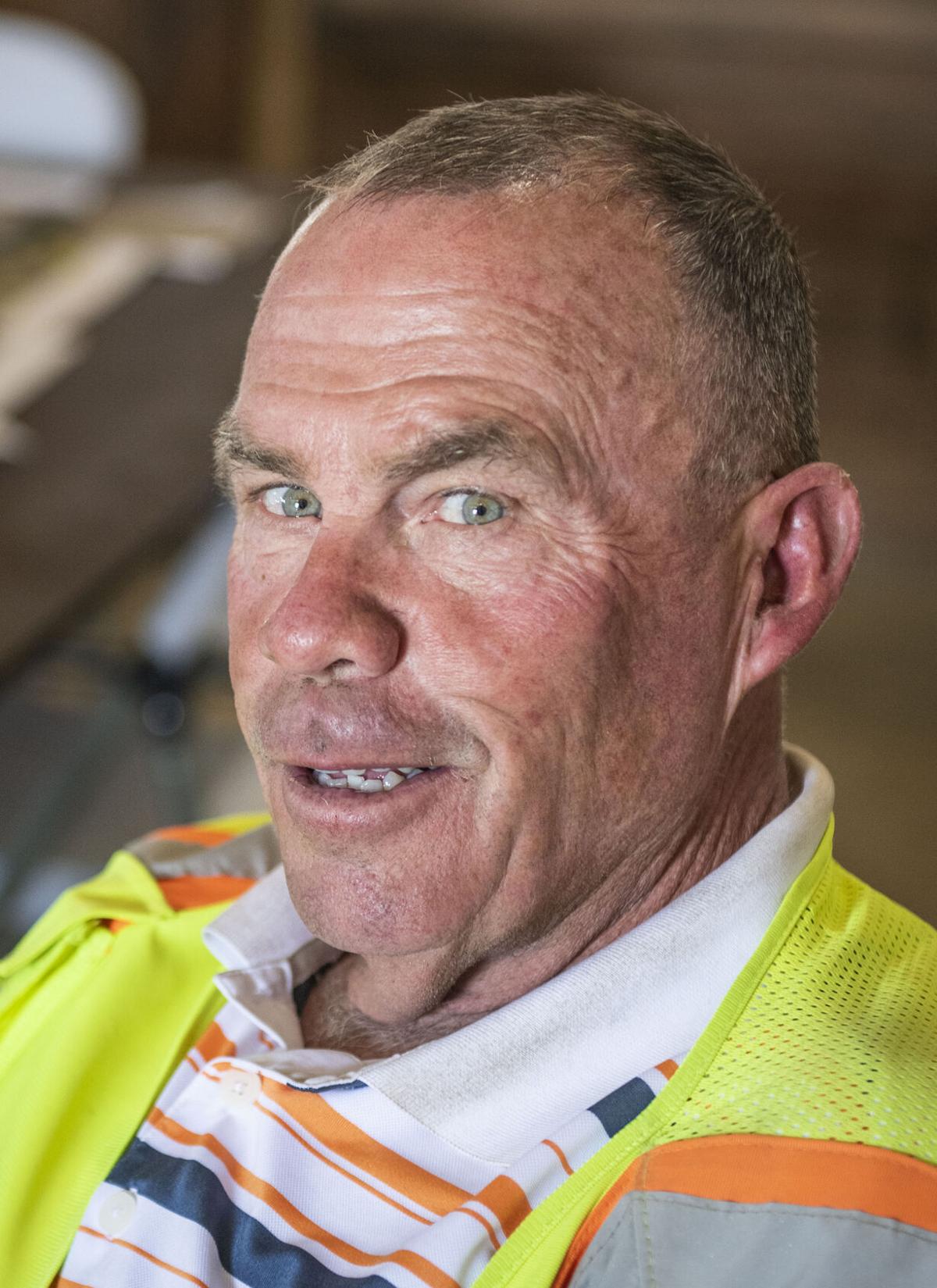 Drivers may notice work underway on the hilltops along U.S. Highway 12 near Walla Walla as crews move dirt to make way for the next phase of the $161.2 million project — four lanes connecting Frenchtown to Nine Mile Hill.

Workers are cutting the high spots and taking them to the low spots to build an even grade, said Matt Rugh, construction manager from Atkinson Construction, the general contractor on the project scheduled for completion by summer 2023.

Since March 8, crews have moved over 520,000 yards of dirt, closer to reaching their 2 million yard mark and bringing them to 25% completion of the earthworks for the project.

Overall, the project is 11 miles long and runs parallel to the existing highway. It includes diamond interchanges at both Nine Mile Hill, near Touchet, and Lower Dry Creek, near Lowden, enabling traffic to merge on and off the highway instead of waiting to make a right turn.

“Since I’ve been out here, I’ve noticed how dangerous the existing (Highway) 12 can be,” Rugh said. “So being able to build something that will make things a whole lot safer that has that impact on the traffic, on the communities to make the travel ways that they drive every day a whole lot safer … having that type of impact is pretty neat.”

Rugh has worked for Atkinson Construction for 14 years and is originally from Ellensburg, Washington. Currently, he lives in Sammamish, Washington, but relocated here for the project.

He said it is great to make it a safer highway for the community, for people working in agriculture and for the local communities using these roads every day.

Atkinson Construction welcomes the public to come in and ask questions, make comments or address concerns. They set up an office in Touchet at 16560 W. Highway 12, open 8 a.m.-3:30 p.m. Monday through Friday.

Getting it done faster

Apollo Construction, the general contractor on Phase 6 of the U.S. Highway 12 project — the last completed phase that brought four lanes from Frenchtown to Walla Walla, is subcontracted for Phase 7.

This crew will do the earthworks and drainage, the project survey, replace all the “retaining walls” for the bridges and do the surfacing on top of the road before they start laying down asphalt.

This means the general contractor designs and builds the highway. It gives flexibility to the contractor to make some changes in the designs while undergoing construction and does not lock the designs into place.

“It’s our design, with WSDOT’s input and approval. We design it, submit it to WSDOT for approval, they approve it, and then we go build it,” Rugh said.

They are currently about 95% complete with the design, finishing up the bridge design that will carry traffic over the Touchet River.

With this contract, they can continually design the project while constructing the parts where the design is complete, which allowed them to start the project sooner.

Henke spent 28 years at the state Department of Transportation in quality control management, overseeing hundreds of projects in the state and millions of dollars in projects.

He worked on the Interstate-90 Snoqualmie Pass East project, where they added three lanes in each direction under I-90 traffic.

This is his first project as an Atkinson Construction employee and his third time working with the company — the others while employed with the state.

Henke said, “You have a little more freedom for design as a contractor to design your thoughts... We try to aesthetically match everything that’s been done, for sure, but I think contractors are a little bit more well versed in putting the work on the ground because they have done it.”

He said WSDOT oversees them to make sure they are following the required process.

He said the difference between the design-build and the bid-build is the ability for the contractor to give the public a better product because, with their knowledge and expertise, how the contractor orchestrates the job, and it being their design, they can still make changes to improve the project.

“Phase 6 went well, and it was a good job, but the state gave us the plans for that job, and you go build it. So if there’s some issues with the plans or whatever, we still gotta keep just building it,” he said.

On Phase 6, those plans were locked in, he said.

Henke said, “What I see is that the design-build helps the contractor manage risk. Where if you go into a bid-build job, you kind of have to bid risk and sometimes that elevates prices.”

He said in a design-build, crews can manage risk for the whole job and keep costs down for taxpayers.

“Anywhere that we can save money obviously makes Atkinson money, and it lowers our costs in the end for the state.”

He said some things that Apollo’s team brought to Atkinson’s team from Phase 6 helped them nail this bid down.

Many wheat, corn and alfalfa farmers agreed to sell some land to the state for the highway project.

“We’re impacting a lot of farmers and cutting across their farms they’ve farmed for years. It’s a big deal for them, so we try to see things their way when we’re out there cutting through their fields and such,” O’Neill said.

Henke said some of the farmers are third- and fourth-generation farmers.

WSDOT picked the highway route and then negotiated the property with all the different farm owners for the acreages they needed to build the road, O’Neill said.

One structure, a vacant building, will be demolished for the project.

Part of the project was getting the farmers’ old infrastructures fixed because they will be permanent under the new road.

They have water on both sides of the right of way now, so they had to have a new piping system we put in, O’Neill said.

Henke said the highway would help farmers get their food to market more efficiently.

Completing the corridor is expected to improve travel time and give commercial trucks, which make are about 12% of traffic on Highway 12, improved access to nearby Port of Walla Walla facilities.

Additionally, the four-lane highway will reduce the risk of crashes by having fewer intersections on Highway 12 while separating opposing traffic with a median, according to WSDOT.

The project will reduce conflicts between passenger vehicles and trucks carrying goods. Intersections with county roads will allow safer access to and from the new highway.

The estimated project cost is $161.2 million.

Crews are moving dirt to make way for the next phase of the U.S. Highway 12 — four lanes connecting Nine Mile Hill to Frenchtown.