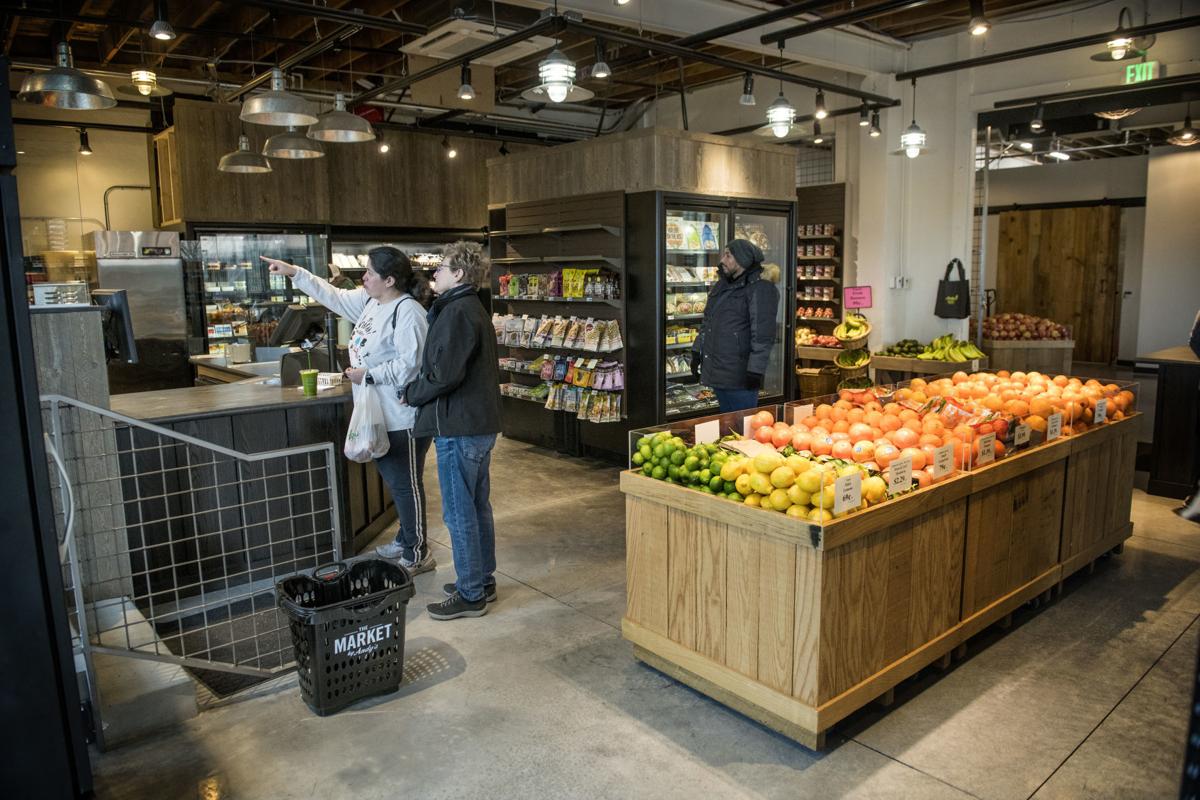 Customers order from the juice and smoothie bar at The Market by Andy’s, which opened for business Wednesday in downtown Walla Walla. 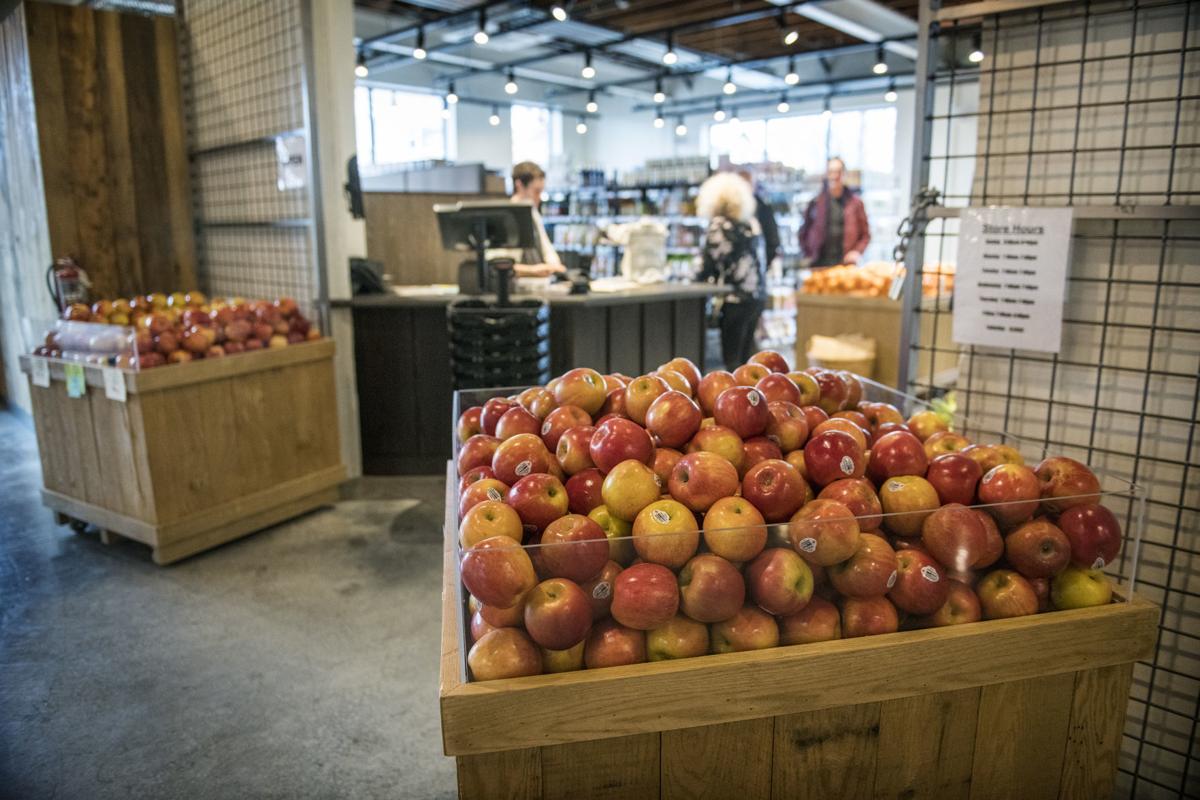 Bins of fresh apples mark the entrance at The Market by Andy’s. The new location near downtown Walla Walla will match prices at the College Place location. Everything offered in the store ads will be at both spots. 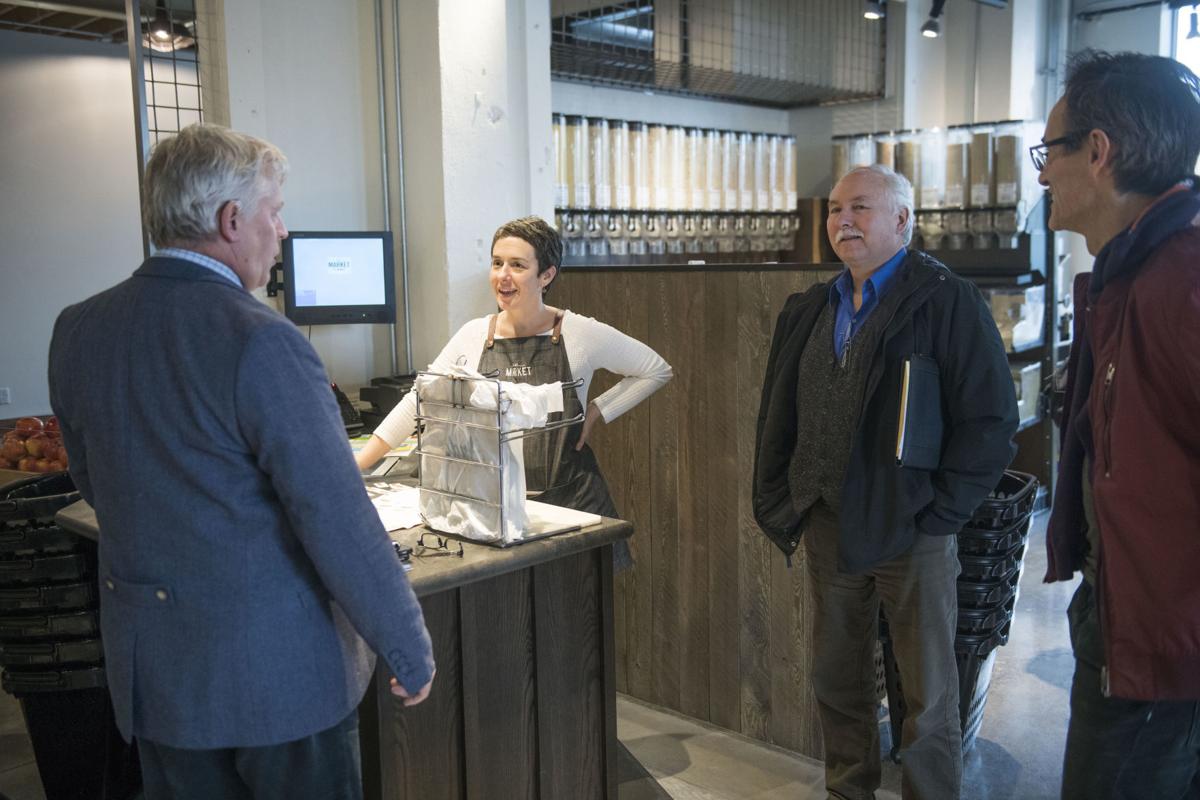 Vicki Zanes, granddaughter of Andy’s Market founders, chats during the opening of the store’s new location in downtown Walla Walla.

Customers order from the juice and smoothie bar at The Market by Andy’s, which opened for business Wednesday in downtown Walla Walla.

Bins of fresh apples mark the entrance at The Market by Andy’s. The new location near downtown Walla Walla will match prices at the College Place location. Everything offered in the store ads will be at both spots.

Vicki Zanes, granddaughter of Andy’s Market founders, chats during the opening of the store’s new location in downtown Walla Walla.

The opening of The Market by Andy’s in downtown Walla Walla somehow marked the start of a new era and also a journey back in time all at once Wednesday.

The newest tenant at The Showroom on Colville made its debut with a steady flow of customers dropping in for the fresh produce, bulk foods, staple grocery items and a new smoothie and juice bar.

The store is a satellite location for the more than 50-year-old Andy’s Market in College Place. This is the first of many big changes on the horizon for the business, said Vicki Zanes, granddaughter of the operation’s late founders.

It also hearkens back to the business’s roots: a 1,500-square-foot location on College Avenue.

The late Walter and DeLaine Anderson got into the business after his career as a contractor in 1968, when they bought the store known as Ed’s Market. The store was the foundation for Andy’s Market, which moved to 1117 S. College Ave. and grew into a destination for health-centric shopping for the Walla Walla Valley.

The new location in Walla Walla is the same size as the original spot, Zanes said.

“It gives me goose bumps just talking about it,” she said Wednesday.

“It’s pretty special to get to do this, standing on the shoulders of my grandparents.”

For Walla Walla, the location diversifies the offerings downtown, adding an independent and established grocer with a heart for farm fresh goods and a healthful mindset rooted in Seventh-day Adventist values.

A lot behind The Showroom at Rose and Colville streets is expected to help accommodate traffic coming in. But the proximity to downtown’s commercial district and surrounding neighborhoods drew loads of people on foot Wednesday.

Longtime Andy’s customers made the trip to see the new digs, and Zanes knew many by name and even by favorite product.

“This will be such a great thing for visitors, too,” said Ron Williams, CEO of destination marketing organization Visit Walla Walla as he purchased his favorite rice milk.

Although a fraction of the size of the flagship store, The Market by Andy’s is lined with selections of some of its most in-demand items. Its bulk bins were stocked with an array of goods — eight varieties of oats, cornmeal in four different textures granola mixes of all kinds, and flour varieties on their way.

A large bin of oranges greeted customers walking in through the concourse connecting The Showroom’s growing cluster of tenants. Prices on all of the items are the same as the original Andy’s, which is already developing a variety of nicknames (Big Andy’s, the Mothership, etc.).

Zanes said everything offered in the weekly ads for the store online and in print will be available at the same prices at both locations.

How the new location will affect traffic flow at the College Place store remains to be seen. The spot will certainly offer some decompression, Zanes said.

“We are also hoping to introduce people who have never been to Andy’s before,” she said.

Based on the number of folks walking through the aisles who already know Zanes, it’s hard to imagine many people aren’t familiar with the business.

By early afternoon, Zanes had already heard from one longtime customer who had made a list of all the things she typically purchases that are not already stocked at the Walla Walla location. And chances are good, Zanes will bring those in.

“Being an independent grocery store, we can do whatever we want,” she said. “We have the ability to experiment with products and items.”

About 10 employees will cycle through the store in a full day’s operation. The number helps maintain the personalized service and presentation for which Andy’s is known.

“Food is high-maintenance,” Zanes explained. “Rotation is super important.” Displays must be kept fresh and stocked, she said.

Expansion for Andy’s had long been in the works. Owners previously explored the idea of a second store at Walla Walla Town Center that ultimately didn’t take place.

Plans for renovation of the main store had been in progress when space at The Showroom became available.

“A lot of this was just the opportunity presenting itself,” Zanes said.

Renovation plans in College Place are still on the table. That undertaking is expected to begin in a year. Meanwhile, as the new location gets its start, Zanes said the business’s online shopping experience is next for a major overhaul.

“We were in the process of that when this came up,” she said.

As with all development plans for the business, the input of employees and family owners/operators is behind the vision.

“It’s a team effort,” she said. “And we have the best in the business.”