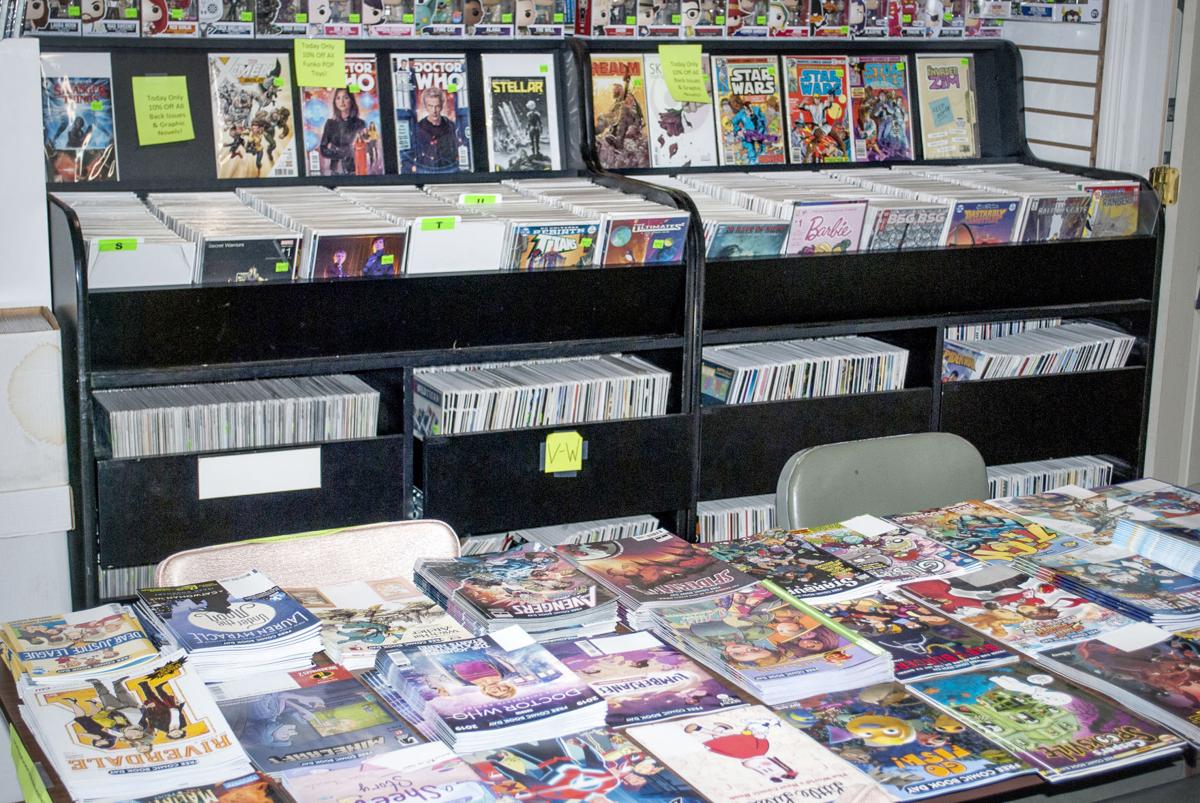 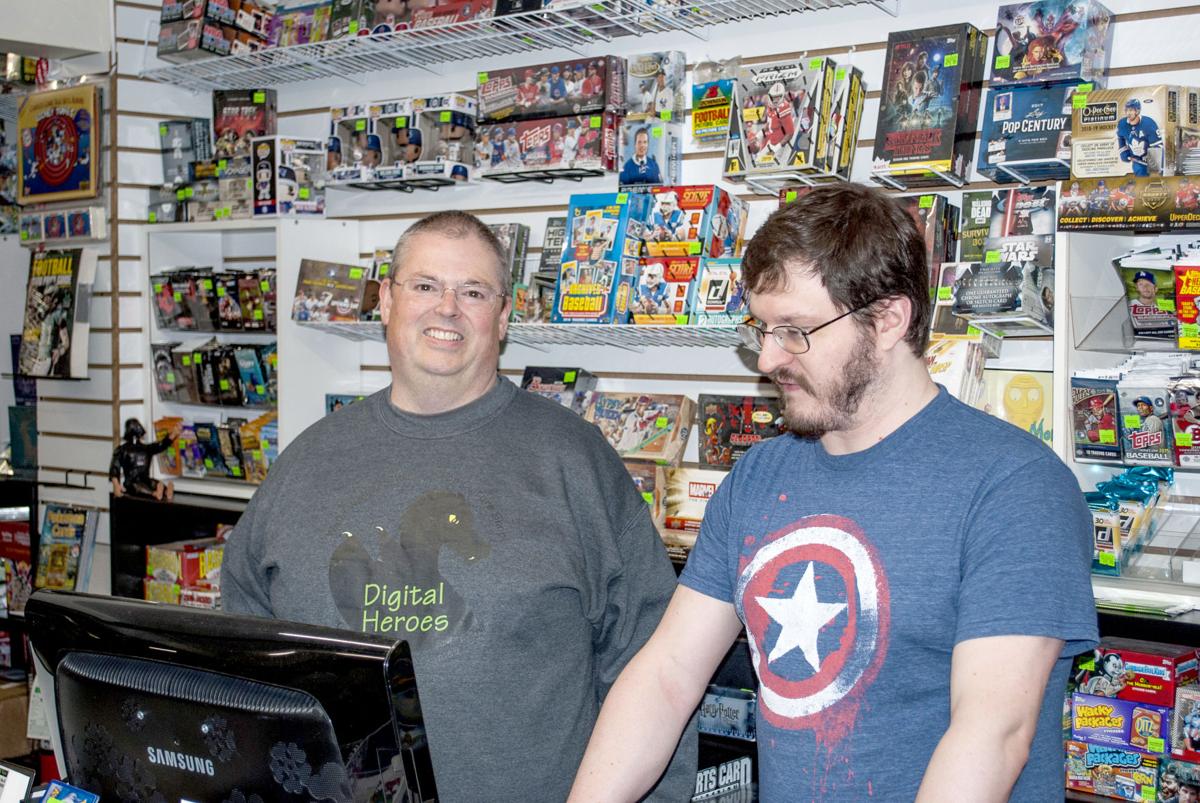 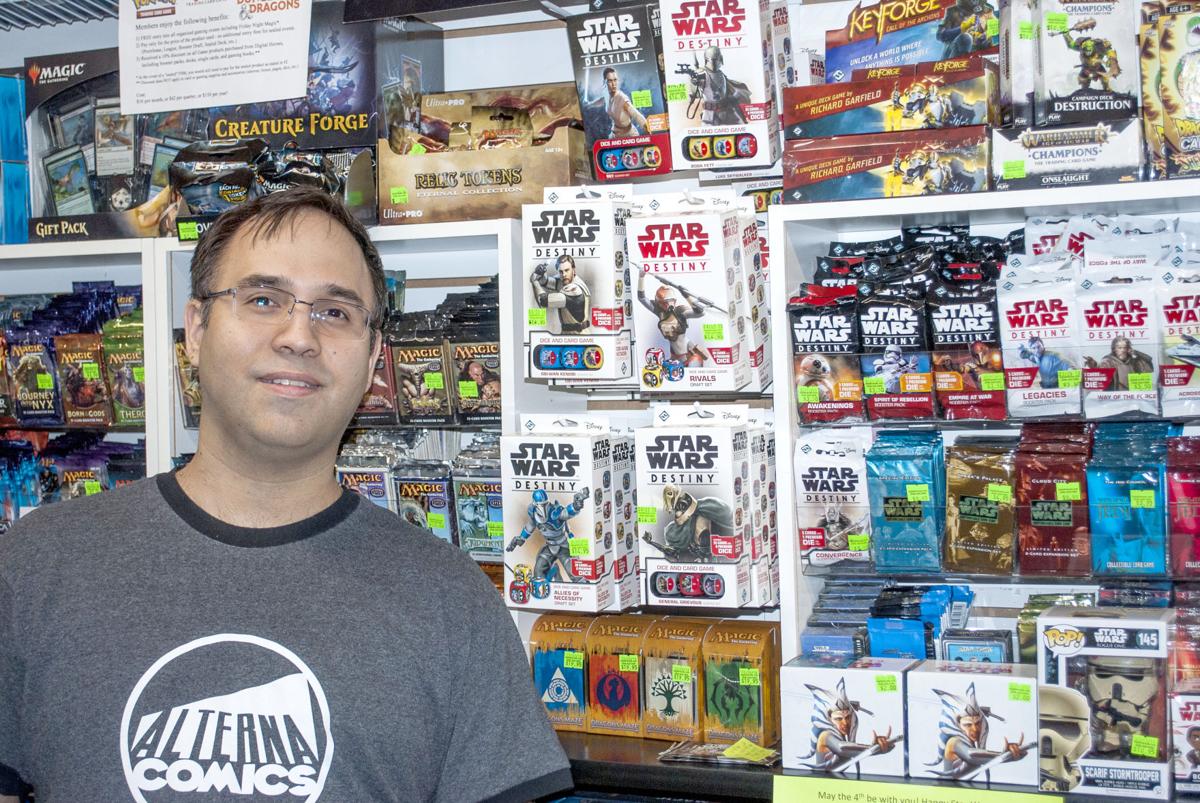 Miles Kooreny is the go-to expert for Star Wars: Destiny, a collectible card and dice-based game that takes place in the Star Wars universe. 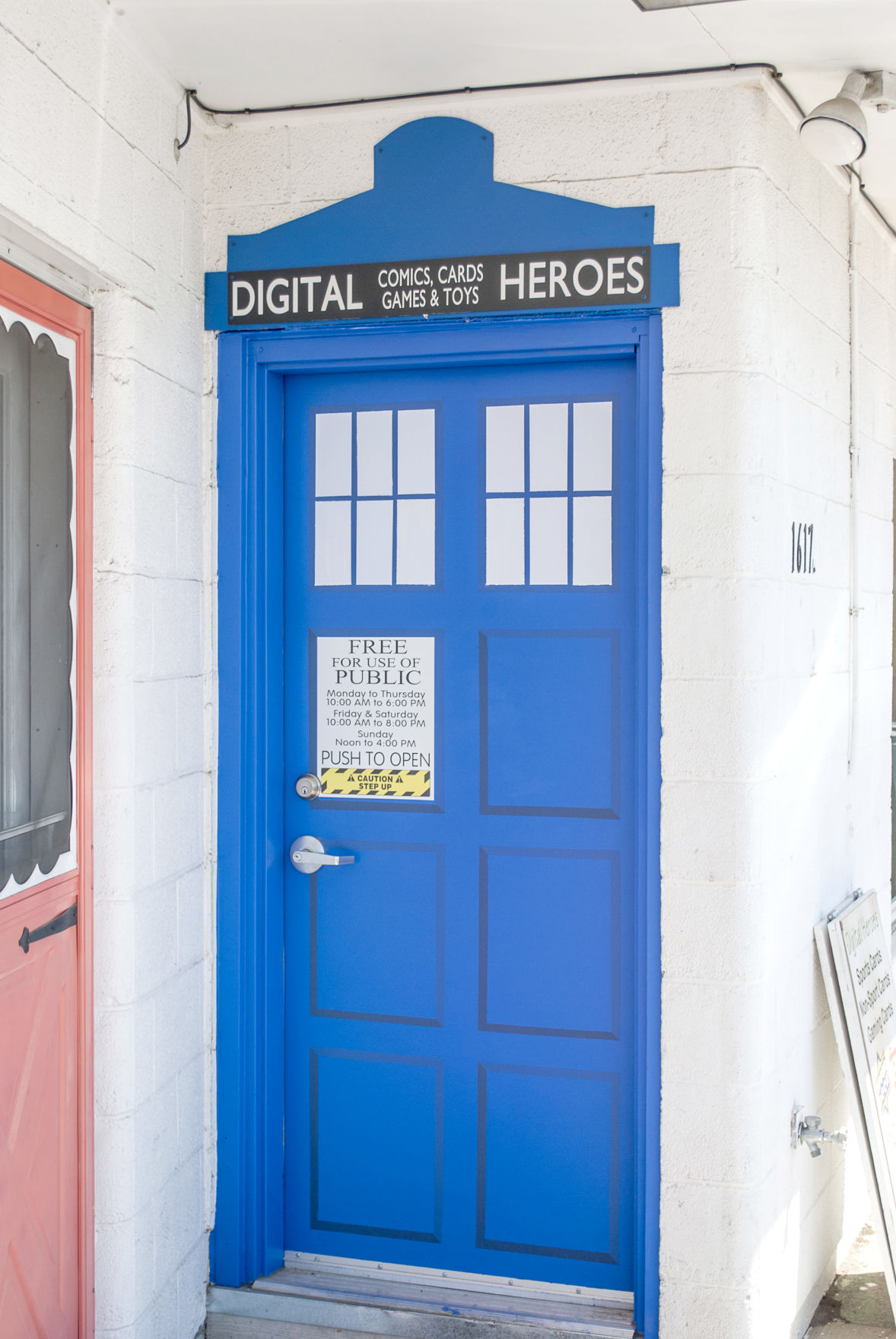 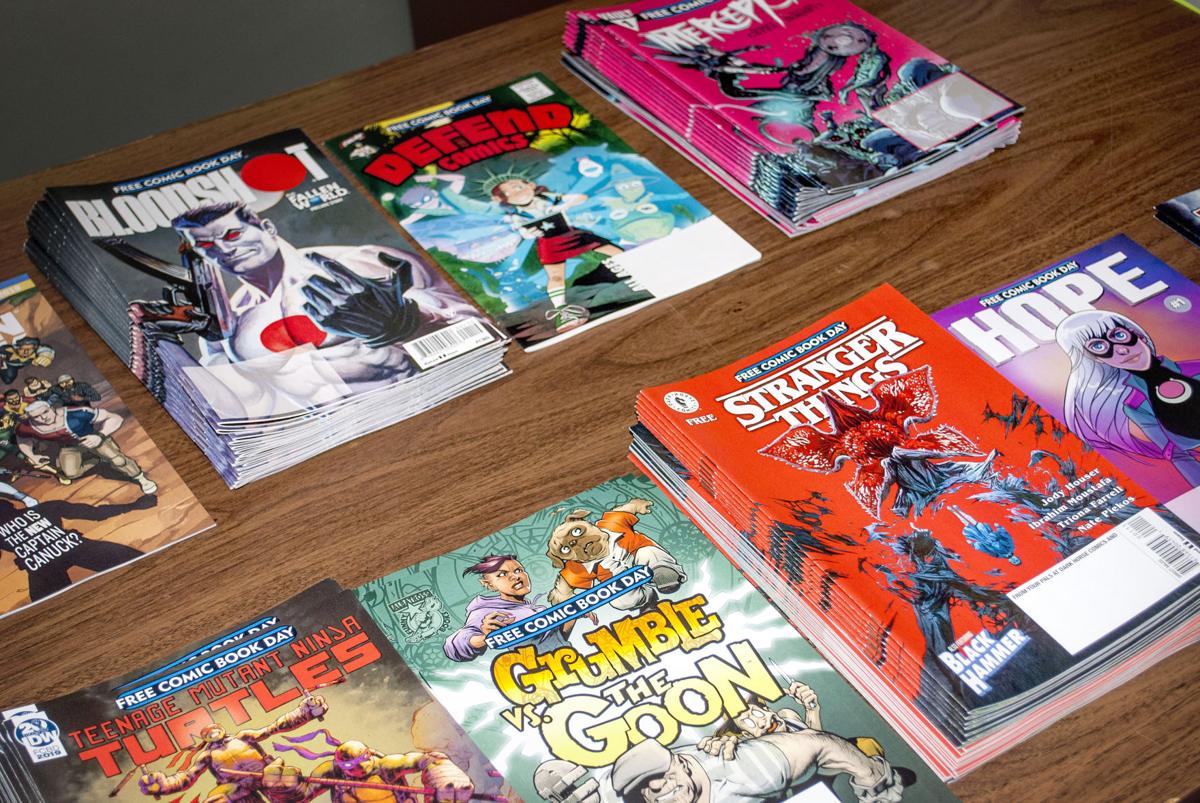 Miles Kooreny is the go-to expert for Star Wars: Destiny, a collectible card and dice-based game that takes place in the Star Wars universe.

After paying for purchases, several customers said, “May the Fourth be with you,” a pun on the Star Wars catchphrase, “May the Force be with you.” But for comic book stores, the most important event of Saturday was Free Comic Book Day.

Shop owner Jeff Watson has been in the industry since the 1990s and has promoted Free Comic Book Day through social media and word of mouth.

“It started about 18 years ago,” Watson said. “A man named Joe Field, who owns the shop, Flying Colors (in Concord, California), started it. He had seen — I believe it was Baskin Robins that does a free scoop or cone — it was an ice cream thing. He saw how that worked for those companies and how crazy busy they were on those days. He decided, hey, that’s what we need for the comic book industry. So, he started it and we as an industry just tagged along.

“It became incredibly successful for getting people into the shops at least one day of the year. Typically, for us, Free Comic Book Day is when we get the most traffic through the store.”

On Free Comic Book Day, Digital Heroes offered customers a free issue of a select few series. This included such titles as Image Comics “Deadly Class,” Vault Comics “Interceptor,” and AfterShock Comics “Animosity Tales,” as well as several others. For every additional purchase, a customer was able to choose an extra issue. They could also enter a raffle to win a copy of every issue, as well as several other comics.

Anthony Elia, an employee of Digital Comics sees the event as a chance to bring in new customers who might not have otherwise picked up a comic book.

“It definitely brings people in,” Elia said. “I would say, I wish more of those people stayed, but, at the same time, I’m always happy when people are reading comics. It’s one of those things of spreading joy of a simple medium. Why don’t you read comics? You watch movies, right? You read books, right? Why don’t you just read comics, too?”

A few of these customers are likely brought to the store by superhero movies, with the most recent, “Avengers: Endgame,” bringing in more than $2 billion worldwide. But Elia has seen little change in the sales of physical comics, despite the wild success of the films. He’s often told by new customers that they didn’t realize that Digital Heroes even existed, let alone the wealth of comic books that are published during the year.

“I do know it has an almost negligible effect on physical sales,” Elia said. “We have a bunch of back issues of Avengers that no one has come in and bought … Part of it has to do with the fact that comic shops exist. When we started doing that — as cool as it is to have a shop where you can go — I really wish we had comics on racks again in grocery stores and things like that. If you don’t know a comic shop exists, you’re not going to go there.”

Despite this, Elia loves helping new customers find a title that appeals to them. He emphasizes the open and accepting attitude of the store and its customers.

“We have good people that come into the store, and I know how that can be for a lot of comic shops,” Elia said. “I do my best to make sure it’s open to anybody. So, it is a family friendly place, it is a place that women can come to, all that kind of stuff. That’s something we pride ourselves on quite a bit. I really wish more places did that. I know it’s not just for Walla Walla, but that’s what we do.”

Elia was one of the first to be hired by Watson when he reopened Digital Heroes in 2015, but Digital Heroes has existed in some form or another since 1991 when Watson was living in Seattle. He had been making money at various comic conventions and shows. When he moved back to Walla Walla and opened the original store on Boyer Avenue near Whitman College, his shop was the only comic book store in town.

“It was pretty successful,” Watson said. “It also happened that ‘Magic: The Gathering’ started in ’93 and (game creator) Richard Garfield was teaching math at Whitman College He came into the shop and introduced himself; he asked if he could teach people to play ‘Magic’ in the shop. That was crazy. I had friends who were working at Wizards of the Coast also — I graduated high school with them. It all just came together. Who knew, when Richard came in and started teaching people to play ‘Magic,’ that it was going to go nationwide. We got in on that really early and it was very helpful.”

To celebrate Star Wars Day, Digital Heroes employee Miles Kooreny was intending to run “Star Wars: Destiny,” a collectible card and dice-based game. Kooreny has been teaching and promoting the game since its release in 2016. It’s become popular in Walla Walla, bringing several new customers to the store.

For Watson, Star Wars was his entryway into comics in the late 1970s and early ’80s.

“Star Wars got me into everything,” Watson said. “It first came out in ’77, I was 10 years old. I was the perfect age for it. Honestly, it was the Star Wars cards that caught my eye first. I talked my mom into buying me some and then I saw Star Wars comics; I started collecting them. I had a friend who collected comics and he brought over some superhero things and the Fantastic Four was one of the very first superhero [series] I started reading.”

All of the employees of Digital Heroes recognize that many of the people to walk through their Tardis-style door on Saturday will not return as avid readers or collectors, but they hope that they can, at least, promote the small entertainment medium of comics and showcase what it has to offer.

“Don’t be afraid to come in and read a comic,” Elia said. “I know the superhero stuff can seem very impenetrable to start, but one: you don’t have to get a superhero book. There’s a genre for everyone. So, I would just say, don’t be afraid, and if you want to get into superhero stuff, I’m here to help. Sometimes it’s just good to jump into the deep end. I started comics in the ’90s. That wasn’t a great time to start in on the X-Men. But that was half of the fun, finding out who all these people were and what these things are.”

Alasdair Padman can be reached at alasdairpadman@wwub.com.

After receiving almost 2,000 responses from a recent survey asking for p… Click or tap here to read more