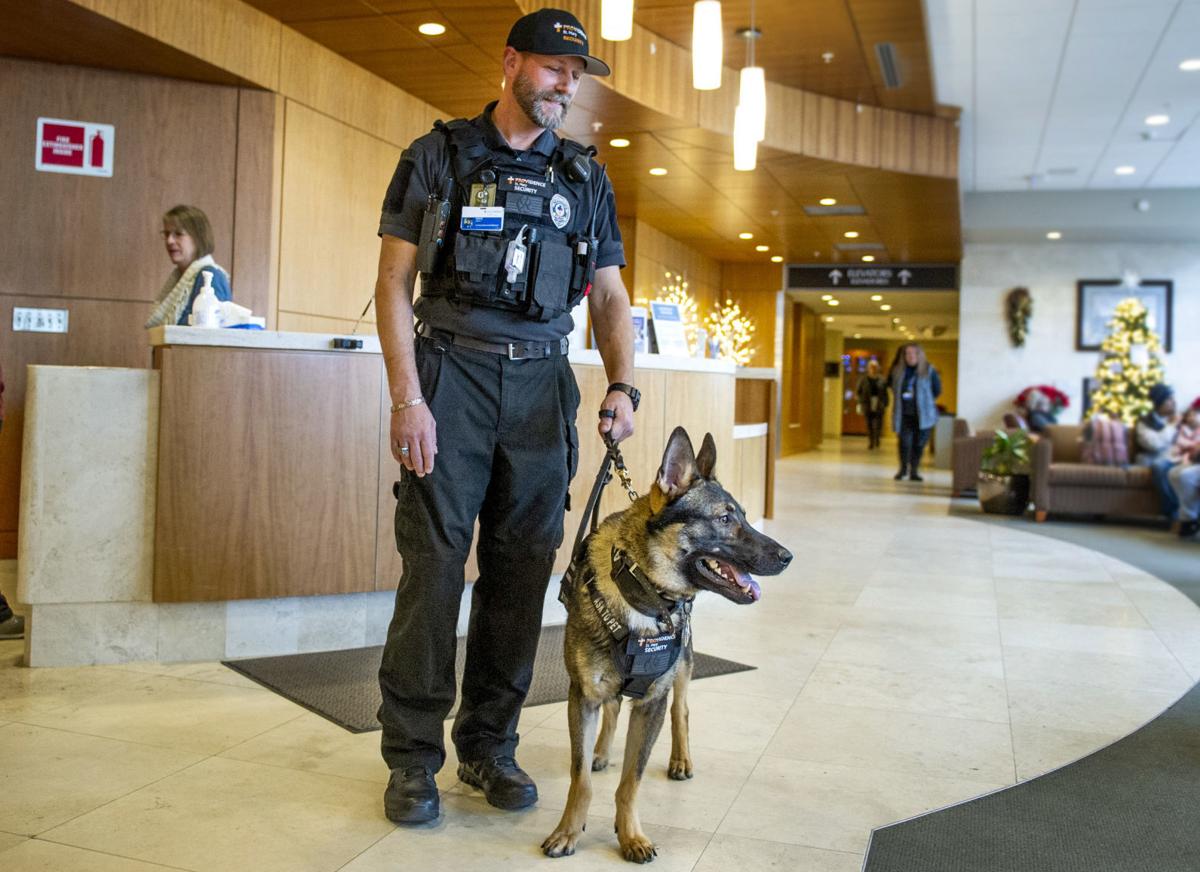 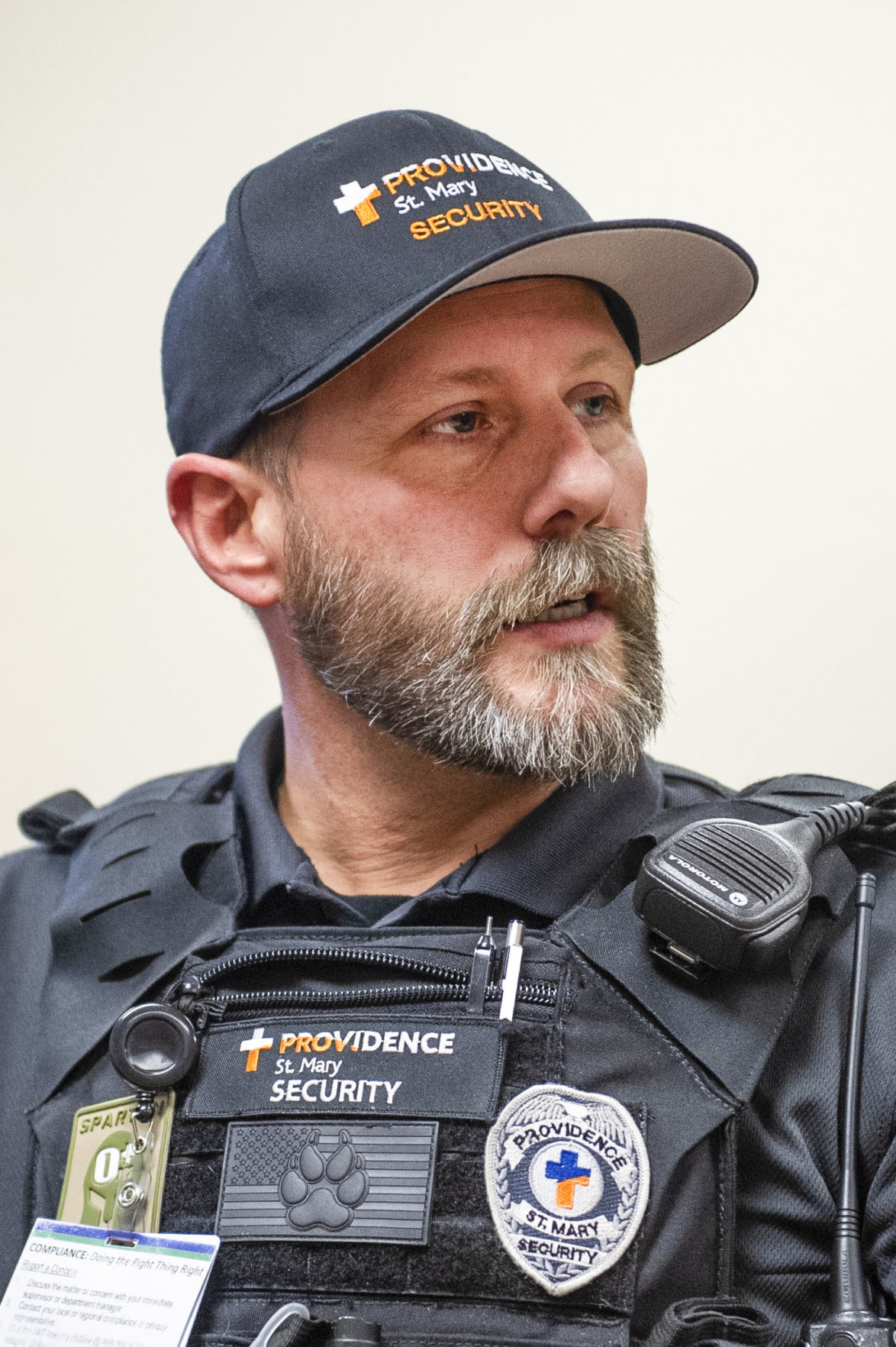 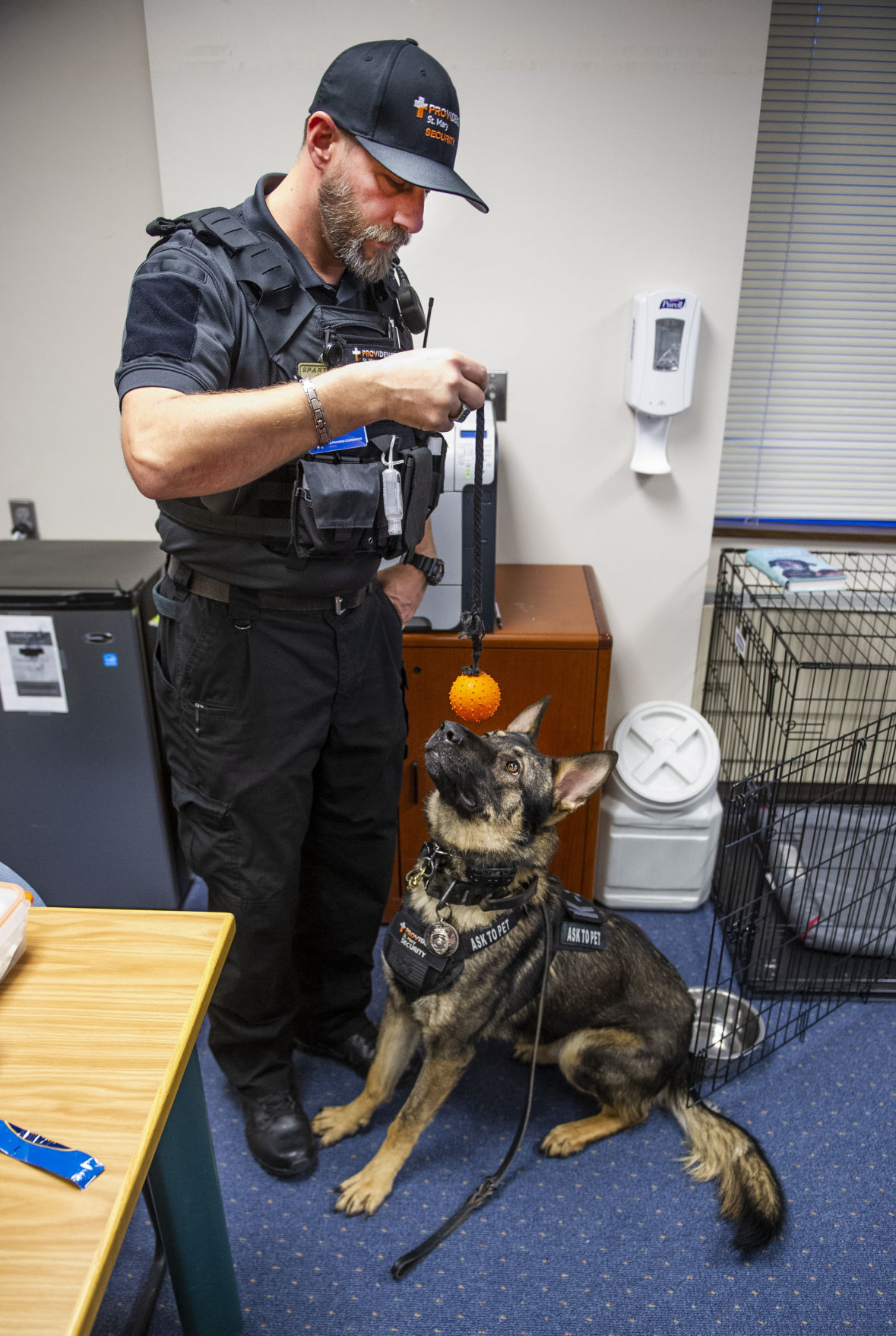 Providence St. Mary security officer Mike Smith rewards Axel with some playtime after he found some of the narcotic scents during training.

Providence St. Mary security officer Mike Smith rewards Axel with some playtime after he found some of the narcotic scents during training.

Even when K-9 officer Axel takes a break in his kennel, a part of him never stops working.

“He’s got quite the nose on him, and he picks up on things,” said handler and K-9 Program Coordinator Mike Smith as Axel sniffed the air around him.

The German shepherd/Belgian malinois cross has been on the job two weeks.

He and Smith, who joined St. Mary in March after working in Oregon law enforcement, are a security team, trained over eight weeks together at the Alabama Canine Law Enforcement Training Center.

With the new addition, St. Mary is one of four hospitals in Washington with a K-9 on its security team.

That dynamite sense of smell is expected to help with Axel’s two specialized services: contraband detection coupled with patrol security to reduce and deter workplace violence.

Health care employees face the biggest risk of workplace violence of any industry outside of law enforcement, according to Occupational Safety and Health Administration data. Rising addiction has been part of that, hospital officials say.

For someone already battling addiction or any number of other challenges, compromised health in a bustling environment and sometimes lengthy wait times are compounding stressors that can push some over the edge.

Hospital officials say no singular incident led to the decision to bring in a K-9. But the hospital serves as a microcosm of the broader community, where narcotics and assault offenses have increased.

Drug and narcotic violations spiked for the Walla Walla PD during that same time period, from 100 to 153 offenses (53% increase). College Place Police Department saw a 100% increase from three to six. For the Sheriff’s Office, the reported offenses climbed 10.3% from 29 to 32.

Data from the reports show health care related facilities — from drug stores to doctors’ offices and hospitals — are among the top five locations where simple and aggravated assaults take place, though residences are by far the most common.

The K-9 addition is part of an overall strategy to help deter violence and create a safer environment for patients, visitors and staff.

That change has expanded the security team. Since April, the hospital has had a large enough staff for a 24-hour security presence at the campus, with overlapping employee shifts during peak hours for the emergency department.

Providence introduced its first K-9 at a Washington hospital in Spokane at Providence Sacred Heart Medical Center. Walla Walla has followed that lead with an investment from the Providence St. Mary Foundation.

The nonprofit invests in programs, technology and equipment for St. Mary through donations and fundraising. The K-9 program was an investment of about $40,000, which includes the purchase of the animal, plus travel, training and equipment.

“The role of the foundation is to really understand how we can meet the current and future health needs of the community,” said Lindsey Oldridge, the foundation’s chief philanthropy officer.

“One major priority was to really look at the safety and security of the campus for our patients and our visitors and our staff.”

Oldridge said the purchase was possible thanks to unrestricted donations that allow the foundation to respond to requests as needs arise.

Acclimating Axel to the campus is a continuous process as he becomes familiar with elevators, departments, the constant swirl of people and the never-ending smells of a health care facility.

Born in the Czech Republic in August 2018, Axel was chosen specifically for work in a health care environment because of his mellow and gentle nature.

In that sense, he is similar to the K-9 units that have joined Sacred Heart, Tacoma General Hospital and Kadlec Regional Medical Center. Nationwide about 14-15% of hospitals have K-9 officers, Leathers said.

Axel wears a work vest and a badge from his e-collar, which emits a tone and also has a built-in light for dark building searches.

Though he came with a kennel name, Smith changed it to “Axel,” which translates to “Father of Peace” in German.

“It’s like he’s the peacemaker on campus,” Smith said.

Their training together included intensive days that started each morning with kennel cleaning and built into tracking training through grass, field and woods work.

Axel’s specialty is narcotics, and his detection work has taken him through vehicle, building and warehouse searches. His training did not include marijuana detection since it is legally permitted for recreational use in Washington.

On his off-hours, Axel lives with Smith and two rescue shepherds.

At work, he is constantly on the move. Permission to pet him comes through Smith, as Axel may be working at any moment.

“That kind of breaks the ice, too,” Smith said of the K-9 interactions with staff, visitors and patients.

Although his role is not the same as other therapy service dogs on campus, his presence has had the same effect. He has already been a comfort to those struggling emotionally.

The hope is that his presence serves as a deterrent to violence and other offenses.

“He’s one more tool in our arsenal,” Leathers said.

A meet-and-greet event is in the works for February at PetSmart to give the public a chance to see and interact with Axel.