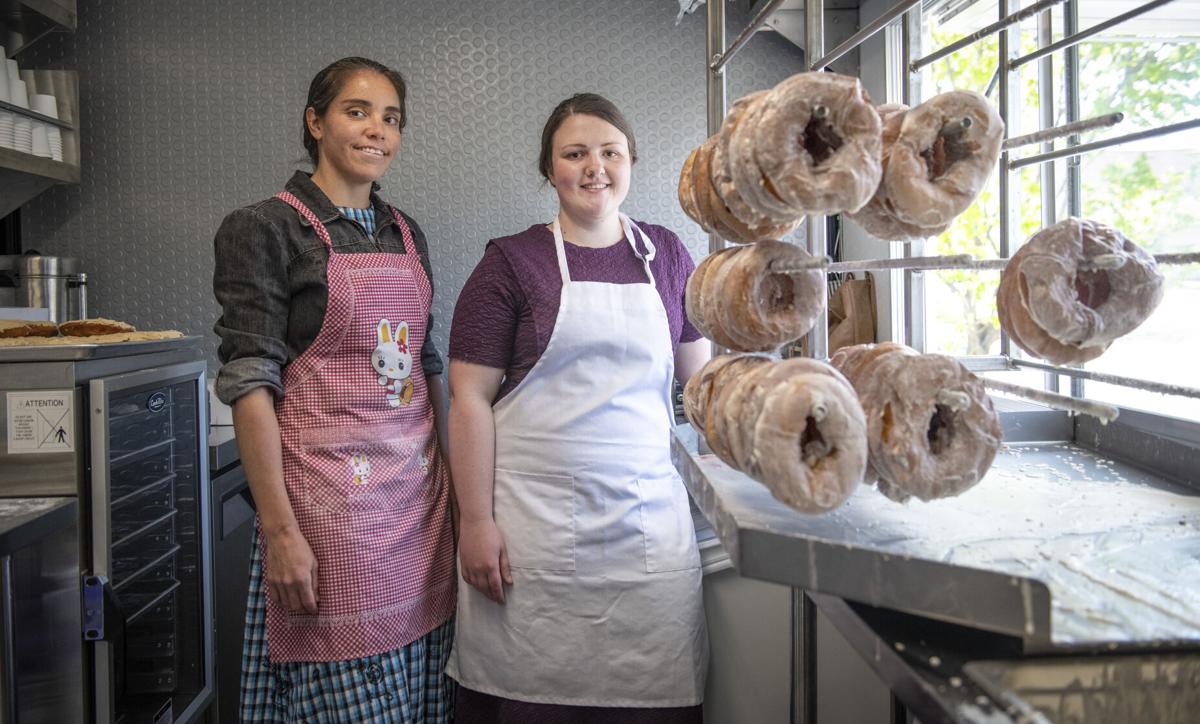 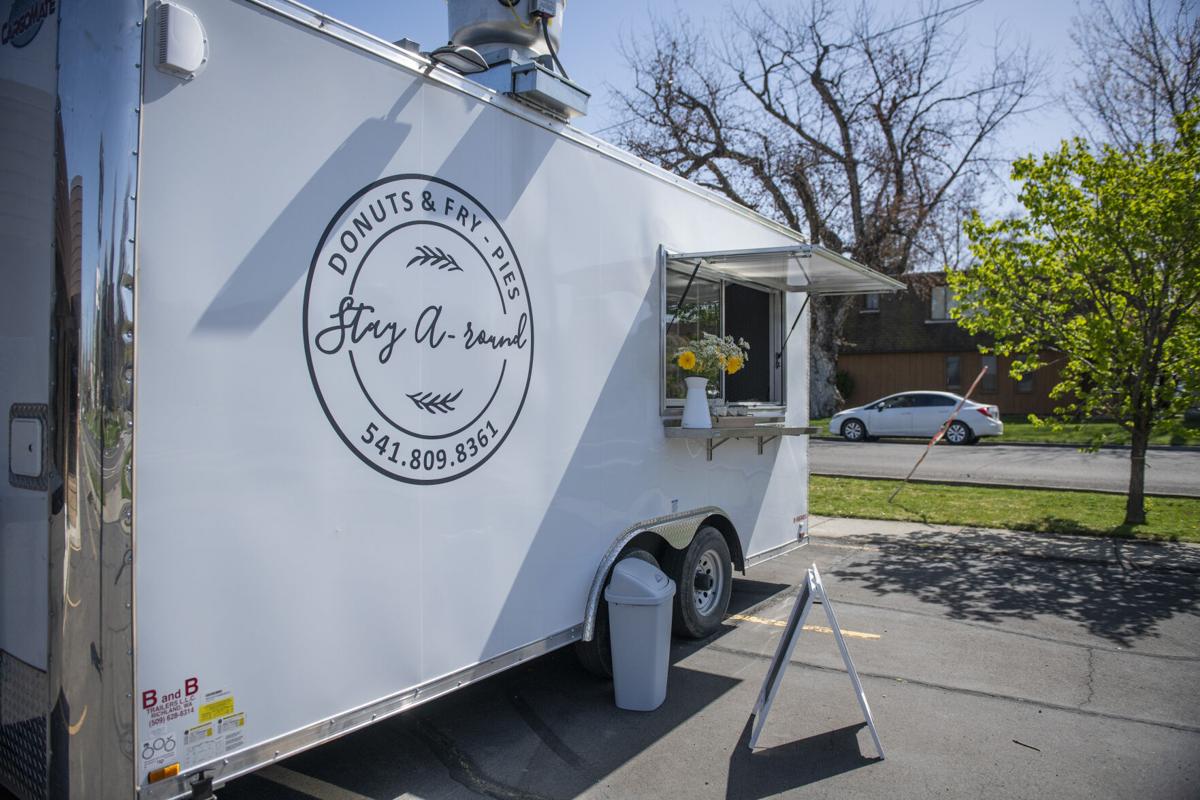 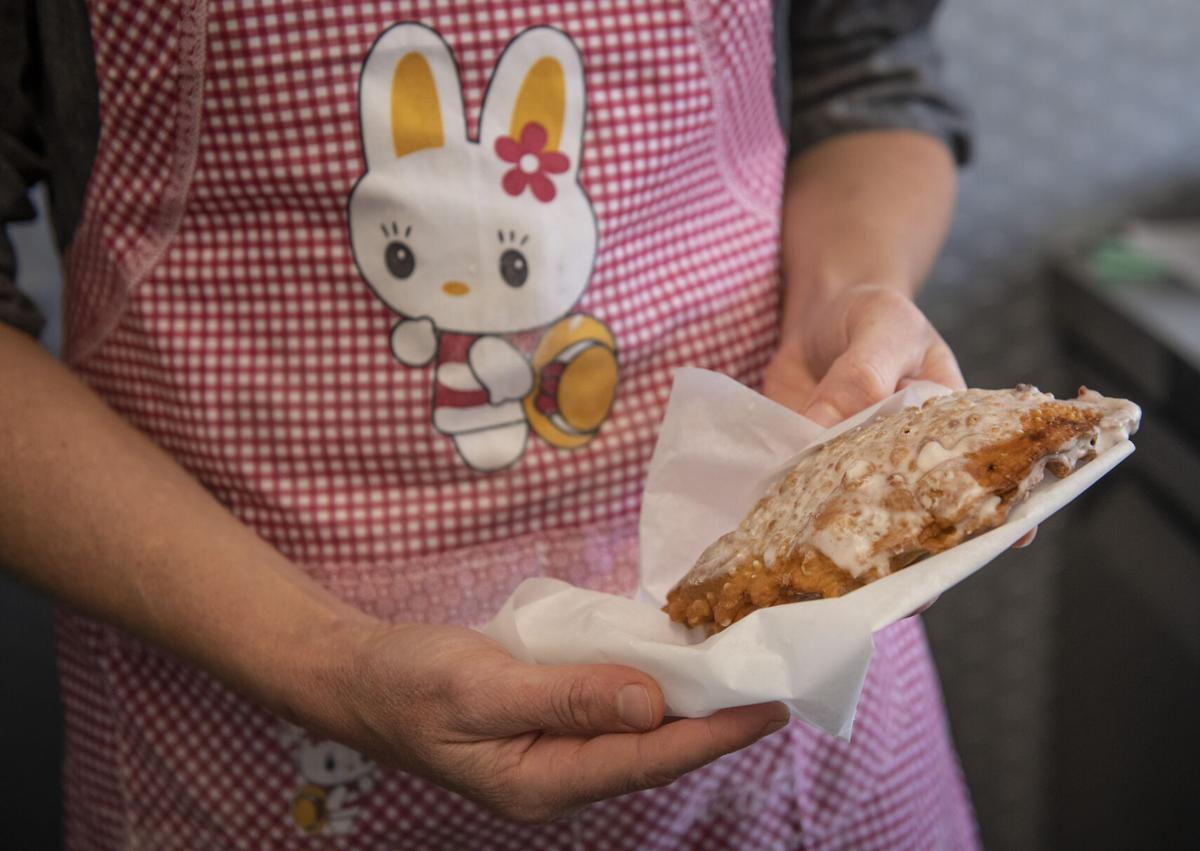 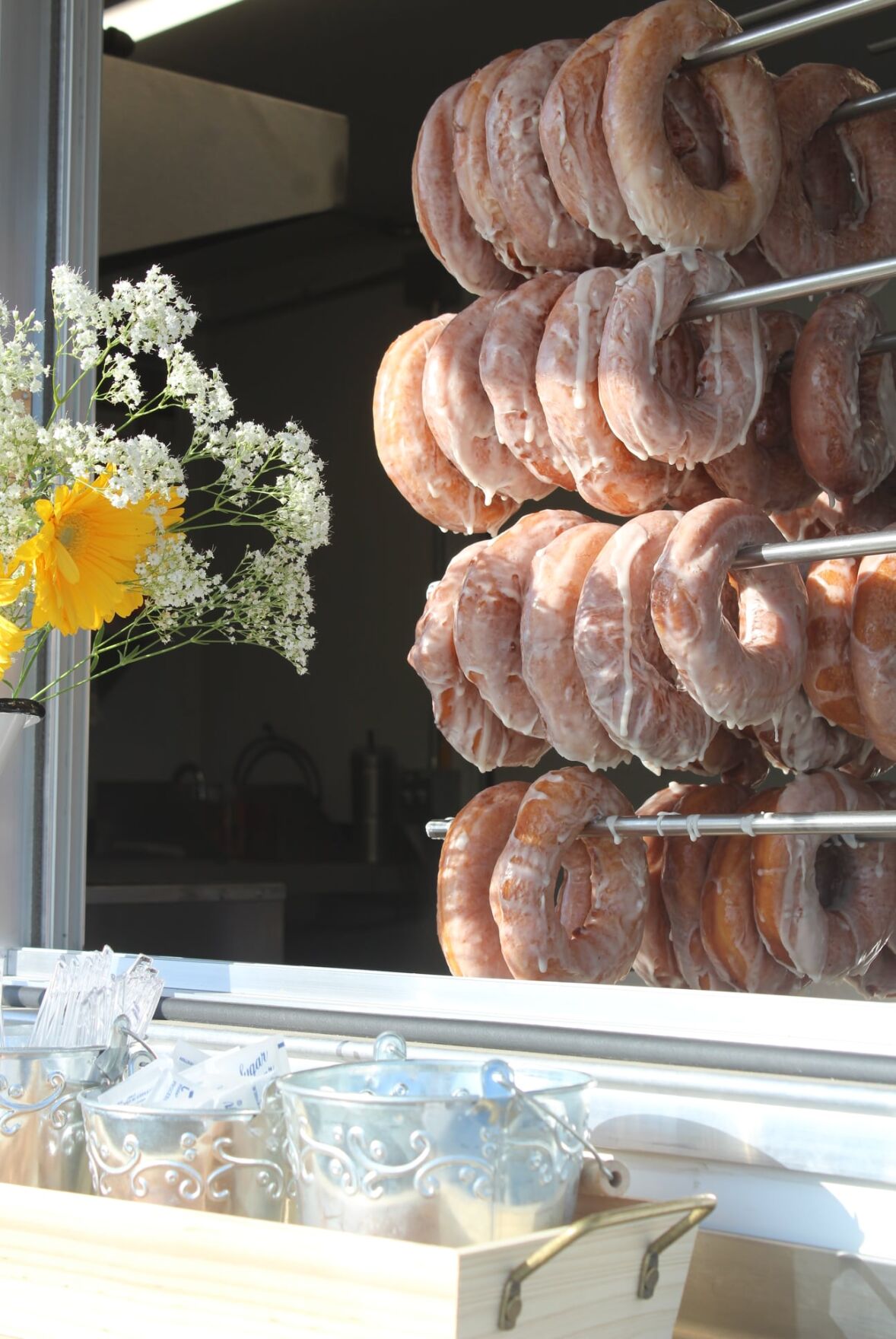 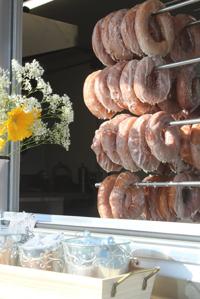 MILTON-FREEWATER — It’s possible Bob White wasn’t quite sure what was in store for him, unless the aroma had already given it away.

Standing at the sleek, white trailer parked at Seaquist Real Estate on South Main Street, White had just ordered his first fry pie and an extra to take home to his wife.

“I have absolutely no idea about these,” White said in response to a query about his expectation.

With his first bite, the retiree would learn that the namesake goodie from the Stay A-Round Donuts & Fry-Pies food truck is warm, plump and oozing with sweetness — on this day, the pies were filled with mixed berries, tucked inside a pastry that takes two hands to heft.

Tuesday, April 6, was the second day of business for Michelle Swartzentruber and her team. Three days earlier, a grand opening had sold out 200 fry pies and countless doughnuts well before the food truck was planning on closing at 2 p.m.

“The whole family was on board, and we could not keep on top of it. I didn’t even have time to set out the sign,” Swartzentruber recalled, her smile still looking surprised.

This is the first business venture for the 25-year-old, but not a first adventure. Until now, her jam has been teaching school. Most recently that meant teaching at a bilingual public school in Honduras.

“I taught all the subjects … I loved everything about it, the kids especially. There’s something so rewarding about teaching kids new things.”

But she comes from a line of bakers, including herself, Swartzentruber said. For several years her family owned Our Daily Bread Bakery and Books, just a few blocks up the street from where the food truck is parked.

While that retail location has closed, the baking business has not, and her family wasn’t afraid to use the young woman’s love of creating treats as bait.

Hence the “stay a-round” part of her logo, Swartzentruber said with a laugh.

“I kept leaving to teach school, but I moved back home a year ago, and I wanted to do something different. And this time my friends and family wanted me to stay around.”

Her father sweetened the deal by investing about $50,000 in buying a new trailer and getting it outfitted with a commercial kitchen. Altogether it’s about 9,000 pounds of commitment, Swartzentruber said.

The past year has included perfecting doughnut and fry pie recipes, learning what parts to cook when and where, and getting the needed licensing.

The latter part has proved the hardest, she said.

Not only did the focus on battling COVID-19 take inspectors, certifiers and other public health staff away from their regular work, the logistics of a pandemic caused a backlog in getting the green light to open, Swartzentruber explained.

The baker had already secured her Milton-Freewater spot through a work connection with Seaquist owner Valerie Crimins (Swartzentruber is still in the process of setting up a Walla Walla location), meaning last Saturday was a “go,” at last.

For now, the mobile shop will be open Tuesdays and Thursdays at the real estate office, 8 a.m-2 p.m., although the operation is already being sought for openings at private and commercial events.

A number of flavors for donuts and fry pies will circulate on the menu — chocolate, maple, snickerdoodle, coconut cream and more — but just one at a time for fry pies and two flavors for her extra-large doughnuts, Swartzentruber said.

There’s good reason, she pointed out. In addition to limited cooking space, there’s the prep time. Making the dough and filling for 200 fry pies takes two people about 11 hours, and that doesn’t include the onsite fry time.

Her team is bound to get faster at it, the baker said, but people haven’t seemed bothered by the small menu.

Comments on social media second her observation, with a number of fans describing their sweet experience with Swartzentruber’s food.

It looks like her family has attained their goal, as well.

“I’m here for a long time,” Swartzentruber agreed with a grin.

Glasses found in the Union-Bulletin