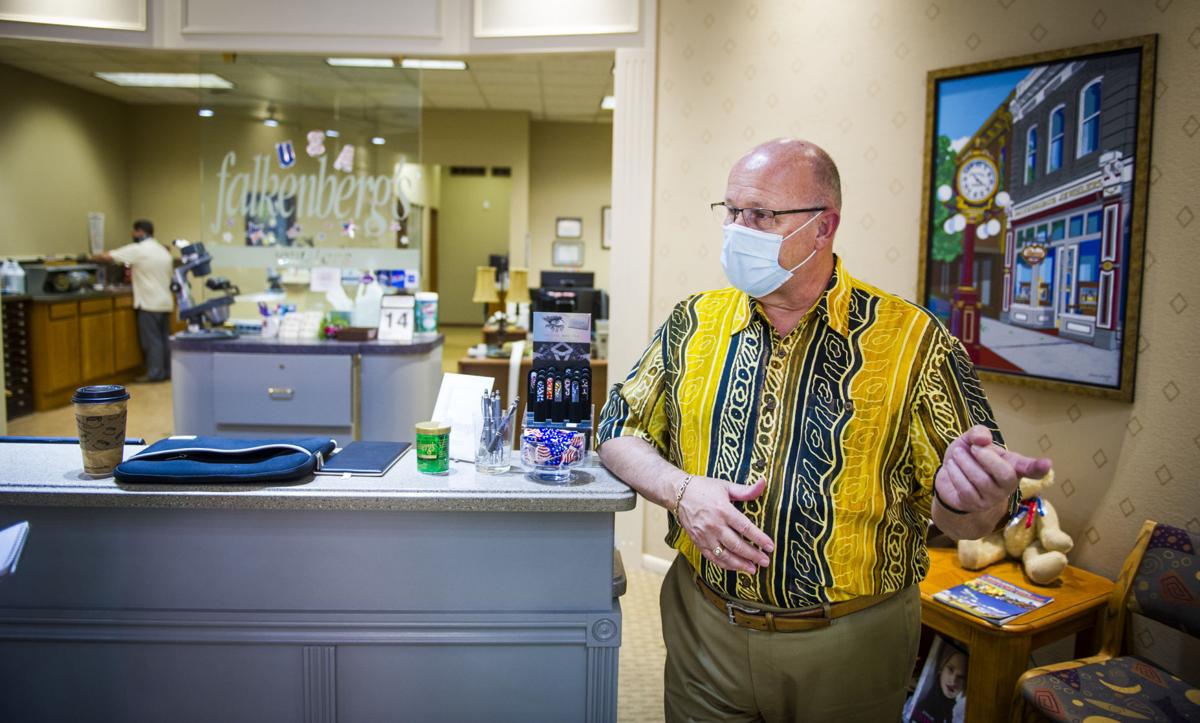 Falkenberg’s Skip Cundiff talks about the weekend closure of a section of Main Street. Although the idea to use sidewalks and the street to promote business extends to retailers, doing so securely as a retailer of jewelry is tricky. 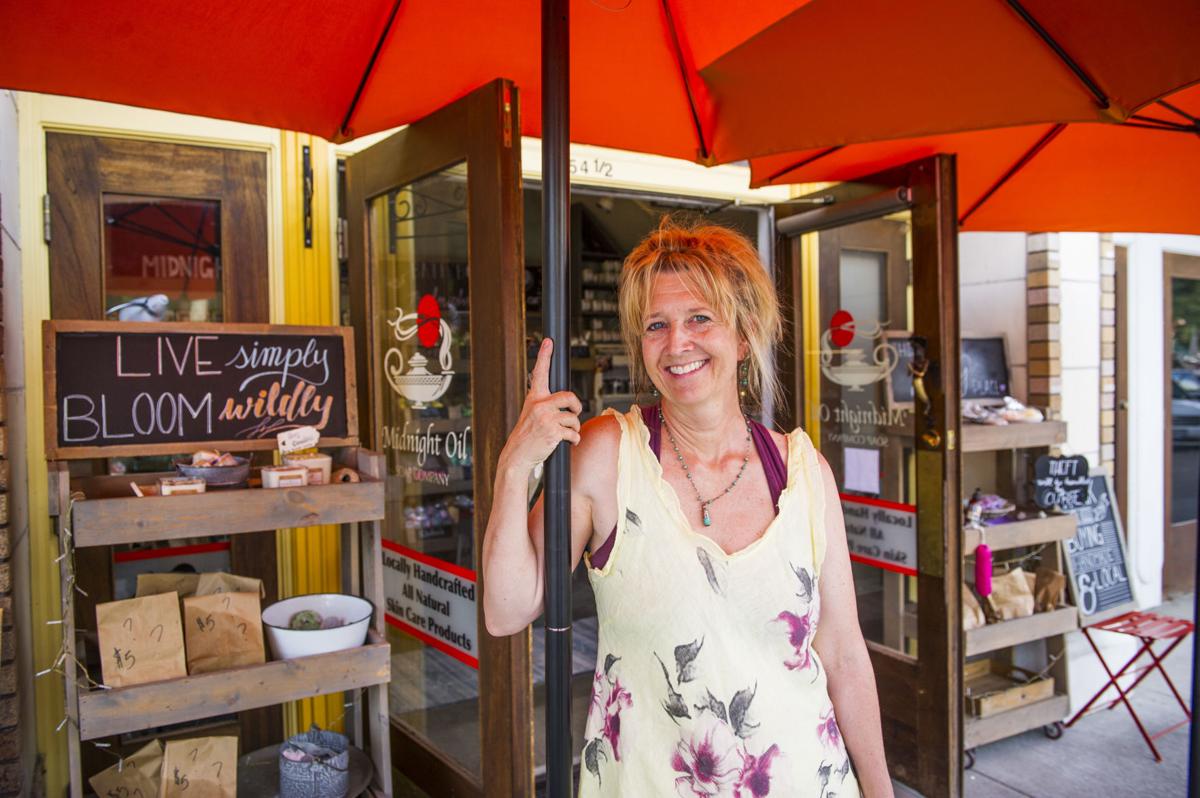 Midnight Oil & Soap Co. owner Kim Hedine stands outside her small Main Street shop where she worries the road closure on the weekend outside will deter customers.

Falkenberg’s Skip Cundiff talks about the weekend closure of a section of Main Street. Although the idea to use sidewalks and the street to promote business extends to retailers, doing so securely as a retailer of jewelry is tricky.

Midnight Oil & Soap Co. owner Kim Hedine stands outside her small Main Street shop where she worries the road closure on the weekend outside will deter customers.

All up and down Main Street in downtown Walla Walla this morning, the attitudes were aligned among its many retail merchants.

Many a merchant said that phrase as today marks the first time East Main Street will be closed from Second Avenue to Palouse Street — a plan that local leaders hope to have in place every Friday through Sunday for the near future.

The idea was implemented after Gov. Jay Inslee announced last week that restaurants, bars and wineries would be getting stricter restrictions on gatherings. For bars, distilleries, breweries and tasting rooms, it means no indoor service.

But shop owners along the idyllic downtown row voiced concern that the new strategy to close the streets and allow businesses to operate on the sidewalks and in the roadway could be seen as a less unifying effort than local leaders intend.

“I’m staring down a line of wineries,” Downtown Walla Walla Foundation Executive Director Kathryn Witherington said. “Many were telling me ‘this is it for us.’”

After the initial COVID-19-related shutdown and now facing another barrier to service, it seemed the new restrictions could be the nail in the coffin for many a business.

The scramble was on to help. Witherington and city leaders put their heads together to figure out how to help the bars, restaurants and 35 tasting rooms in the downtown corridor.

“This was a moment of — honestly — triage,” Witherington said of closing Main every weekend. “What can I do to make sure these people are here next week?

“It sounds dire to say ‘triage,’ but that’s what it is. In this moment my wineries are not OK, so I help them and then I can shift to the next thing that’s not OK.”

In that quick turnaround, some merchants felt it was another gesture toward the tourist-centered food and beverage industry.

Some owners were unaware of the extent of the closure until they were interviewed or they had read about it.

Witherington said she understood the frustration and was doing what she could to get the word out.

In the meantime, Trove Home & Vintage Goods owner Julie Batson said she doesn’t fault Witherington or city leaders for trying something, but she feels retailers were left in the rearview mirror in many aspects since the COVID-19 pandemic began.

“My whole view of it is we really wanna be more unified as a downtown core,” Batson said. “When we see money being thrown at the food and wine industry and (retailers) don’t see any of it, it certainly doesn’t encourage that team spirit.”

Batson called on Witherington to organize a meeting of retailers. They met in a webinar Wednesday and aired their frustrations and talked solutions.

“I will tell you I shop in pretty much every single store,” Batson said. “I love wine, so I’m out there supporting them all.

“But I feel like the closure will directly impact an already hurting community of retailers. I love Kathryn (Witherington), she’s awesome ... I’m just concerned not enough conversation has happened beforehand.”

Shop owners seemed wary of the change as not only does it cut down on vital parking spaces in the downtown corridor, but many seemed to think it could adversely impact their usual flow of local foot traffic.

Skip Cundiff at Falkenberg’s Jewelers said he typically serves an older crowd that could be harmed by the heat, although he is more worried about losing customer parking for the whole weekend and noted it can be difficult to extend a jewelry shop onto a sidewalk without a greater security risk.

Cundiff said he let city leaders know his displeasure with the situation.

“I feel like it’s us versus restaurants and wineries,” Cundiff said. “But we’ll see what happens ... I’m hoping it’ll be OK.”

Cundiff said he initially thought the streets would be closed after normal business hours in the evening Fridays, which he was fine with. But he said he was taken aback by it closing all day today.

City officials said the decision was made to close the roadway all day Friday because hours would have been extremely limited if they had waited until the traditional end of the day to close off the streets and allow businesses to expand outside.

Supervisors at the downtown Starbucks said they have seen increases in to-go orders with many people parking on the street, coming in quickly and then leaving — a trend that could be slowed down by the closure.

At Midnight Oil & Soap Co., owner Kim Hedine said she is nervous about her older, local customers who might have to walk a long way.

Her main concern was around local shoppers.

“I hope this doesn’t cause a divide between businesses and locals,” Hedine said. Despite getting tourist dollars, Hedine said local shoppers are the “bread and butter” for merchants.

Main Street Furniture Co. owner Kelly Belcher mentioned freight shipments could be affected for some, including her own shop. As she spoke, a freight truck was unloading at Walla Walla Bread Co., across the street. A shipment that would presumably have to be hiked from another location were it on a Friday.

“It could hurt some businesses and it could help others,” Belcher said. “Wait and see” is the name of the game, she said.

By the end of today, the story could be different, most of the merchants acknowledged.

Witherington said she is sympathetic to all of the concerns of the merchants and said this should be seen more as an experiment.

“I don’t know what this weekend is going to look like, but I think it’s going to be kind of insane,” Witherington said. “If (local people) don’t come out, and we fail, then we will try something else.”

Witherington said she spoke recently with some colleagues in other areas in similar positions as hers. Their outlook was dour.