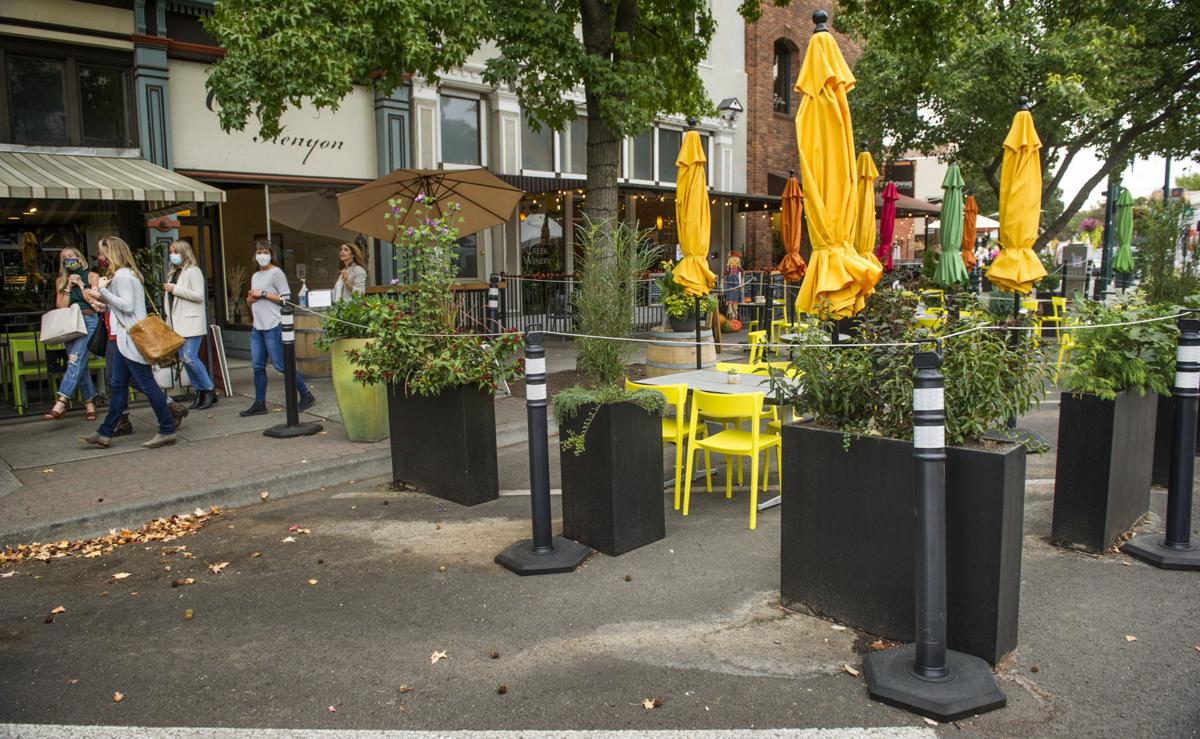 Parking spaces in front of Otis Kenyon Wine on Main Street will be converted into a semi-permanent “parklet” for guests of the tasting room and the broader community to use starting this week. 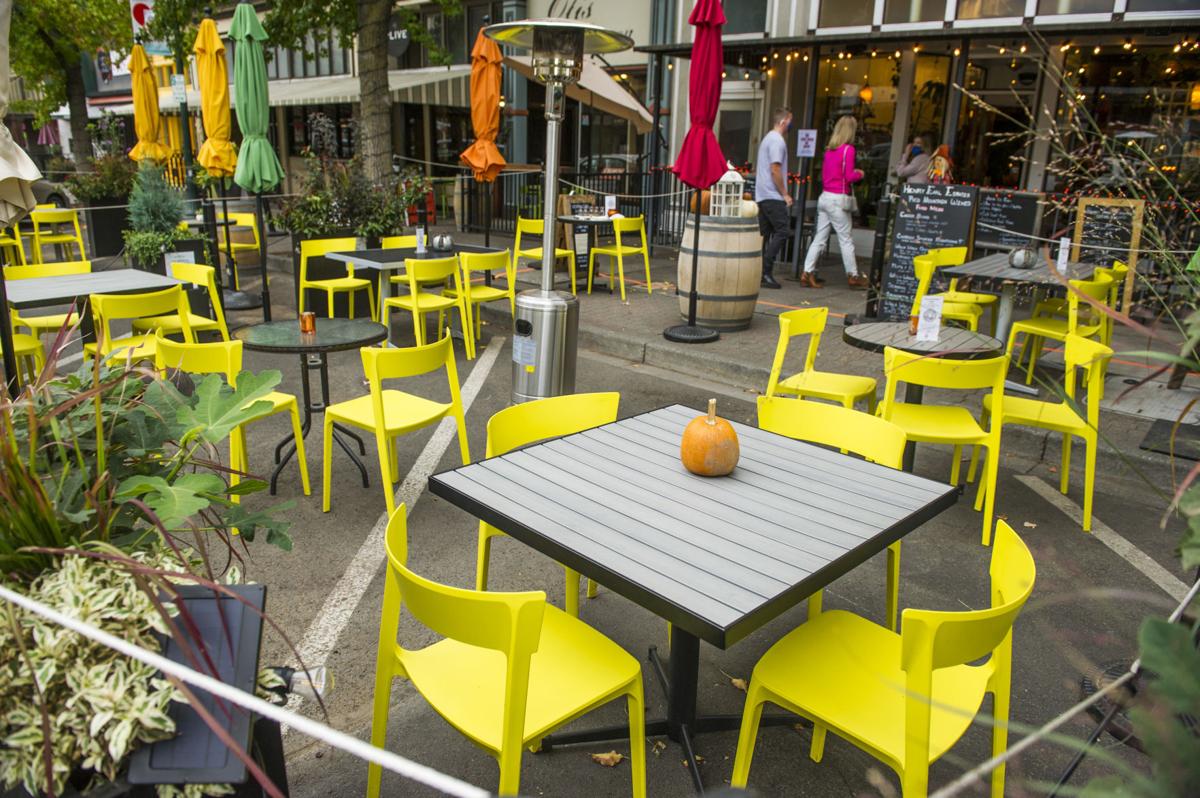 Tables and colorful chairs enlarge the tasting space into what have traditionally been parking spaces outside of Henry Earl Estates on Main Street. 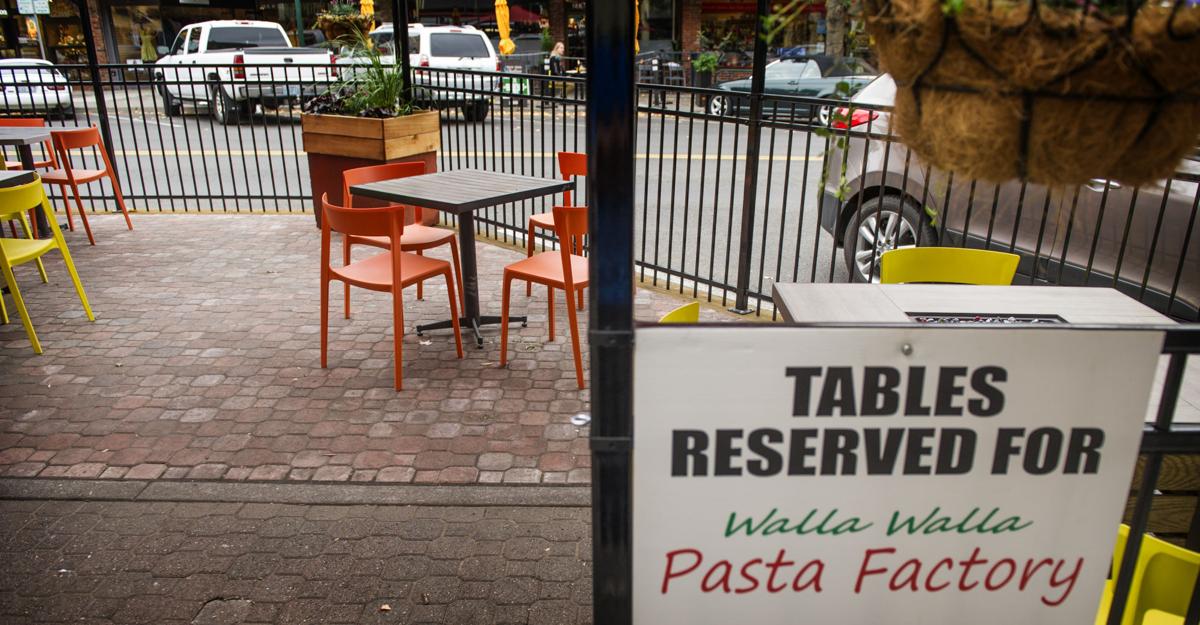 The “streatery” — open space used for dining in what used to be parking spaces — outside of Walla Walla Pasta Factory features semi-permanent brick flooring that serves as a model for parklets coming just east of the Main Street restaurant.

Parking spaces in front of Otis Kenyon Wine on Main Street will be converted into a semi-permanent “parklet” for guests of the tasting room and the broader community to use starting this week.

Tables and colorful chairs enlarge the tasting space into what have traditionally been parking spaces outside of Henry Earl Estates on Main Street.

The “streatery” — open space used for dining in what used to be parking spaces — outside of Walla Walla Pasta Factory features semi-permanent brick flooring that serves as a model for parklets coming just east of the Main Street restaurant.

Dining and drinking spots temporarily set up in parking spaces outside of Main Street businesses last August will become a semi-permanent fixture in downtown Walla Walla starting this week.

City officials are bracing for a long season of COVID-19 restrictions that will prevent most downtown tasting rooms from hosting customers indoors until at least spring.

So starting Monday work will begin on “parklets” that will more seriously convert those municipal parking spaces into spots for use by the businesses while they’re operating and by the general public when they aren’t, said Deputy City Manager Elizabeth Chamberlain.

City work crews will remove the existing planters and stanchions — the upright posts set up to serve as guiding barriers — that have been in place since early August on either side of Land Title Plaza.

Replacing them will be more elaborate raised platforms of curbing and bricks, similar to the design used in front of Walla Walla Pasta Factory. The changes will allow downtown visitors to continue gathering in what will be better engineered patios while restrictions on indoor spaces are in place, Chamberlain said.

The work is an initiative of the city rather than the businesses. It is paid for with $50,000 in Coronavirus Aid, Relief and Economic Security Act funds, which must be spent by the end of November, she said.

The step comes after overwhelmingly positive response to the rapid changes made downtown by the city as a way to leverage the federal relief funds and combat the trickling effect of economic hardship for businesses in the wake of coronavirus restrictions.

Examples include creation of the downtown plaza on First Avenue between Main and Alder streets and the creation of “streateries,” what are essentially made when public spaces are converted to extend dining rooms outdoors.

The additional parking spaces cordoned off and used by clusters of tasting rooms along Main Street were the most temporary in structure, created simply by cordoning off the parking spaces and filling them with tables, chairs and umbrellas.

“The further investment in it is a reflection of the success of both those ones being built up, as well as the previous streateries,” said Kathryn Witherington, executive director of the Downtown Walla Walla Foundation. “Because people have loved the model and come out for it and commented on it, it makes sense to do this further investment.”

Restrictions for wineries, distilleries and breweries limit access for indoor seating and are limited to those places that also provide menus with a “reasonable” number of food items prepared onsite and not by a contractor.

That limits indoor operations at a large number of tasting rooms, Witherington said.

She said the patio doesn’t necessarily draw the winery’s longtime loyal fans or its club members. Instead, it seems to attract casual wine drinkers seeking a change of scene.

“It’s definitely changed the way we’ve done business from a tasting room side,” she said.

Guests there are more likely to sit with a glass of wine rather than seek a tasting experience.

While club members and serious wine drinkers have largely shifted their purchases online, the change downtown allows the winery to maintain a tasting room presence despite limitations inside.

With the weather cooling off, Kenyon said upcoming decisions for business operators like her will include whether to invest in outdoor heaters as one feature to continue drawing people to the patio.

The work this week to fortify the concept is expected to limit westbound traffic access on Main Street between Colville Street and Second Avenue, 6 a.m.-5 p.m. Monday through Friday.

Chamberlain said the process will include the use of sand to level out uneven spots with Main Street’s evident crowning. Pavers will extend the design aesthetic of downtown sidewalks into the space.

The beautification will build on an atmosphere Witherington said she hopes will continue to draw people downtown.

“This model really excites me for the future of Walla Walla,” she said. “I think we’ve shown that mixing pedestrians and traffic can work when done well, and this is a step in the right direction.”

Looking for past teacher

Become a Union-Bulletin Carrier No

Looking for Gary Keenan (he used to