Christina Winterbourne gets video Monday afternoon of the delivery of half of an old bridge her husband, Ian Winterbourne, salvaged from Onalaska, Wash., and plans to restore for their property along Mill Creek. The two sections of bridge will be restored and placed over the creek once their house is completed. 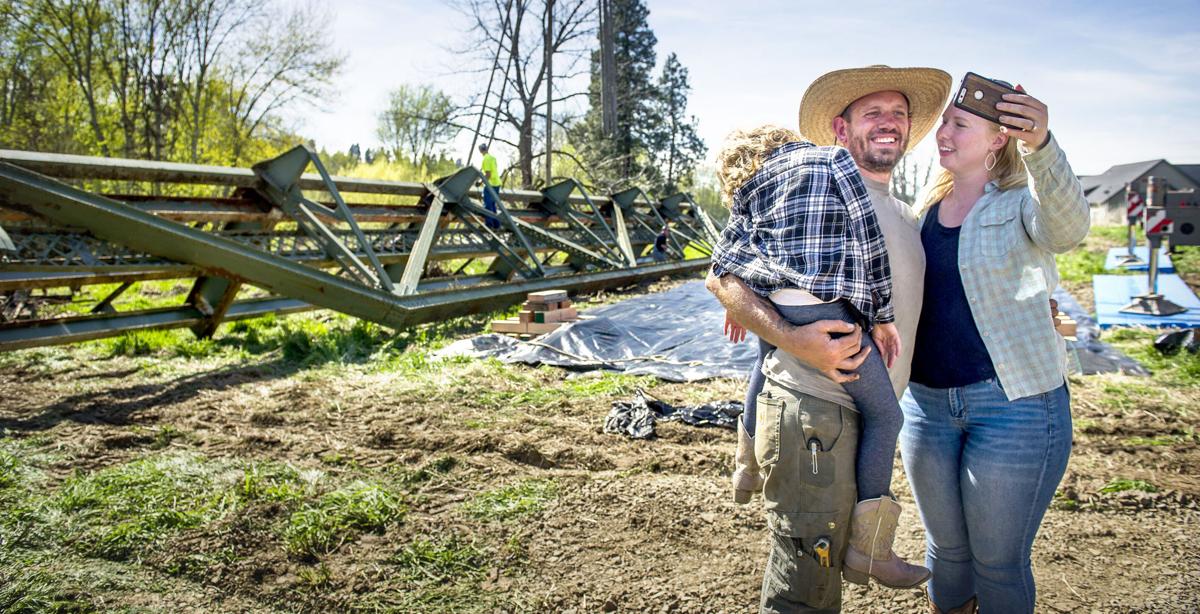 Ian Winterbourne, his wife, Christina, and their daughter, Nora, get a selfie Monday afternoon in front of half of an old bridge he salvaged.

Christina Winterbourne gets video Monday afternoon of the delivery of half of an old bridge her husband, Ian Winterbourne, salvaged from Onalaska, Wash., and plans to restore for their property along Mill Creek. The two sections of bridge will be restored and placed over the creek once their house is completed.

Ian Winterbourne, his wife, Christina, and their daughter, Nora, get a selfie Monday afternoon in front of half of an old bridge he salvaged.

“It’s a little bit of insanity, I think,” acknowledged Ian Winterbourne as he took custody last week of the 92-foot structure that had long spanned the Newaukum River on state Route 508 near Onalaska. “I tend to love projects like this, things that are challenging and will take some time.”

Winterbourne is taking the bridge to his 8-acre property in Walla Walla, where he’ll use it to cross a creek that had rendered half of his land inaccessible. The structure, a steel “pony truss” bridge installed in 1930, was taken out of commission when the state Department of Transportation put in a new bridge, better equipped to handle the heavy-equipment traffic that often uses the route.

A pony truss is a relatively rare bridge that allows traffic through the truss but is not connected by cross braces at the top. It’s not every day the state gives bridges away, and WSDOT spokeswoman Tamara Greenwell said the transfer was the result of a 6-month campaign to find a new owner.

“This is extremely rare,” she said. “We didn’t think we were actually going to identify someone who would re-home it.”

The transition will save both the state and the new owner money. Building a new bridge to cross the creek would have cost Winterbourne 10 times the amount he’s spending to transport and refurbish the old structure. And handing the structure over allows the state to avoid the costs of turning it into scrap metal.

“It saves us from having to pay to haul it before it is scrapped,” Greenwell said. “It needs to be lead-abated and cleaned. A lot of times there are scrapping fees as well. … Because Ian is re-homing it, we don’t have to do that.”

Still, completing the transfer has been an arduous process. Since learning the bridge would become available, Winterbourne has spent about two years working through various regulatory and logistical hurdles to make the move possible. He met with more than 20 local officials, including the U.S. Army Corps of Engineers.

Once he received the official go-ahead, Winterbourne had to contact about 10 transportation companies before he could find one that would haul the bridge. The bridge, cut in half lengthwise, will be transported in two sections that weigh about 40,000 pounds apiece. Once refurbished and reassembled, the bridge will be about 90,000 pounds. About 3 feet were cut out of the middle of the bridge, putting each section just 2 inches below the maximum width allowed to be hauled on a road.

Once the bridge is taken to Walla Walla, it will be left in a field on Winterbourne’s property along Mill Creek, where he’ll spend two or three years getting it ready for installation.

“In that time, we have to strip all of the old paint off, we have to clean all the steel, remove all the rust and repair any damaged sections,” he said.

Winterbourne is well-suited for the task. He has owned a construction company that’s specialties include green building, welding, lead removal and metal fabrication. Greenwell said 12 people applied to take the bridge, but Winterbourne emerged as the obvious choice.

“My wife and I both fell in love with the look of the bridge, we both appreciate the history of it,” Winterbourne said. “The idea of taking something that’s existing and repurposing it so it doesn’t get scrapped is really appealing to both of us. We’re just excited to have a historical structure on our property.”

Winterbourne and his wife have livestock on their land, including goats, and the bridge will allow them to have animals on the back half of their property, as well as get farm equipment and vehicles across the creek. They also were required to ensure the bridge will allow fire department access to get to the land beyond the creek.

While he’s excited about having the structure in place, Winterbourne said he’s also enthusiastic for the work to get it ready. Already, several locals have volunteered to chip and help on the project.

“I’m really excited about the restoration itself,” he said. “It’s beautiful, it’s an amazing piece of architecture. I love the history of it. Rivet construction has always fascinated me. I’ve got a welding degree as well, so it was exciting having the prospect of rebuilding something that otherwise might have been torn apart.”

Once the bridge is complete, Winterbourne plans to throw a party on top of the structure, inviting everybody who helped make it happen.

“We’re looking forward to just hanging out on the bridge, sitting over the creek and just spending time there,” he said. “We’re gonna put lights up along it and make it a feature of the property.”

For the state, it’s sad to say goodbye to one of the last pony truss structures still in operation. But WSDOT leaders are happy it won’t be going to the scrap yard.

“It’s an 80-plus-year-old structure,” Greenwell said. “It is gorgeous, but it’s very old and it’s served Washington travelers for many years. We’re very excited it’s going to have a useful life past its state service.”