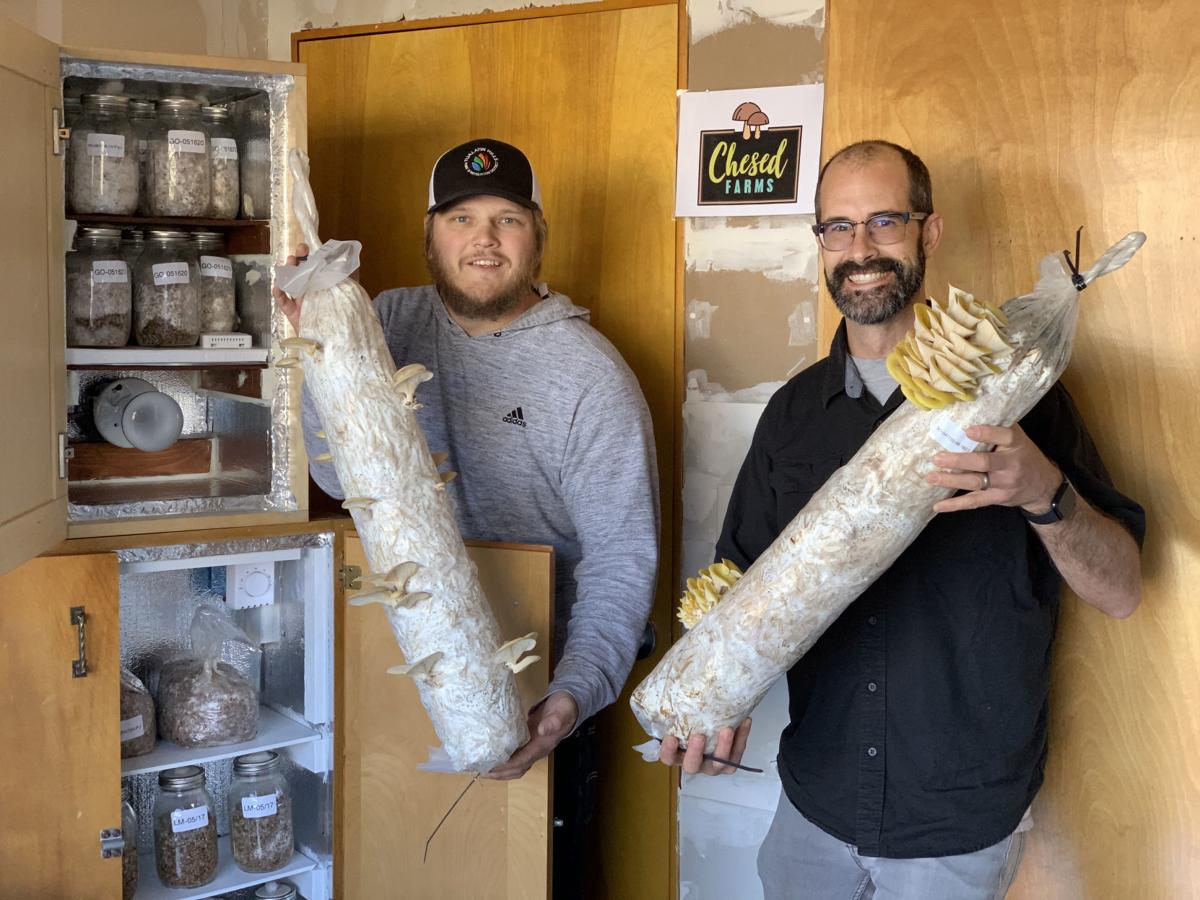 Jonathan Garrett, left, and Sundown Hazen of Chesed Farms with bags of fruiting oyster mushrooms from their new business venture. 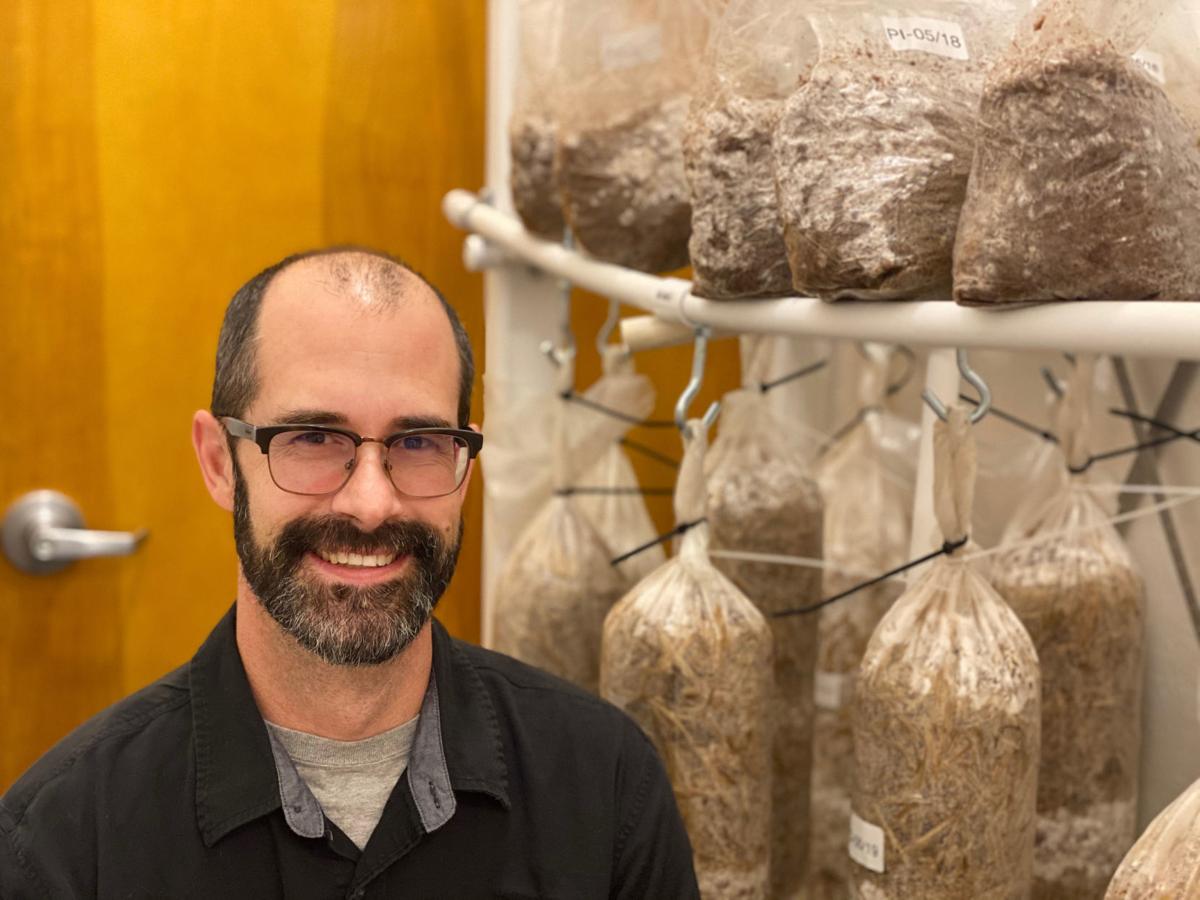 Sundown Hazen with bags of starter mycelium at Chesed Farms. 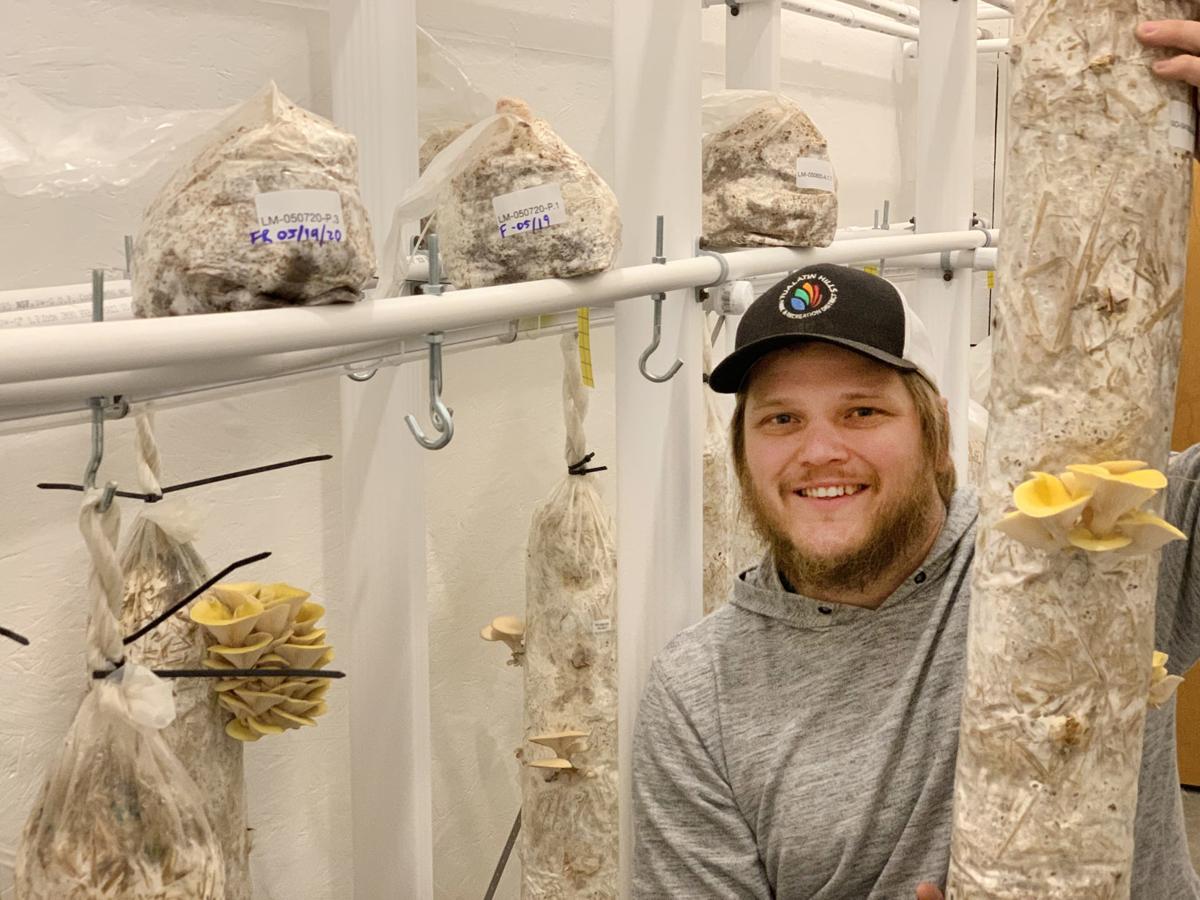 Jonathan Garrett in the middle of the “mushroom fields” at Chesed Farms.

Jonathan Garrett, left, and Sundown Hazen of Chesed Farms with bags of fruiting oyster mushrooms from their new business venture.

Sundown Hazen with bags of starter mycelium at Chesed Farms.

Jonathan Garrett in the middle of the “mushroom fields” at Chesed Farms.

In fact, for the two operators of Chesed Farms the idea sprouted organically, much like the product they’re harvesting — mushrooms.

“In some ways it’s a lot like a mushroom itself,” said Sundown Hazen, 44, of Walla Walla. “It just kinda popped up out of the ground when we were inspired.”

Two weeks ago, Chesed began selling its first rounds of the round fungi “fruits.” But don’t actually call them “fruits” or “plants.”

“At first, we weren’t doing full plantings, if you can call them that,” Hazen said.

“No,” his business partner Jonathan Garrett, 35, of College Place, responded with a chuckle. “You can’t call them that.”

The two plant-life lovers met two years ago during a potluck with Blue Mountain Community Church and immediately became friends.

Hazen hails from the Bay Area in California where he grew a love for aquaponics and other forms of gardening and farming. He helped launch a nonprofit called Schoolgrown and taught kids all about greenhouses, aquaponics and more.

Hazen tended to school gardens in various capacities and spent his free time with his wife and four daughters on their suburban farm complete with turkeys.

The Hazen family moved to Walla Walla two years ago to pursue and apply what they had learned throughout life “in a place that made more sense.”

Garrett has spent his life getting dirt under his fingernails.

When he was younger, he announced at a 4-H meeting that he wanted to be a farmer when he grew up.

“Some guy out in the crowd yelled ‘good luck,’” Garrett recalled. “And so that’s kind of been my, ‘I’m gonna prove him wrong’ (moment).”

Garrett has worked with all types of plant life from landscaping, to fruit trees, to baseball fields.

It was in a minor league baseball field that he began affectionate encounters with fungi.

“I had a mushroom ring growing on the field,” Garrett said. “It was very hard to see, you had to know it was there because it just made the turf a slightly different color ... I named it Daisy; I don’t know why. No one knew it was there but it was my little pet mushroom.”

After Hazen and Garrett met, they knew they wanted to start something together. Their mutual love for growing things was originally going to be realized as a year-round farm, which would have included a mushroom operation.

“Needless to say it was a pretty large idea and pretty intensive to get started,” Hazen said.

So they narrowed it down to mushrooms and began digging into research. They attempted cloning mushrooms they bought at the store but to no avail.

The two say they are men of faith, but their “Bible” during their studies was written by renowned mycologist Paul Stamets, of Olympia, Wash.

The two referred to Stamets’ popular works as the Old Testament — “The Mushroom Cultivator” — and the New Testament — “Growing Gourmet and Medicinal Mushrooms.”

When all else failed, they would consult the “University of YouTube” where plenty of smaller operators have tips and tricks.

Hazen and Garrett found a mycelium supplier they could work with and set up the indoor farm at Hazen’s home.

The mycelium start off in syringes and are injected into hanging bags that are filled with foods the fungi feed on, typically sawdust and straw, which is easy to come by in the Valley.

“In the early days, we check them every day out of pure excitement,” Garrett said.

After one to two weeks, little pinheads begin to form from holes in the bags. The bags are moved from a dark, humid and warm room to a cooler, lighter room for the organisms to complete the inoculation process.

Once the mushrooms mature, Hazen and Garrett are able to harvest the fresh, colorful fungi perfect for sauces, salads, soups, sandwiches and more.

When asked about the benefits of eating mushrooms, the two become giddy.

“It’s so fascinating. Mushrooms, as far as kingdoms go, are the closest kingdom to us as humans. They actually digest food just like we do, but they do it on the outside of their body. They excrete digestive fluids — they break down the things around them and absorb the nutrients they want back into their body.”

The mushrooms can have high levels of niacin and other unique vitamins. Mushrooms are also dense with protein. According to the USDA, just one mushroom can represent 1% of a person’s daily protein intake. Hazen said some of their mushrooms are made up of 14% protein in their dry weight.

Pearl oyster and golden oyster mushrooms are what they’re selling right now. The mushrooms can be found in most stores, but Hazen and Garrett say the difference in buying local is big. The mushrooms are cut straight from the bag and delivered same-day locally.

“People ordering right now are getting mushrooms harvested that day,” Garrett said. He said that keeps nutrients and flavors intact unlike store-bought mushrooms that can sit on shelves for weeks at a time.

One of the next batches will be a stringy looking mushroom called lion’s mane, which according to Hazen and also experts such as Stamets, can help improve cognitive function and memory. It also has a lobster or shrimp flavor to it, which can make it a good shellfish alternative for people with allergies.

Chesed Farms can produce about 50-100 lbs of mushrooms per week right now. Garrett said they’ve just about sold out each week.

The farmers are now able to replicate the fungi and are continuing to clone more and more jars of mycelium from their current product. They hope to expand the operation long-term, including getting into the hands of local chefs.

“We’ve got this very beautiful, and hopefully soon-recovering tourism and food economy here that we think we’re gonna be a really great fit for,” Hazen said.

For now, Chesed mushrooms will be on sale on their website, chesedfarms.com and at the College Place Farmers & Artisan Market, this Thursday, 4-7 p.m.